West Indies - The dream that got diminished

West Indies - The dream that got diminished

The West Indies have won the World T20 twice in the last three editions. It is the only team to win the trophy twice since it came into existence in 2007.

Conversely, the West Indies have not qualified for the fifty-over World Cup semi-final since 1996 – that is, in the last 6 World Cups. Once a power house of cricket that won two consecutive World Cups and reached a third successive final, West Indies is now at the bottom of the pile – so much so that their abysmal ODI ranking meant they had to play the qualifiers to gain entry into the 2019 edition. And now they leave with just two wins in nine games - the least number of games they’ve ever won in a World Cup.

Affability is the word one associates with the West Indies sides that dominated world cricket in their heyday. They wore a smile that reflected a love for the game, not mockery of the opposition. They drew their fans into their flamboyant style and unique celebrations – and the goodwill those teams garnered remains embedded in our collective psyche. When they do well, it makes you feel good, irrespective of your country of origin.

That is why when the West Indies showed glimpses of their fast bowling prowess in their first Cup match against Pakistan, bundling them out for the second lowest score in World Cup fixture, and then put up a spirited fight against defending champion Australia in the next match, their legion of fans began hoping this is the year they get back to peak ODI mode. The dream was short-lived, though – after those two games, it has been downhill for the West Indies barring flashes of individual brilliance.

Ironically, the T20 format that has won laurels for the West Indies, and made their players the hottest tickets in leagues around the world, has played a significant role in their decline in the longer formats.

Twenty20 cricket has contributed immensely to developing the quality of ODI cricket. The mindset of players has changed; they are now prone to taking greater risks and trying different variations in batting and bowling. But adaptability to match situations, such an integral part of ODIs, is an aspect the West Indies team is yet to learn.

Individual brilliance or a freak performance at the right moment can derail the opposition, and take the team home, in the shortest format of the game. Marlon Samuel’s 78 off 56 in Colombo in 2012, and Carlos Brathwaite’s 4 consecutive sixes in Kolkata in 2016, helped the West Indies win two World T20 titles – but it takes more than short-lived brilliance to win ODIs.

The essential difference lies here: When a team has only 20 overs, a flash of brilliance like, say, a batsman taking four, five boundaries in an over off a particular bowler, can become a match-winning performance. However, when the game extends to 50 overs, the opposition can absorb such shocks, and work towards regaining control. The Windies appear to have not understood this fundamental fact – thus, they approached the World Cup like they would a T20, banking on flair but neglecting the discipline needed to do well in the longer format.

Between the 2015 and 2019 World Cups, the West Indies squad members played an aggregate of 413 Twenty20 matches, behind India (584) and Pakistan’s (536). Playing more Twenty20 cricket did not affect India’s ODI performance; rather, many players made it to the national ranks because of their performance in Twenty20 leagues.

That this did not hamper India’s ODI form is indicated by the fact that the team won 65% of their ODI matches between the two World Cups. Against this, the West Indies won just 27 % of their ODIs, the joint least win% in the same period among all World Cup teams. Clearly, it is not talent but application and adaptability where West Indies lost out to other teams in the longer format -- and this is true not only in their performance in this World Cup, but also in the overall decline of their ODI side.

The West Indian opening duo Desmond Haynes and Gordon Greenidge, who last played together in 1991, held the record of the most prolific opening pair in the format (5150 runs at an average of 52.55) till about 2001 – that is, even after the advent of powerplays and power hitters in the 1990s. But since then, no opening pair from the West Indies have touched the aggregate 2000 runs mark.

That said, 2019 marks a new low. Never in the 12 editions of the World Cup have the Windies openers scored so poorly as in this edition, where the openers have scored 99 runs in 8 innings with a best partnership of 36, contributing a meagre 6% of total team score. This is the 2nd consecutive World Cup where West Indian openers have not had a 50-plus partnership. Compare those numbers with that of the top four teams, whose openers have scored at an average of 63 and contributed 22% of the total team runs, and you begin to see the crux of the West Indies’failings in this tournament.

The one warm-up match the West Indies played before the tournament proper was against New Zealand, where they were bowled out for 421 in the 50th over. Shai Hope, who scored 100 off 86 deliveries, scored 60% of his runs in boundaries. He then went on to say the West Indies have the firepower to be the 1st team to score 500 in an ODI.

They were not alone – many teams came into this competition expecting that scores in excess of 350 would be the norm. The difference is that once the other teams found out, early on, that inclement weather and wickets with life in them inhibited free strokeplay, they reined in those ambitions and rethought their strategies; the West Indies, however, continued to play as though they had 400 in their sights in every game, and consequently paid a heavy price.

This point is highlighted by the fact that in this World Cup, the West Indies have lost a wicket for every 30 runs, which is 3rd cheapest price per wicket among all teams. Also, 56% of their runs have come in boundaries – the highest by any team. Taken together, those two sets of numbers permits only one conclusion – the West Indies game plan was entirely based on expansive shots – far from ideal on the types of wickets we had in the first half of the tournament.

Alongside this, strike rotation has been a critical issue for the West Indies who, in this World Cup, sacrificed running and opted to just stand and deliver – a strategy that works in T20s, but not in the longer format where bowling teams use pace-off, pack one side of the field, and curtail a batsman’s ability to hit every ball out of sight. When it comes to rotating strike, the West Indies are by a distance the worst team in this competition.

None of this is to suggest that lack of opening partnerships and absence of strike rotation were the only reasons for the Caribbean implosion – team selection, an over-reliance on a clearly injured Andre Russell, lack of penetration in the middle overs and wicket-taking ability at the death with the ball… the laundry list of issues the West Indies faced in this tournament could fill a book.

And then there are the external issues – between this World Cup and the previous one, the West Indies had probably its most inept board in history; this in turn led to constant conflict between the board and the players. Allied to this was a situation where, ironically because of their T20 skills, Windies players found themselves much in demand in T20 leagues around the world and, lured by the money on offer, began to pick and chose when they would make themselves available for national duty. This led to a situation where, for a big tournament, the star mercenaries would congregate like members of a disjointed family assembled for a funeral.

In 2015, when England had a shambolic World Cup, its management and senior players went back to the drawing board and rethought strategy, came up with a long-range plan, and implemented it rigorously over time – with the result that England, now the hosts, are strong favourites to lift their first-ever Cup.

The West Indies need to take a leaf out of England’s book; the management and players need to come up with a long-term plan for the longer format. As they say in business circles, the mantra for success is: Plan the work, then work the plan. And the Windies need to do it now, for time is running out – it is one thing to say the Caribbean cavaliers have goodwill in the bank, but if they keep squandering it with this kind of shambolic performance, that bank balance will diminish, the fans will disappear, and that could be the death knell for a team that once was the world leader in the format. 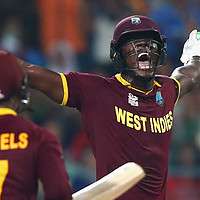