West Indies vs Pakistan – Unpredictability is the name of the game

West Indies vs Pakistan – Unpredictability is the name of the game

West Indies face Pakistan in the second game of the 2019 World Cup at Trent Bridge, Nottingham on Friday.

If this was a football match, people would have termed it the “Unpredictable Derby”. Such is the nature of these two sides that it’s tough to forecast where they will finish at the end of the tournament.

Despite not being considered one of the favourites for the World Cup, Pakistan will take heart from the 2017 Champions Trophy where they defied the odds to come out on top. In fact, Pakistan’s sole World Cup triumph in 1992 also came when everyone had written them off.

On the other hand, there’s the West Indies. A dominating force in the game during the early years of the World Cup, the Caribbean team will be keen to show that there’s more to their cricket than just T20 – a format they have dominated in recent years.

While Pakistan come into the mega event on the back of a humiliating 0-4 loss against England in an ODI series a few weeks ago, the West Indies gained some valuable confidence after their 2-2 draw against Eoin Morgan’s side who are ranked at the top in ODIs.

If West Indies have to do well at the World Cup, at least one of Chris Gayle and Shai Hope, if not both, have to play a big role. One gets an idea of just how crucial the duo are to this line-up by looking at their contribution to their team’s totals over the last 17 months.

Since 2018, Hope has scored 21.3% of the West Indies’ runs in ODIs. Gayle, on the other hand, has just played five ODIs during this period, but when he does play, his team’s reliance on the ‘Universal Boss’ is no less. The left-hander has contributed 21.2% of the team’s total in those handful of matches.

Over the years, most of Pakistan’s success has come on the back of some magnificent bowling attacks. On paper, the names here might not match up to the ones from previous generations, but the West Indian batsmen will be aware that they can’t take things lightly.

Gayle, especially, hasn’t quite figured out the Pakistan bowling puzzle. In 34 matches, the 39-year-old has scored just 944 runs at an average of 27.8 against the Men in Green. The other West Indian batsmen don’t have records to be proud of either against Pakistan. 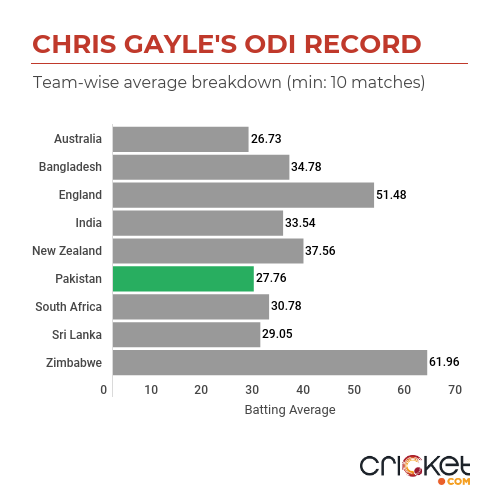 A lot of eyebrows were raised when Wahab Riaz was drafted into the Pakistan squad and one wonders if it had a lot to do with his record in the previous two World Cups: 24 wickets in 12 matches at 21.9 runs per scalp. Whether it proves to be a masterstroke or an uninspiring selection, only time will tell.

Imam-ul-Haq and Fakhar Zaman have been among the best opening pairs around, with four 100+ partnerships since 2018. Interestingly, during the same period, when they put on a 50+ stand, Pakistan have won eight out of nine games. The win rate falls to 36% when they fall before scoring 50 together.

However, Babar Azam still is the lynchpin of the Pakistan batting line-up. With an average of over 50, the 24-year-old’s form will be pivotal to the fortunes of the Asian team at the World Cup.

Something that will boost the hopes of the Pakistani contingent is the fact that Babar has scored four centuries from just six innings against the West Indies in ODIs so far. Another encouraging trend for Sarfaraz Ahmed’s men is that Babar has consistently improved in England over the last few years.

In his first tour to England in 2016, the right-handed batsman managed just 122 in five matches, scoring 24.4 runs per dismissal. In the Champions Trophy that followed, his average was almost double at 44.3 and in the recently concluded ODI series against the hosts, he managed to score at an average of 55.4 and a strike rate of almost 100.

Pakistan will also be buoyed by West Indies’ poor bowling record over the last year or so. Since 2018, the Windies have the poorest economy rate (6.3 runs per over) in 50-over matches between the top 10 teams.

Chances of rain at Trent Bridge are not high and considering the average score batting first here since the 2015 World Cup is a massive 361, you shouldn’t be surprised if it’s a high-scoring contest on Friday. The team winning the toss is likely to bowl first as the last four ODIs on this ground have been won by the team chasing.

Andre Russell has played just two ODIs since the last World Cup, yet the Windies selectors decided to pick the mercurial all-rounder in the squad. It could turn out to be an inspiring selection if his recent form in the Indian Premier League and the warm-up matches is anything to go by.

Shadab Khan’s return to the team after missing the recent ODI series against England, where they struggled with the ball, will be a big boost to the Men in Green.

ANALYSIS
Caribbean chin-music floors Pakistan
At a ground where the average first innings score is over 300, Pakistan was bowled out for a mere 105