What to expect on Day 2: England’s pace veterans against fairly inexperienced Kiwis on a cloudy day 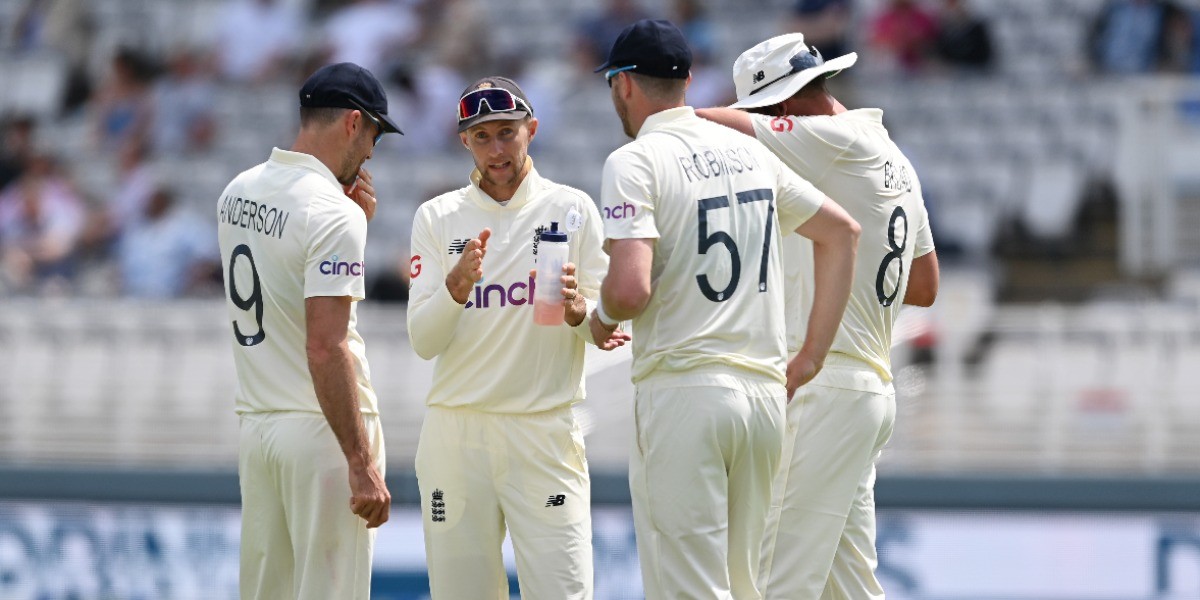 What to expect on Day 2: England’s pace veterans against fairly inexperienced Kiwis on a cloudy day

On a gloomy day that saw some scattered sunlight as the game progressed, England skipper Joe Root won the toss and chose to bat first. After a promising start in the first session where they didn’t lose a wicket, England were at the helm. But, Matt Henry struck in the first over and triggered a collapse as they went three down within a span of five overs after lunch. Just like the first innings of the first Test match, Burns stood his ground to steer them through. Lawrence accompanied him and both saw through the second session. Burns fell in the third over of the third session. However, the number eight – Olly Stone 20 (52) – and number nine – Mark Wood 16*(58) – batsmen were in support of Lawrence and England managed to play out the whole day, which looked obvious at Lunch but out of reach after Tea.

The 18000 present in the stands in Birmingham made us forget about the new normal after a long time. Their presence will make it even more interesting when on the second day, English bowlers will steam through. Here are few things to watch out for on Day 2:

For the majority of the day, the overhead conditions were gloomy. But, in the last hour of the day, there was bright sunshine. The second day’s weather conditions will be somewhat similar to the first day. There might be a chance of an odd outbreak of rain and then Sunshine is expected as we head towards the evening.

Can it be a batsmen’s day at Edgbaston on Day-2?

In Tests since 2016, Edgbaston has witnessed four matches prior to the current one. In those four matches, batting hasn’t been a difficult feat on the second day. Though the scoring rate has been on the slower side, the second slowest across the five days, the batting teams have prevailed without losing many wickets. On average, six wickets have fallen on the second day, only on the fourth day it has been lesser (5 wickets/day). Wickets have fallen at a balls wickets ratio of 73.8 and runs/wicket ratio of 36.9.

Will the tail wag till Lawrence gets to his maiden century?

Following a duck in the first Test, Lawrence made a good comeback in this Test. Lawrence was on 20 when he saw the back of Burns for 81 and 26 when James Bracey was packed off for a first-ball duck. Post that, alongside the tail-enders, Lawrence added 40 more runs to his kitty. To his luck, the lower order batsmen have provided some resistance. He had a 47-run partnership with Stone for the seventh wicket and an unbeaten 36-run partnership with Wood for the eighth wicket. With 33 runs for Lawrence’s maiden Test century, the tail needs to support like how they did for Burns in the first Test.

The newbies vs the experience of Anderson and Broad

Even an experienced player like David Warner has nightmares about Stuart Broad. If Broad is somehow negotiated, one of the best pacers in the world James Anderson will be tailing behind. On the other hand, in New Zealand’s top seven, apart from Tom Latham, Ross Taylor and Henry Nicholls, none of the other four batsmen has played more than 15 Tests. The cricketing world’s deadliest bowling duo in these conditions against an inexperienced top-order of New Zealand is a feisty contest to watch out for on the second day.

Will Devon Conway continue his domination?

Undeniably, Conway’s debut is one of those matches any cricketer would cherish throughout his career. However, in the absence of Kane Williamson and BJ Watling, can he continue his dominance on a pitch that has a bit more for the bowlers than Lord’s? Even though being the senior pro, Ross Taylor’s record in absence of Williamson has been demoralizing. In the last five years, Williamson has missed four matches for New Zealand and Taylor has averaged 18.6 in those four. This certainly adds more weight on his shoulders to perform.