Win the toss & chase to win, flurry of wickets in PP, Dubai’s dual nature and many more 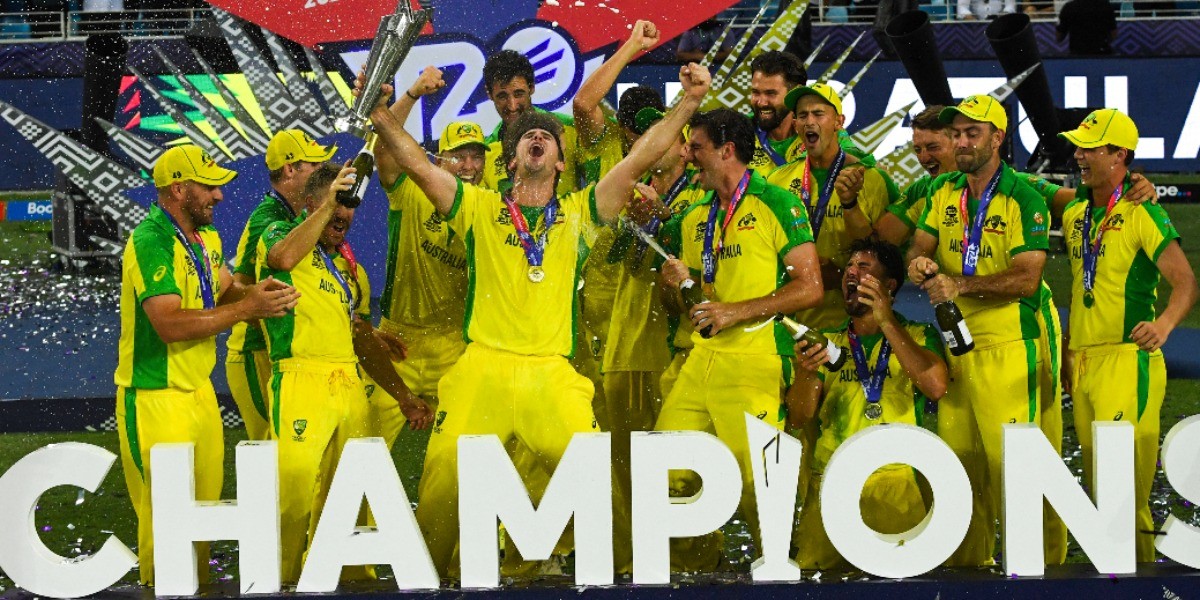 Win the toss & chase to win, flurry of wickets in PP, Dubai’s dual nature and many more

The wait for the start of the seventh edition of the international marque event in the shortest format of the game was a long one. In the first four years since the inaugural edition of the T20 World Cup in 2007, the event took place thrice (2007, 2009 & 2010). Later on, the ICC decided that it would conduct the event once every two years. Hence, in 2012, 2014 and 2016 the next three editions happened. However, there was a long gap of five years between the sixth and the seventh edition.

In case you aren’t an Indian fan, the long wait wasn’t a disappointment. The first round of the T20 WC 2021 kicked off from 17th of October and the Super 12 stage started from the 23rd. In total, 42 matches were played in the league stage. The hosts of this World Cup India, were knocked-out in the leagues stage as Pakistan, New Zealand, England and Australia advanced to the Semi-finals. New Zealand beat England in the first Semi-final and Australia beat Pakistan in the second to set up the summit clash. Australia in their second T20 WC final and New Zealand in their first final appearance, were in hunt of their maiden title. Australia with a comfortable win, got their hands for the first time on the coveted trophy. Throughout the edition, there were few interesting stats and patterns that lit the tournament and here are few of those:

In any format of the game, winning the toss is a very crucial factor as it allows the teams to play to their strength. In this edition of the World Cup, toss has been one of the biggest factors. In 45 matches, teams winning the toss have won 30 matches, which is 66.6 percent of the matches. In no other edition of the T20 WC has a team won as much percentage of matches as this edition after winning the toss. To enhance more, teams had chosen to field in 32 matches out of the 45 and had won 71.8 percent of the matches, which is also the most in an edition. 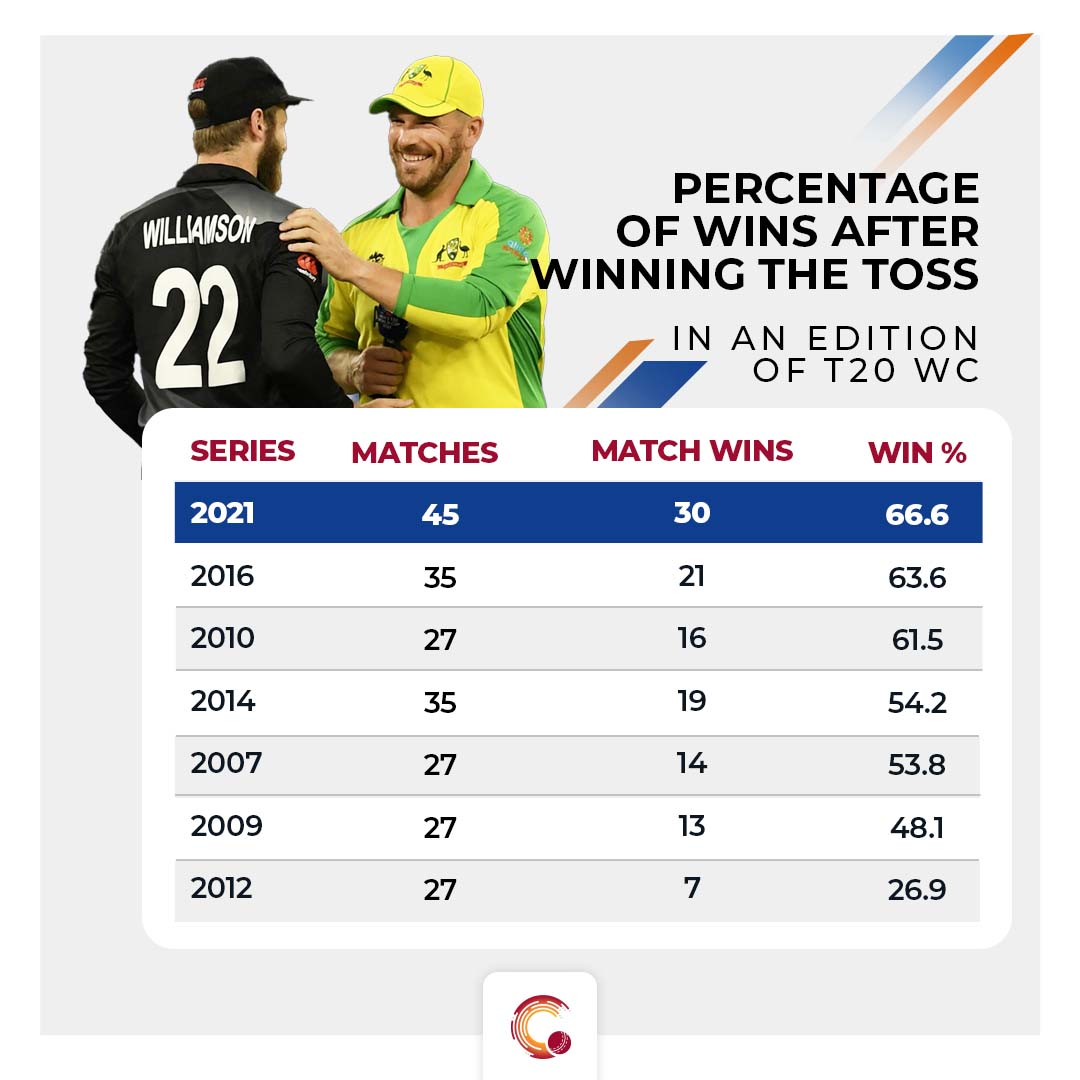 Chase to win – the mantra to success

Throughout the season, chasing was the most preferred option for all the teams apart from Afghanistan and Bangladesh. The champions Australia won six matches in total this edition and all six of those came when they chased. The only matches they batted first, they lost. Not only them, India (2), New Zealand (3), Pakistan (3) and South Africa (3) all had a 100 percent win record when they chased. In this edition, 29 times teams chasing won out of 45 played, which is 64.4 percent of wins through chase. This is the most number of wins through chase in an edition. The win/loss ratio of 1.81 while chasing is also the highest in an edition of the World Cup.

The number of wins in chases have been high because of the failures from teams batting first. Throughout this season, Sharjah saw the highest average first innings total - 150 and Dubai the lowest – 130. Overall, on an average, teams have scored 143 in the first innings. Only once a team breached the 200+ total barrier and that was India against Afghanistan. In fact, in the first half of the tournament, that is till 31st of October, the average first innings total was even lower – 135. Few scores of above 170 in the second half saw a bit of rise. Though, the overall first innings average score of 142/7 is the lowest in an edition of T20 WC.

Wickets up top / Wickets inside the powerplay 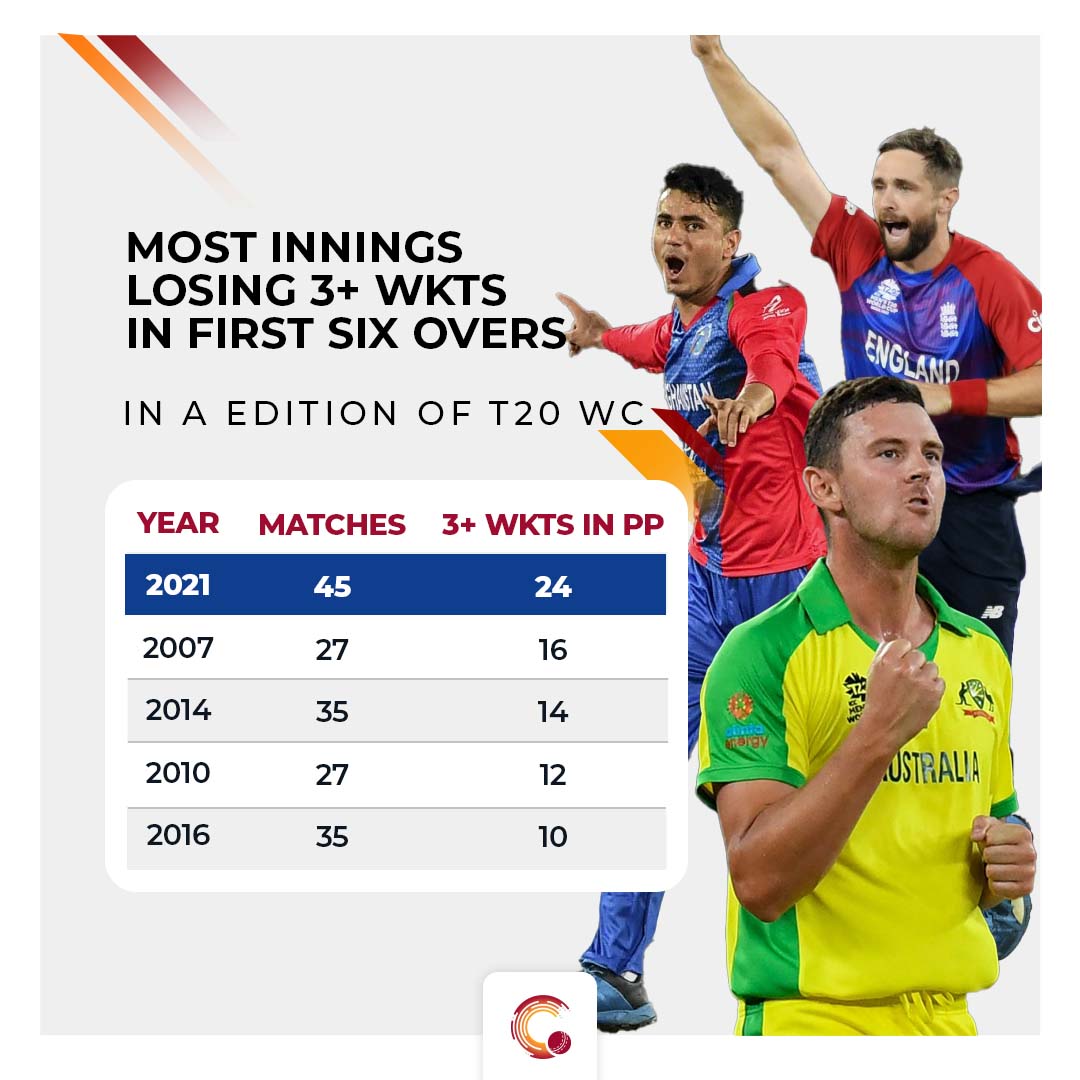 Dropping catches are part and parcel of the game, but dropping them at crucial junctures like the last five overs can be decisive. None better than Hasan Ali of Pakistan can explain this. Though Matthew Wade scored only 18 runs, the impact of that drop by Hasan in the 19th over was 100 times more. Not only that, in the innings in which Shoaib Malik scored the fastest half-century for Pakistan, Michael Leask of Scotland dropped a catch in the 19th over and Malik scored 26 runs of the last over. Overall, there are 87 drops this season and 29 of those have been dropped at the back end of the innings, which is 33.3 percent.

Despite a thumping win against Indians in their first encounter, their first win against India in World Cups, Pakistan middle order batsmen weren’t tested and that happened against New Zealand in their second game. Since their second match, Pakistan had found a winning combination and they didn’t tinker with it. Throughout the edition, they went with the same playing XI. Hence, they became the third team in a World Cup edition to feature only 11 players after playing five or more innings. West Indies in 2014, played an unchanged XI through their five matches and Netherlands in the same edition featured the same XI for seven matches. 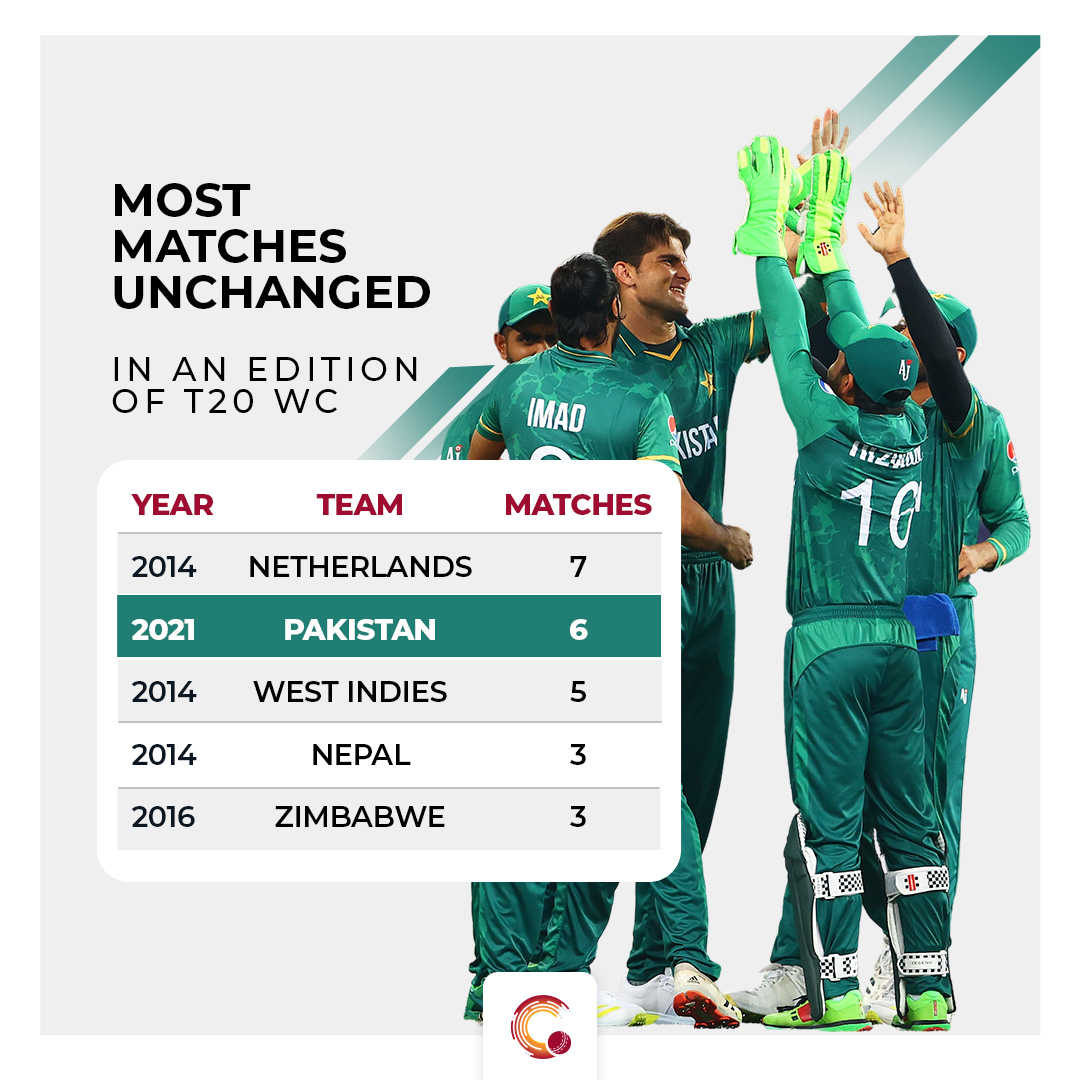 The unique nature of Dubai

Among the four venues for the T20 World Cup 2021, the Dubai International Stadium was one of those venues which followed a unique pattern. In the 13 matches played, 12 times teams had elected to field first and won 11 of those matches. Overall, 12 matches were won by the chasing side out of the 13 and New Zealand against Scotland were the only team to win after batting first. First innings batting was the most difficult feat at this venue and 130 being the average first innings score is a testimony of it. Only three times teams scored 170+ in the first innings. 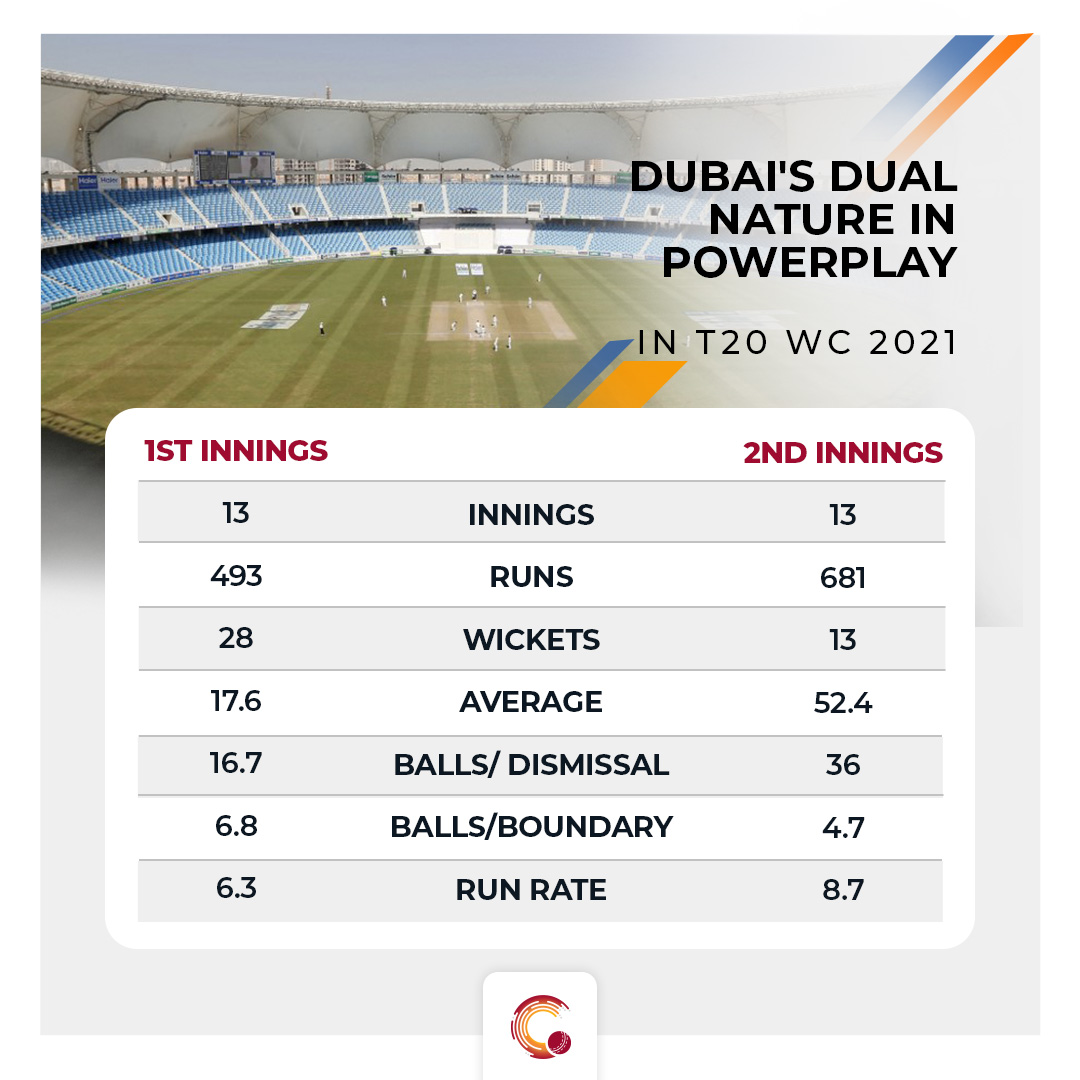