Mark Wood said he felt like he was in a science fiction film after entering England's bio-secure training 'bubble' ahead of next month's Test series against the West Indies.

Durham fast bowler Wood is one of 29 England cricketers currently at Hampshire's Ageas Bowl, the venue for the first Test, all of whom have produced negative results in an initial round of coronavirus testing by the England and Wales Cricket Board.

The series will be played behind closed doors in a bid to reduce the risk of players contracting COVID-19 and officials are doing all they can to ensure the players remain virus free.

This has included changing the original venues to the Ageas Bowl and Old Trafford, both of which have onsite hotels, for what will be cricket's first major international series since lockdown.

"The temperature check (upon arrival) was weird," said Wood during a conference call on Wednesday.

"You walk through a tent and they tell you you're all right. I don't know what happens if you are not all right.

"It is a bit like a sci-fi movie. Everybody has masks, you don't know if they are friendly or not.

"Meals are strange as well, everyone has their back to you and sits on separate tables. This morning I had breakfast and looked at the back of Jos Buttler's head.

"You have to follow arrows and feet marks everywhere (at the venue); it's like a channel one way and a channel the other."

Meanwhile Wood hopes his blistering burst in St Lucia last year will have imprinted itself on the West Indies just as surely as hostile spells from Australia fast bowler Mitchell Johnson left their mark on many an England batsman.

Wood took five wickets for 41 runs, his maiden five-wicket haul in Test cricket, during an England consolation win that meant the West Indies won the series 2-1.

At times he topped speeds of 95 mph, rivalling Johnson's pace if not the retired left-arm quick's 37-wicket return during the 2013/14 Ashes.

It was the start of a successful period for Wood, whose career has been blighted by injuries.

Asked if his St Lucia exploits would make the West Indies wary, Wood said: "I think it's natural.

"It's like Mitchell Johnson in that away tour; before the 2015 Ashes we had a big chat about him. It's actually quite nice to think they might do that about me, which is a bit weird."

But while England are getting ready to return, the amateur game remains on hold after British Prime Minister Boris Johnson said Tuesday a cricket ball was a "natural vector of disease".

"Being a non-contact sport, there must be something they can do around the ball," the 30-year-old said.

"We don't want to miss out on the next Ben Stokes, Joe Root, Jos Buttler or Jofra Archer." 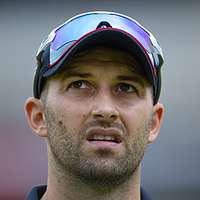