5 Questions every RCB Fan wants to know from Criclytics! 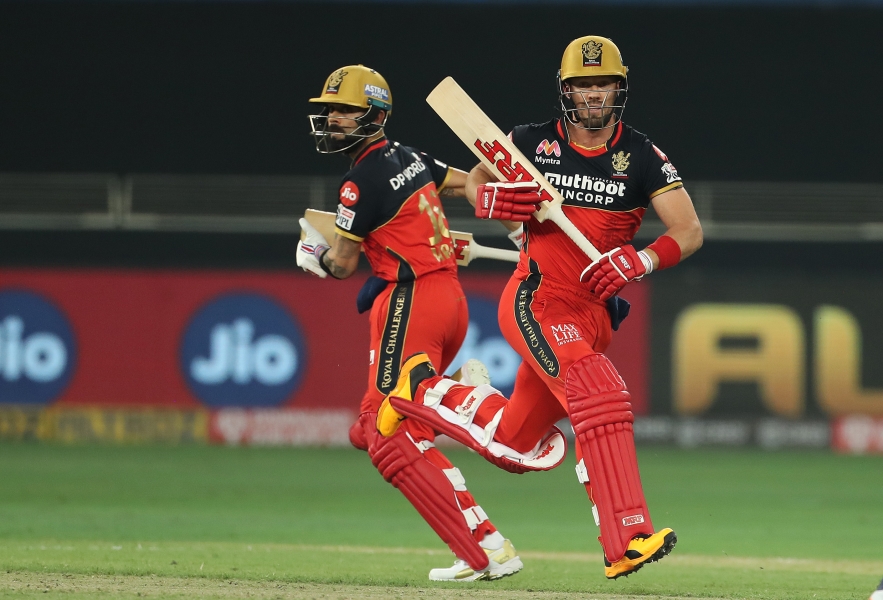 5 Questions every RCB Fan wants to know from Criclytics!

Join us on a number-driven cricket narrative of match 3 of IPL 2020, through the eyes of Criclytics

The 3rd game of the IPL 2020 brought out enough narratives and questions for RCB fans, and we try to take a look at it through the lens of Criclytics

• Padikkal and Finch! Are they RCB’s Calm before the ‘AB+VK’ Storm’?

• The Umesh Condundrum. Where do you use him?

• Decoding ‘The Saini and Chahal Heist

A) Padikkal and Finch! RCB’s Calm before the ‘AB Storm’?

A drought ridden land had received its first rain in a few years, or that’s how RCB fans felt when Devdutt Padikkal, found his way to a 50 on IPL debut in their season opener. A young star was born, and his electric start at the top of the order, did a lot to maintain the win% momentum from the start of the game. Criclytics rated RCB to have a win% of 60 from the start given that Padikkal was expected to play well and set the base for ABD and Virat. SRH being without Nabi meant that their bowling resources were largely untested despite the variety a recent left-arm orthodox and a left arm pacer (making his debut for SRH) brought to SRH.

Padikkal and Finch did well to stabilize and target bowlers in the first 10 overs, leading to them maintaining their win momentum which started at 59% win probability when they came into bat.

Their ‘floodgates open’ moment was in the 4th over, when SRH would could have created a little more pressure against Padikkal and Finch by getting an experienced bowler. Having Natarajan (playing his first IPL game since 2017) bowl to Padikkal (who was quite the rage in the local Syed Mushtaq Ali Trophy), meant that 3 boundaries were leaked on the shorter side boundaries, and RCB got it’s mojo to motor along.

The openers paced their innings well. Out of 10 overs, they had 5 (25 runs) quiet overs and 5 big overs (61 runs). The classic strategy of making it count in those few big overs. 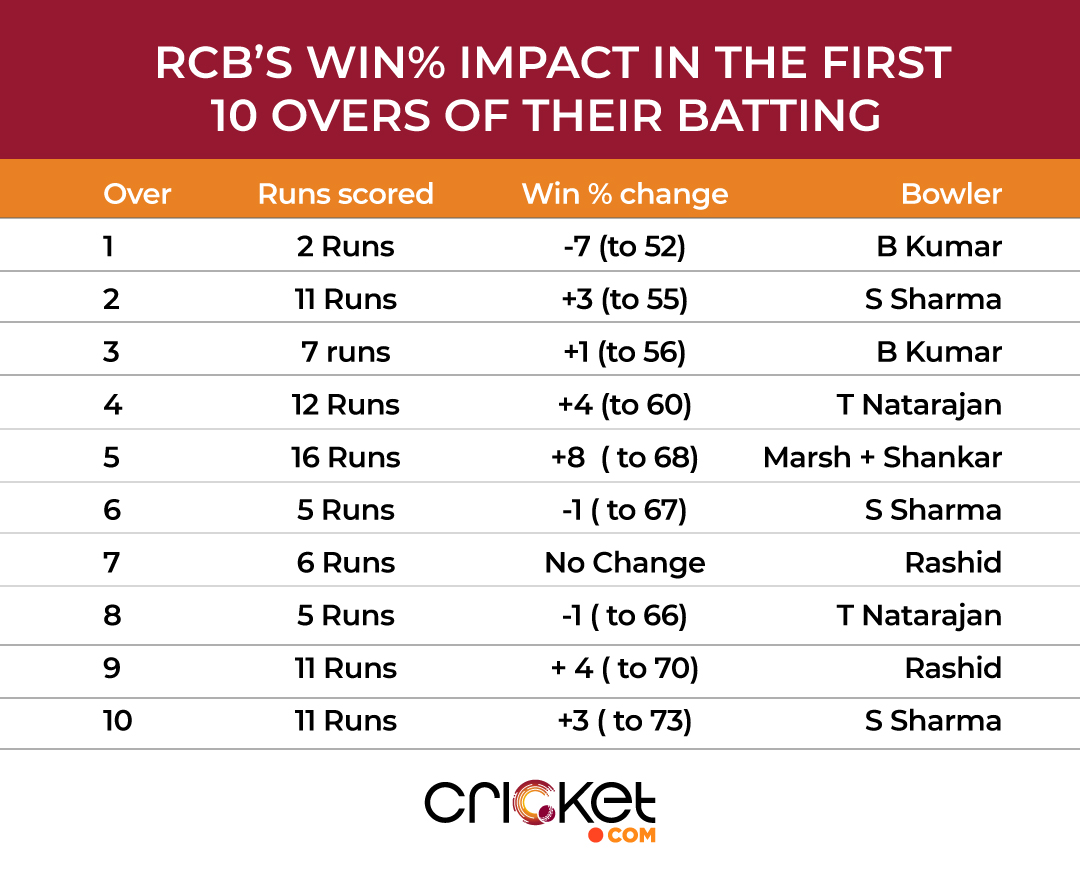 B) The Quest for 160. Risk Free Cricket from AB and Virat to get there?

Once Virat Kohli strode in to bat, after the twin wickets of Finch and Padikkal in successive balls, one expected him to take a couple of balls to settle in and then target the bowlers. But what one got to see was a Virat, who was content trying to find the gaps and singles on offer, to the point that as an RCB fan, you felt if there were enough on the board during those slow moving middle-overs.

Interestingly given the nature of the opposition attacks have not changed by much, Virat’s numbers in the last 2 IPL’s against SRH were not great and it was his second lowest average against an IPL team, and for good reason. 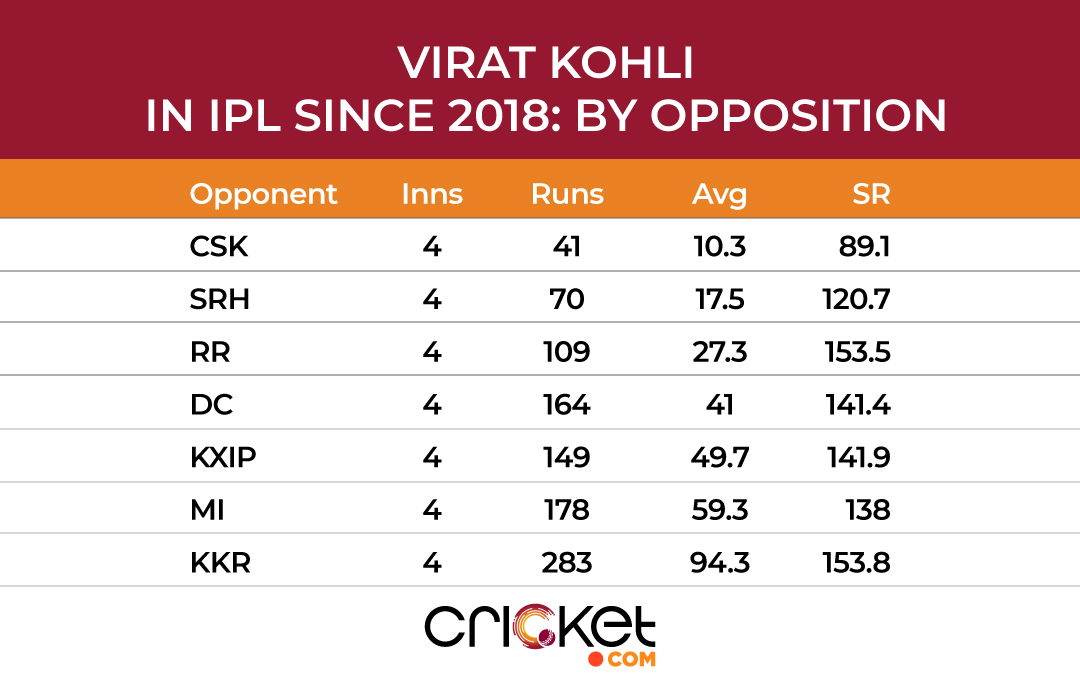 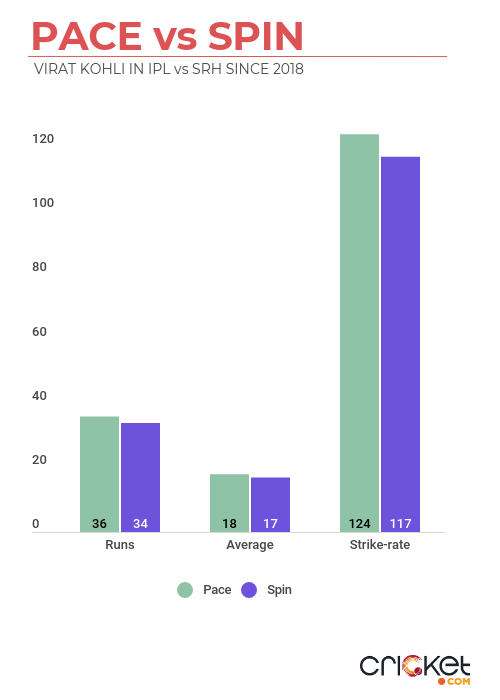 As Virat came out to bat, it was evident that there would be 2 overs of Rashid Khan at him, apart from an over of spin. Virat chose to let the momentum go down, prioritizing stability to have wickets at the death. So from the time Virat entered to the time he left, he made sure their momentum never got hit and maintained it almost the same level of 60-61% win probability for RCB

SRH tried their best to throw 2 overs of Rashid Khan, but VIrat found a way to score risk free singles of his over, without allowing any dot ball pressure to accumulate. Given Sandeep Sharma had a good match-up against Virat, prior to this game, they even employed an over of Sandeep strangely during the middle-overs to price him out, but to no avail.

Virat’s risk free approach was probably a calculated strategy to take baby steps in the tournament and do it well. It seemed to be a strategy that RCB wanted to consciously go after, prioritising the importance of at least getting to 160 (as told to Royal Challengers TV), given the number of times they derailed in the last couple of seasons batting first. 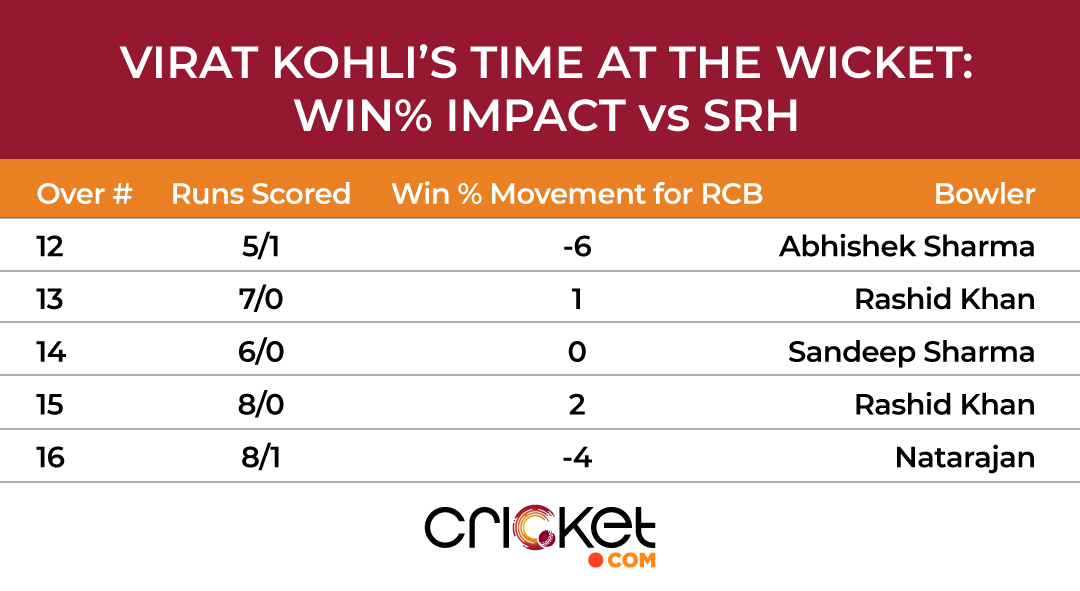 After Virat’s wicket, ABD also tried use the tactic of getting one boundary per over and collect singles from the rest of the balls.

ABD’s run scoring against spin came under the scanner in the last 3 years at the IPL, and SRH did well by not giving him enough pace to deal with. ABD though was content trying to work his way, risk free, with the single minded goal of reaching ‘Peak 160’, with a boundary an over.

Could this be the new RCB template to get points on the table, assuming their death bowling is sorted? 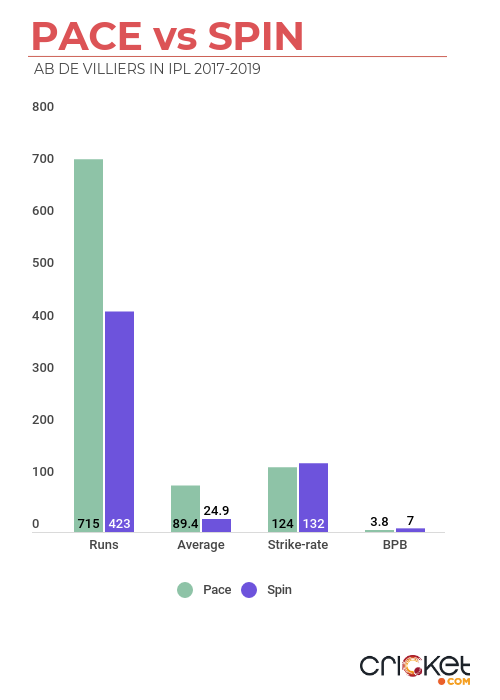 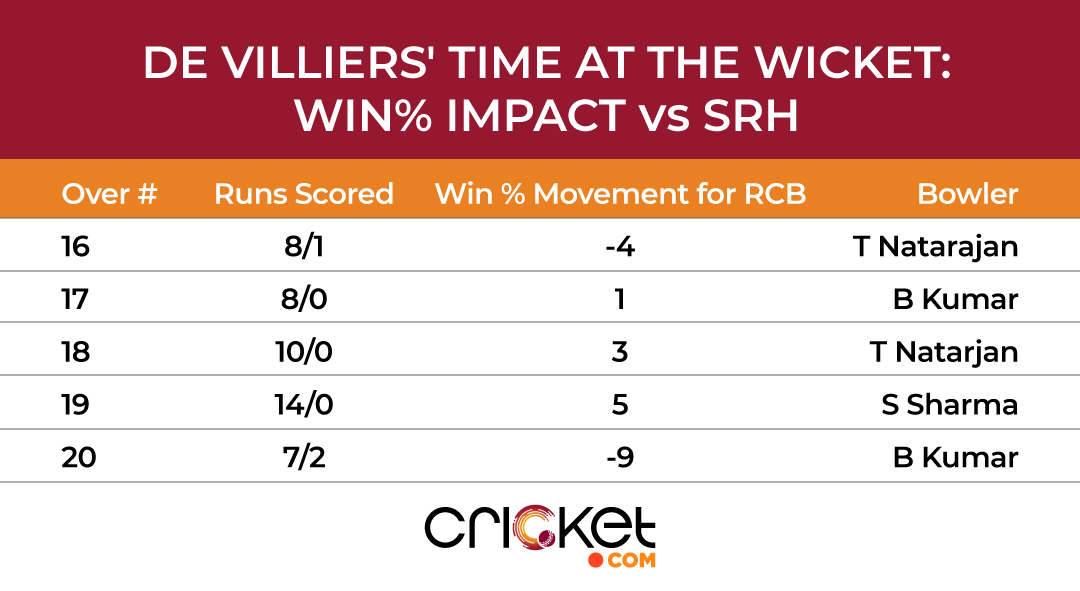 C) The Umesh Conundrum. Where do you use him?

As a senior bowler in the side, he had marginal returns while bowling for RCB off late. His bowling was a complete let down as whenever he came on to bowl, he reduced RCB’s win% chances by a fair margin as shown below.

His first over brought a 16% win probability change against RCB was nullified by his ‘Hand of God’ run out of David Warner. His other overs he was guilty of bowling at the pads or short enough to score runs.

The 14th and 15th overs by Umesh and Steyn cost RCB 27 runs and reduced their win probability by 22% ( 46% to 24%). Steyn and Umesh being off colour, almost cost RCB the game before Chahal, Saini and Shivam Dube helped them stage a remarkable heist.

Navdeep Saini was primarily used in Powerplays last season. The more one sees him, one is convinced that he can be an effective bowler with his seam position, hitting the deck at the end overs, and the RCB team management used that tactic to good effect.

Saini’s 3 inexpensive overs, kept the momentum with them for 2 of his 3 overs. Saini’s 3rd over was sandwiched between Chahal’s 2nd and 3rd over and together there was a period of play (Overs 10,11 and 12) where the momentum shifted towards RCB from 32 to 44 with the all important wicket of Manish Pandey.

They came back again along with Dube to deliver 4 overs of high impact (Overs 16 to 19), where RCB made deep inroads and SRH set the self-destruct button on. 25/7 in 24 balls, resulted in a win% impact swinging from 22 to 98.

The trio's combination and overs also makes it to our Criclytics Top 4 'Game Changing Overs.' 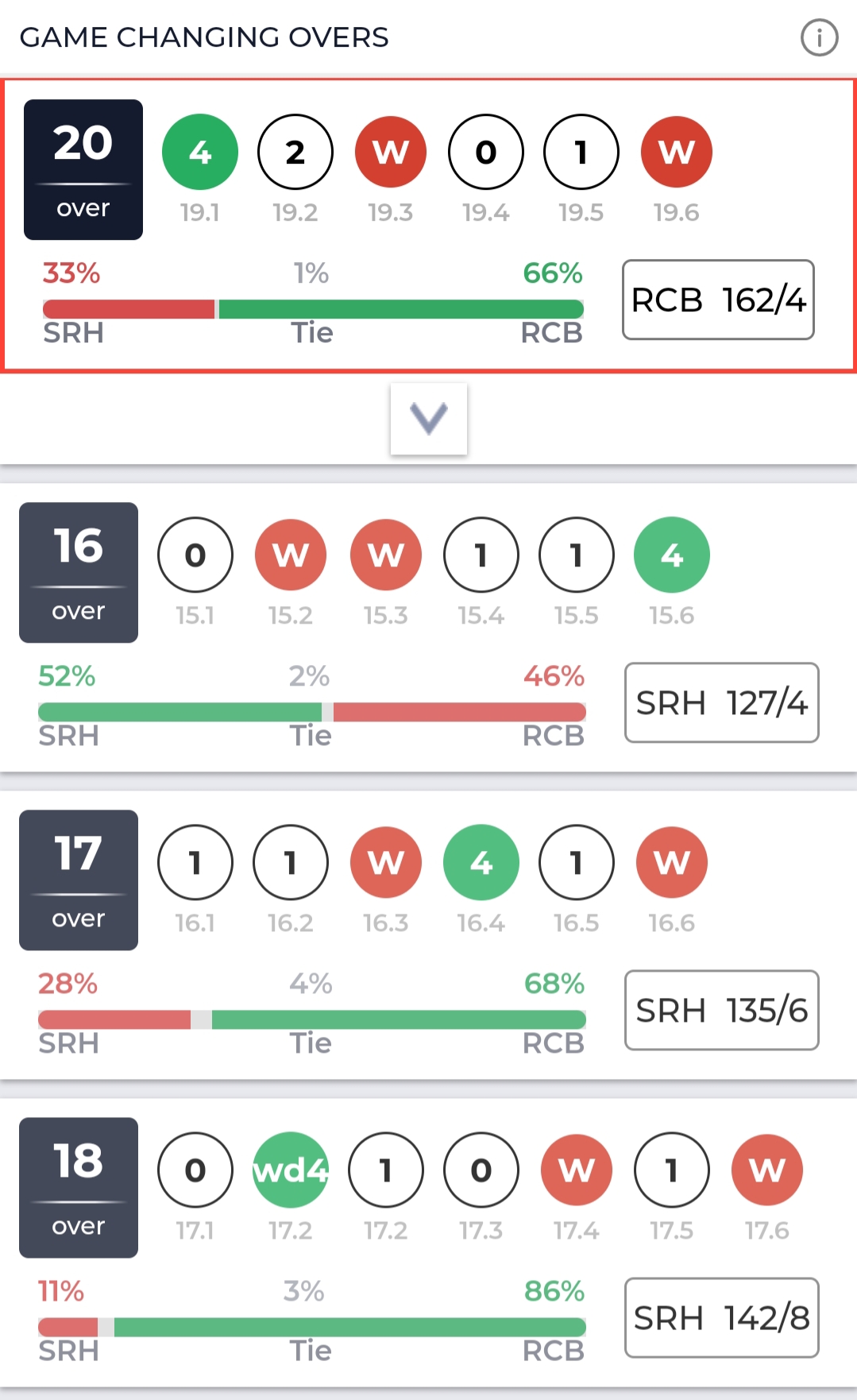 While Dube’s performance is one to be remembered for, one thing to note for RCB was that the situations happened in such a way that Dube’s bowling match-up happened against batsmen short of confidence, as Bairstow was at the other end.

Dube did well to bowl his off-cutters craftily against SRH, but against a stronger opposition, Dube could be cannon fodder at the death. If RCB can find a way to get a fit Morris in their line up, they probably could use Dube in the middle-overs to not let the momentum slip away.

Will RCB be keen to use Dube for their Death Bowling? Will we see the craftier side of a under-rated cricketer come to the fore?

RCB’s Death bowling arsenal seems to now be Chahal, Saini, Steyn and Dube. When a Chris Morris walks in, he should own the death bowling, since very few bowlers have the kind of death bowling stats like him in the last 3 years of the IPL

Since 2017, among those bowlers who have bowled 25 or more overs in the 16-20 over phase, only Jasprit Bumrah and Siddharth Kaul concede lesser runs per over than Chris Morris’s 8.5 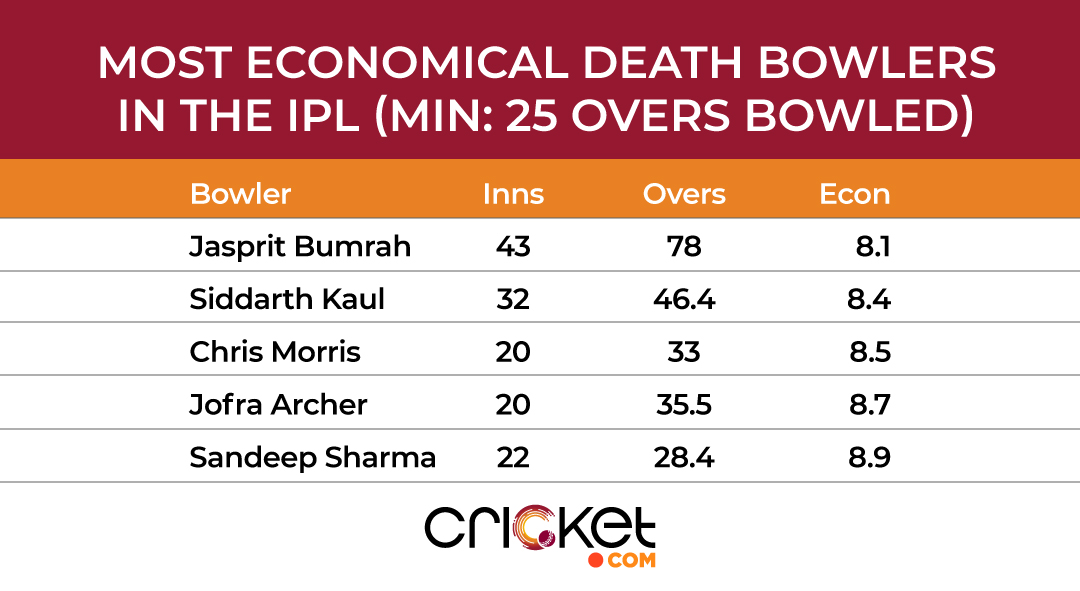 F) Where do the teams stand after this win? 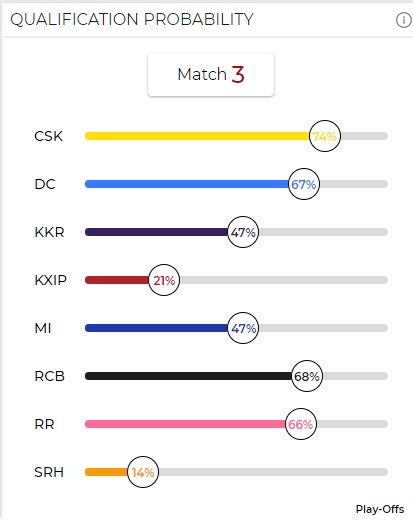 The Final-4 Predictor graph still swings towards our initial 4 predictions of MI, CSK, RCB and DC, though MI is yet to get points on the table. Maybe that would change in the game against KKR. You can follow that game’s win predictions and commentary here.

G) What did Criclytics get right yesterday?

Yuzvendra Chahal, Mayank Agarwal and Sam Curran are leading the charts. You can follow the changing MVP scales here.