Rohit, Bumrah choke New Zealand once again in the series 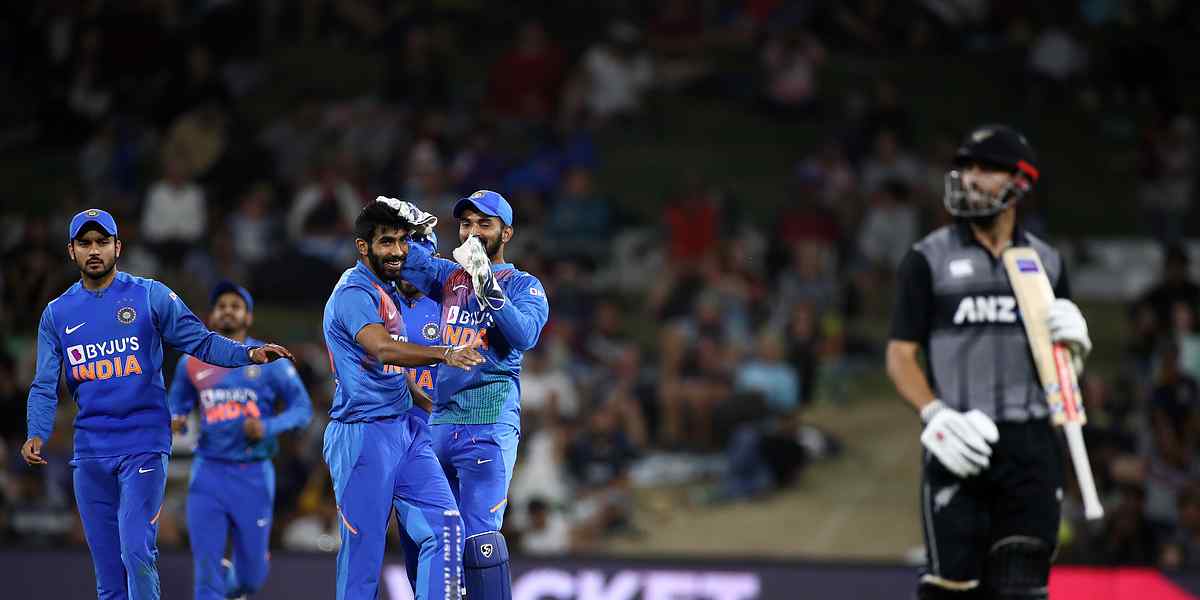 Rohit, Bumrah choke New Zealand once again in the series

44 balls, 40 runs, five wickets - This is New Zealand’s slump in numbers post Tim Seifert’s dismissal. On a pitch where starting the innings for a new batsman was difficult, New Zealand chocked again, for the third consecutive time in the series, after an astonishing 99-run partnership between Seifert and Ross Taylor to receive a thumping 5-0 defeat from the India.

To their credit, the Kiwis began their pursuit of 164 in a disastrous fashion, losing their openers in the first three overs followed by Tom Bruce’s departure in an awful run-out, but roared back into the game off the back of Taylor and Seifert. Targeting the inexperienced Indian bowlers, the duo made sure they send at least one delivery across the fence whenever the ball was in hands of Shardul Takur or Navdeep Saini, but played Yuzvendra Chahal cautiously. Later, they went berserk against Shivam Dube amassing 34 runs of his first and consequently, his only over of the game blasting him for four sixes and two fours.

Surely not today, is what the Kiwi fans would have been thinking when the required run-rate was down to 6.6 runs per over post the calamitous over from Dube. Seifert deposited the ball into the stands once again in the next over from Chahal further establishing the belief in New Zealand camp.

India’s innings was pretty much similar, minus the disastrous start and a devastating end. KL Rahul and Rohit Sharma stitched together a masterful partnership of 88 runs off 60 deliveries after Sanju Samson’s early departure. Their stand had its ups and downs. The first introduction of spin - Ish Sodhi and Mitchell Santner - from either ends threatened to strangle them for runs conceding only 16 runs off the three overs post the field restrictions.

Rohit, who was batting cautiously until then with a strike-rate of 108, took the onus to put the pressure back on the spinners by smashing both the spinners for a six each in the next couple of overs.

Once KL Rahul was dismissed for 45, India struggled for runs again managing only 16 off the next three overs. Shreyas Iyer struggled throughout a laborious knock of unbeaten 33 from 31 balls but the mastery of Rohit, who surpassed Virat Kohli’s feat of most 50-plus scores in T20I cricket, kept India in hunt for a formidable total.

When he went off the field in the 17th over owing to discomfort in his calf, India could accumulate only 25 runs from the remaining overs, largely due to Manish Pandey’s cameo of 11 runs from four balls.

The key for India was the presence of Rohit Sharma, one of the modern day batsmen against the white-ball at present, for the most part of the innings. The stand-in captain took the shouldered the responsibility in the absence of Virat Kohli to see the team through for as long as his calf muscles allowed him to.

The key for India with the ball was Jasprit Bumrah, probably the best white-ball bowler going round in world cricket at the moment.

When Saini broke the Taylor-Seifert stand, the stand-in skipper for the stand-in skipper, KL Rahul did not think twice before handing the ball to his best bowler. Bumrah responded with a wicket, going through Daryl Mitchell’s defence with an inch perfect yorker.

In a game which witnessed momentum-killing phases multiple times, Bumrah’s over - three runs and a wicket - led to the ultimate meltdown for the Kiwis. The required run-rate kept creeping up, reaching 10.3 at the end of the of the 17th over from 6.7 at Seifert’s dismissal and 7.5 at Mitchell’s departure.

Taylor, having scored a fifty in his 100th T20I, ran out of partners. Having struck all his boundaries on the on-side, he was drawn wide outside the off stump on the first ball of the 18th over by Saini in search of a desperate boundary. An outside edge to Rahul was the final nail in the coffin as New Zealand botched up another run chase.

Sodhi tried his best with the bat. With 21 required off the final over, he struck Thakur for a couple of sixes off the first four balls, keeping the Kiwis in the game. But nine runs off two deliveries is a job meant for a batsman, all of whom were back in hut after another average show with the bat.

Bumrah, who had finished with the astonishing figures of three for 12 took the man-of-the-match award while KL Rahul, having added another feather to his cap by captaining the side in the second half of the game, was named the man-of-the-series for his 224 runs with the bat along with his contributions behind the wicket.

India arrived in New Zealand with only three victories to their name against the Blackcaps but are now levelled in the head-to-head competition with eight victories for each side. New Zealand, having succumbed to their eighth successive defeat in international cricket, have a lot to ponder about, especially in the way they play their T20 cricket.