A case against opting to bowl first 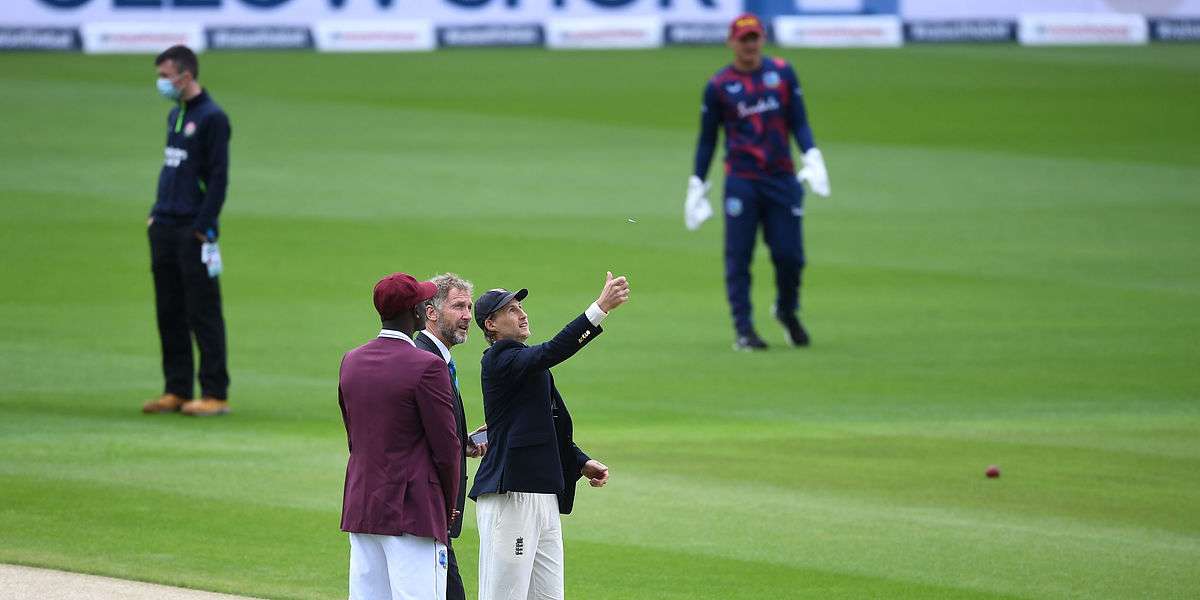 A case against opting to bowl first

The overhead conditions lure the captains into bowling first in England. But, is that a wise call?

Being one of the most successful captains of all-time, we expect Ricky Ponting to not have many regrets. But, if probed, he might wish to revisit the decision at toss at Edgbaston in 2005. On the morning of the second Ashes Test, Glenn McGrath injured his ankle by stepping on a stray cricket ball. That did not alter Ponting’s decision to bowl first. However, it did change Australia’s fortune in the series.

In the ongoing Wisden Trophy, it was Jason Holder’s turn to make an error of judgement. After a successful first Test, Holder decided to replicate the same framework for the second one.

In the first Test, Ben Stokes took a bold call of batting first on the day marred with rain. England survived only 67.3 overs and folded for 204. They batted better in the second innings to set a target of 200 for the West Indies. The result went in favour of the visitors but the journey was not smooth. They were three down for 27. If not for three missed chances of Jermaine Blackwood, the result could have been different. All in all, England competed even after a sub-par first innings total.

In the second Test, Holder opted to field first. The factors affecting his decision were the overhead conditions and the result of the first Test. But, when they had a spinner on in the 14th over of the innings, it was evident that the decision was more on excitement than on merit.

What made matters worse was an erratic first spell from the West Indies pacers. Shannon Gabriel looked stiff and Alzarri Joseph had to leave the field on the second day. England fielded an entirely different pace attack for the second Test. While the West Indies did not have such luxury given the inexperience in the squad. If Holder had opted to bat first, they might have been better off with an extra day of rest given a quick turnaround between the Tests.

In Tests in England since 2000, teams have opted to bowl first on 52 occasions in 141 Tests. Only 19 times have they emerged victorious in such a scenario. In these wins, the average score in the first innings is 190. The average score in the second innings has been 447. This implies that whenever a team that opted to bowl first and won the Test, they dismissed the opposition under 200. In reply, they scored around 450 themselves in their first innings.

Since 2010, the situation for teams opting to bowl first in England is worse. They have won only six out of 27 such instances in 71 Tests. The average score at which they restricted the opposition in the first innings in these Tests is even lesser: 160. 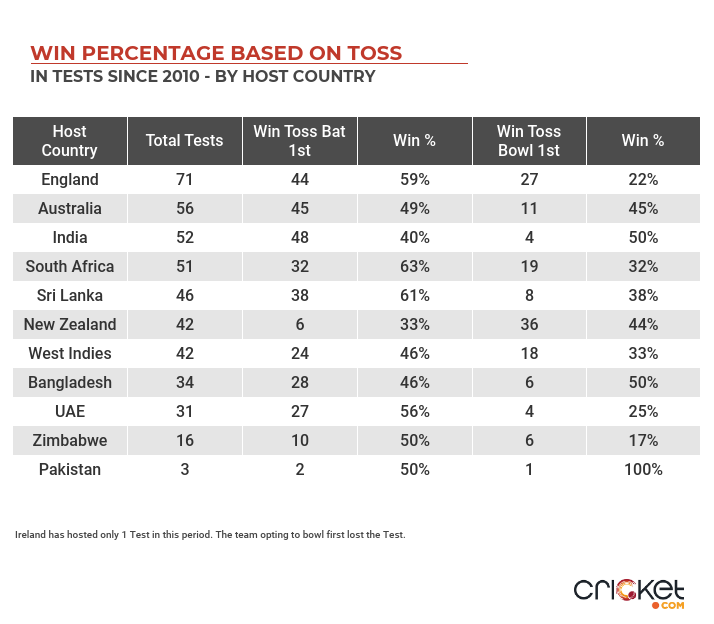 New Zealand is the only country where teams prefer to bowl first. It is also the only country where teams have a better record while doing so. We cannot draw the same conclusion for matches in the subcontinent countries because of a very few instances of teams opting to bowl first. In England, the win percentage of teams bowling first since 2010 is 22%, only better than Zimbabwe’s 17%.

THE ILLUSION OF BRITISH SUMMER

There is a reason why captains get tempted to bowl first in England. It is the only cricket nation where a summer involves wearing pull-overs and using hand warmers. It is possible in an English summer that the density of the clouds overhead vary distinctly on two consecutive days. This uncertainty makes the captain to take a decision based on the conditions at the time of the toss. Luring them into living in the present and do not worry about the immediate future.

Captains factor in the overhead conditions too much and fail to weigh-in the general behaviour of the pitch. Like in all other nations, the pitches in England start deteriorating from the first day. The lateral movement for the pacers does not alter much throughout the course of the Test. However, the uneven behaviour of the surface becomes an additional factor on days four and five. This provides an extra weapon for pacers and allows the spinners to have a say as well.

As a result, scoring 200 in the first innings is easier than doing so in the last innings. The average score chased in the last innings in all Tests in England since 2000 is 150. Since 2010, it has improved only to a 158. Hence, unless it is a green top and dull overhead conditions that warrant enough help for the seamers to dismiss the opposition under 200 on the first day, it is fruitless to bowl first.

West Indies committed that error in the second Test. The England batsmen were able to grind their bowling attack to dirt. In return, the West Indies batsmen could survive only 70.1 overs on the last day. England competed in the first Test, West Indies were absent in the second one.

Like in politics, it is unusual in cricket for captains to accept the error of judgement. Of course, there is brainstorming behind every decision and no team takes a decision in the spur of a moment. That is what makes such naivety difficult to comprehend.

This is not the first time a captain has made this error in England, nor will it be the last. Ponting's decision to field first ensured England’s historic comeback in the series. It initiated a series of empty-handed tour to England for his country. Fourteen years later, Tim Paine threw away a chance to change their fortune by opting to bowl first at the Oval in the fifth Ashes Test in 2019.

Virat Kohli lost all the five tosses when India toured England in 2018. They lost the series 4-1. The sole victory was in the third Test at Trent Bridge when Joe Root opted to bowl first. After losing the toss in the fourth Test, Kohli could only manage a laugh as he said, “I was hoping Joe opts for the four-letter word starting with B”.