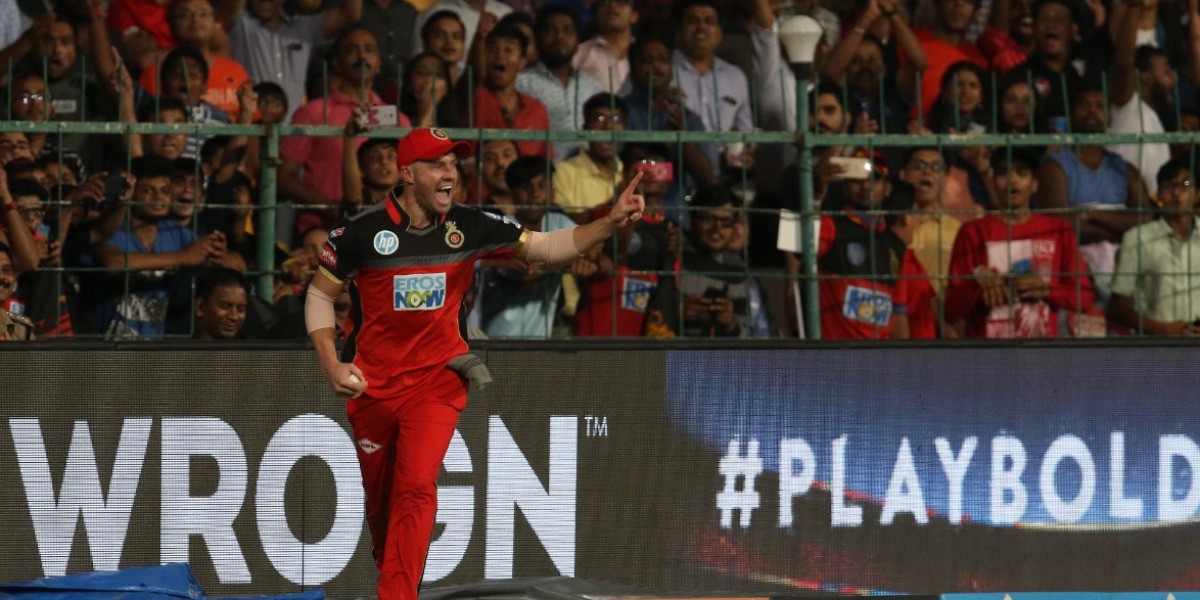 ABD is a freak, a run-machine, a gun batter and an absolute legend of the game but don’t we all know that?

Watching de Villiers close from the stands is perhaps on par as marvelling Mona Lisa in Louvre, after endless hours of wait. You get through the gate after spending a great amount of time scathing through Bangalore’s horrible traffic and watching the South African in flesh feels like nirvana.

That was my introduction to the legend, AB de Villiers, the man as well as the myth. The year was 2010, it was a day/night game between Royal Challengers Bangalore and Delhi Daredevils. Heading to the venue, there was a buzz around the stadium with the fans painting themselves red and black. RCB even won the toss but evidently, there was only one winner that night: AB de Villiers.

It was possibly his introduction to Chinnaswamy Stadium, it was possibly the first time that the vociferous crowd at the venue went numb and stood in awe of a player from the opposition. It was perhaps the first time; I had realised that the fielder at the long-off boundary wasn’t just another ordinary player.

First impressions are always the best but this first impression for me was a long-lasting one and that night was etched in my memory: forever. The first half of that clash was a rather uncharacteristic day for de Villiers, he found timing tough, scored only 45 off 35 balls, with three boundaries and was eventually run out.

Now reading this in 2021, it might all be surprising: the fact that de Villiers scored just 45, managed to only score three fours and was run out. But the second half arguably made me realise that he isn’t any ordinary cricketer. First, the run-out, to catch Eoin Morgan short of his crease and later that catch. It was the 18th over of the innings, the game was done and dusted, it was a mere formality.

Fans at the venue were already on their feet, not to appreciate Delhi but in anger, after looking at their side’s tumble. Praveen Kumar swung his bat and it looked like it was heading towards the boundary but then what transpired in the next few seconds defined de Villiers the best. He wasn’t de Villiers anymore, he was de Villiest.

Standing a few meters in, there was not a percent chance that the South African could have got to the ball, but he didn’t just get to the ball, he flung himself like a Superman and plucked the catch, literally out of the thin air. Everyone who were on their way back to catching buses home stood in shock, some even stunned and the others: bamboozled.

The entirety of Chinnaswamy Stadium went numb, not a person could believe what had happened, a few even cussed the fielder for that take. But that was the night when de Villiers introduced himself to the Chinnaswamy faithful while still donning the Delhi jersey.

AB de Villiest aka the Superman or perhaps even, the Chinnaswamy Cheetah.

In an era where every piece of IPL action is on YouTube, it took me forever to only not find that catch from Superman. Maybe too much for even YouTube, eh?

People absolutely adore Bangalore’s weather. Some even want to store it in a container and absorb the atmosphere from time to time. And six years ago, here in Bangalore, AB was set to play his 100th Test match. 100th Test match, let that settle in, the venue was his second home away from home. The only thing that looked to stop him: rain.

Tickets were available in plenty, not because it wasn’t a worthy fixture but because people knew what to expect of the city’s monsoon. Still studying my UG, I knew that I couldn’t waste a long time in finding tickets for this fixture. Perhaps, it was a fixture that I was desperate to watch. The fact that there was Virat Kohli, at his peak going against de Villiers, whose peak never bowed down was enough enticement for me. 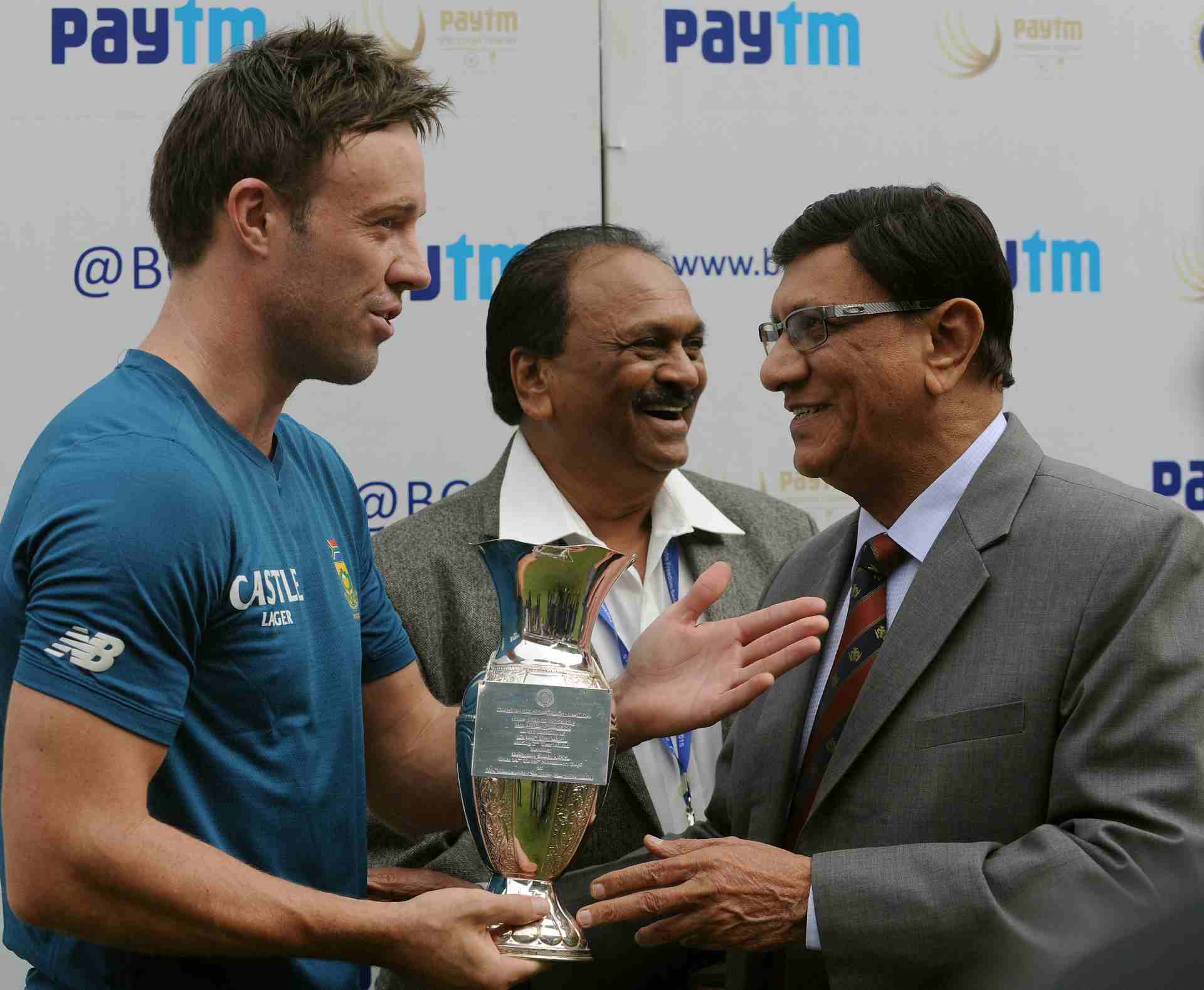 And then I had to drag my friend, braving the weather and traffic only to watch de Villiers slowly yet steadily steadying the ship for his country. It instantly reminded me of his knock in Adelaide but there was Faf still at the crease in that Test. Here, he had to stitch a partnership with the lower-order batters, brave the monsoon and yet somehow had to find a way to tackle Ravichandran Ashwin and Jadeja.

That he did, in fact, he was more than brave, he kept coming at the Indian bowlers. It was tough to gauge which side was on top of the other, with the way de Villiers was knocking the ball. He found boundaries with ease, even knocked one to the crowd and kept the music going. And when he was dismissed, thanks to a flash of brilliance from Saha, the crowd was on their feet, in unison and appreciation.

He went on to play only 14 more Tests but this moment, for me, would always be a watershed moment. His 100th Test, at his second home in Bangalore, lasted one day and a session before rain played the ultimate spoilsport. With the rain pouring down, it was definitely looking like curtains but that didn’t prevent me or my friend from waiting patiently for South Africa’s bus, to witness de Villiers.

Some people are fortunate, some people lucky and then there was me, fortunate and lucky to witness de Villiers three times in the same era. It almost felt like I was growing up watching him become this T20 monster. It was this mouth-watering clash between RCB and SRH, at the Chinnaswamy.

And like his career had progressed, my seating at the venue too was upgrading steadily, this time from one of the pavilion stands. It was yet another night fixture, against an in-form team led by Kane Williamson. Chinnaswamy Stadium has this reverbing phenomenon associated with it but on that night, it was deafening.

6/1, RCB were in trouble but somehow, if you were in the stadium on that night, it was like there was this celebration around. That was how AB de Villiers was welcomed to the crease. There wasn’t one minute, when the crowd didn’t chant ‘ABD’ ‘ABD’, it was almost like they were chanting his name for good luck.

Alongside Moeen Ali, the duo showed impressive skills and incredible composure against one of the best bowling units, in Sunrisers. There was Rashid, Sandeep Sharma and Shakib Al Hasan. But the two showed that even the best of bowling units could travel across to MG Road and beyond. Some even say that the ball is still travelling. Every run was cheered, it almost felt like it was AB’s home. 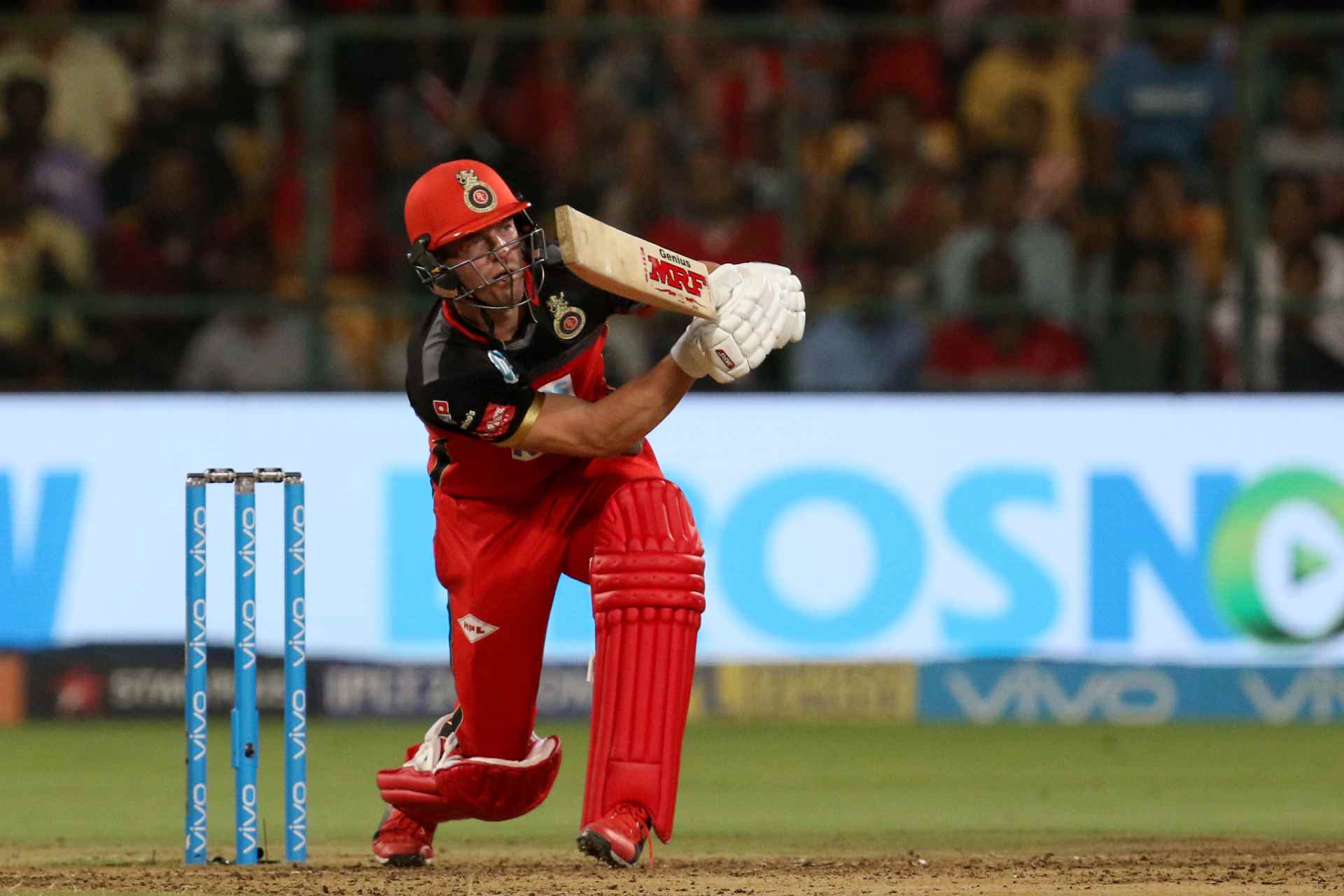 Every time he moved or shuffled; the result was obvious: it sailed at a racing pace to the boundary. The ropes were shivering, it was almost like they were taking a beating every time de Villiers’ bat saw the middle. And when he walked off, the crowd was on their feet, he scored 69 on that night, it wasn’t a 100 or it wasn’t a match-winning innings, at least yet but the respect was unparalleled.

Even the people who didn’t really understand the game of cricket realised that de Villiers was special. The aura around the man was mystical, the man was more than folklore. He was a legend, in the making, home and away from home. He wasn’t done yet, on that night. When he walked out to the field, you could sense it in his athleticism, he wanted that win.

In the 8th over of the innings, Moeen Ali is the happy bowler. Alex Hales was tonking the ball, the crowd went almost silent watching the Englishman smack the ball all over the park. There was a genuine fear, knowing what Sunrisers were capable of. Kohli had brought on the English all-rounder to round up his countryman. Now hang on, if you look at the scoreboard, it will almost look like it was Moeen’s wicket all along.

But you are wrong. It wasn’t and shouldn’t be Moeen’s wicket, cricket is cruel. It should and would always be the South African’s wicket. He jumped, well let’s say leapt, like a Superman, plucked the ball out of the thin air and then kicked the ball like it was rugby. Kohli is always animated, no doubt about that but on 17 May 2018, he was more than animated.

Kohli ran all the way towards de Villiers, sprinted almost like he was Usain Bolt to congratulate his brotherman. His team ensured that every bit of the last hair on his head was disrupted. The crowd never stopped chanting ‘AB, AB’ on that night and that’s how much the South African is respected in Bangalore. 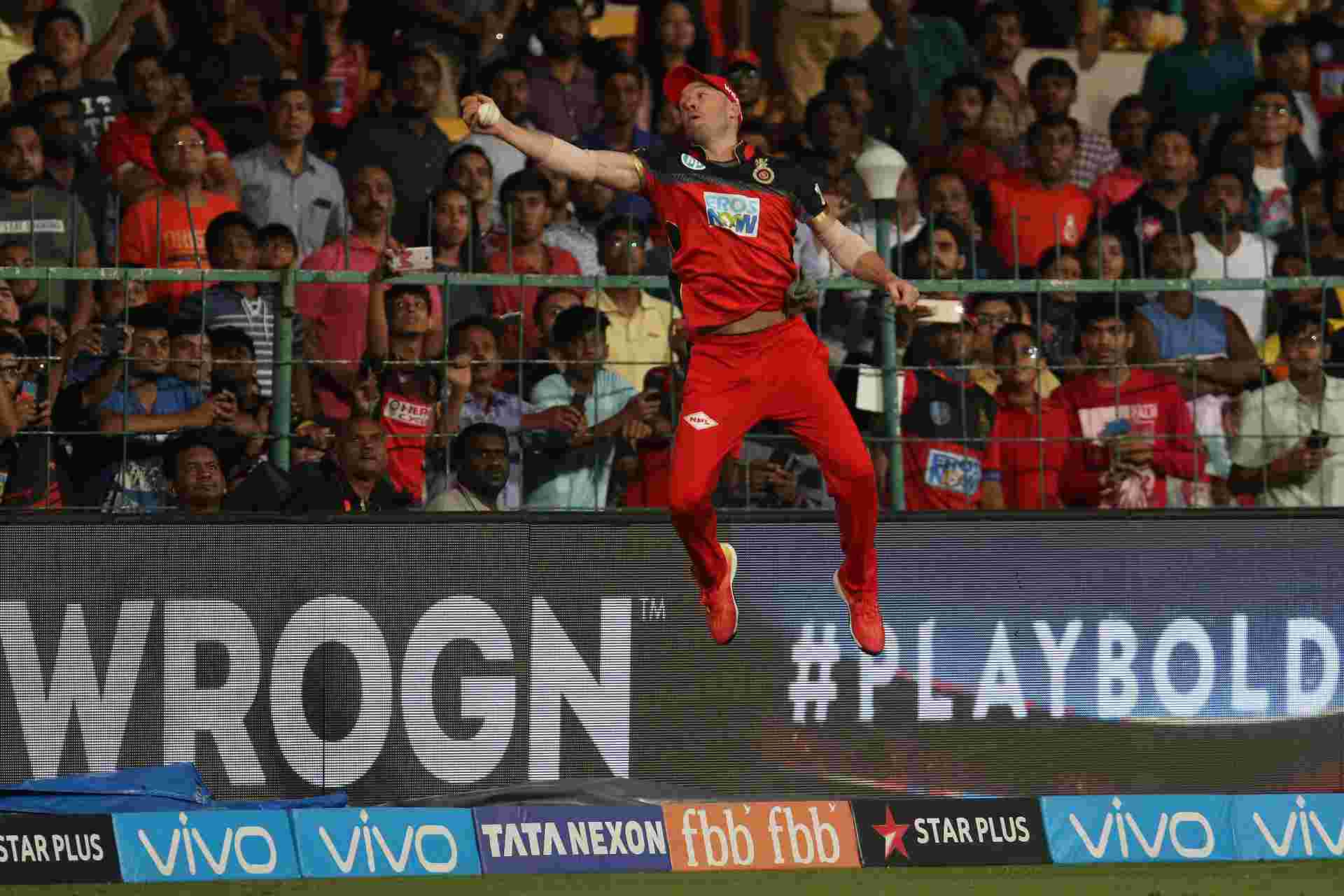 AB was not just a player, he was a legend, he was one of their own, he was folklore that a generation was blessed to witness. And, just like the several thousand on that night, I was too on my feet, marvelling the 34-year-old’s aura ringing around at the Chinnaswamy Stadium. Eight years apart, my journey of watching de Villiers grow as a cricketer came to a close.