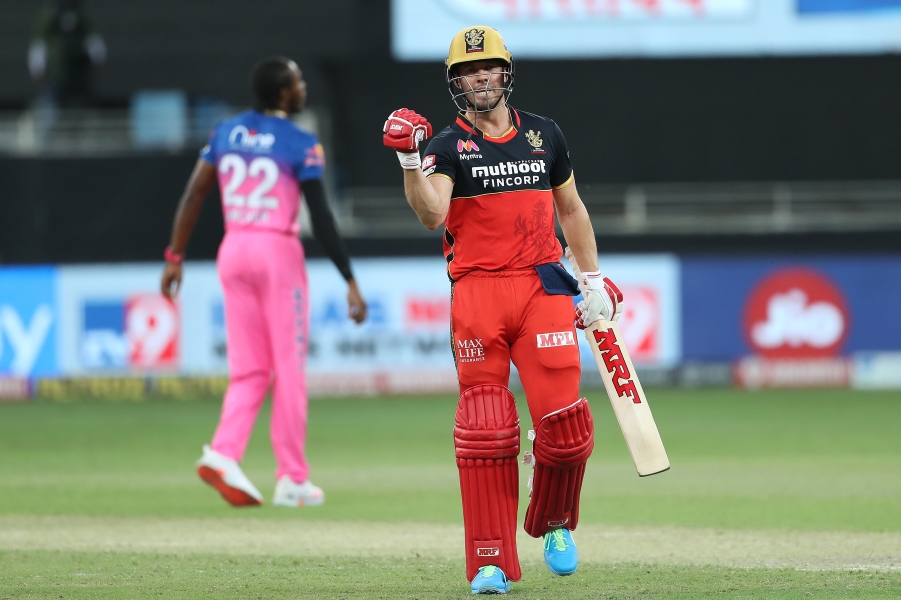 Chasing 178, De Villiers smashed six sixes to help RCB win the game after all seemed lost for them following the dismissal of Kohli (43) in the 14th over

Royal Challengers Bangalore skipper Virat Kohli on Saturday (17th October) called AB de Villiers the "most impactful player in IPL" after the South African blasted a 22-ball 55 to set up an incredible win against Rajasthan Royals.

Chasing 178, De Villiers smashed six sixes to help RCB win the game after all seemed lost for them following the dismissal of Kohli (43) in the 14th over.

"AB is always been someone who's been ready to look at the situation and adapt his game accordingly. In my eyes he's the most impactful player in the IPL," Kohli said during the post-match presentation ceremony.

"If he goes, the opposition know they have a slim chance and there's a good reason for that. It's purely because of the presence of someone like him that teams feel we are never out of the game."

"To be honest, you're always tense in chase because you're not sure how many balls AB is going to get. Credit to Gurkeerat as well, he stuck with AB, got that important boundary. It doesn't matter who the bowler is, he does what he does."

"The individuals are stepping up and we've been done that all through the tournament, which is why we have 12 points. Very happy right now because after this we get three days off," Kohli said.

Talking about his team, the Indian skipper said: "Our game pattern is very clear. Young Dev (Devdutt Padikkal) has batted beautifully, Finchy (Aaron Finch) has played some impact innings. We understand the dynamics and we're sticking to our plans. The bowling has really stepped up this season.

"(Chris) Morris has been brilliant, just that energy he brings. (Navdeep) Saini, Washy (Washington Sundar) and Isuru (Udana) as well, the bowling has come together well."

De Villiers, who was adjudged the Man of the Match for his blistering knock, said he was nervous in the 19th over as he had to hit those big sixes to get his team home.

"I didn't hit even one of them (sixes) off the middle. When Unadkat was bowling, I was looking leg side but to be honest I was nervous because I knew I had to hit it well. Luckily I got a few away," he said.

With four fifties, including a 33-ball 73 against Kolkata Knight Riders, the former South African skipper has been in rampaging form this IPL.

"I'm very very nervous and erratic (in chase) and I get very stressed like any player. I want to perform for the team and show the owners I'm here for a good reason. And family, fans, and also for myself.

"Last game I didn't perform my role as well as I should have, but this time I did. It's a cat and mouse game, I always respect the bowlers. If they bowl well to me, they'll have the upper hand."

RR captain Steve Smith was crestfallen after yet another defeat, their sixth in nine games.

"Sure it is a hard pill to swallow. Just got AB'd there. That's two in a row we were in the box seat to win but didn't. Disappointing," he said.

"I think it was a good score on a slow wicket. I thought we built the pressure pretty well and it took a pretty special innings to take RCB home."

Smith's decision to bowl Jaydev Unadkat in the penultimate over backfired as he was taken to the task by de Villiers, who smashed three successive sixes to swing the match in his team's favour.

"We wanted to use Jaydev to the bigger boundary, he bowls a lot of slower stuff into the wicket. Obviously boundary not big enough for AB."

Smith said it was just "serious batting" by de Villiers, who made the penultimate over look so "awful".

"In hindsight and now in the result, yeah absolutely," Smith said when asked if he should have bowled Jofra Archer in the 19th over.

"There are not too many guys who can hit the ball the way AB did, under pressure, to a big side and clear the fence very easily... But hindsights are a wonderful thing, isn't it?

"We need to win our last five games to have a chance to make the play-offs," he said.

On a personal note, Smith was back among the runs, scoring a 36-ball 57.

"It was nice to spend sometime in the middle, having not done much of it in 5 or 6 games."

Royals lost two wickets and could score only four runs in the final over bowled by Chris Morris and Smith said "the last over was a bit disappointing."

"I think we got just 3 or 4. But I thought the score we got was just about par and we thought if we bowled and fielded well, it will be hard to chase down on a pretty slow wicket," he said.

On Robin Uthappa opening the innings, Smith said: "We wanted a bit of experience in middle. Jos is an amazing opener but he is also one of the best at the back end. He gives us a bit of that balance in the side.

"Obviously Robin has done a lot of opening and I think he has played well today."

Morris, who was the pick of the RCB bowlers with four for 26, said watching de Villiers "still blows my mind how AB is so calm and hits it so far."

"... I said to a few of the Rajasthan boys, I know you lost but sometimes it doesn't matter which side you're on, you can only go wow."

"He is a freak, isn't he? That's why he is the greatest of all time. What we saw was another masterclass, we have seen a number of them already in this tournament.

"He had one here against Mumbai, and obviously the other day he got 73 off 33," Katich said during the press conference.

The coach also said that they learned from their mistake in the last game and ensured that de Villiers batted at his usual number four spot. The South African star had come in at number six against KXIP on Thursday.

"We certainly made sure that he bats in his right position today. We certainly learnt from our mistake and he was wonderful.

"The reason we won was I think he was magnificent, Chris Morris was brilliant, (Yuzvendra Chahal) got us back in the game with his two wickets, we had a number of crucial performances but AB basically won us the game single-handedly.

"Looked like Rajasthan deserved to win and we got out of jail really."

NEWS
Decision to push AB down the order didn't work: Kohli
Washington Sundar was sent ahead of the South African at number four