An embellished career with ups and downs 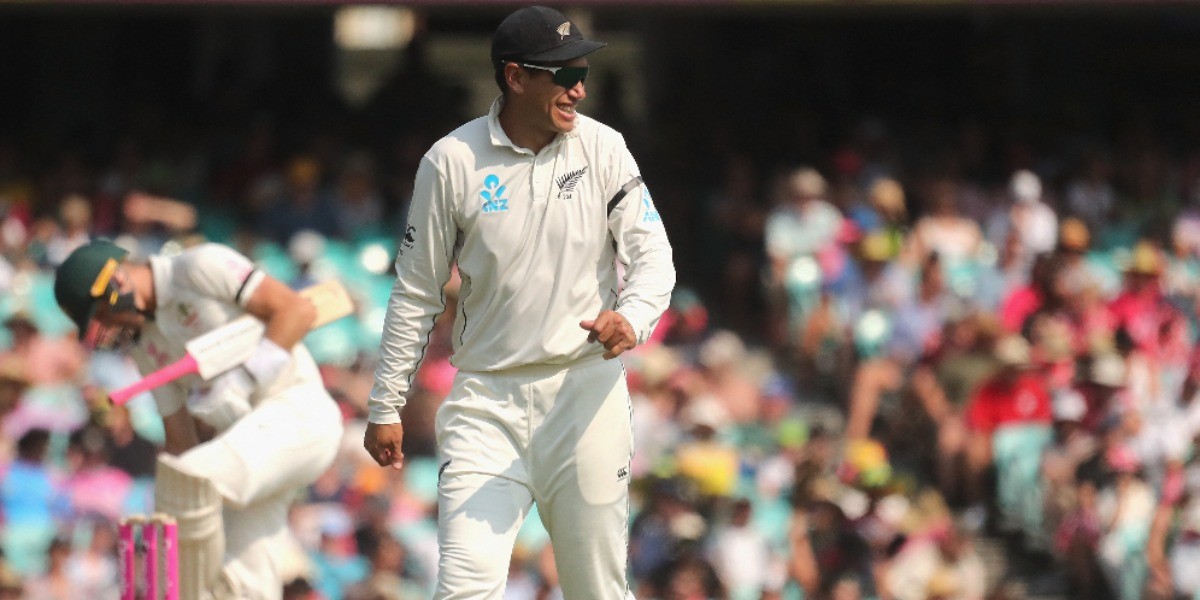 An embellished career with ups and downs

Ross Taylor and Kane Williamson have added 3875 Test runs while batting together. Not surprisingly, the most by any Kiwi pair in their history. In the final hours of the World Test Championship Final, the dup were together when Taylor powered his signature flick to help their team cross the line and finally get their hands on an ICC Trophy.

Williamson and Taylor are at a somewhat opposite ends of their career. Williamson is 30, leading the side towards greatness and with a lot to achieve at an individual level as well. Taylor is 37 with his best years probably behind him. Although he recently squashed retirement rumors, but an average of under 40 in the last two years and an up and coming talent in Will Young seemingly ready to fill the slot has not allowed him to brush this question aside. But for Taylor, the highs and lows in a career has nothing to do with age. This is a trend from when he first started playing for the Blackcaps.

Taylor made his debut against South Africa in Johannesburg in 2007. Predominantly a leg-side player, Taylor took limelight very early in his career. He scored over 800 runs in 2008, the year after his debut. After 12 years in a New Zealand shirt, Taylor was in the history books of New Zealand as their highest run scorer.

Taylor’s career has had its share ups and downs. He played only two matches in his debut year. But, for the following two years he scored around 1500 runs at an average of around 50. Then came a slip in the two years that followed. However, he kept that behind and smashed 800 runs for consecutive years (2012 & 2013) and at a good average. Once again, the following two years, Taylor wasn’t at his best. His journey has followed a pattern when for couple of years he has struggled and then he has revived himself like a phoenix. 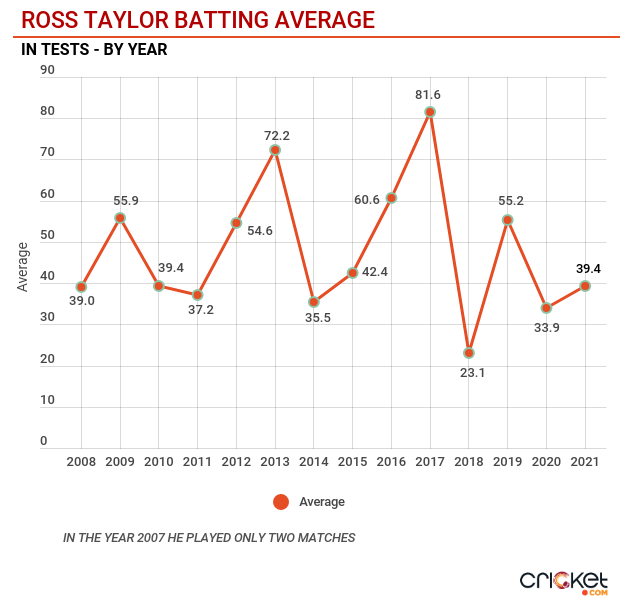 It’s the performance in away game that often decides a player’s greatness. Similar to his overall career, there has been times when he has been exceptional like 2016 where he averaged 60.3 in 10 away innings. This is the third-best for a Kiwis who has batted 10+ innings in away conditions in a calendar year.  But also, there have been years like 2010 where he has averaged less than 30.

For every batsman that has gone on to become a legend, there is always a batting position that he likes to own. 88% of Sachin Tendulkar’s runs came while batting at number four, Rahul Dravid scored 79% of his Test runs at number three. Similarly, Taylor has owned the number four spot. 92% of his runs have come when he has batted at that spot. The 92% of runs is the second most for a non-opener who has scored minimum of 5000 runs in Tests. In the all-time number four list, Taylor is at the fifth spot with 6970 runs. 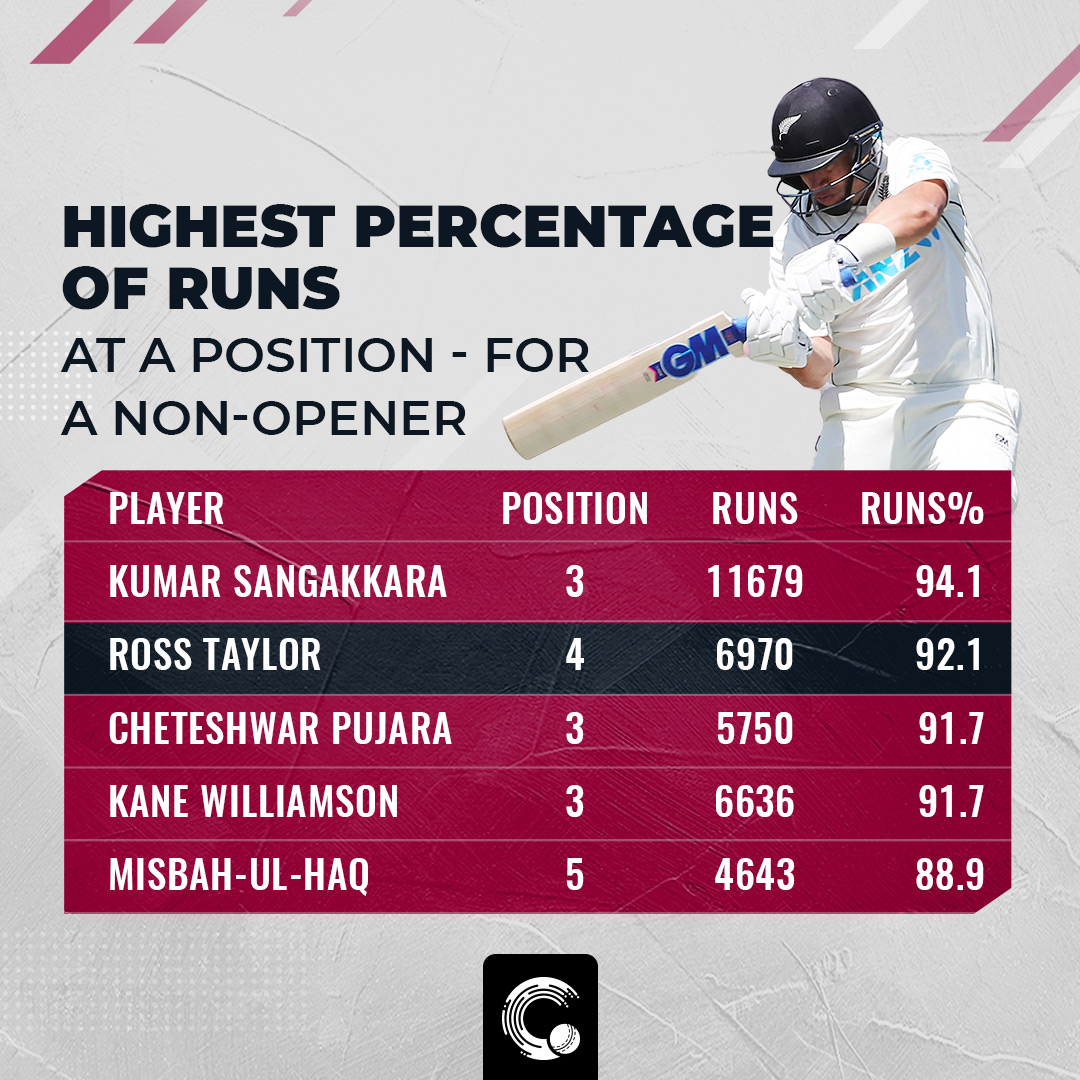 His highest Test score of 290 against Australia in Perth is the fifth-highest score for a number four batsman. Also, this is the second-highest for a batsman batting at number four or lower in an away innings.

A PIONEER IN WINS

“I still want to learn and still get better. But, yeah, at this stage I just want to keep playing cricket. New Zealanders for whatever reason retire at 34 or 35, and once I got to 37 I can understand why they do - you get asked the question a lot, your age comes into question a lot more when you do things exactly the same as what you were doing two years ago, but you're doing them wrong because of your age which is sometimes a bit hard to swallow” In his interview with ICC after winning the WTC.

It certainly has been a decorated career for Taylor, let be in Test or ODIs or T20Is. And now he is part of the side crowned as the Test Champions. Like every other cricketer who has crossed 35, the retirement questions start to arise after a few failures. But, Taylor is completely reluctant on retirement. Why shouldn’t he be, when James Anderson being a fast bowler is still playing at 39.