Angelo Mathews: A soldier who fought valiantly till the end 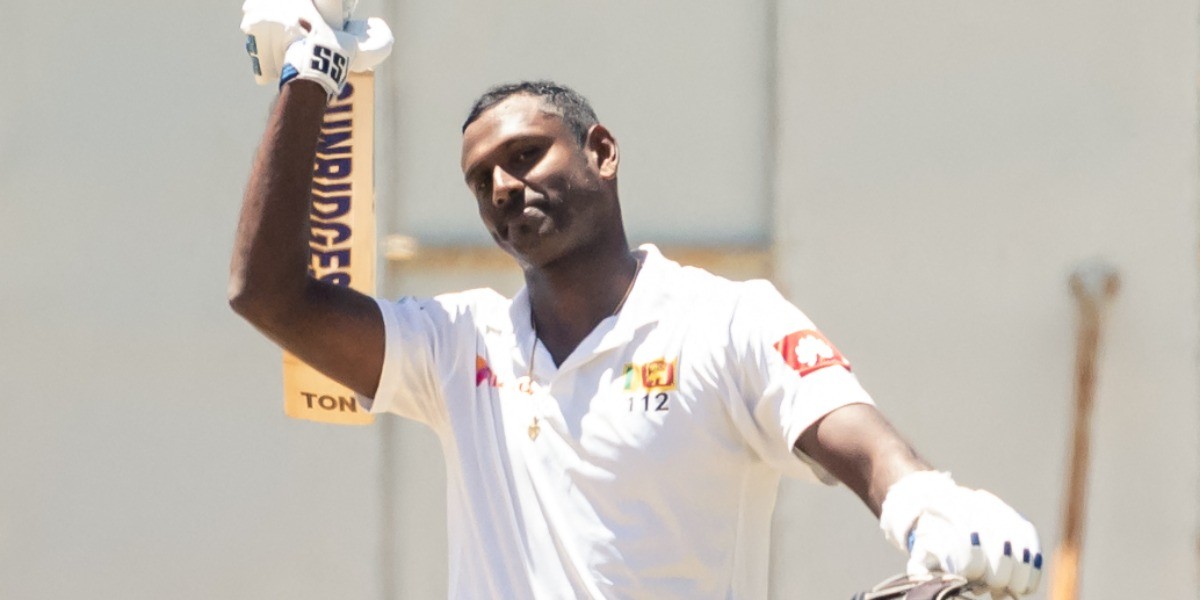 Angelo Mathews: A soldier who fought valiantly till the end

Have we seen the last of the former Sri Lanka captain already?

After Mahela Jayawardene and Kumar Sangakkara’s retirement, Angelo Mathews was seen as the torchbearer of Sri Lankan cricket. While Mathews lived up to expectations, a combination of injuries and lack of support from anyone else, saw not just the fall of Mathews, but also Sri Lankan cricket.

Mathews continued to make a case for himself with a few glimpses of his prowess with the bat but had to cut back on his bowling as he suffered hamstring injuries on a regular basis.

Former coach Chandika Hathurusingha was so frustrated with Mathews’ poor running between the wickets that he decided to drop the veteran all-rounder for the ODI series against England in 2018.

“Running between the wickets is a very big concern for us at the moment - for the whole team, not only for [Mathews]," Hathurusingha said in September 2018.

"We want him to get fitter. His average since 2017 is 59 - I know that. And he scored 97 runs against South Africa three matches ago. But there are certain concerns. If you look at his record, he has been involved in about 64 run-outs, and 49 times the opposite guy got run out. That's a world record. Those are the things that we've been looking at. But I want him back as fresh as possible, and clear as possible, to serve the Sri Lankan team," he added. 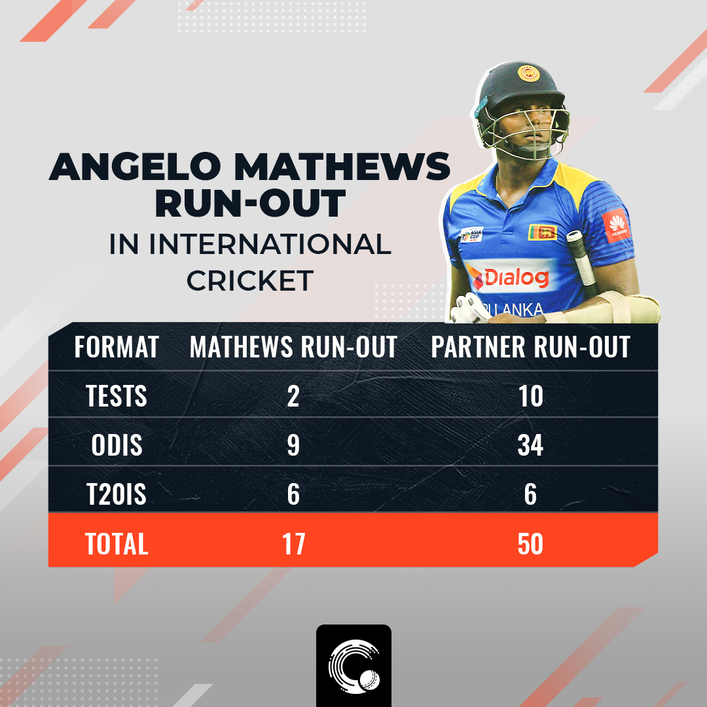 Despite his fitness issues, Mathews has been irreplaceable in the Sri Lankan line-up – be it as a batsman or as captain. The fact that a half-fit Mathews finds a place in the team and is more often than not handed the captaincy time and again despite quitting the role in 2017 shows the value he adds to the team. Initially starting out as an all-rounder, he could fit into any team in the world solely on the back of his batting prowess.

Sadly, he has often been let down. The likes of Dinesh Chandimal, Kusal Mendis, who could have taken up the mantle have largely been inconsistent, which has not helped take the pressure off of Mathews.

It’s safe to say Sri Lanka’s tour of England 2014 was one of Mathews’ highest points in international cricket. Both Tests went down to the wire, but Sri Lanka managed to clinch the second Test with just one ball to spare. Mathews scored a match-saving ton at Lord’s, but at Headingley, his 160 - perhaps his best innings till date – set the match up beautifully as the Lankans went on to create history. His 4 for 44 in that match still remains his best bowling figures in Tests.

Mathews had the luxury of batting at six as a genuine batting all-rounder across formats, given that the top-order included legends like Sangakkara and Jayawardene. Plus with Mathews and Chandimal in the side as well, Sri Lanka were a pretty formidable unit. But the real problems started once the two giants in Sri Lankan cricket retired.

Since their retirement, Mathews has played predominantly as a batsman, often batting in the top four or five. Due to his hamstring injuries, his bowling too went down drastically. Had Sri Lanka found someone else with a similar skill set, Mathews could have been sidelined. But other than Dasun Shanaka, who is a batting all-rounder like Mathews, nobody else has even come close.

Not to forget, no side has more losses than Sri Lanka at the international level since Sangakkara and Jayawardene’s retirement across formats, due to which Sri Lanka currently lie in the wrong side of the ICC rankings. So much so, that they are not placed high enough to get a direct entry into the 50-over or the T20 World Cups – two tournaments they have won previously. Clearly, a huge void has been left in the Sri Lanka team, which has not been filled over the years and as things stand, there seems to be no light at the end of the tunnel. 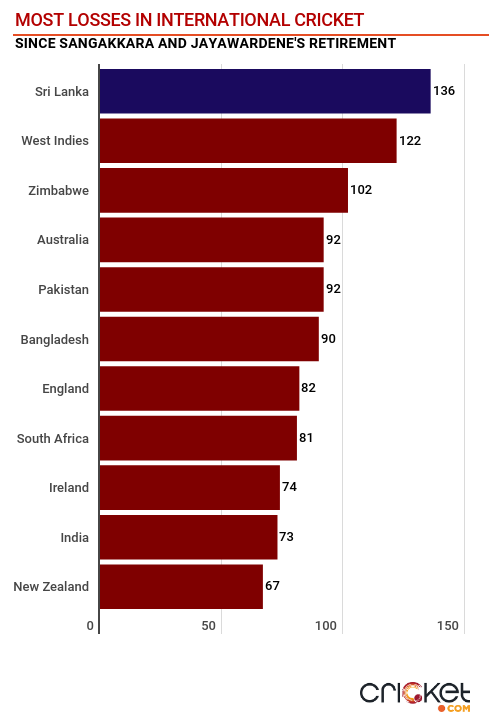 India were in a similar situation when all-rounder Kapil Dev bowed out of the game. India too took a long time to find a genuine fast bowling all-rounder like Kapil Dev. While none were of the stature of the World Cup-winning captain, a few like Stuart Binny, Hardik Pandya and Vijay Shankar were given a go. Hardik was earmarked as a long-term prospect, but then since he has not been able to bowl regularly over the last 2-3 years due to back injury, he has been out of the Test team and in limited-overs, he plays solely as a batsman.

Balance is something all the teams seek and if an all-rounder is unable to perform both roles it is time that the team looks for other options. For now, Sri Lanka have not groomed any like-for-like in Mathews’ place in all these years. But they may have to do that sooner rather than later, given that the former skipper is on the verge of retiring from the game after not signing a new contract.

Another crucial aspect that Sri Lanka has lacked is stability. Since Mathews quit as permanent captain after the ODI series defeat at the hands of Zimbabwe in 2017, the team has had as many as 12 captains (including Mathew) across formats.

The most recent causality being Kusal Perera, who was sacked after an unsuccessful series against Bangladesh and England. They have brought back Shanaka, who had led the team in three T20Is against Pakistan in 2019.

Also, with the entire contract dispute, it is utter chaos – all of which make for a complete disaster. There is no calm, but storm all the way!

However, in Mathews, Sri Lanka had a trustworthy lieutenant, who would don any cap with ease. They may not find someone like him for a long time. A huge blow, especially after the departure of Jayawardene and Sangakkara SIX years ago.