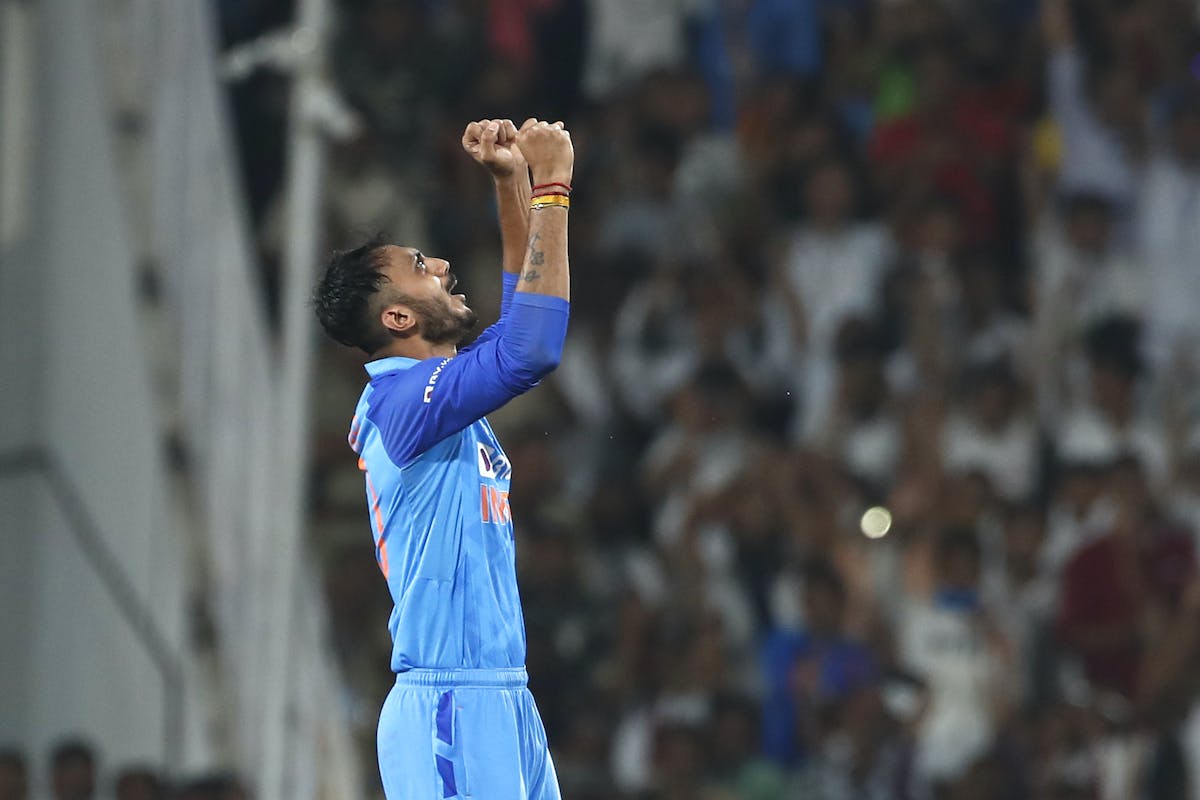 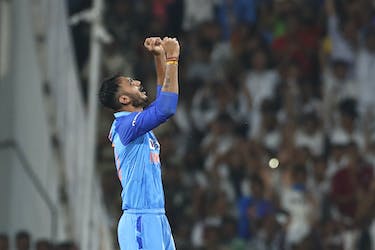 For the longest time, Axar Patel’s identity has been reduced to merely being Ravindra Jadeja lite. The general consensus being that he is basically Ravindra Jadeja, but worse.

Is this true? Well, not exactly.

While both Axar and Jadeja are all-rounders, they are not exactly the same type of all-rounders. In Axar, you have someone who is primarily an out-and-out bowler that is more-than-handy with the bat. Jadeja, on the other hand, has evolved into someone that possesses x-factor with both bat and ball, but is particularly neither a specialist batter nor a specialist bowler.

Evidently, Axar being a Jadeja prototype has been one of the primary reasons behind him being actively involved in the Indian set-up, but while the term ‘like-for-like’ has become synonymous with the all-rounder, the truth is that Axar brings to the fore his own package.

What is it about Axar’s skillset that makes him so much more than simply a Jadeja lite? Let's decode.

Axar vs Jadeja: a bowling comparison

Much of Axar’s comparison with Jadeja stems from the fact that he has a palpably similar style to that of the latter: very quick, very accurate and always at the stumps. Both are, in a way, your ‘you miss, I hit’ kind of bowlers. But a quick glance at the numbers will make you realize that in T20 cricket, Axar, if anything, is Jadeja Pro with the ball in hand.

To begin with, since the start of 2020, Axar has been significantly better than his compatriot with the ball in the shortest format.

But there is far more to it than just the overall numbers.

For a start, Axar is a significantly better bowler against left-handers than Jadeja.

Consider this: in all T20s since the start of 2020, Axar has averaged 28.2 against the lefties while maintaining an economy of 8.3. During this period he’s also accounted for 13 LHB wickets in 44 overs, striking once every 20.4 balls.

In comparison, Jadeja has averaged an eye-watering 54.6 against the lefties while leaking at an ER of 9.1.

You could probably make a case for Jadeja being a more valuable bowler in the case of him having a stupendously good record against right-handers — the favorable match-up for left-arm spinners — but the duo pretty much boasting an identical record against righties serves as evidence for the fact that Axar is simply better.

What seals the Axar vs Jadeja debate with the ball is the former’s proficiency with the new ball; his ability to nail it up-front.

Among all spinners to have taken 15 or more wickets in the first six in this period, only three — Hasaranga, Tahir and Umar Adam — have maintained a better strike rate. 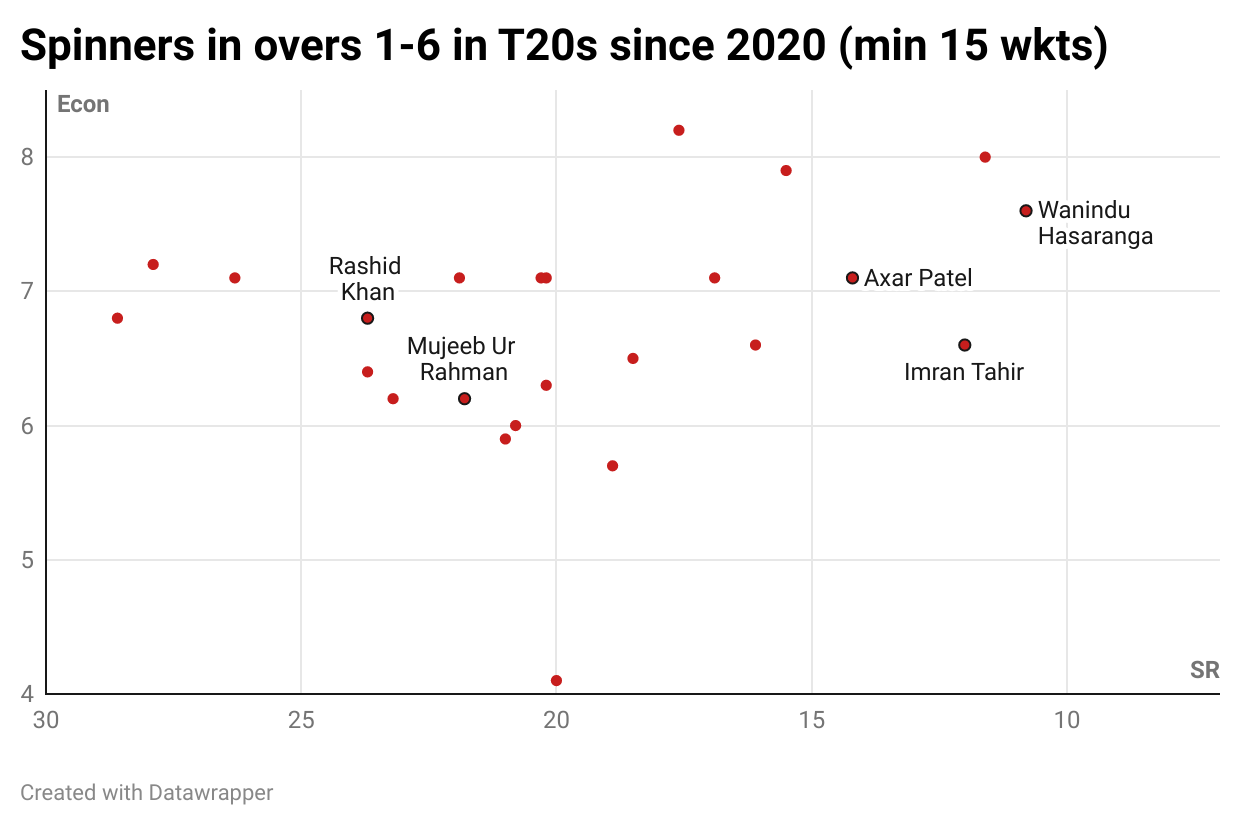 In fact, against Australia last week, Axar’s prowess in the powerplay was integral to India winning the series as the left-arm spinner ravaged the visitors with the new ball, taking 4 wickets in 6 overs.

Compare this to Jadeja, who has sent down a total of just six overs in the powerplay across the past three years.

This, right here, is what separates Axar from Jadeja on the bowling front. His mastery with the new ball adds a whole new dimension to the side; it not only gives Rohit Sharma another potent option with the ball up-front that can be used effectively pertinent to conditions, opposition and match situation, but also provides the skipper with flexibility.

Axar with the bat: mixed record, but a batter on the rise

So, it has now been established that in Axar’s presence, India will not miss Jadeja with the ball in hand. In many ways, if anything, they’ve found themselves an upgrade.

But what of the batting front?

Admittedly, Axar, despite being extremely handy with the bat in hand, is still a couple of tiers beneath Jadeja as an overall batter. But it can be said that how one judges Axar the batter ultimately comes down to perspective.

The glass-half-empty way of seeing things is that Axar, all through his career, has been an average-at-best T20 batter who has merely played a handful of impactful knocks, a good chunk of them coming in IPL 2022.

He doesn’t exactly cover himself in glory with his IPL batting average of 19.24 and his record in the IPL across the past five years — averaging more than 20 just once — suggests that his IPL 2022 numbers ought to be taken with a pinch of salt.

Even if you were to make that ‘don’t look at average for a lower-order batter, look at the strike rate’ argument, since 2018, IPL 2022 is the only season in which the southpaw has struck at over 140.

On the contrary, if we were to look at things from a glass-half-full perspective, then Axar is someone that’s finally starting to realize his potential with the bat in white-ball cricket, slowly but steadily.

IPL 2022 saw the southpaw amass 182 runs at an average of 45.50 and a strike rate of 151.67, and there he played many a whirlwind cameo that terrorized the opposition. Notably, however, he’s been building on that success and has since shown glimpses that reiterate the fact that he’s moved to the next level with the bat.

Different format, but in Port of Spain in July, Axar played the single best knock of his white-ball career, smashing an unbeaten 35-ball 64* (that included five monstrous sixes) to help India complete an improbable chase.

Then, later in the same tour, in the fourth T20I in Lauderhill, walking in the 19th over, he played a crucial cameo — 20* off 8 balls, featuring 2 sixes — that essentially batted West Indies out of the contest.

Opportunities with the bat for Axar have been few and far between since IPL 2022, but in the limited chances he’s gotten, the southpaw has impressed, making vital contributions that have been small but invaluable.

Axar vs Jadeja: a batting comparison

So, what are the boxes Jadeja ticks that Axar doesn't?

For a start — and this is crucial — assurity, consistency and bankability. On any given day, India would trust Jadeja to take the side home if the equation is, say, 30 needed off 3 overs. This is because he is simply a more well-established batter. Make no mistake, Axar has it in his armory too, but from what we know, the success rate will be far lower.

There will also be a relative downgrade on the pace-hitting front.

Axar himself is a pretty good pace-hitter, but Jadeja has been so good in the past three years that his record dwarfs that of the former.

Axar’s SR of 142.42 against the quicks in all T20s since 2020 is pretty impressive. But then there is Jadeja, who in the same period has struck at nearly 170 against the faster men.

That being said, Axar’s marked improvement in destroying pace in IPL 2022 — striking at 169.6 overall and 195 at the death — once again suggests that he is on the rise, and, on his day, could be as destructive as Jadeja.

The curious comparison on the batting front is their prowess against spin. For as good as Jadeja has been in the shortest format in the past three years, his numbers against spin have been mediocre.

In all T20s since 2020, Jadeja has struck at a shocking 83.11 versus spinners. Leg-spinners and left-arm orthodox are supposed to be ‘favorable’ match-ups for lefties, but Jadeja’s SR against the two types read 76.8 and 116.7 respectively.

Comparing relatively, Axar has been far more proficient against spin. Since 2020 he’s struck at 121.79 overall, and has destroyed left-arm spin, striking at a mind-boggling 205.6 against his favorable match-up. Although the caveat here is that this is a pretty small sample size, 18 balls in which he’s blasted 37 runs.

That being said, Axar has also struggled against both off-spin and leg-spin. While he’s struck at just 84.2 against the offies, his SR against leg-spinners reads just 102.4 despite the ball turning into him. 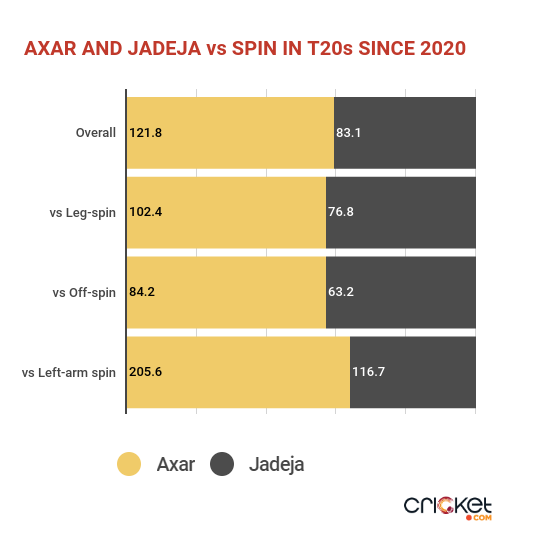 All things considered, then, we can probably deduce that Axar is naturally a better striker of spin than Jadeja. However, there is still no real evidence to suggest that he can nail the role of being a floater that destroys spin in the middle-overs.

Losing Jadeja is a body blow for the Indian side but if we are to factor in everything, then Axar is as good a replacement as the Men in Blue could have hoped for.

In Axar they get a more dynamic bowler that can be trusted to deliver four overs on most days. The trade-off is that there’s a drop in the quality of batting, but nevertheless, the southpaw has shown that, on his day, he has the ability to put bowlers to the sword and win matches single-handedly. Most importantly the 28-year-old is skilled and established enough to walk in early, bat a couple of overs and delay DK’s entry point and that, one assumes, is massive.