Back to where it all started for Ben Stokes 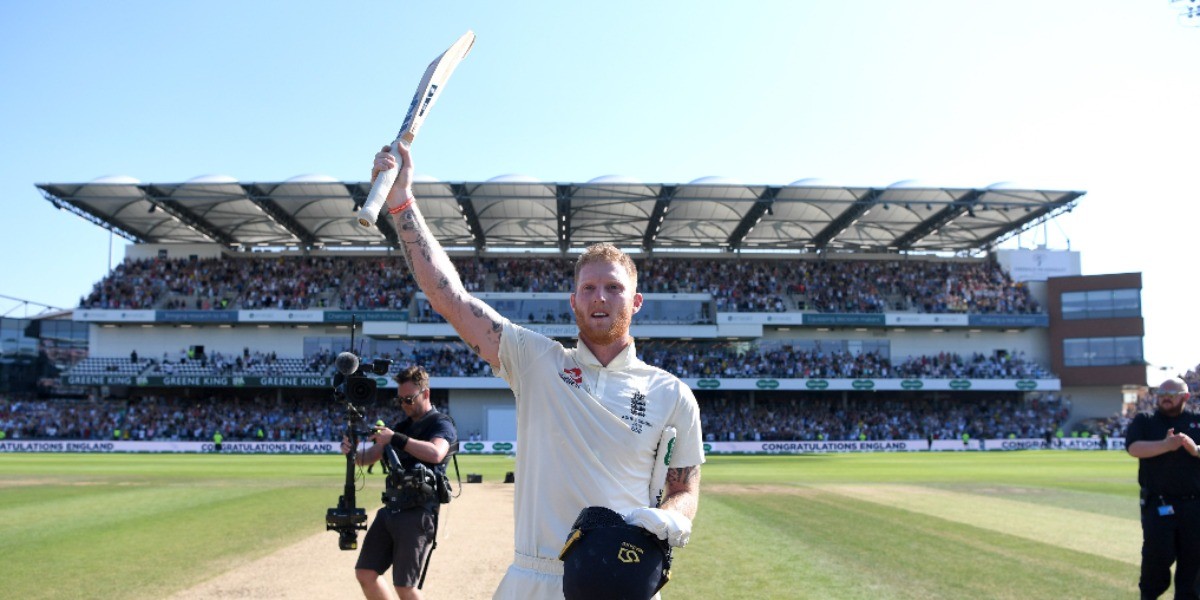 Back to where it all started for Ben Stokes

Eight years after his debut, Stokes returns to Australia, the place where it all started for him

Heading into the 2013/14 Ashes, there was a spark around in the England camp, the hype was around a 22-year-old all-rounder, who was in line to make his debut in the longest format – Benjamin Andrew Stokes. But his debut with the ball didn’t quite light up the expectations, he overstepped on numerous times as England spent a long time on the field.

But his main claim to fame heading into the series was the fact that he was sent home from a Lions tour for disciplinary reasons. Even though Paul Collingwood, then at Durham, called the young Lion a “world-beater”, his initial impression was negative.

Going into the 2021 Ashes, Stokes isn’t a hyped youngster anymore, he walks in as a man through the thick and thin of all journeys, on and off the field. It doesn’t get bigger than this, a World-Cup winner returning to a place where it all began.

Stokes isn’t a destination, he is a journey

Stokes’ first Ashes Test wasn’t a complete disaster, he picked up two wickets, scored 29 runs, but the expectations from him since then has changed. In 2021, in the most Stokes of comparisons, it was a bad all-round display. But from there, Stokes did a Stokes.

He ended the 2013 series Down Under as the third-highest run-scorer for England, with 279 runs, including a fighting 120 in the third Test, at Perth, where England were chasing 504 runs in the fourth innings of the Test. And with the ball, he was the Three Lions’ second highest wicket taker, with 15 wickets just behind Stuart Broad, averaging 32.8. 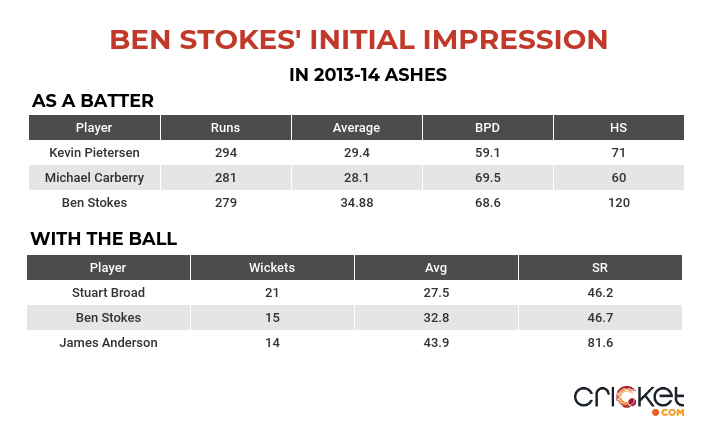 Australia ended the series with a whitewash, England with a lesson and a new talent: Stokes. It had been long since the Three Lions found a perfect all-rounder, a true heir to Andrew Flintoff. The Guardian called Stokes’ 120 as “It may be the most significant innings by an England player this decade.”

"I thought Ben Stokes' innings shows the amount of talent there is in English cricket. That was an outstanding hundred in the circumstances, with the backs to the wall and on a wicket like that," said Cook despite England’s loss at the hands of Australia.

That was the initial impression of the all-rounder and all of that in Australia, home of the arch-rivals and amidst a scrutinizing media. It was a series where the Three Lions suffered but Stokes not just survived but he prospered.

“Stokes will now become a key figure in the post-Ashes rebuilding process,” The Guardian added.

And that was the day when the all-rounder truly arrived and England cricket hasn’t turned back, ever since.

Drama, Trauma and the miss

Having made the Australian crowd stand up on their feet, much like Ronaldinho made the crowd at the Santiago Bernabeu applaud on their feet, Stokes’ career took a plunge, spiraling downwards.

Very often in a team sport, talent isn’t the only comparable factor, off the field action also defines the caliber of a player and unfortunately for Stokes, it would go on to determine the second phase of his career. The phase that not just broke but tore him apart, and threatened to take the sport away from him.

The year is 2017, England return to Australia in completing their conquest of lifting the Urn but Stokes’ absence makes the headline. Just ahead of the Ashes, the all-rounder was suspended regarding the incident on a night out in Bristol.

"Ben has been and is developing into a world-class cricketer. The fact he's not out there at the moment is a blow to the England team,” said Andrew Strauss, the last Ashes winning skipper in Australia (2010-11).

Australia won the series 4-0, showed England they were no match to them. It was the 2017 series that defined Stokes, not for his presence but his absence.

The second life for Stokes

Since March 22, 2018: his return to Test cricket, Stokes has stood out, be it with the bat or the ball in the longest format. While he might have scored a duck on his return, his consistency since then for England with the bat has been a tale of incredible talent. Four Test centuries, single-handed heroics in the Cape Town and in Leeds where the southpaw took his side home, with one wicket to spare. 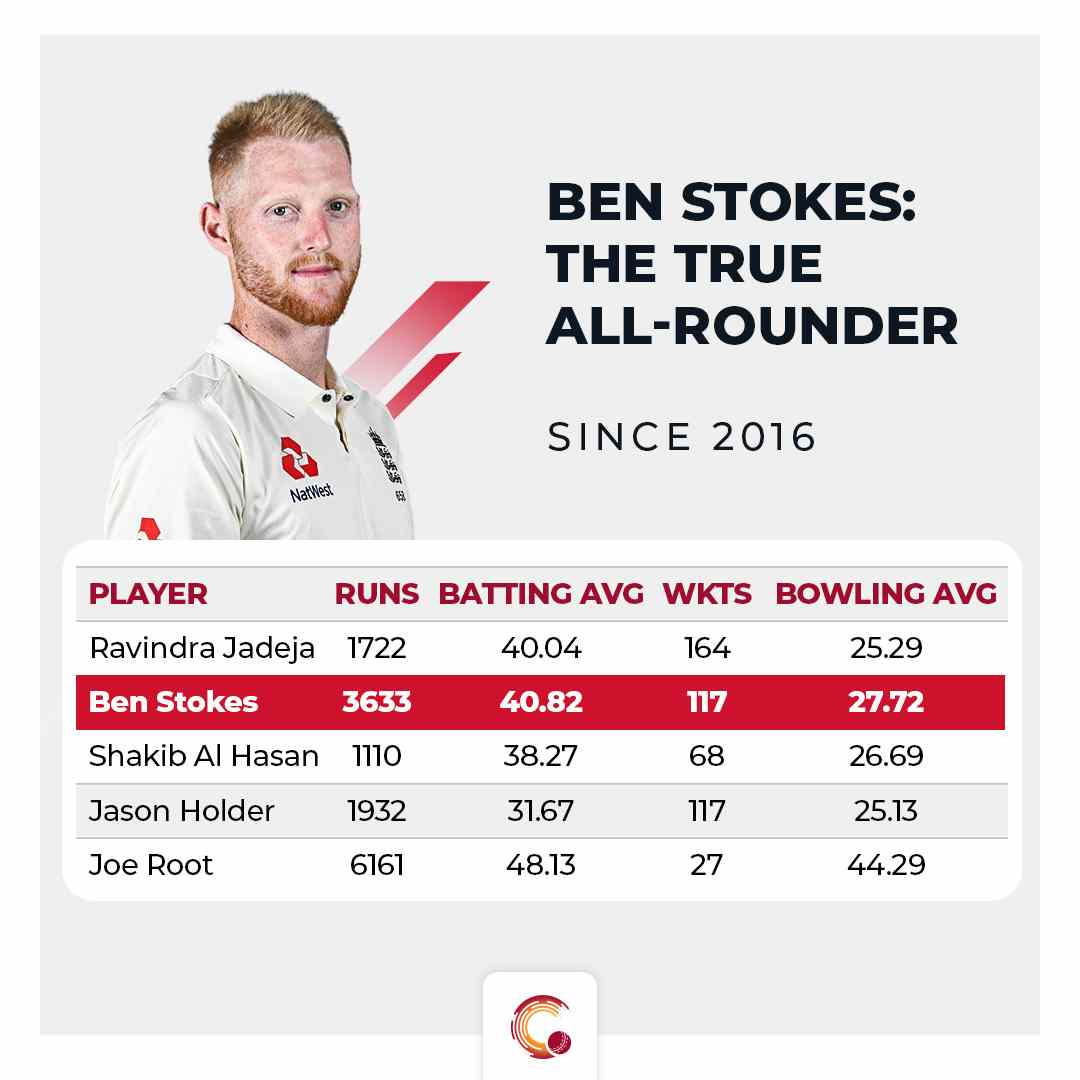 The last series that these two sides locked horns would paint the perfect picture of Ben Stokes – the all-rounder. In the second Test at Lord’s, the all-rounder, on a tough surface to bat on, topped the scoring in the Test match, with an unbeaten 115 in the second innings, showing grit, determination and hard work at the crease.

But when these two sides met in Leeds, he single-handedly tormented Australia with an innings of lifetime. First with the ball, he picked up four wickets and then with the bat, played his best innings in a long time. When Joe Denly was dismissed, the Three Lions were still on 3/141, needing 359 runs to win, playing last on the broken surface.

Going up against a menacing bowling unit in the form of Australia, Stokes battled against all odds, literally and figuratively to snatch home the most scintillating of wins for England. But more importantly, throughout the phase after his return, Stokes has ably doubled up as quintessentially the best all-rounder in Test cricket.

Back to where it all started

Ben Stokes returns to where it all began, Australia, having missed the previous tour due to disciplinary reasons.

But since the 2013 Ashes, largely nothing has changed in England, with the Three Lions still building for the future. And as The Guardian had pointed out it in 2013, all those ‘I was there when Stokes hit his maiden Test century’ would be welcomed yet again.

Stokes has a rare opportunity in front of him: to continue what he began in Australia, the conquest of striving for greatness, all on his return to the game.