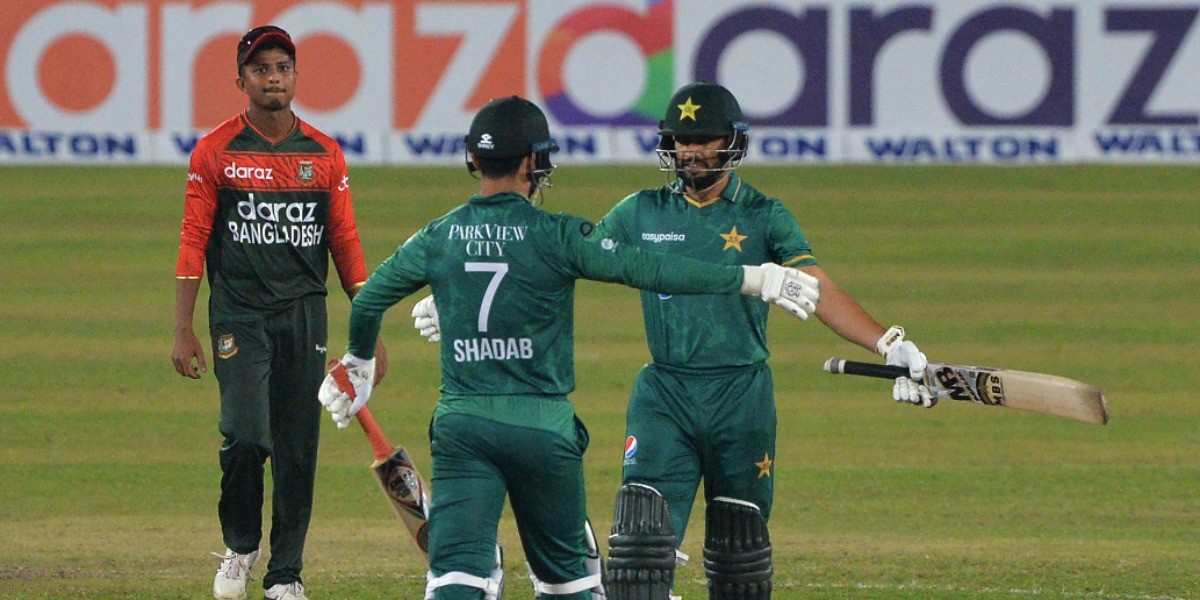 Shadab Khan (21* off 10) and Mohammad Nawaz (18*8) provided the much-needed impetus at the end to take Pakistan home in the first T20 International (T20I) against Bangladesh at the Shere Bangla Stadium, Mirpur. This was the first game for both sides after the T20 World Cup and Bangladesh's sixth loss in a row in T20Is.

Chasing 128, Pakistan had lost four wickets in the powerplay, including that of Babar Azam and Mohammad Rizwan with just 24 runs on the board. The onus was then on Fakhar Zaman (34) and Khushdil Shah (34) to rebuild and they did that with a crucial 54-run stand for the fifth wicket to bring their side back in the reckoning. 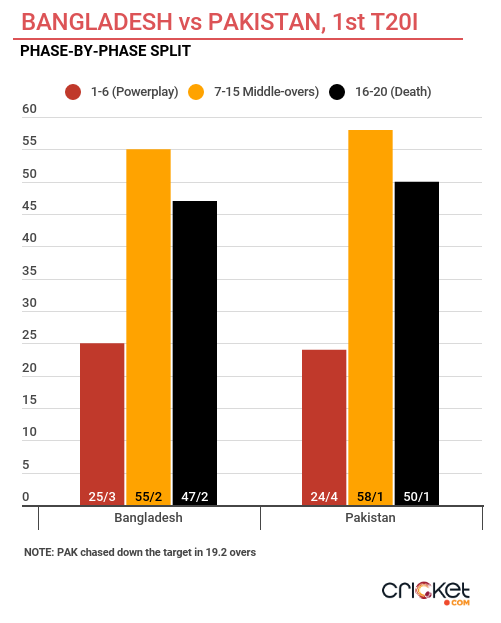 When Zaman and Khushdil Shah perished, Pakistan still needed 32 runs more to win off 19 deliveries. That's when Shadab and Nawaz took over, finding the ropes on a regular basis to help Pakistan take a 1-0 lead in the three-match series, with four-wicket in hand.

After electing to bat first, Bangladesh too did not get off to the best of starts, however, Afif Hossain played responsibly to score 36 off 34 deliveries to give his side a chance of putting up a decent total.

Once he was dismissed with over seven overs to go, Nurul Hasan (28) and Mahedi Hasan (30*) took Bangladesh past 125 and gave their bowlers something to bowl at.

Hasan Ali was the pick of the Pakistan bowlers with figures of 3 for 22. He bowled with great accuracy and with a bit of swing on offer early on, the pacer made full use of it. He was well supported by Mohammad Wasim (2 for 24), Shadab (1 for 20) and Nawaz (1 for 27).

The Bangladesh bowlers had the Pakistan batters exactly where they wanted before Shadab and Nawaz powered their way to hand Pakistan a victory, despite the best of efforts from Mustafizur Rahman and co.

Bangladesh will have a chance to draw level when they take on Pakistan on Saturday (November 20) at the same venue. Bangladesh did manage to beat Australia and New Zealand at home ahead of the T20 World Cup and will be hopeful extending that run.

Player of the match: Hasan Ali