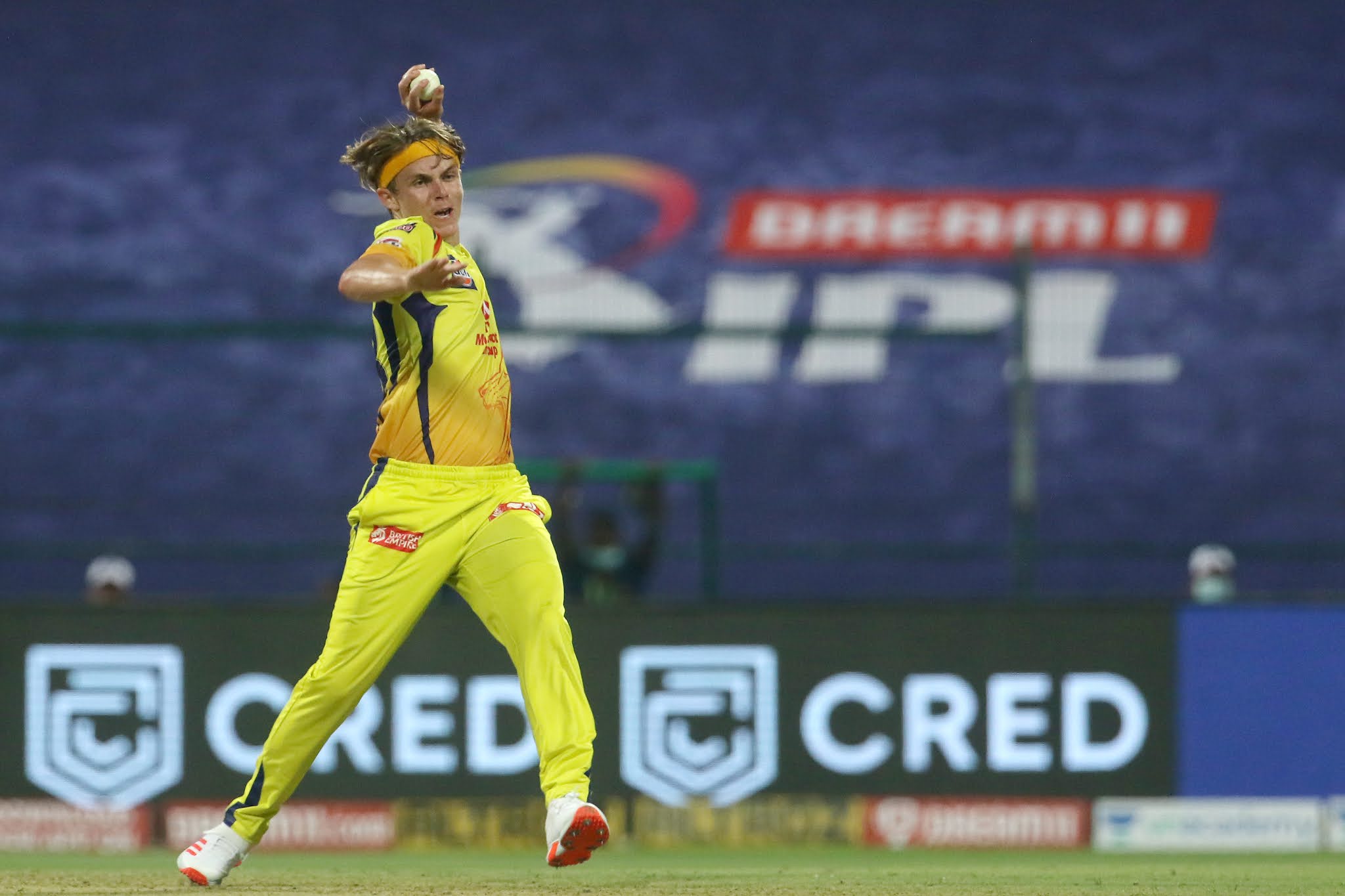 On Thursday, for the first time in the history of the Indian Premier League (IPL), Chennai Super Kings (CSK) will take the field knowing that they have no chance of making it to the playoffs. It’s been a disappointing campaign for MS Dhoni and co., but they would have gained some confidence after defeating Royal Challengers Bangalore (RCB) convincingly on Sunday.

Meanwhile, Kolkata Knight Riders (KKR) still have a chance of making it to the playoffs, but their hopes took a severe hit when they lost to Kings XI Punjab (KXIP) on Monday. After starting the tournament in fine fashion, the Knight Riders have lost four out of their last six matches which has seen them drop out of the top four.

CSK have been the better team in this fixture over the years, having defeated KKR 13 times in 21 matches in the IPL. While the team from Chennai have won three out of the last five games against Kolkata, it was the latter who came out on top in the reverse fixture this season. 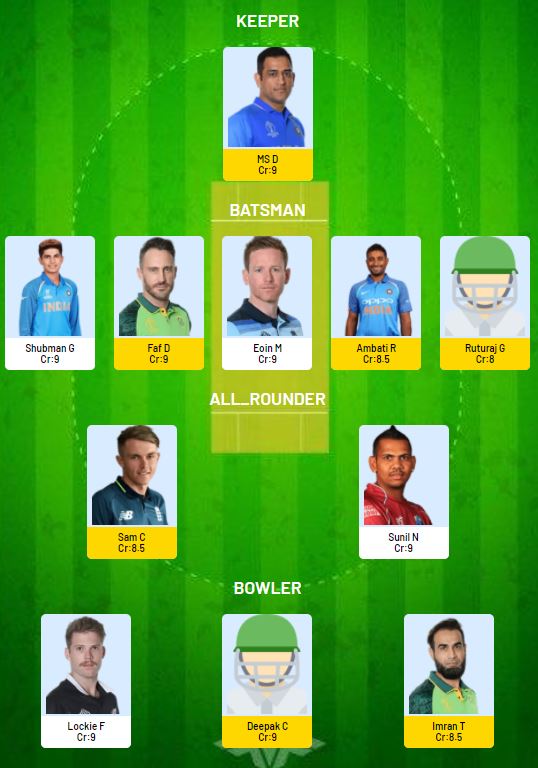 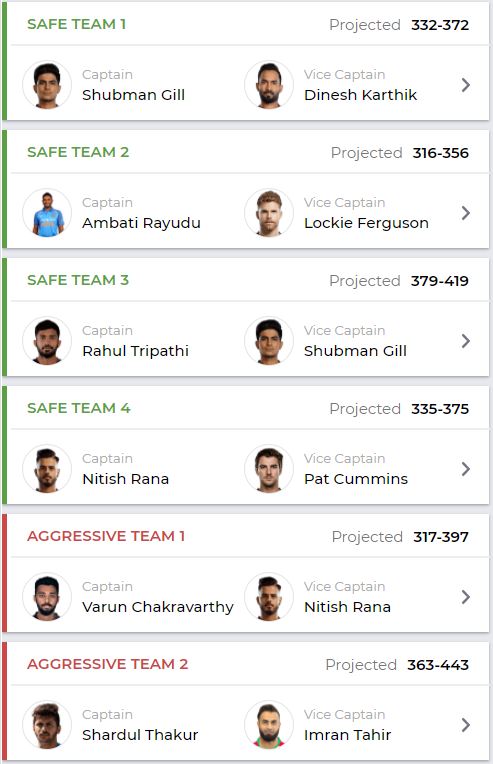 This will be the 22nd match of the season at the Dubai International Cricket Stadium. In 21 games held at this venue in IPL 2020, teams batting first have come out on top in 14 matches. But while stats might be in favour of teams batting first on the whole, it’s important to note that five out of the last seven matches here have been won by the teams chasing (one via a Super Over). 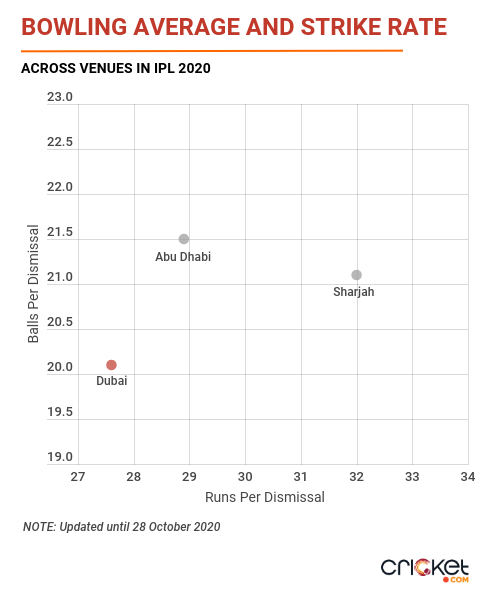 In the 21 matches in Dubai this season, pacers have taken 148 wickets while spinners have accounted for 77 dismissals. While the faster bowlers have bowled 61.5% of the deliveries, they have taken 65.8% of the wickets which is a sign that they are likelier to take more wickets.

While watching matches that are taking place in Dubai, you might have thought that spinners have been doing a better job and it wouldn’t be wrong of you to make such an assessment. After all, spinners (7.4) have had a much better economy rate than pacers (8.6) at this venue this season so far. But in fantasy cricket, the rate at which bowlers concede runs counts for little when compared to wickets and, on that front, the quicker bowlers come out on top.

Another telling stat in favour of pacers is that when comparing bowling strike rates, they lead spinners by 4.2 deliveries per wicket in Dubai during IPL 2020.

Going by the above stats, we have picked three pacers and two spinners in our team. If you feel another fast bowler is necessary, then you can look at bringing in Pat Cummins for Imran Tahir. Budget shouldn’t be a concern at all as players in this match don’t come with high credits. 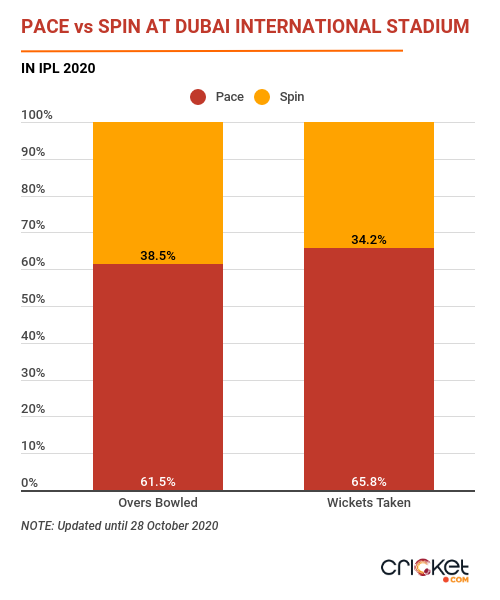 Faf du Plessis started IPL 2020 excellently, but his performances have dropped a little in recent games. On the other hand, Pat Cummins hasn’t had a great tournament, especially when you consider his wicket-taking form. In T20 cricket, Cummins has dismissed du Plessis twice so far, but the former South African captain has maintained a healthy batting strike rate of 143.2. 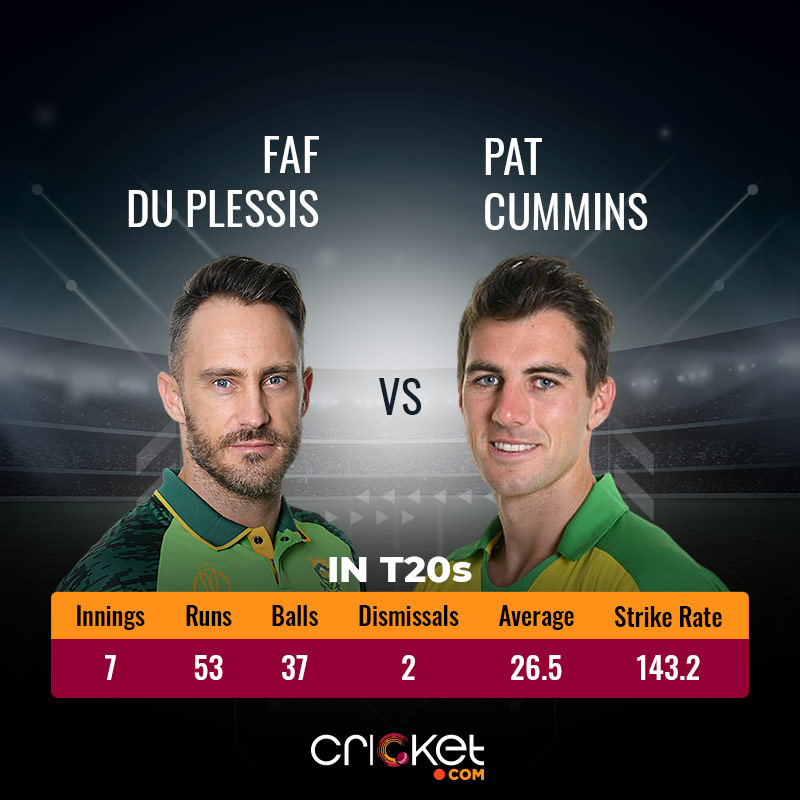 MS Dhoni and Sunil Narine are, without question, two of the greatest-ever IPL cricketers. But when the duo have come up against each other, there has tended to be only one winner and that has been the KKR mystery spinner. Narine has bowled 80 deliveries to Dhoni in T20 cricket and has restricted him to a batting strike rate of below 50 which is quite unbelievable. 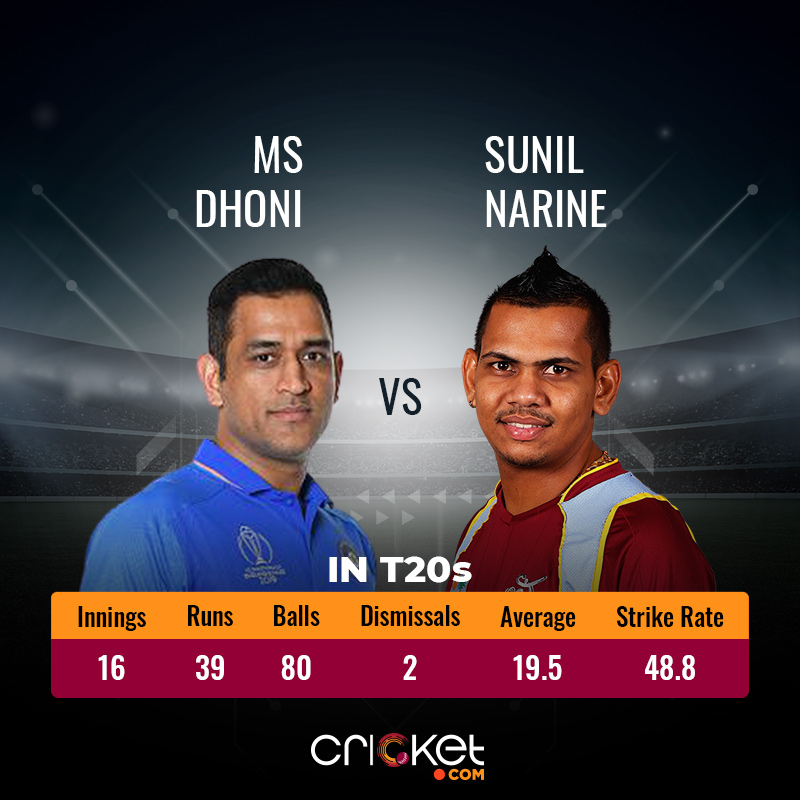 After two brilliant knocks to start off with, Rahul Tripathi’s form has taken a dip in recent matches. The fact that his batting position has changed a few times hasn’t helped him. In the last two matches, he has batted at number three. So, if an early wicket falls, there’s a good chance we could see Tripathi coming up against Deepak Chahar – a bowler he has enjoyed facing so far as a batting strike rate of 182.6 in T20 cricket indicates. 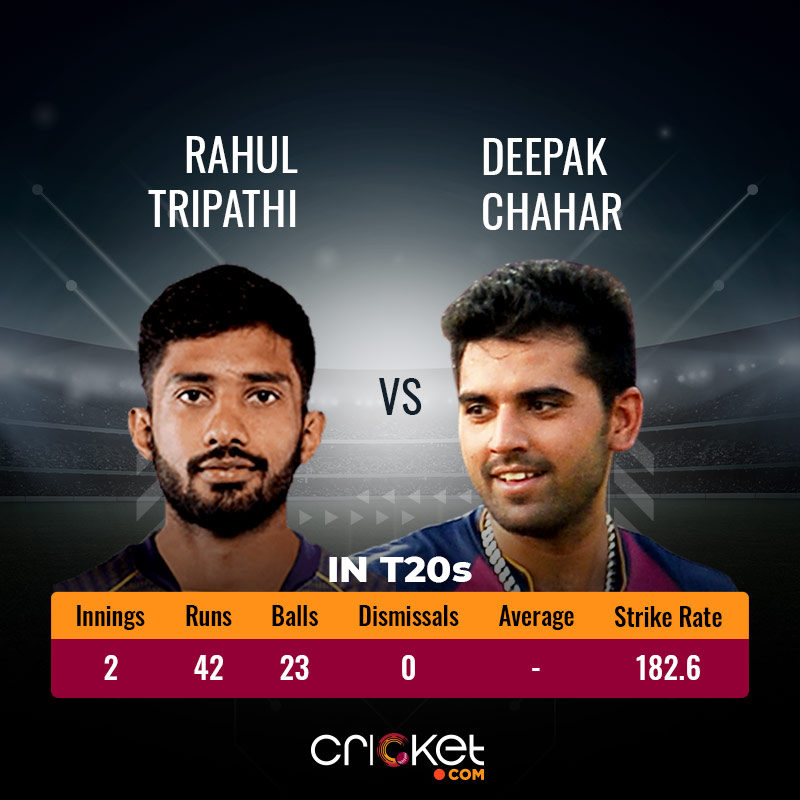 KKR’s middle-order has really struggled this season with only Eoin Morgan doing reasonably well. So, for the Knight Riders, Morgan is likely to play a crucial part during the middle overs and that could see him come up against Imran Tahir. Morgan has a batting strike rate of 144.4 but has been dismissed twice by Tahir in T20 cricket so far. 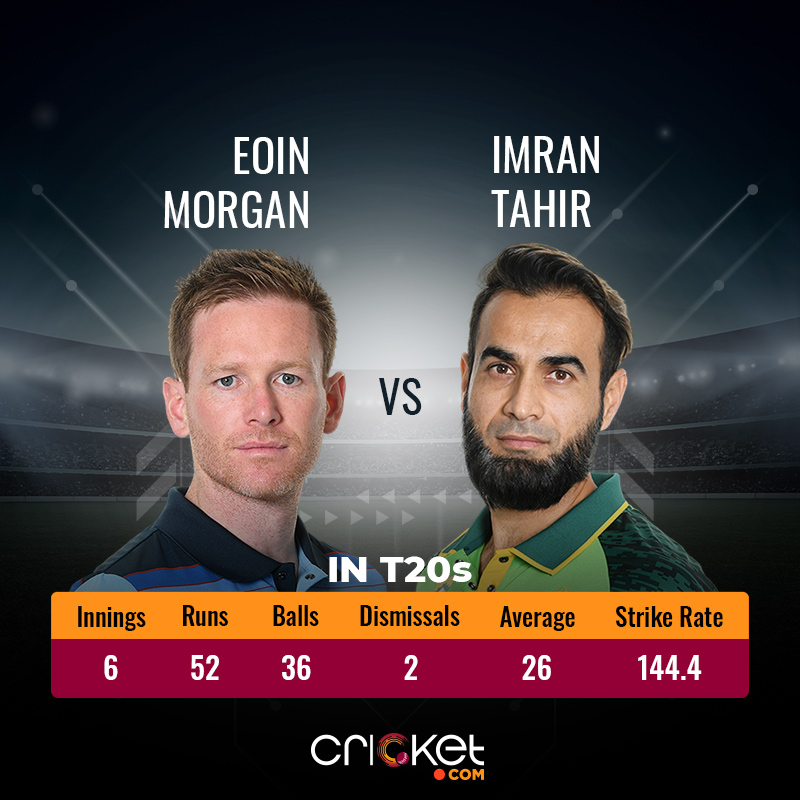 Despite CSK enduring a forgettable season, Sam Curran has been excellent. Be it with bat or ball, Curran has performed when called upon by his team. His all-round abilities were there to be seen during CSK’s previous two matches. Against Mumbai Indians, after an incredible batting collapse, he scored a half-century. In the next match versus RCB, he took three wickets. In 12 matches this season, he has scored 173 runs and taken 13 wickets so far.

Our Criclytics player projector predicts Curran could score 11-34 runs and could take 0-1 wickets in this match.

From a run-scoring perspective, Shubman Gill is having his best IPL season yet – so far, he has scored 378 runs at an average of 34.4. Yes, his strike rate of 113.9 is a bit of a worry, but in fantasy cricket, volume of runs matter much more than scoring rate. Against KXIP on Monday, Gill notched up his third fifty of the season and will be looking to build from there as KKR gear up for a couple of season-defining matches.

As mentioned earlier, Faf du Plessis got off to an amazing start in IPL 2020, but his form has tailored off a little recently. In his last six innings, he has managed only one half-century while being dismissed for single-digit scores thrice. But as we’ve been reminded many times in the past, top players like du Plessis can produce their best at any given time. The CSK opener has scored 401 runs at an average of 40.1 and strike rate of 140.7 so far this season.

Our Criclytics player projector predicts du Plessis could score 14-37 runs in this match.

Sunil Narine returned to KKR’s line-up with a changed bowling action against Delhi Capitals (DC) last Saturday. While he hasn’t picked up a wicket in two matches since, it’ll still be quite risky to not select him in your fantasy team. The reason being that in that match against DC, he reminded us of his batting abilities and showed that he can still get you points without being prolific with the ball.

Our Criclytics player projector predicts Narine could score 10-33 runs and could take 1-2 wickets in this match.

Two-time IPL-winning captain Gautam Gambhir has selected Narine as his captain for this match.