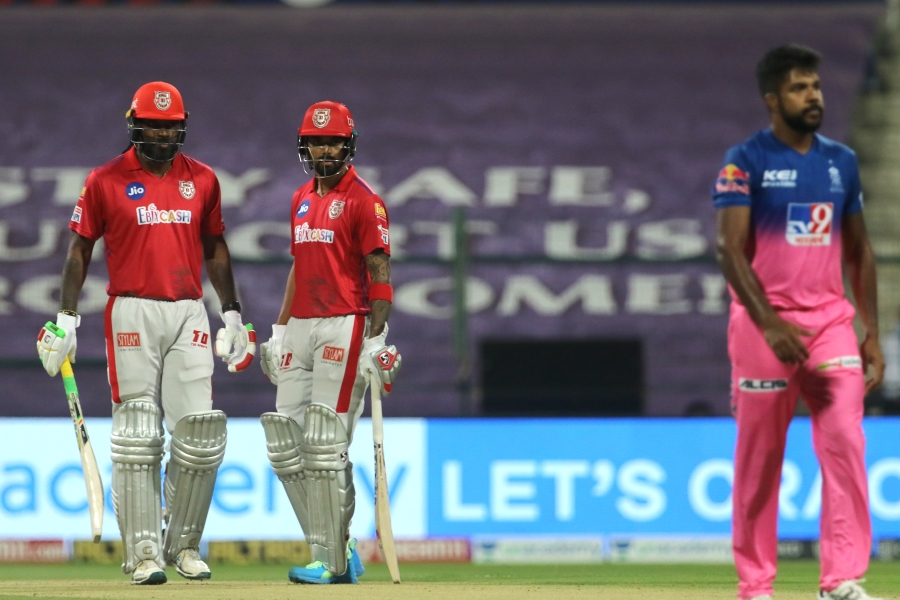 Rajasthan kept their playoff hopes alive with a convincing win over Punjab. Here are the major statistical highlights from the game:

Apart from batting and bowling, fielding is one of the parameters that shifts the momentum of a game, especially in T20s. Dropping catches at crunch situations haunt in the aftermath. In IPL 2020, none other than Rajasthan Royals could explain this better. However, it is a different thing that they won against Kings XI Punjab. Still, they have suffered the most when their fielders have dropped catches. Chris Gayle was dropped by Riyan Parag when he was batting on 10, there on, Gayle went on to score 89 runs more. Overall in this season of IPL, RR's drop catches have cost them 314 runs, which is the most for a team. 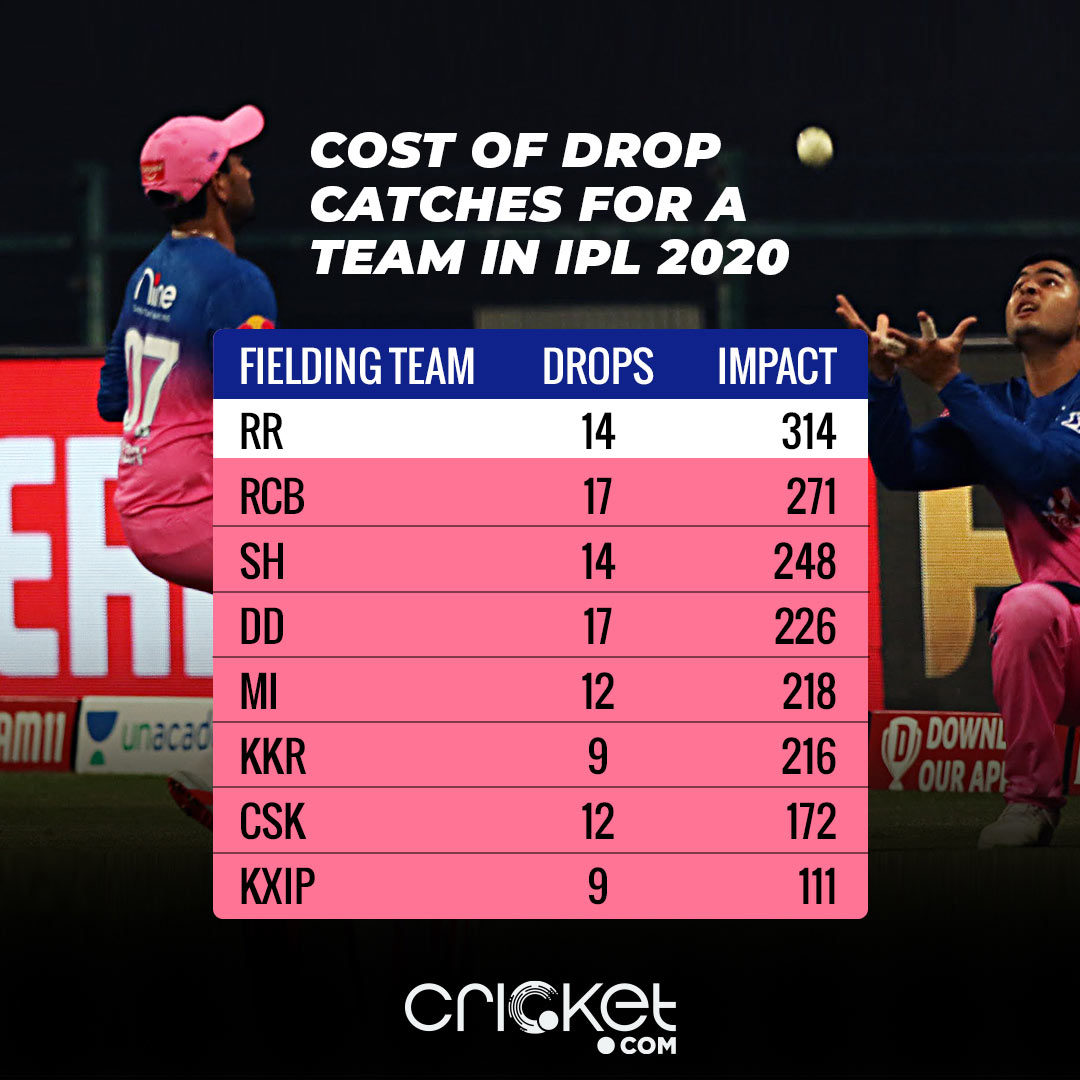 Most consecutive years scoring 500+ runs in a season of IPL

What a turnaround it has been for KL Rahul since 2018 in IPL. A batsman who struggled to cross the 400-run mark in a season of IPL, has been amongst the 500 club on a consistent basis. It started in 2018, when he scored 659 runs for KXIP. He followed it up with another exceptional season for KXIP scoring nearly 600 runs in 2019. In this season, yet again, Rahul breached the 600 mark in his match against RR. Thus, he became the third batsman in IPL to score 500+ runs in three consecutive seasons. David Warner has the most scoring 500+ runs in five consecutive years starting from 2014 till 2019. 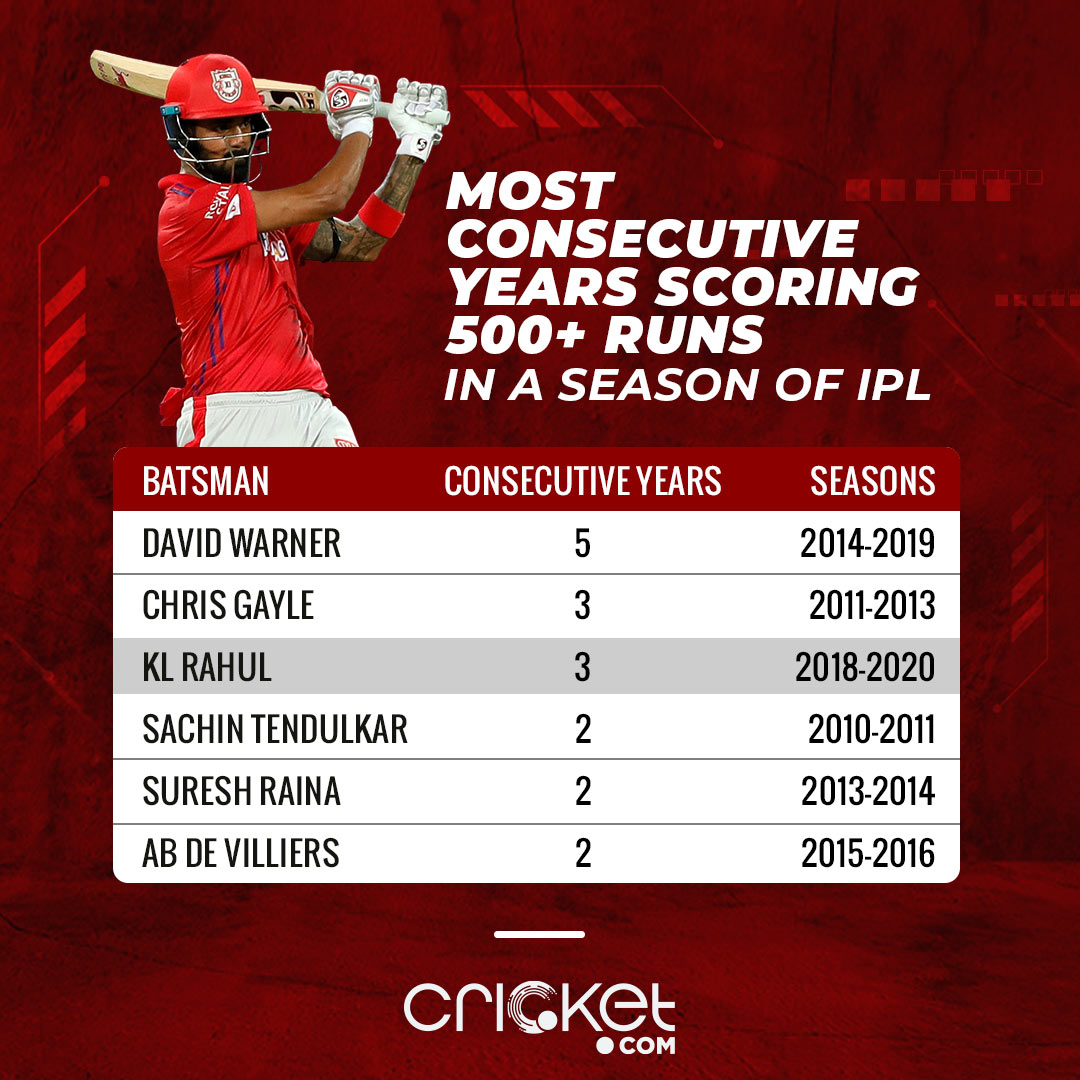 Most sixes in T20s

6006 runs through sixes and 4164 runs through fours. In total, 10170 runs through boundaries, which is 25 runs more than the third-highest run-scorer in T20s, Shoaib Malik (10,145). That sums up the career of Christopher Henry Gayle aka “the universe boss”. Prior to this match, Gayle had 993 sixes to his name in T20s, which is 303 sixes more than Kieron Pollard’s tally of 690. Against RR, Gayle clubbed eight sixes. He thus became the first ever batsman to reach 1000 sixes in a single format of the game. 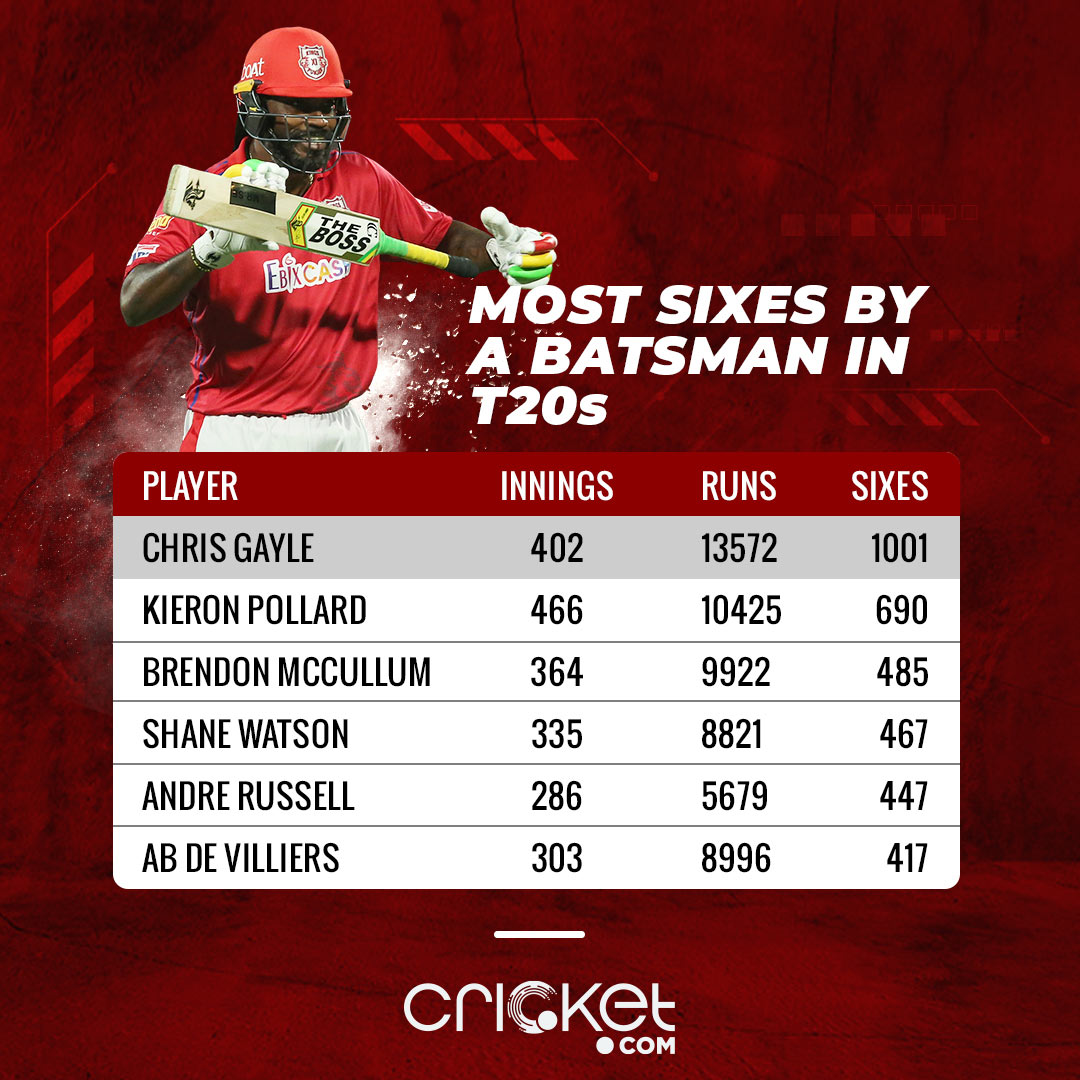 Though, the big man from West Indies has 22 centuries to his name – the most for a batsman in the format – Gayle’s frustration when he got out on 99 was evident to see. Thus, Gayle became the fourth batsman in IPL to be dismissed on 99. He has a 99 not out against his former franchise, Royal Challengers Bangalore in 2019. The first batsman in IPL to be dismissed of a 99 was Virat Kohli in 2013 against Delhi Capitals. 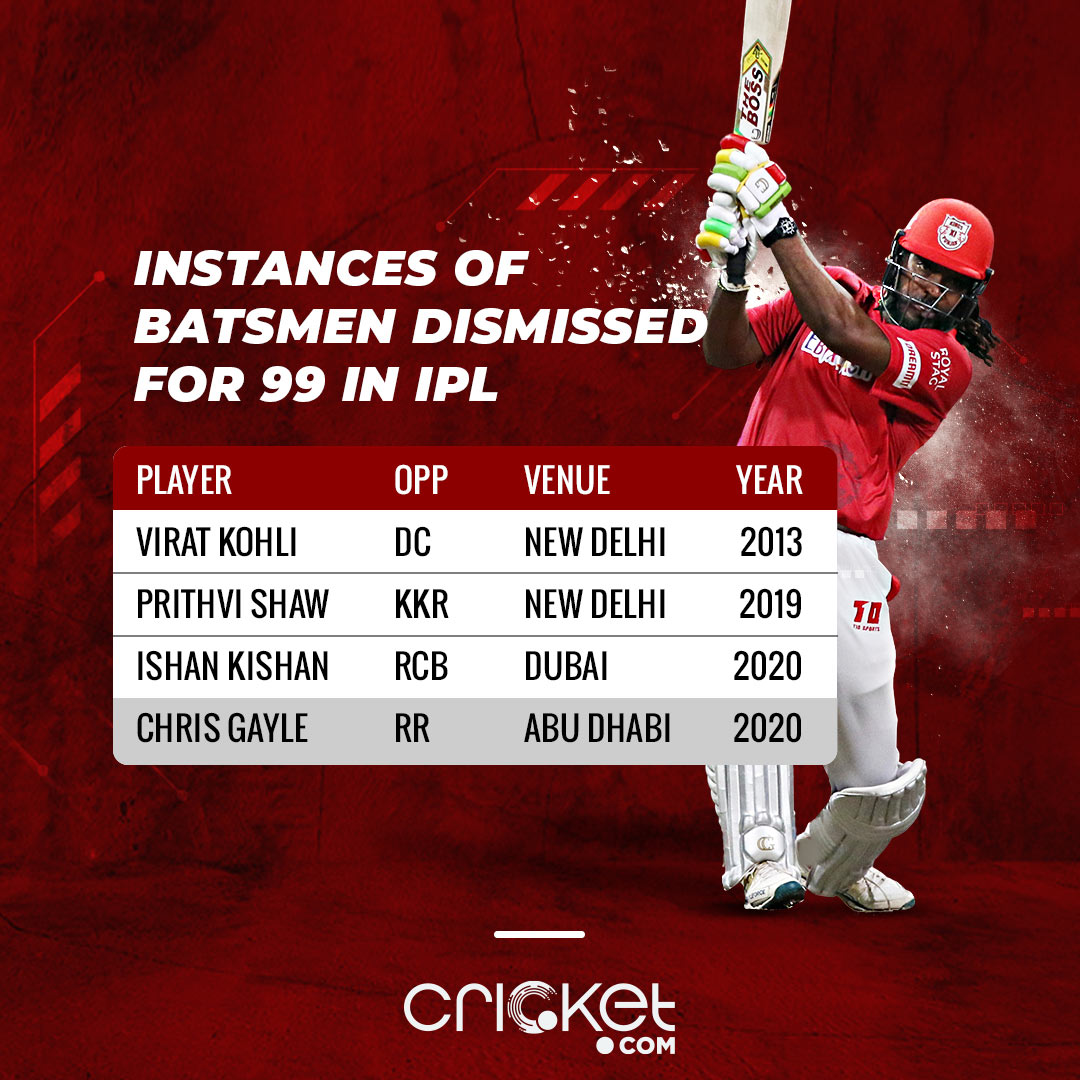 Second Rajasthan Royals batsman to score a 50 within the Powerplay

On the back of a stupendous match-winning century against Mumbai Indians, the intent, the strokeplay and mainly his confidence from Ben Stokes are at the summit. Chasing a moderate target of 186, Stoke was off to a flyer. Out of the 66 runs scored by RR in the Powerplay, Stokes himself had scored 50 runs. Hence, he became the second RR batsman to post a half-century within the Powerplay in IPL (In a complete 20-over match). Michael Lumb against KXIP in 2010 was the first RR batsman to achieve this.

Across the years of IPL, RR has been one of those teams that has hardly produced six-hitting giants. However, this season it has been a different story for them. From the current squad though there are a few batsmen who hit along the ground. This has been one of the reasons why they are only the second team to club 100 sixes in this season of IPL. Also, this is the first time across their 11 editions of IPL that RR have hoisted 100 sixes in a single season. There are four batsmen from the RR squad, who have smashed over 10 sixes. Sanju Samson leads the charts overall this season with 26 sixes to his name. 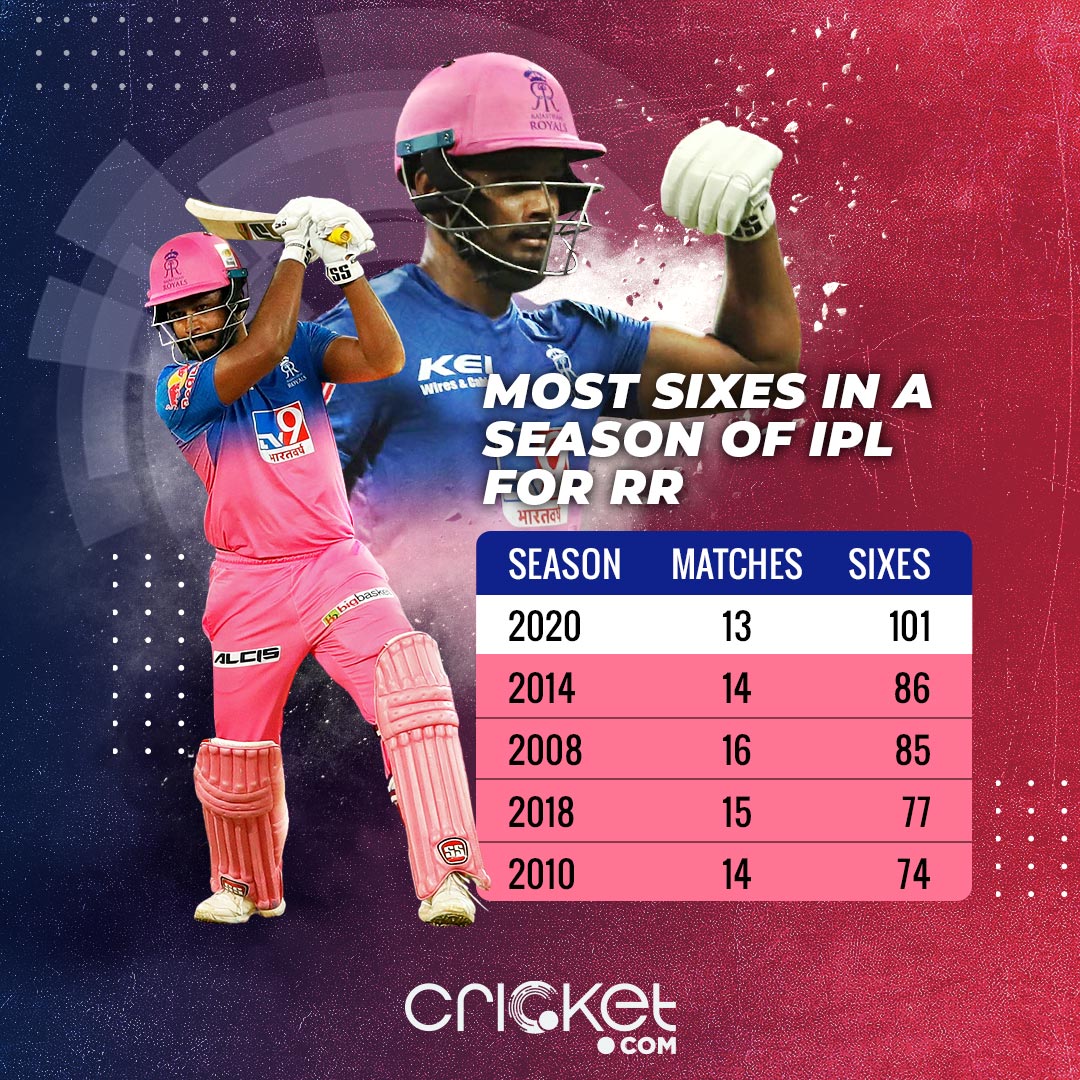