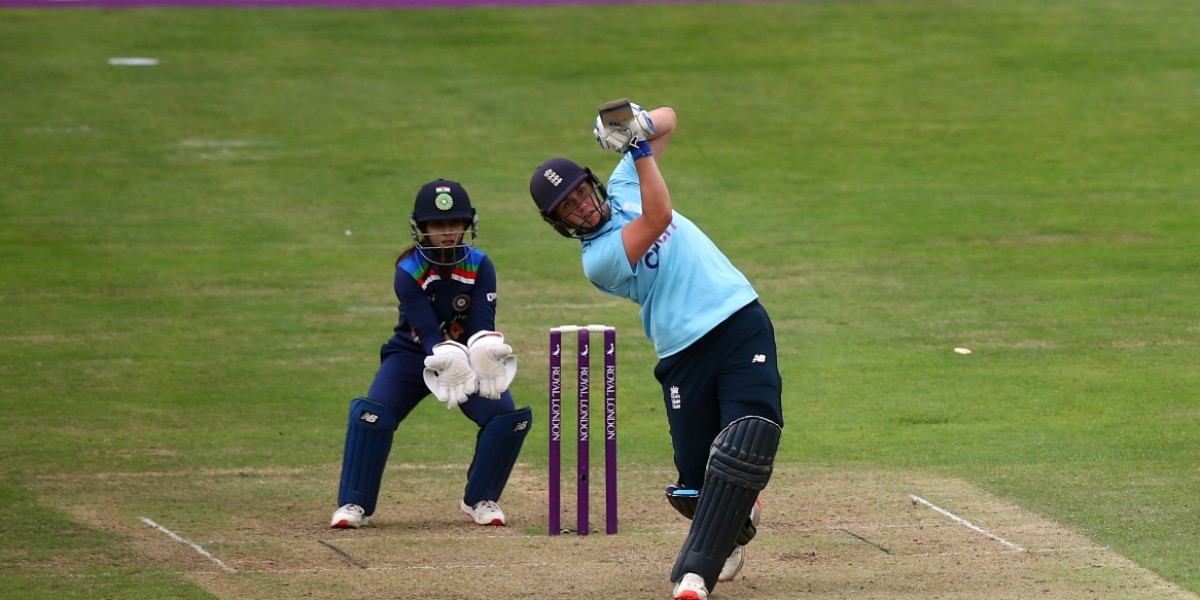 Skipper Mithali Raj's fighting half-century went in vain as England Women rode on Tammy Beaumont and Nat Sciver's aggressive unbeaten fifties to beat a below-par India Women by eight wickets in the first ODI of the three-match series on Sunday.

Mithali led from the front with a patient 72 to guide India Women to a modest 201 for eight after being put in to bat. She held India's innings together following two early dismissals. She shared two crucial partnerships -- 56 runs with Punam Raut (32) and 65 with Deepti Sharma (30) - to help India go past the 200-run mark.

But England Women cantered home with 91 balls to spare, thanks to opener Beaumont (87*off 87 balls) and Sciver's (74* off 74) unbroken 119-run third-wicket partnership that came off just 19 overs.England lost Lauren Windfield-Hill (16) early in their chase but Beaumont and skipper Heather Knight (18) shared 59 runs for the second wicket to get the hosts back on track. But Knight fell prey to a lovely delivery from left-arm spinner Ekta Bisht (1/55) that turned just enough after pitching to beat an onrushing England skipper's bat and disturb the timbers.

Sciver, however, did not let Bisht to settle down as she pulled and drove straight past the bowler for two boundaries in the spinner's next over. Beaumont continued her aggressive intent and brought up her fifty in 48 balls by sweeping Deepti Sharma to the square-leg boundary.

The Indians had a glorious chance to get back into the match but Bisht dropped Sciver at short fine-leg in the 20th over - Harmanpreet Kaur'sfirst in the innings.

The Indians lacked discipline in both fielding and bowling as pacer Shikha Pandey bowled two consecutive no balls in the 28th over, the second of which was clobbered by Sciver past mid-on to the boundary. From there on, it was a lost cause for the visitors as Beaumont and Sciver found boundaries at will to take England home with consummate ease, reaching 202 in 34.5 overs.

Earlier, India's start was far from impressive as the visitors lost both the openers cheaply. Teen sensation Shafali Verma's much-anticipated ODI debut lasted 14 balls from which she scored 15 runs with the help of three fours. Shafali, who became the youngest Indian cricketer to make debut across formats on Sunday, perished in search of too many big shots when she miscued a Katherine Brunt (2/35) delivery to Anya Shrubsole at mid-on in the fifth over. Smriti Mandhana (10) followed soon when Shrubsole (2/33) went through her defence before Punam and Mithali resurrected the innings.

After the early dismissals, both Punam and Mithali played cautiously but did not hesitate to punish the bad balls. When the partnership was just starting to flourish, Punam departed by handing a simple catch to Sophie Ecclestone off Kate Cross. India's vice-captain Harmanpreet Kaur's (1) poor form continued as she didn't trouble the scorers much, sneaking one to Amy Jones off Ecclestone (3/40).

It was a struggle for the experienced campaigner Mithali early on. She found boundaries hard to come by, notching up her fifty in 95 balls with a four off Shrubsole. Together with Deepti, Mithali added 65 runs for the fifth wicket before the former was dismissed, LBW to Shrubsole. But soon after Deepti's dismissal, Mithali changed gears and hit three boundaries in an over, slicing and lofting Shrubsole to amass 15 runs off the 44th over.

Just when Mithali was looking dangerous, Ecclestone got rid of her in the 46th over as India slumped to 180 for 6. Shikha Pandey (3) and Jhulan Goswami (1) remained unbeaten to help India get past the 200-run mark.