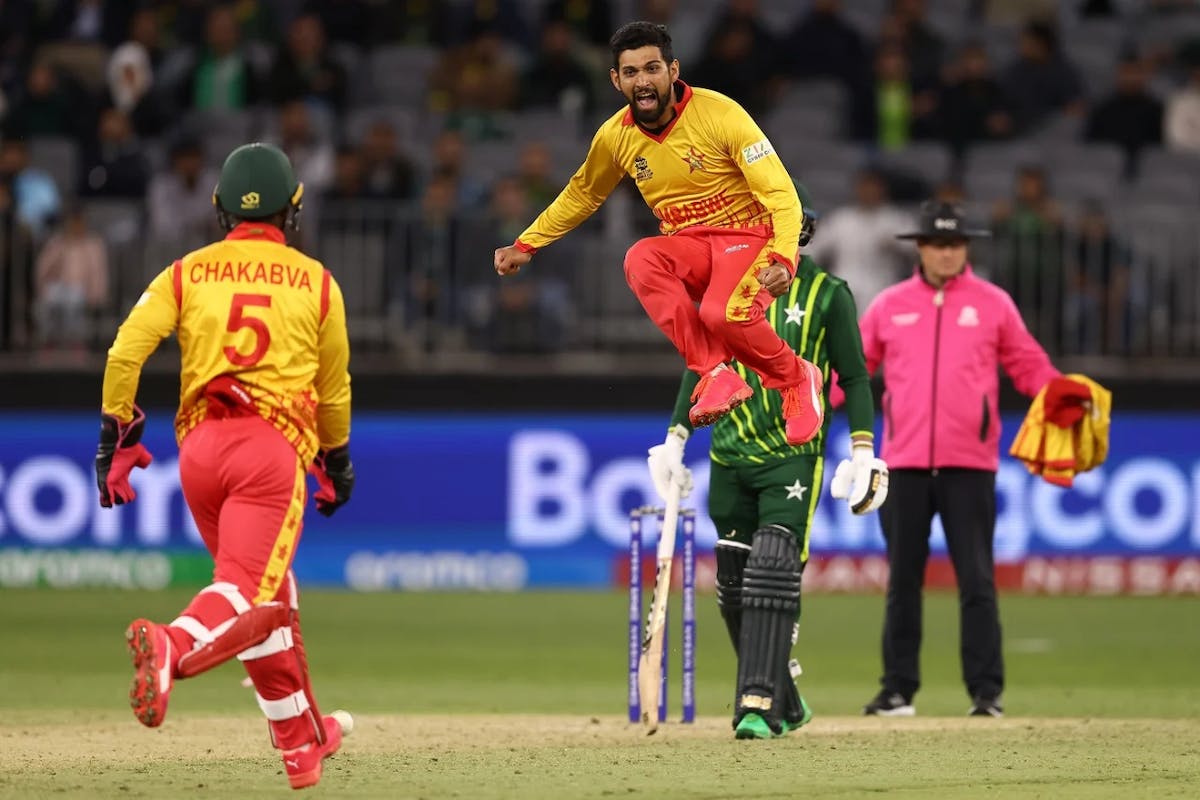 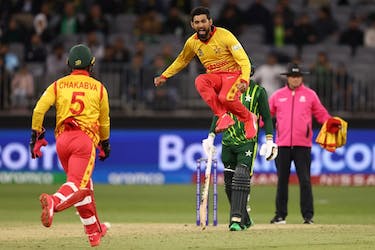 With that famous win against Pakistan, Ervine and his men now find themselves in a position from where they can actually think of qualifying for the semis

“Here’s Evans. It’s gonna be one. Will it be two? It won’t be. Because… Oh, he finally grabbed it. And, man! Man, oh man, heart-stopping stuff I tell you! But what a victory for Zimbabwe! They were gone, probably dead and half buried at the halfway stage with just a 130 on the board. But somehow, somehow with those tall bowlers, with the bounce here in Perth, with Raza in the middle with three (wickets), they have fought and fought and finally managed to get home. What a win by just one run!”

Pommie Mbangwa was at his absolute best when Zimbabwe pulled off a stunning one-run victory over Pakistan in Perth. The 46-year-old never stopped believing, and what those 11 men in red and yellow achieved on Thursday will be etched in the history books of Zimbabwe cricket. With that famous win, Craig Ervine and his men now find themselves in a position from where they can actually think of qualifying for the semi-finals. It’s still a long shot but we have already seen some crazy outcomes in this tournament.

Mind you, Zimbabwe are still unbeaten in the Super 12 stage. Now, what if they beat both Bangladesh and the Netherlands? What if their game against India in Melbourne gets washed out? Or, what if they cause yet another upset? What if Pakistan defeat South Africa or the match gets rained out? Yes, we are getting far too ahead, but Zimbabwe now have a serious chance of making it through to the next stage. They also have the advantage of controlling their own narrative and will now shift their focus to Bangladesh.

The last time these two sides were involved in a T20I series, Zimbabwe defeated Bangladesh 2-1. The latter have a horrible record in this format, having won only five of their 21 T20Is since the last World Cup. Shakib Al Hasan and Co. started their campaign with a nervy nine-run win over the Netherlands but were clobbered by 104 runs against South Africa on the very same day Zimbabwe created history. Bangladesh have the worst win percentage (25) amongst teams from the Super 12 stage and you would expect in-form Zimbabwe to emerge victorious at the Gabba on Sunday (October 30).

Raza is brilliant, but will need some support

Zimbabwe without Sikandar Raza is like Conor McGregor without his left hook. You take that left hook out of McGregor’s armoury, the Irishman becomes an average fighter. Similarly, you remove Raza from the Zimbabwe team and they become a very mediocre unit. It’s difficult to think of a team who relies so much on one individual. 145 runs in five innings at an average of 29 and a strike rate of 149.48 and eight wickets at an average of 12.12 and an economy 6.06 - Raza almost single-handedly carried Zimbabwe to the Super 12 stage and has contributed to every single win.

The right-handed batter got scores of 82 and 40 in the First Round against Ireland and Scotland respectively. He didn’t fire with the bat against West Indies but managed to claim three wickets. He didn’t have a great game against South Africa but that match was washed out. Against Pakistan, Raza got out for just 9 but scalped three big wickets in the middle overs to reduce Pakistan from 88/3 to 94/6 in the space of four deliveries. Not to forget, it was Raza who sent in that fiery throw from long-on to run out Shaheen Shah Afridi on the last delivery of the match.

He has been putting up such performances for a while now. In 2022, the 36-year-old has slammed 661 runs in 20 innings at a strike rate of 151.6. Only Suryakumar Yadav and Mohammad Rizwan have scored more runs than him this year. If that wasn’t enough, he has also claimed 23 wickets at an impressive strike rate of 16.7. "Raza is 36 years of age, but he's playing with a more youthful exuberance. Now it looks like he's, you know, 26 again, he's running around in the field and enjoying himself and leading from the front,” former Australia skipper Ricky Ponting told ICC.

Zimbabwe would want him to contribute in every game but that’s not really possible. The other batters will have to come good if they are to enter the semis race. Apart from Raza, Wesley Madhevere is the only other Zimbabwe batter who averages more than 25 (26.35) and has a decent strike rate (129.1). The likes of Ervine and Sean Williams haven’t done much in this competition and Zimbabwe would want these two senior pros to step up. Milton Shumba has only managed 55 runs in five innings and Zimbabwe have the option of replacing him with either Clive Madande or Tony Munyonga.

It’s no hidden secret that Bangladesh have been terrible in the batting department and could once again struggle against Zimbabwe’s tall fast bowlers - Richard Ngarava and Blessing Muzarabani - at the Gabba. Brisbane hasn’t hosted a single game so far in this tournament, so the surface will be new and should offer good pace and bounce to the fast bowlers.

Both Ngarava and Muzarabani are known for bowling those heavy-length deliveries and that’s exactly what troubled Pakistan batters. And, it won’t come as a surprise if they use a similar ploy against Bangladesh.

Amongst teams from the Super 12 stage, Bangladesh have the second-worst scoring rate (7.4), average (20.9) and balls per boundary (7.9) in T20Is since the last edition of the World Cup.

Bangladesh could only manage 144/8 against the Netherlands but Taskin Ahmed and Co. saved them from embarrassment. Against the Proteas, they were bundled out for 101 in 16.3 overs. Bangladesh do have a decent bowling line-up but it will be of no use if their batters continue to disappoint.