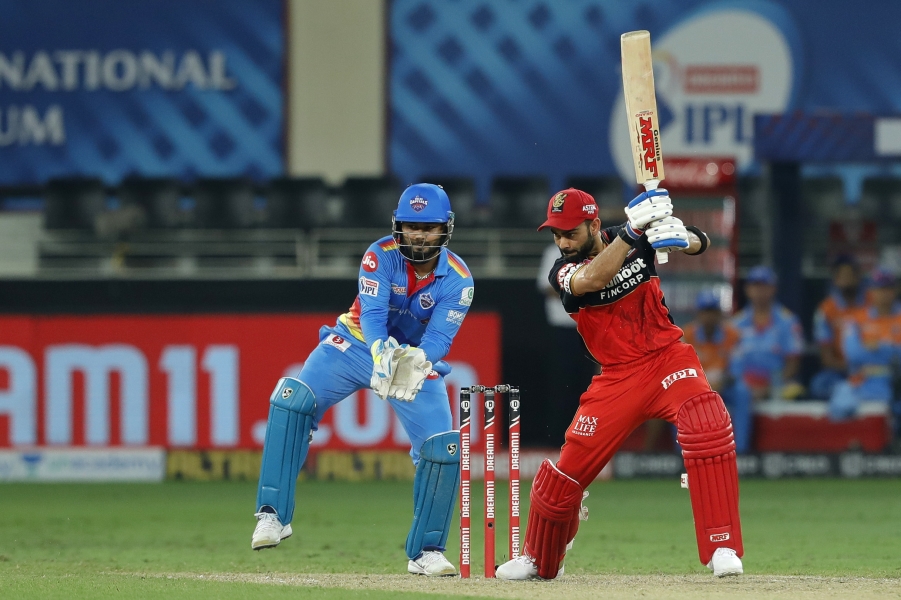 Cricket.com Staff
Delhi Capitals vs Royal Challengers Bangalore, IPL 2020, Match 55: Fantasy Preview
Here are a few tips and suggestions that might help you in creating your fantasy team for the 55th match of IPL 2020 between DC and RCB at Abu Dhabi

The equation is simple as far as Delhi Capitals and Royal Challengers Bangalore are concerned. You win, you go through and guarantee yourself a second spot on the points table, you lose and you are at the mercy of other results for a place in the playoffs.

Life has become extremely tough for both RCB and DC, who at one point would have thought they are all but through to the final four. However, a string of losses – 3 on the trot for RCB and 4 for DC – means both teams have lost momentum. In some ways, Match 55 of IPL 2020 will be a battle of equals.

Historically, RCB have had the wood over DC in the IPL. The two sides have played each other 24 times with RCB winning 14 games to DC’s 9. In the last 5 matches though DC have a 3-2 lead.

When these two sides met earlier in the tournament, it was DC who took the game by 59 runs. 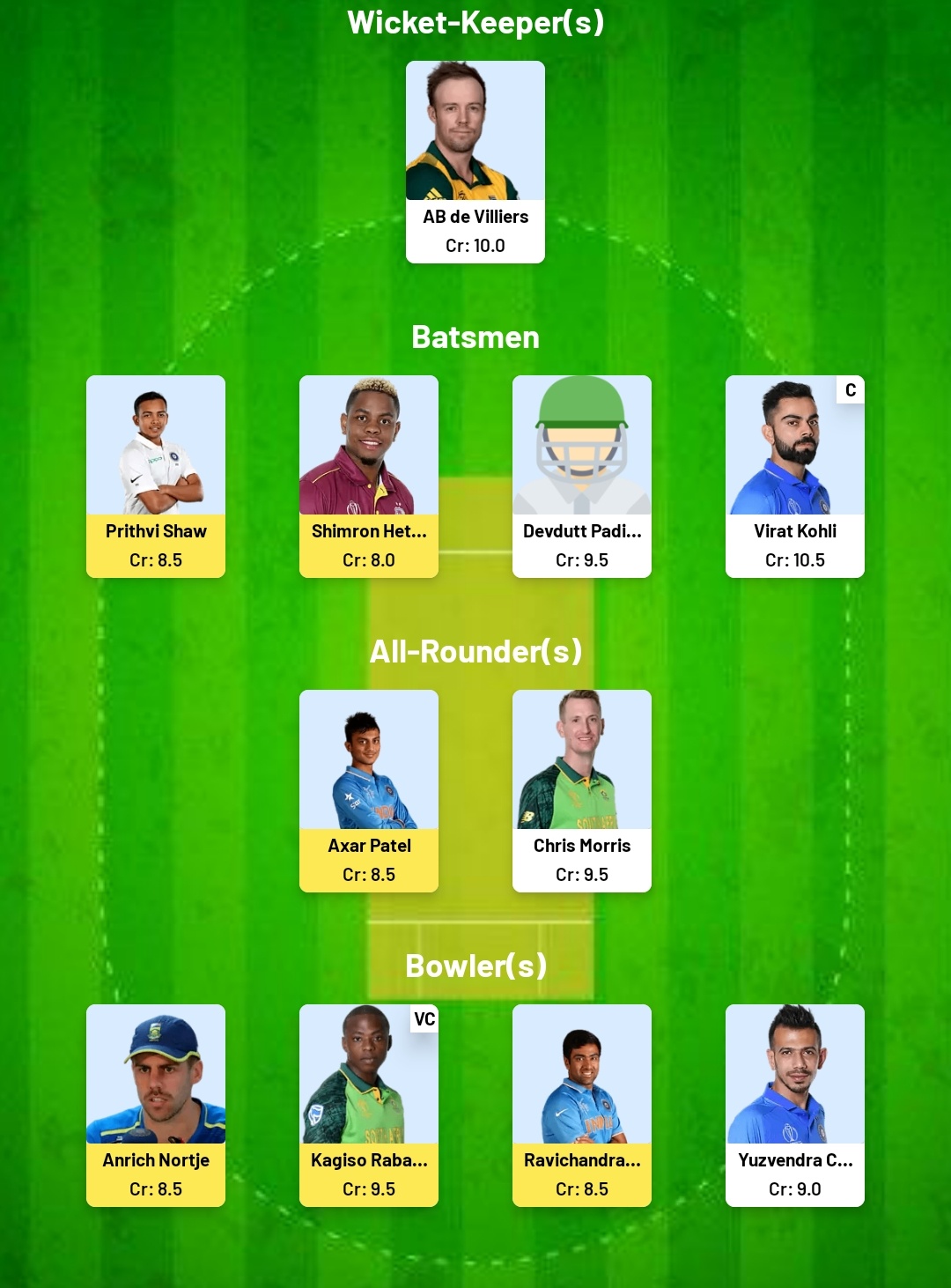 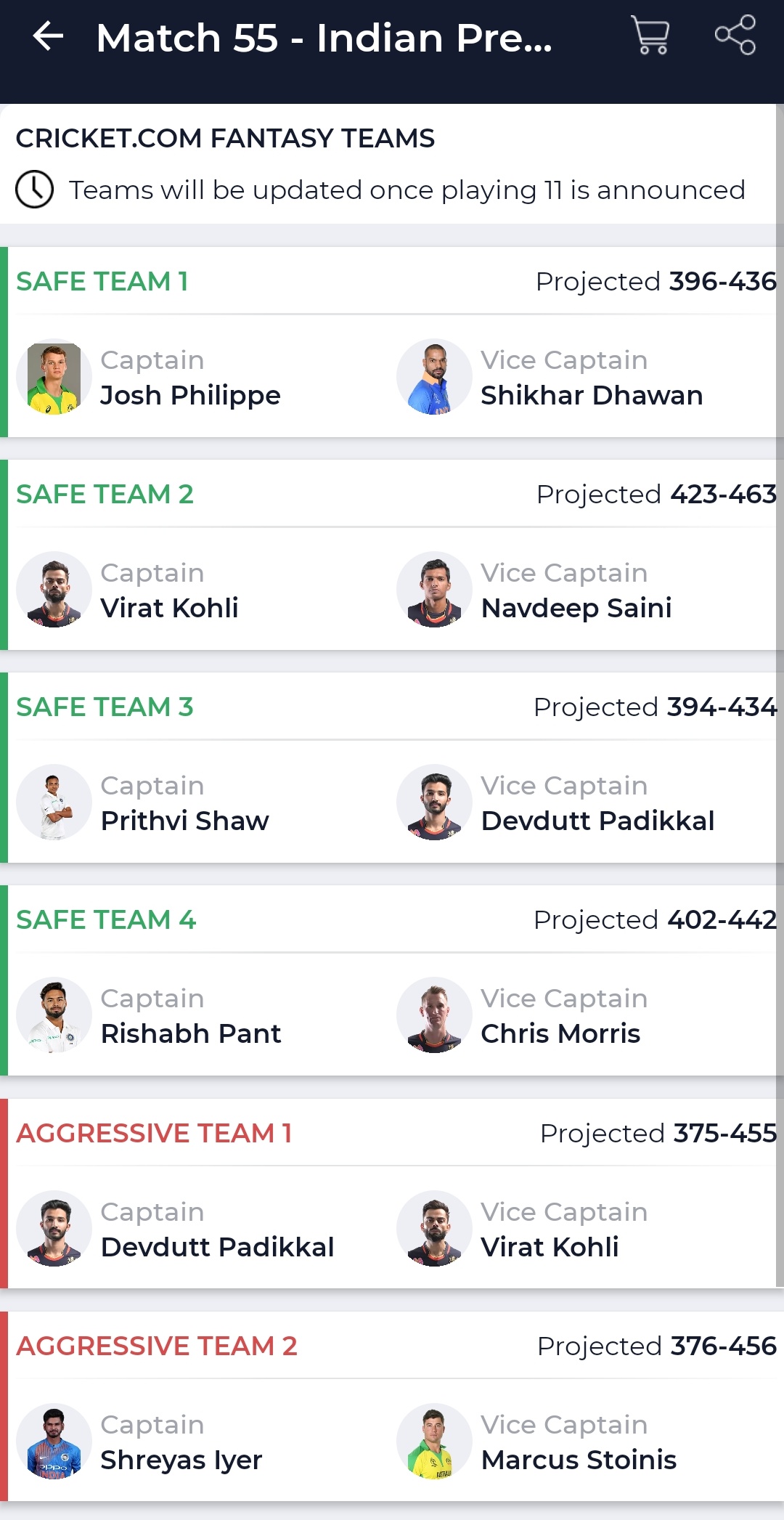 Out of the three venues where the IPL is being played, the Sheikh Zayed Stadium, in Abu Dhabi is one in which there has been something for both batsmen and bowlers. The pace bowlers have gotten swing early in the innings while the batsmen courtesy the true nature of the surface have been able to strike well.

Batsmen have scored at an average of 30.3 runs per wicket here, which is behind Sharjah but in front of Dubai while the bowlers have picked up a wicket once every 22.3 deliveries. You should ideally go for a heavy fantasy side which covers both batsmen and bowlers in equal measure. Having said that the surface at Abu Dhabi has felt like slowing up in the last few games so you should also keep a few slower bowlers in the side.

The fast bowlers have easily been better than their spin bowling counterparts at the venue this season. They have picked 126 of the 186 wickets to fall here, 67.7% percent of the wickets, at a strike rate of 22.1. The spinners, on the other hand, have picked a wicket every 27.2 deliveries. 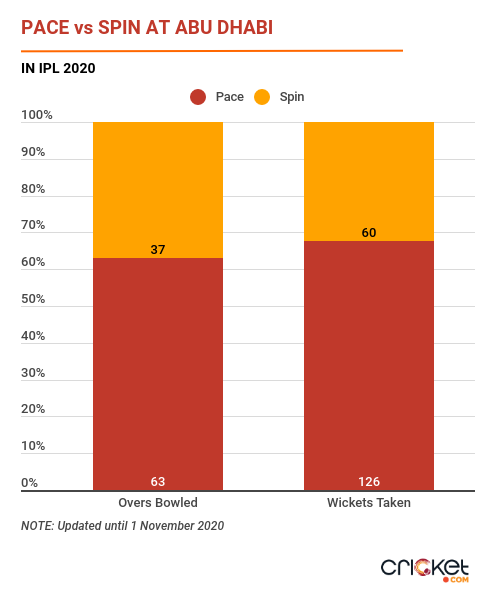 Among the batsmen, you are truly spoilt for choice. There is Virat Kohli, Shreyas Iyer, Shikhar Dhawan and AB de Villiers. You should certainly pick at least 3 out of these 4 batsmen in your side.

A combination of five frontline batsmen including the wicket-keeper, two all-rounders and four bowlers could be the way to go for this encounter.

AB de Villiers is undoubtedly one of the biggest names in T20 cricket but he has struggled big time against R Ashwin. In 16 innings Ashwin has dismissed de Villiers 5 times. The South African averages just 17.6 against Ashwin at a strike rate of 102.33. 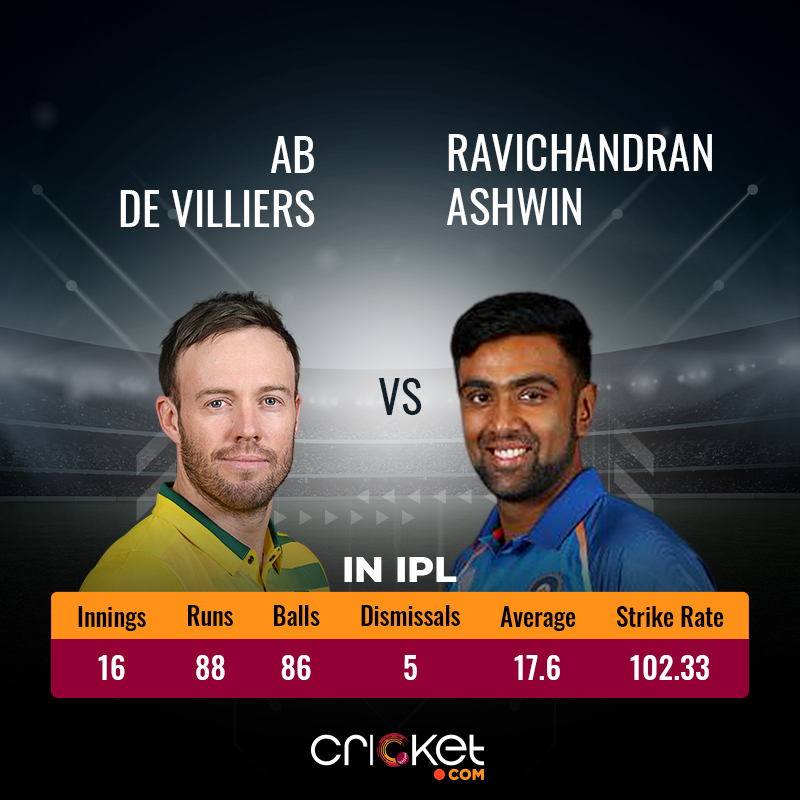 De Villiers should try and give the strike to Virat Kohli in case Ashwin comes to bowl when the duo is in the middle. Kohli has a terrific record against Ashwin. In 19 innings, the RCB has scored 159 runs against Ashwin and is yet to be dismissed. 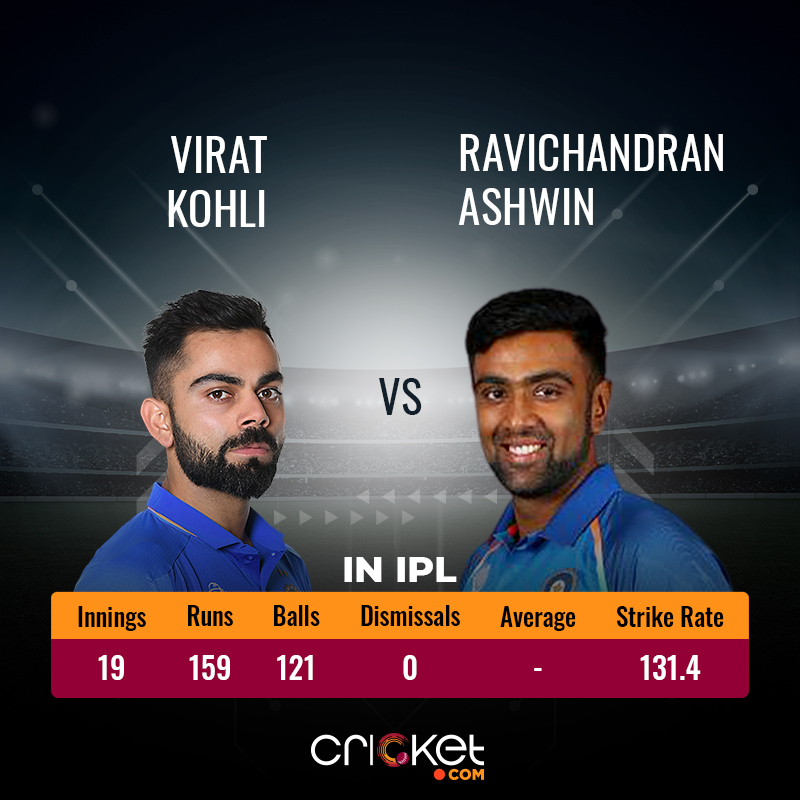 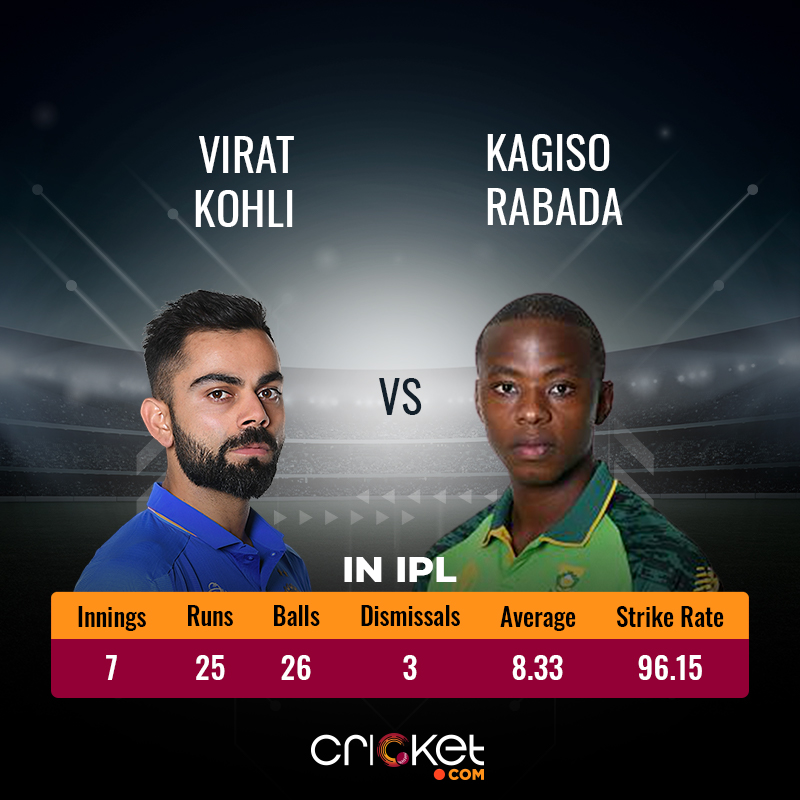 Virat Kohli has always brought out his 'A' game against his home state and in a crunch game, with a playoffs spot on the line, one can expect the RCB captain to come out firing on all cylinders once again. No other batsman has scored more runs than Kohli in the IPL against Delhi – 868 runs in 21 innings at an average of 62 which includes 8 fifties and a highest score of 99. Kohli is RCB’s highest run-scorer so far in the competition and he can be expected to come good against Delhi. 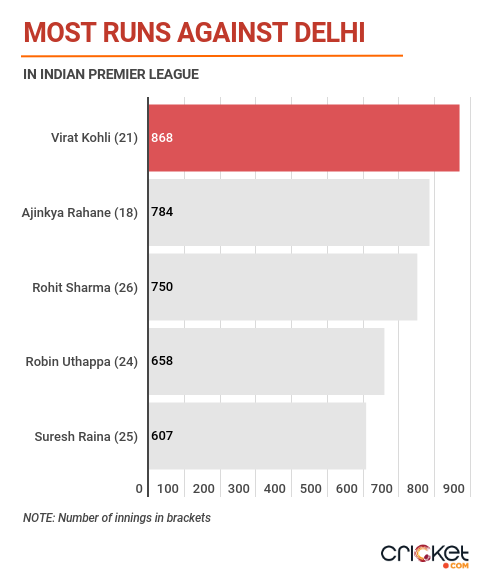 Yuzvendra Chahal has time and time again turned the tide in RCB’s favour this season. He has not been afraid to toss the ball up and the results are showing. Chahal is RCB’s leading wicket-taker so far this season with 20 scalps in 13 games striking every 15.3 deliveries. On a surface where leg-spinners have done relatively well, Chahal will be keen on coming good. 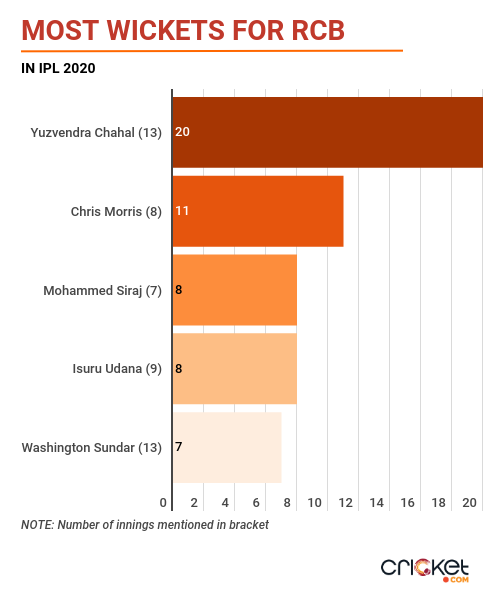 Kagiso Rabada has not been at his best in the last two games and that has seen the Purple Cap slip off his head but in a crunch game, he is expected to up his game. Rabada loves a challenge and against the likes of AB de Villiers and Virat Kohli, he will get one. In the fixture earlier in the tournament, Rabada had broken RCB’s back picking 4/24 in his four overs and he will want to do something similar here. Not just to help Delhi win but to also win back the Purple Cap.

R Ashwin has not been at his best so far this tournament but against a team he has done well in the past, the off-spinner will be hopeful of getting back into the wickets. Ashwin is a big game player and considering his record against the likes of de Villiers, one could expect him to fetch crucial points.