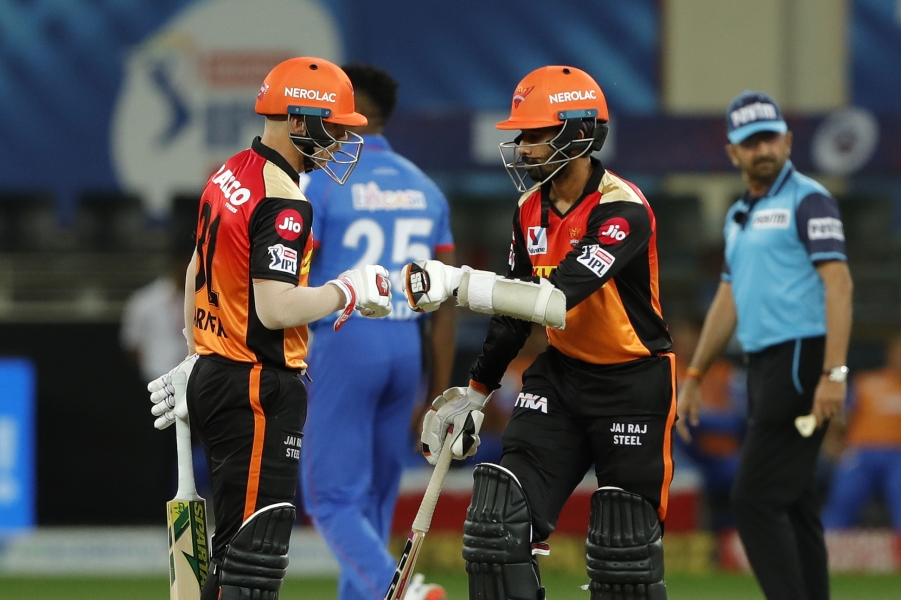 Mumbai Indians (MI) have been the best team in the 2020 Indian Premier League (IPL) and, therefore, it’s no surprise to see them already in the final. Qualifier 2 between Delhi Capitals (DC) and Sunrisers Hyderabad (SRH), will decide which side will face Mumbai in the title clash.

Going into this game, SRH will be the more confident of the two teams as they are on a four-match winning streak. On the other hand, DC have lost five out of their last six matches, most recently Qualifier 1 against MI.

Both matches between DC and SRH during the 2020 IPL league stage were won by the latter. 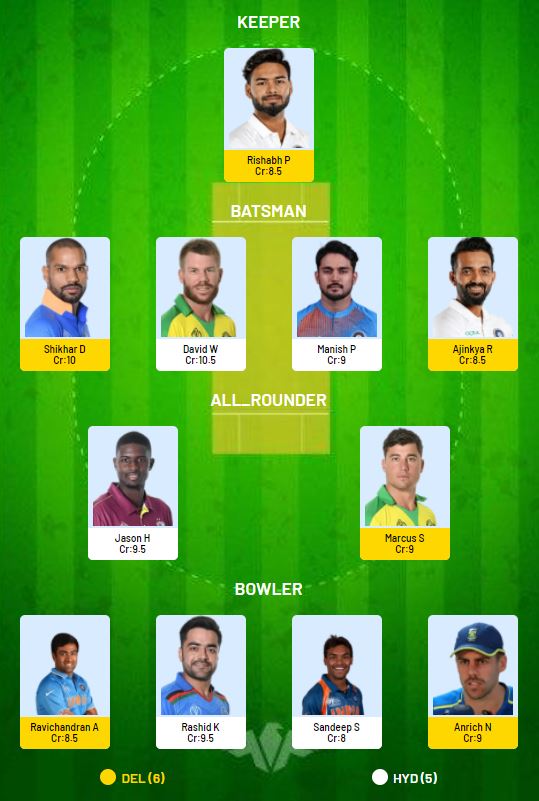 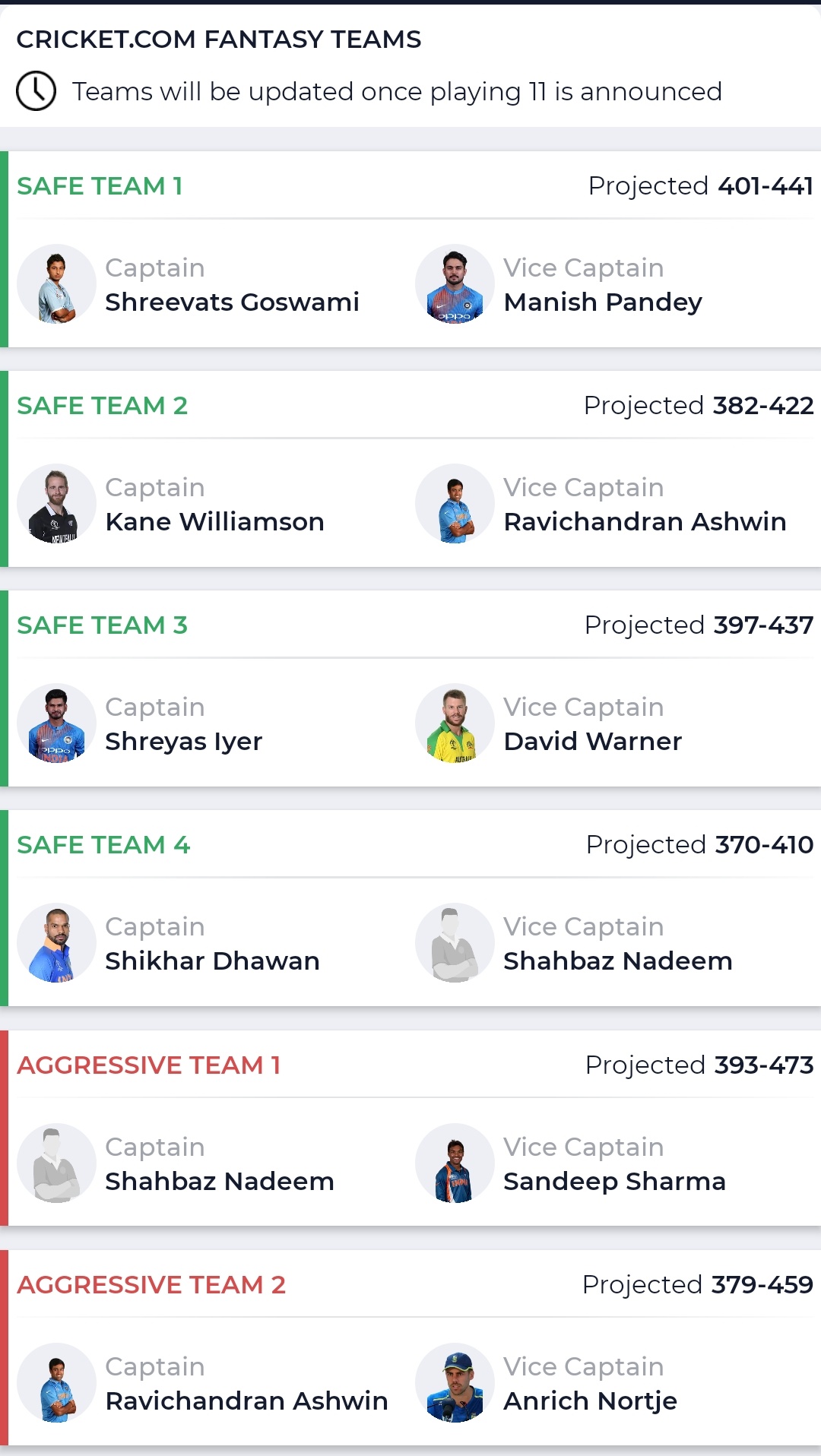 This will be the 22nd match of the season at the Sheikh Zayed Stadium in Abu Dhabi. In 21 games, teams batting second have won 13 matches. The toss is likely to be very crucial as the last six contests here have been won by the sides chasing.

The rate of scoring runs has been the lowest in Abu Dhabi (8.1 runs per over) among the three venues where matches have been held this season. The batting average here (29.8) has been higher than Dubai (27.3) but lower than Sharjah (31.3).

While bowlers have been economical, wickets haven’t fallen as regularly in Abu Dhabi (22.2) compared to Dubai (20) and Sharjah (21.1). 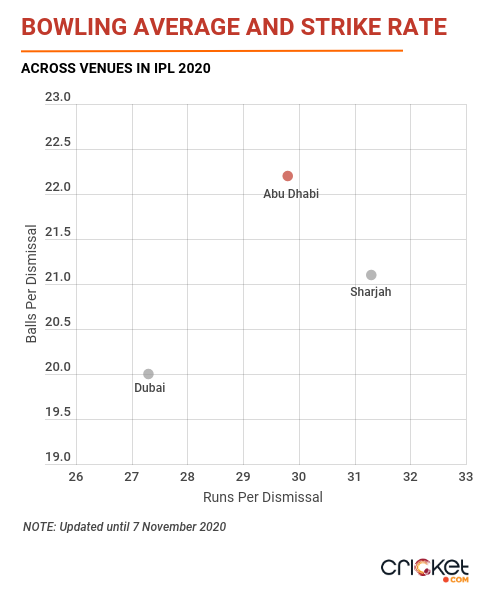 In the 21 matches in Abu Dhabi this season, pacers have taken 139 wickets while spinners have accounted for 67 dismissals. While the faster bowlers have bowled 61.8% of the deliveries, they have taken 67.5% of the wickets which is a sign that they are likelier to take more wickets.

Spinners (7.2) have been more economical than pacers (8.4), but in fantasy cricket, wickets count for much more than a good economy rate. Hence, it would be wise for you to pick more fast bowlers as they have a better bowling strike rate by 6.2 when compared to the slower bowlers in Abu Dhabi this season.

In our team, we have gone with three frontline pacers along with Marcus Stoinis who might also bowl.

With Wriddhiman Saha being an injury doubt, we have selected Rishabh Pant as our wicketkeeper. But if Saha is fit, he seems to be the better option because of his excellent recent form. 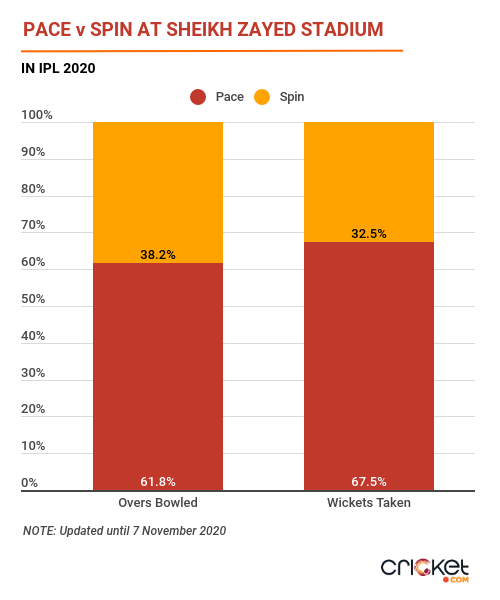 There are a few interesting match-ups as well

Ravichandran Ashwin against any left-handed batsman is always a contest to watch out for. Against David Warner as well, he has a good record. In fact, both have been good in their own departments. Warner has scored over 150 runs at an average of 31.2 and Ashwin has bagged him five times in 14 innings. 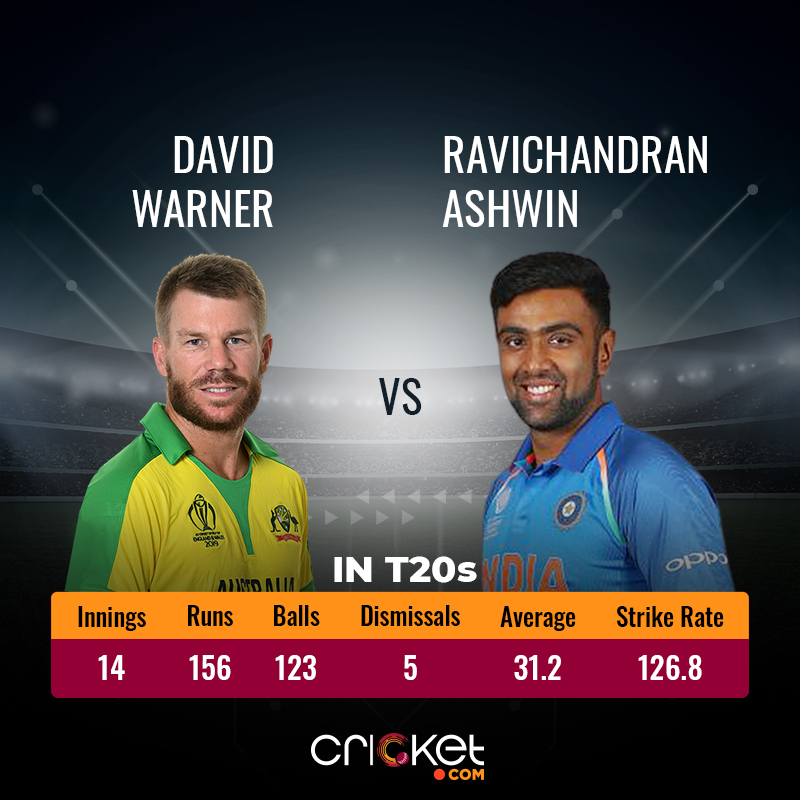 Manish Pandey is one of those batsmen who is good against the spinners. However, his strike rate is always around the lower side. When facing Ashwin as well, that has been the case. In 13 innings he has an average of 38 against him but has scored at only 111. 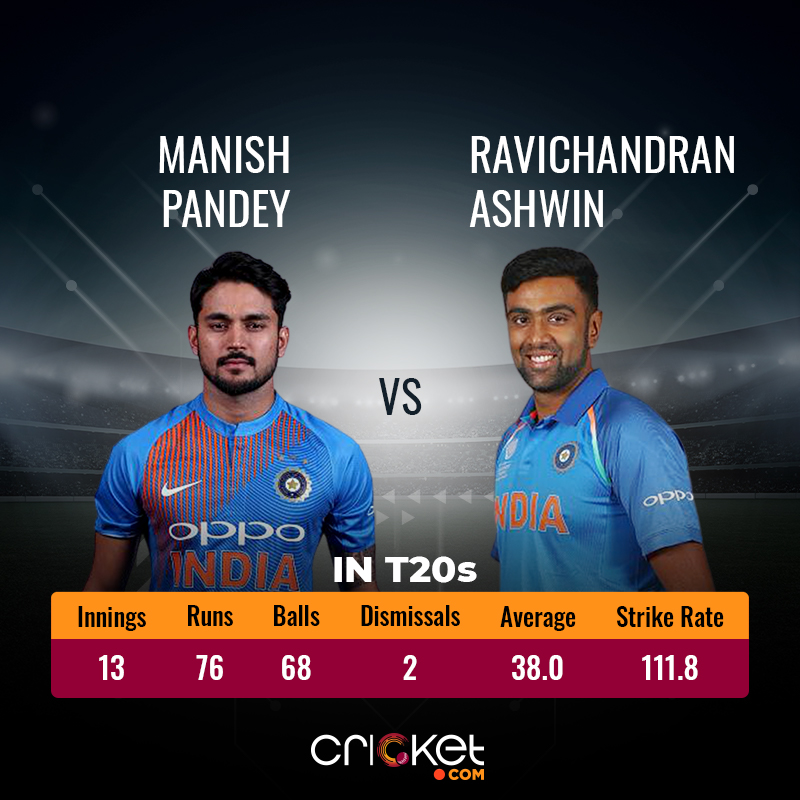 Shikhar Dhawan has blown hot and cold this season. But, when facing Rashid Khan in T20s, everything has gone south for the Delhi opener. In the two innings he has faced against the foxy Rashid, he has got out once and has scored at a strike rate of 66.7. 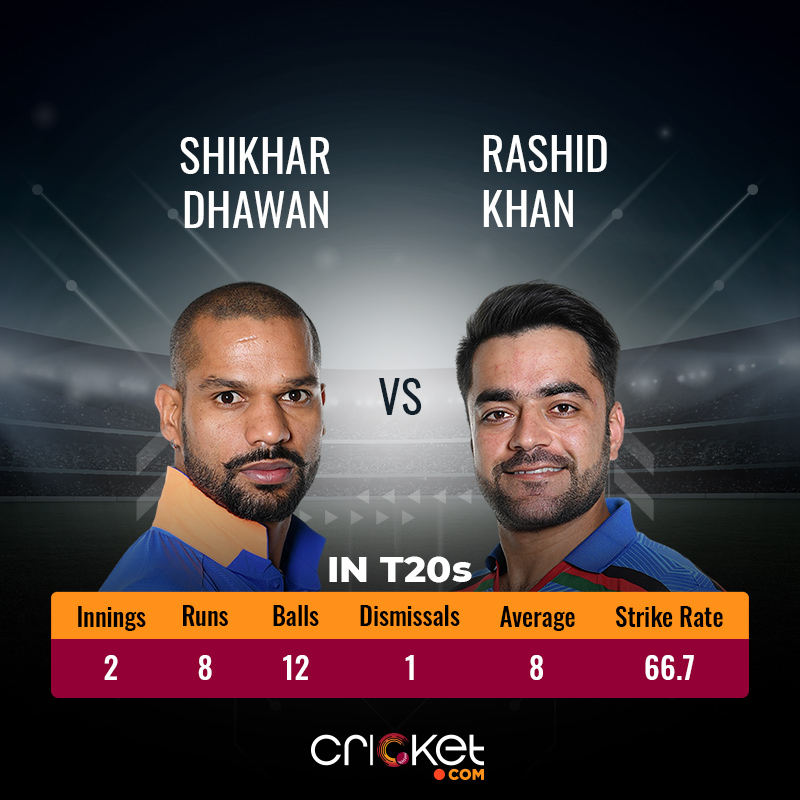 DAVID WARNER: The Sunrisers skipper has been his usual self in the last few matches. In his first 10 matches Warner was batting slower, but was amongst the runs. In the last five matches, he has been aggressive in his approach. He has scored 211 runs at an average of 52.7 and a strike rate of 157.5.

In yet another season, the Goliath of IPL has scored 500 runs. His sixth time registering 500+ runs in a season of IPL and all of those six have been in succession. In IPL 2020, Warner with 546 runs is the second-highest run-scorer.

Our Criclytics player projection predicts, Warner could score 16-39 runs in Qualifier-2 against Delhi. 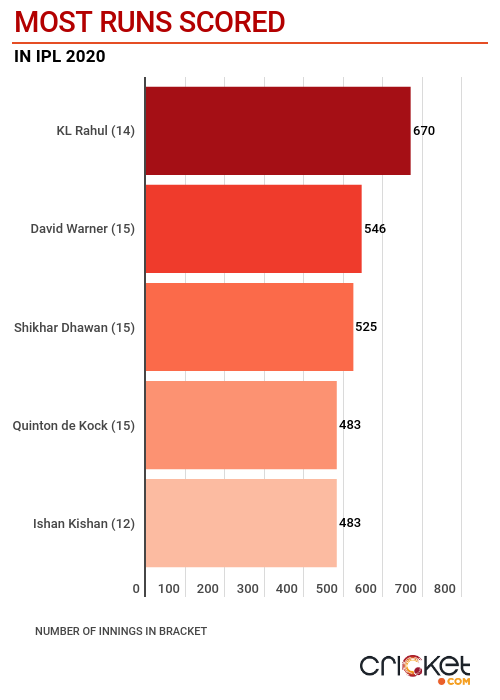 RASHID KHAN: The season keeps getting better and better for the magician. In the 2020 edition of IPL, Rashid Khan has bagged 19 wickets. His second-best in a season of IPL, only in 2018, Rashid had bagged 21 wickets. This season, his 19 wickets is the most for a Sunrisers bowlers and amongst spinners, only Yuzvendra Chahal is ahead of Rashid with 21 wickets.

As always, Rashid’s specialty has been his ability to cut off the run-flow. In this season, he has conceded at an economy of 5.3. Among bowlers with 20+ overs this season, he is the only bowler to concede less than 6 per over.

Our Criclytics player projection predicts, Rashid could pick 1-2 wickets in Qualifier-2 against Delhi.

SANDEEP SHARMA: The absence of Bhuvneshwar Kumar doesn’t seem to have hampered Sunrisers' bowling. During the death overs, T Natarajan has clasped the responsibility and at the start in the Powerplay, it has been Sandeep Sharma. Against Mumbai in the league stages, he became the highest wicket-taker inside the Powerplay – all-time IPL – with 53 wickets. This season, he has nine wickets inside the Powerplay which is the third-highest for a bowler.

Our Criclytics player projection predicts, Sandeep could pick 1-2 wickets in Qualifier-2 against Delhi.

ANRICH NORTJE: Throughout this season, Anrich Nortje and Kagiso Rabada have been lethal bowlers for Delhi. However, Rabada has faded a bit, but Nortje still is going strong. The quick South African has picked up 20 wickets this season at an economy of 8.3. In terms of fantasy points, Nortje has 573 points to his name. Certainly, an X-factor to watch out for against the Sunrisers.

Our Criclytics player projection predicts, Nortje could pick 1-2 wickets in Qualifier-2 against Sunrisers.