Dhawan – oldest to captaincy debut, Kishan – first to score a debut 50 on his birthday 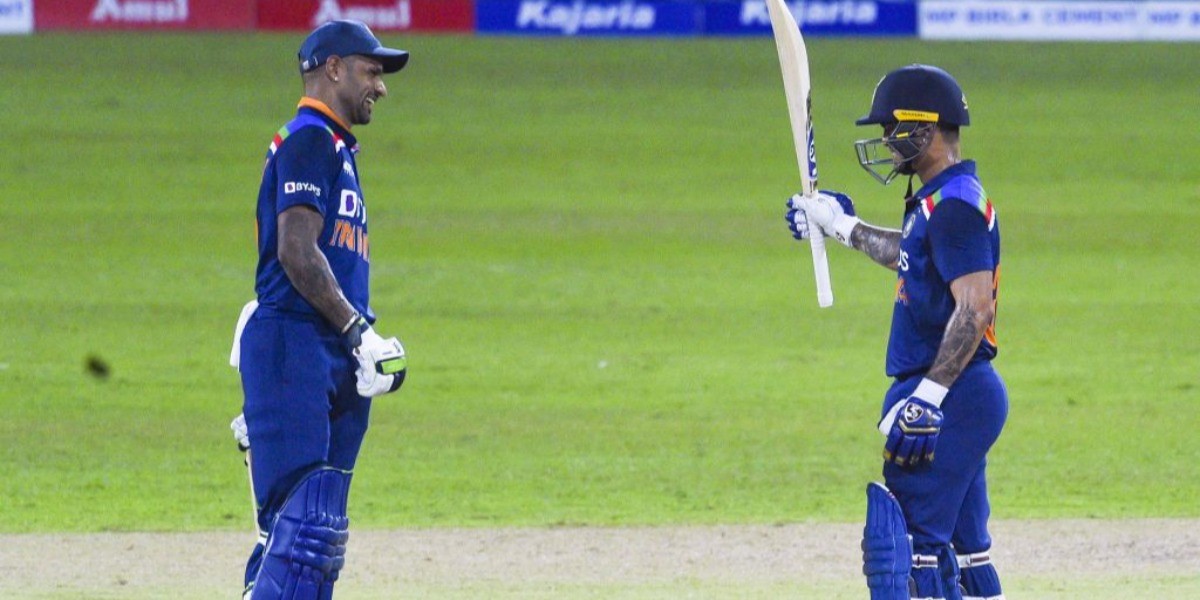 Dhawan – oldest to captaincy debut, Kishan – first to score a debut 50 on his birthday

Here are a few noteworthy stats from the first ODI between India and Sri Lanka at R Premadasa Stadium, Colombo

A new look and an opportunistic Indian side are off to a grand start in the first ODI. The series was pushed forward after pandemic concerns. A five days delayed start didn’t hamper the entertainment. Sri Lanka put on 262 runs in the first innings after they chose to bat first. None of their batsmen registered a big score after getting starts.

As for India, a blazing start from Prithvi Shaw, a blistering fifty on debut for Ishan Kishan and an anchoring innings from Shikhar Dhawan saw India through with 13 overs still to spare. There were lots of records broken or set, here are a few notable ones: 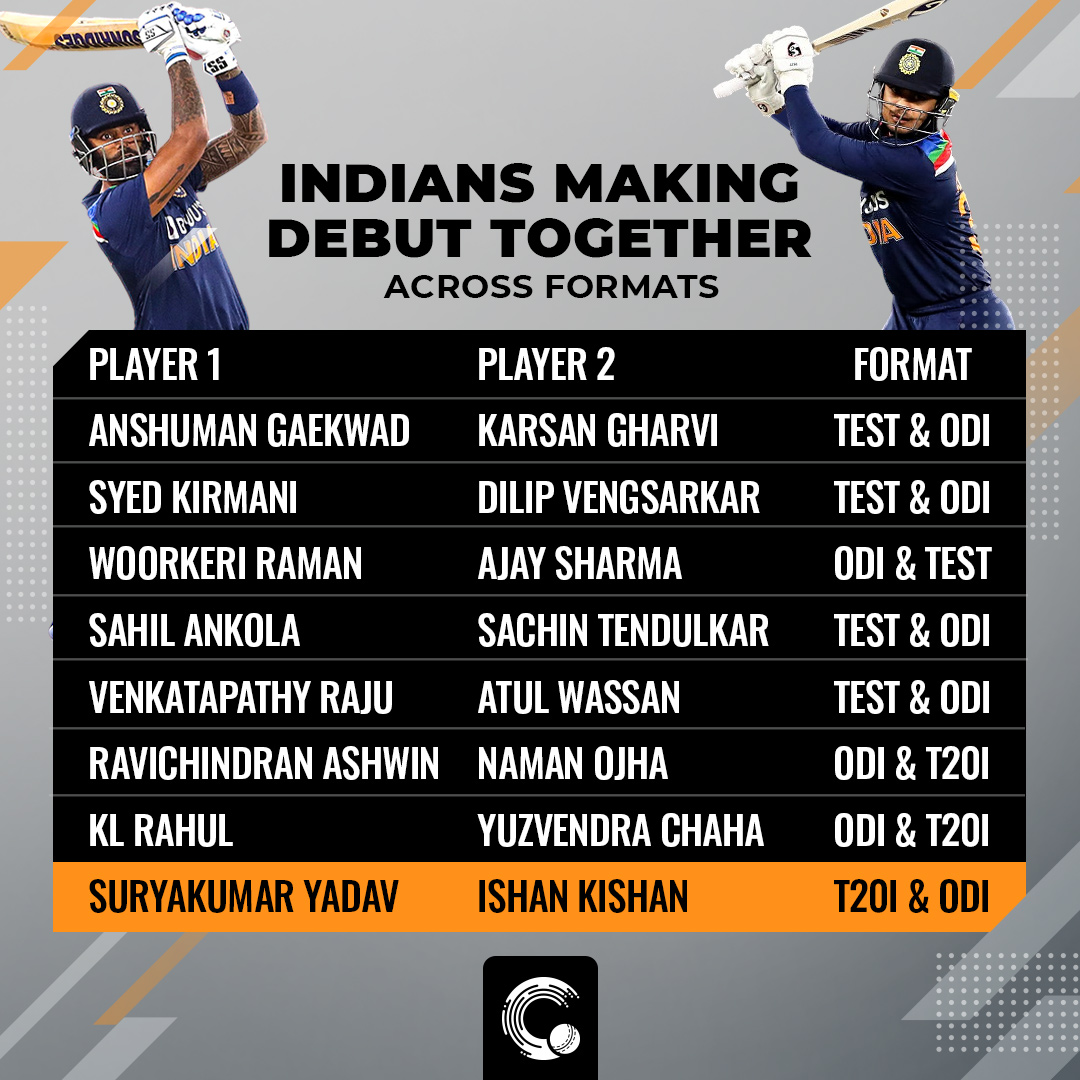 Suryakumar Yadav and Kishan and share a special bonding, let be in IPL for Mumbai Indians or while playing for India. Both the players made their international T20 debut together against England earlier in 2021. In the first ODI, they were again together making their debut in this format. They were the eighth Indian pair to debut together in two different formats. The first pair was Anshuman Gaekwad and Karsan Ghravi.

Kishan got one of his best 23rd birthday gifts when he received his maiden ODI cap. He became the 16th overall and second Indian to make their ODI debuts on their birthday. Gurusharan Singh in 1990 against Australia in Hamilton was the first Indian. His birthday turned out to be much more delightful when he became the first ever player in ODI to register a half-century while debuting on his birthday. He got off the mark in a grand style by smashing a six of the first ball. Since 2001, he is the only person to achieve this in ODIs. 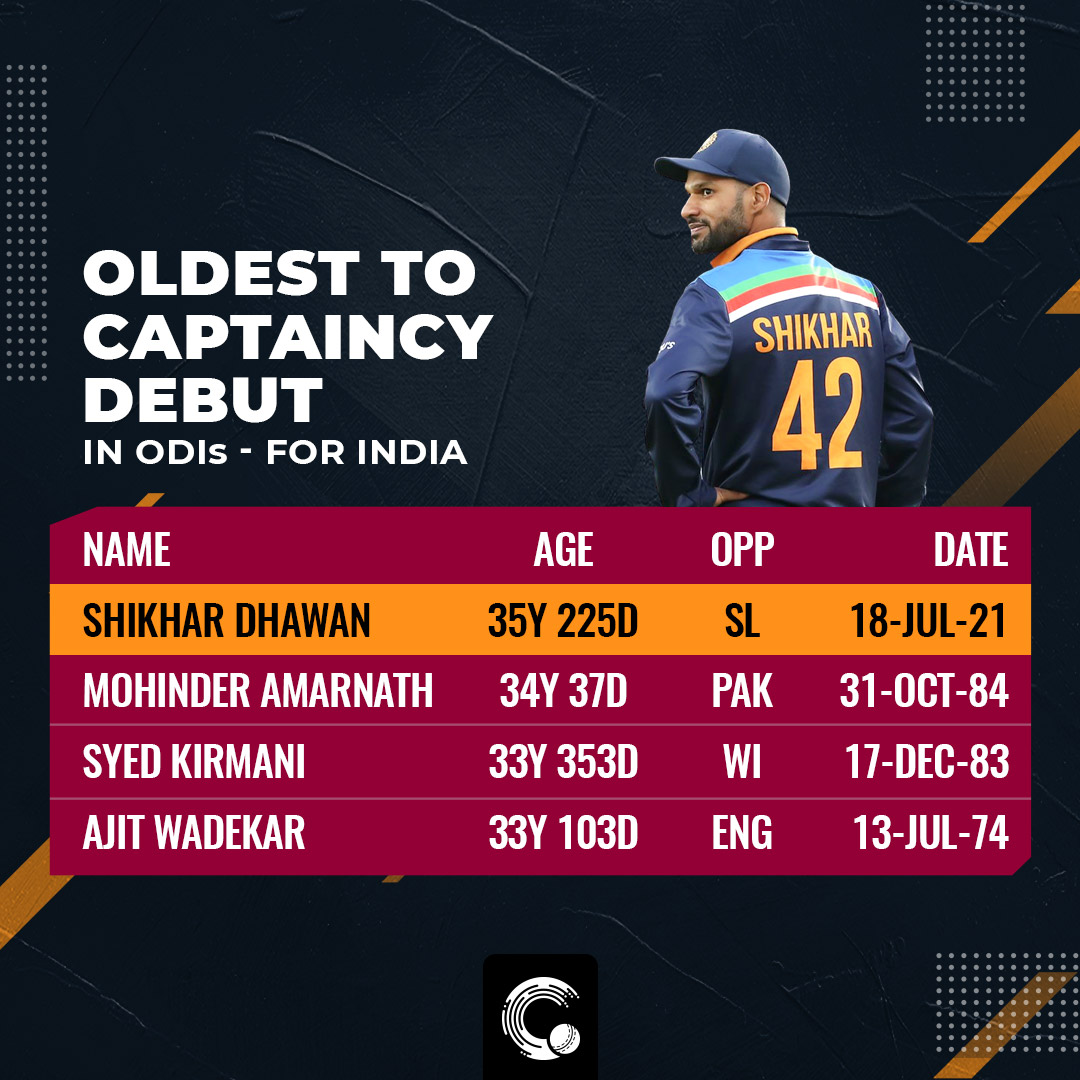 Dhawan became the 25th Indian captain to lead the side in ODIs. He was aged 35 years and 225 days when he stepped out for the toss. No other Indian has made their captaincy as late as Dhawan in this format. Previously, Mohinder Amarnath against Pakistan made his captaincy debut in 1984 at the age of 34 years and 37 days.

Not converting the starts 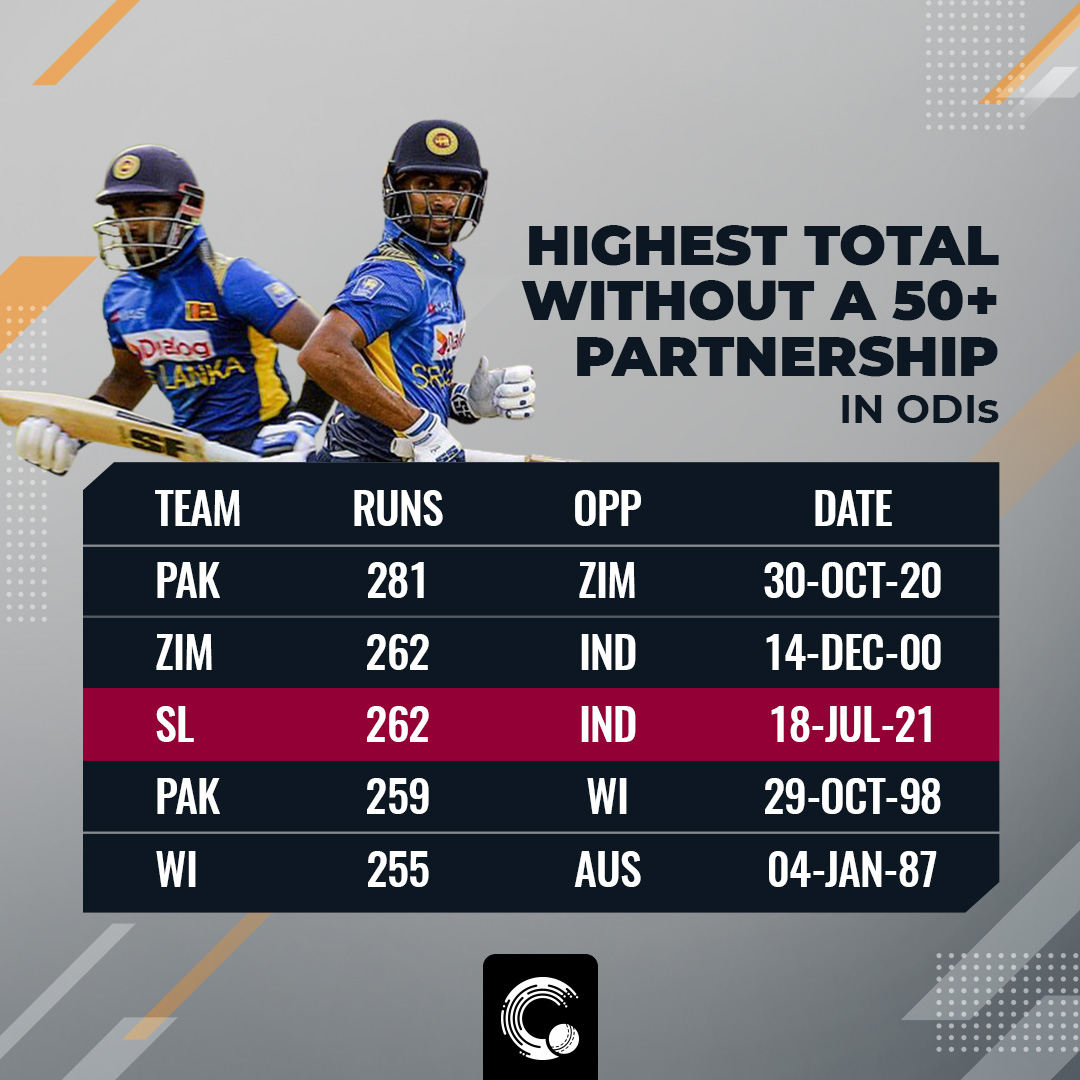 Sri Lanka got off to a great start when their opener provided a 49-run partnership. There were partnerships of 36, 28, 49, 20, 19, 17 and 40*. But, none of those were converted into big ones, which was the major problem in Sri Lanka’s innings. The 262 runs they scored without a 50+ partnership is the joint second highest score in ODIs. Zimbabwe against India in 2000 also had posted 262 runs. But, Pakistan against Zimbabwe in 2020 had posted 283, which is the highest score for a team without a 50+ partnership.

In pursuit of 263 runs, India were off to a dazzling start after Prithvi Shaw went berserk in the first five overs and later on Kishan carried it forward. Hence, giving India a solid head start in the first 10 overs. India scored 91 runs in the first 10 overs, which is the second most runs they have scored in this phase in the last decade. In 2012 against the same opponents, India had scored 97 runs at Bellerive Oval, the most since 2011.

Dhawan – Quickest to 1000 runs against SL 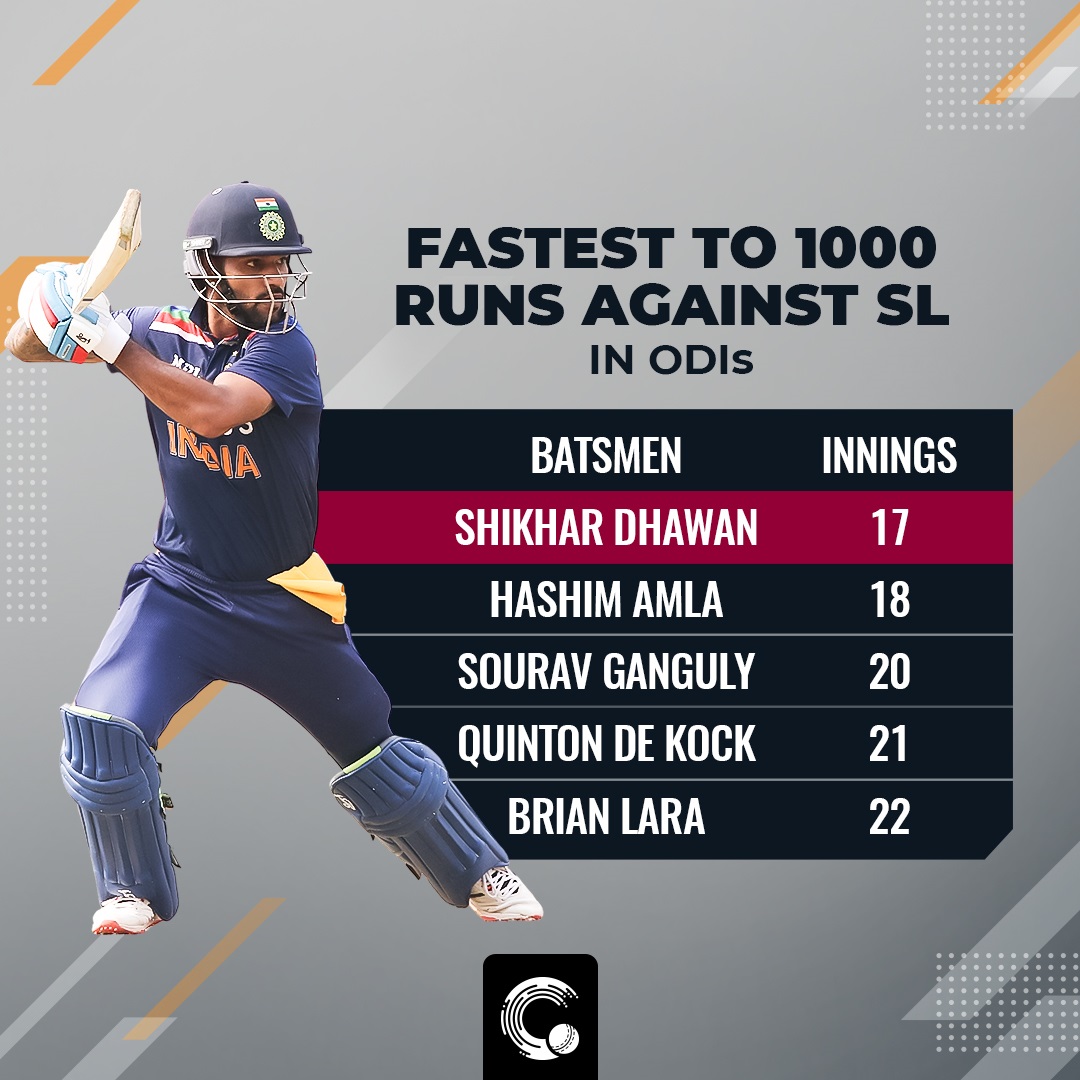 Kishan makes a mark in his debut 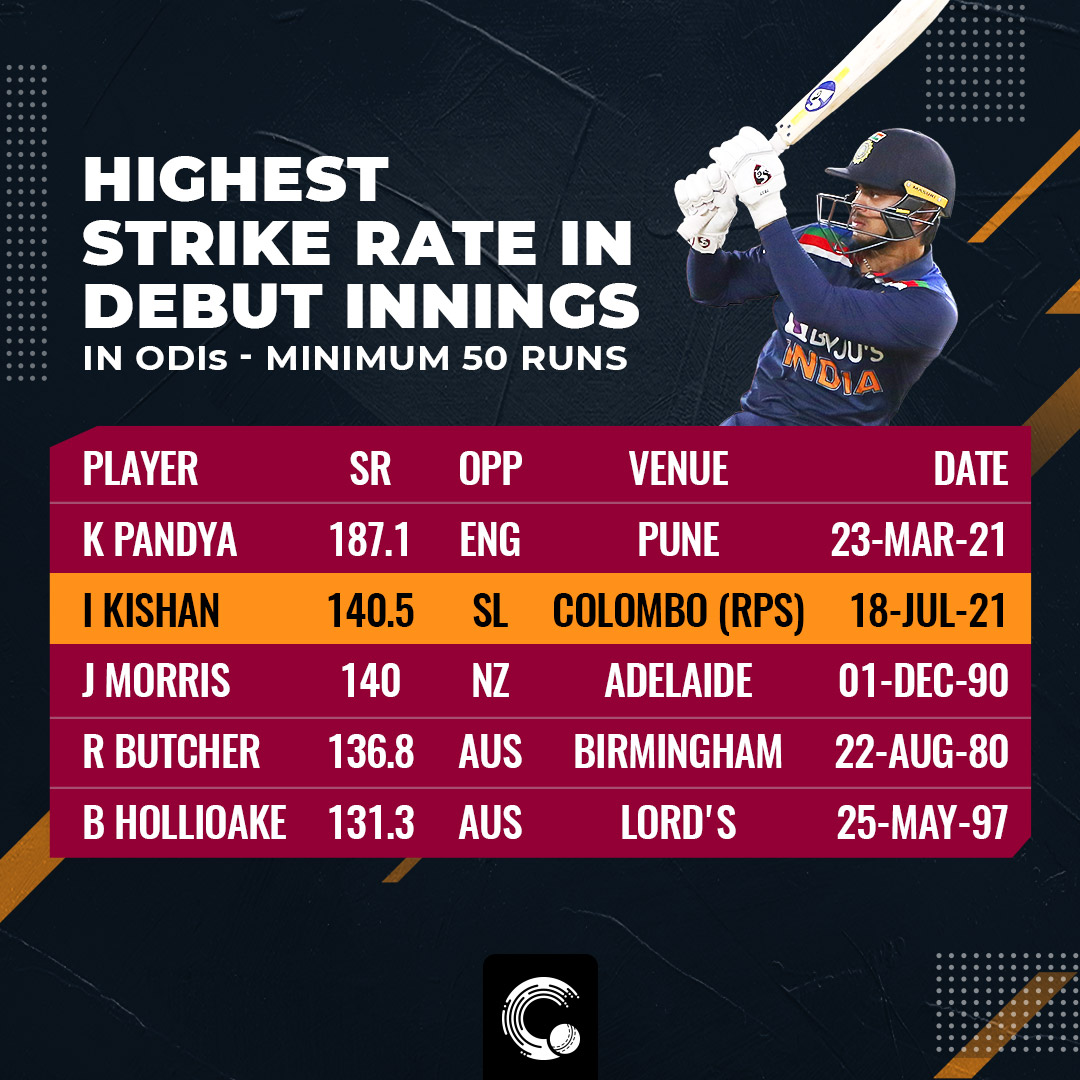 In his T20I debut, Kishan was exceptional against a strong English bowling line-up. In his ODI debut, in foreign conditions, the young wicket-keeper excelled in every aspect by scoring 59 runs in 40 balls at a strike rate of 140.5. This is the second highest strike rate for a batsman who has scored 50+ runs on debut. In addition to his achievement, Kishan became the second Indian to score 50+ runs on debut across multiple formats. Pravin Amre scored a 50+ on his Test debut as well as ODI.

A win to start a captaincy career is good, but the captain being one of the reasons behind the win is considered to be a fruitful start. None better than Dhawan would have experienced this. Enjoying from the other end, Dhawan played the sheet anchor role and scored an unbeaten 86 of 90 balls to guide India to a win. Only one batsman had scored more runs than him on captaincy debut. Sachin Tendulkar in his captaincy debut against Sri Lanka in 1996 at the same venue.