Domestic talents to watch out for - Sanvir Singh, Samarth Vyas, and more 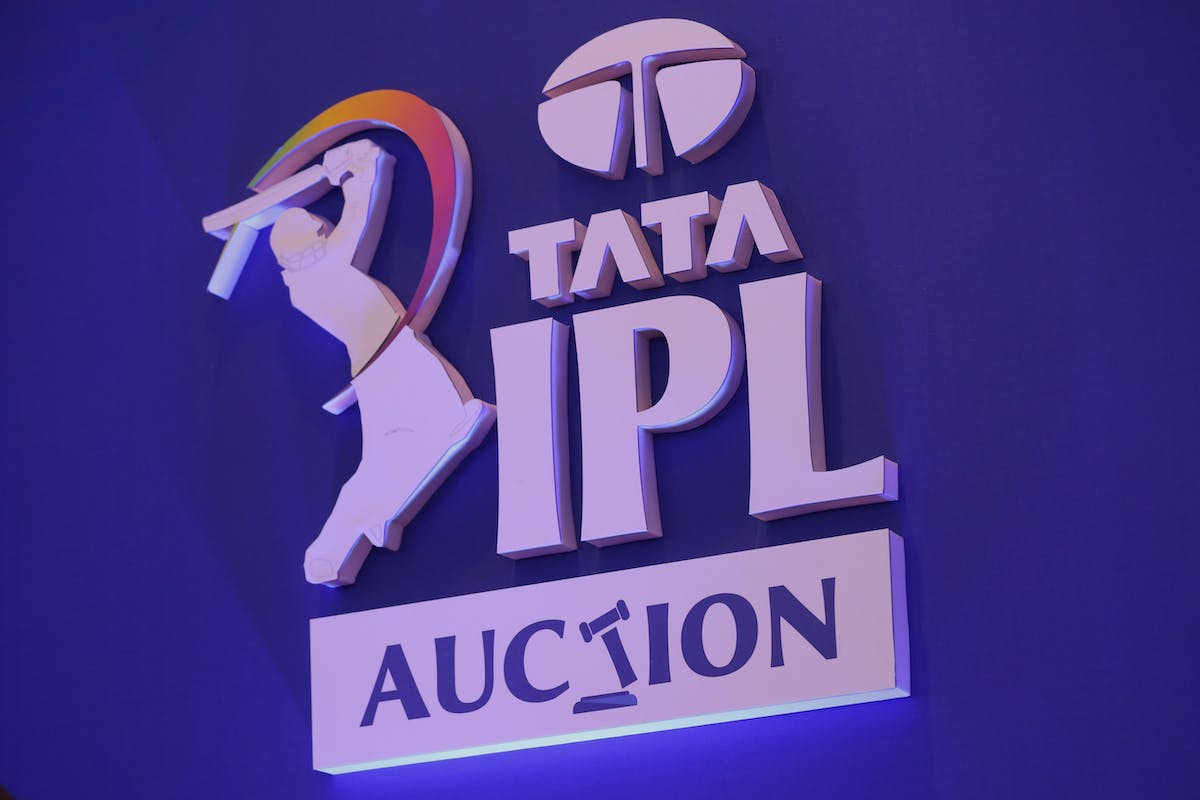 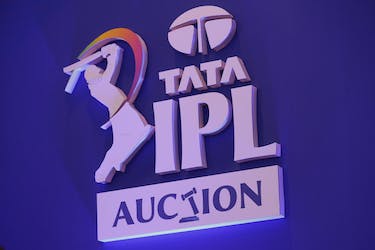 Domestic talents to watch out for - Sanvir Singh, Samarth Vyas, and more

We are just a day away from the mini auction for the 16th edition of the India's marquee league. In total, 405 players are shortlisted from the allotted 991 and will go under the hammer on 23rd December 2022.

Quickly, we will look at some of the Indian domestic players who could pull-out some attractive bids on the back of a great season of Syed Mushtaq Ali 2022/23:

In seven innings, he scored 314 runs at a staggering strike rate of 177.4 and maintained an average of 52.3. Most of his innings came as a number three batter. However, his most effective ones came when he batted at number four. 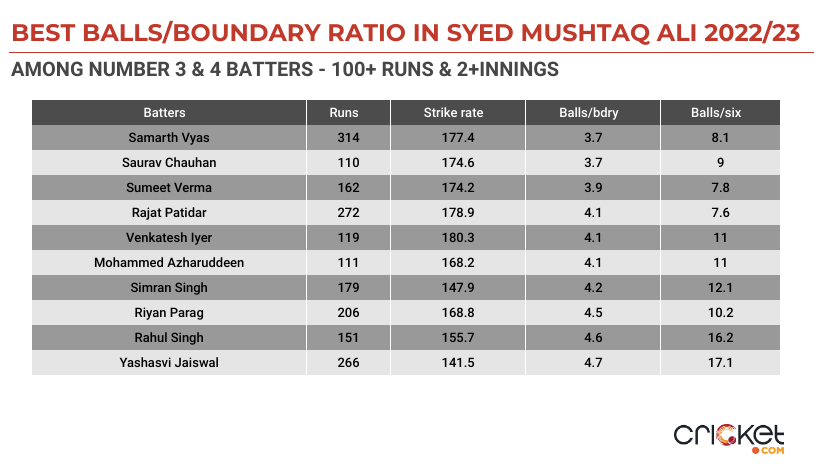 Though he batted only two innings at number four, he scored 194 runs at a strike rate of 188.3. In both his innings he scored 97. Overall, his 314 runs came as a number three and four batter. Among 38 batters to score more than 150 runs batting at number three, four, five and six, only Rajat Patidar (178.9) had a better strike rate than Vyas (177.4). But, none had a better balls/boundary ratio (3.7) than Vyas. An Indian middle order batsman who can bash, a dream player for any team.

There is always a lot of demand for finishers, and if a batter can strike above 200 after scoring 100 runs batting 5 or lower, then he is certainly in for a bid. 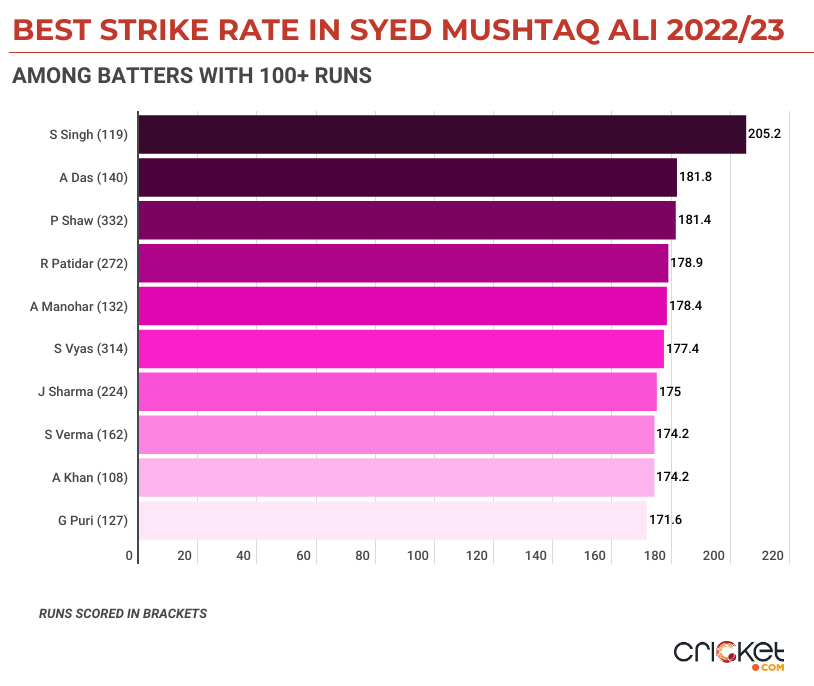 Sanvir Singh is one of those domestic talents who could entice a bid war. In the recently completed SMAT season, he scored 119 runs at a whopping strike rate of 205.2. Among batters who scored 100+ runs, his strike rate was the best in the tournament. All his five innings came as a number five or lower batter. Overall in T20s, he has a strike rate of 186.4 in eight innings. As an add on, he has the ability to roll his arms over as well.

The left-handed batting all-rounder from Himachal made his T20 debut in 2019. However, his breakthrough season came this year.

Himachal were the runners-up of the last edition of SMAT and Akash’s role in their campaign was a vital one. The middle order batsman batted most of his innings at number five and scored 150+ runs at a strike rate of 177.3. Overall, he scored 216 runs in five innings and batted five or lower in all the five. He had an overall strike rate of 163.6 and a balls/boundary ratio of 4.7.

Among 33 players who hit 200+ runs, only seven players had an average of 50+ and strike rate of 150+ and Akash was one of them. As an addition, he picked up four wickets in his nine overs by conceding only 4.2 runs per over. Another dashing finisher up for grabs.

There are a lot of requirements of Indian wicket-keepers in the upcoming auction and Urvil could be one of them for sure.

For most of his T20 career, Urvil has opened the innings. He has scored 69.1 percent of his runs as an opener. Also, his strike rate as an opener is far better when compared to the other positions he has batted. He has a strike rate of 153.3 as an opener (21 innings) in comparison to 135.3 as a non-opener (12 innings).

In recent times, Madhya Pradesh have produced some quality players. Add Ashwin to the list of players like Rajat Patidar, Venkatesh Iyer and Kumar Karthikeya. The 27-year old all-rounder made a mark in the last season of SMAT. He not only scored runs, but also was amongst the wickets.

Vidwath Kaverappa has been the find of the season for Karnataka. The 23-year-old has been impressive in all three formats and it won't come as a huge surprise if some of the teams show interest in him. 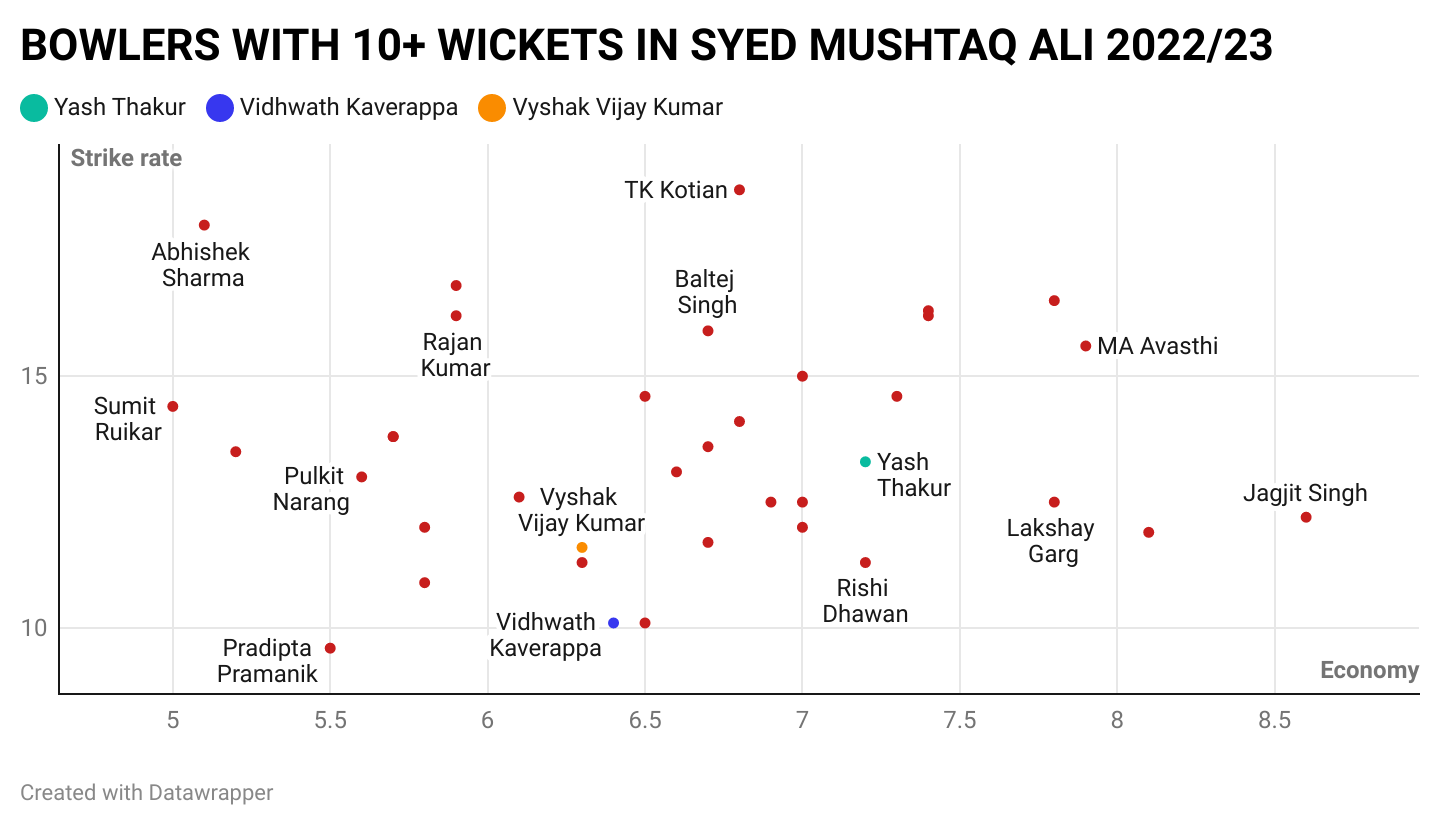 Born and brought up in Coorg, Kaverappa played basketball and football at school and represented Karnataka in handball Nationals. By the age of 10, Kaverappa had taken a serious interest in playing cricket and here he is on the verge of getting picked in the IPL.

Another young right-arm pacer from Karnataka who had a stellar SMAT. The 25-year-old made his debut last season but it was this year that he forced everyone to sit up and take notice.

Vyshak took 15 wickets in eight innings and operated at a strike rate of 11.6 and an economy rate of just 6.31. He claimed two or more wickets in six out of those eight innings. Vyshak has always had that raw pace but has now developed a pretty good knuckleball and was Karnataka’s go-to bowler at the back end of the innings. He was also Kolkata Knight Riders’ net bowler in the IPL 2021.

The right-arm seamer from Vidarbha might be only 23 but he has been around for a while. Thakur has already featured in eight first-class, 28 List A and 37 T20 encounters. His numbers in the shortest format of the game are quite impressive - 55 wickets at a strike rate of 12.9 and an economy rate of 6.68.

Even in the last edition of the SMAT, Thakur took 15 wickets in 10 games at an economy of just above seven. He has worked with a couple of IPL franchises as a net bowler and could be on the radar of some of the teams who need a reliable Indian seamer.