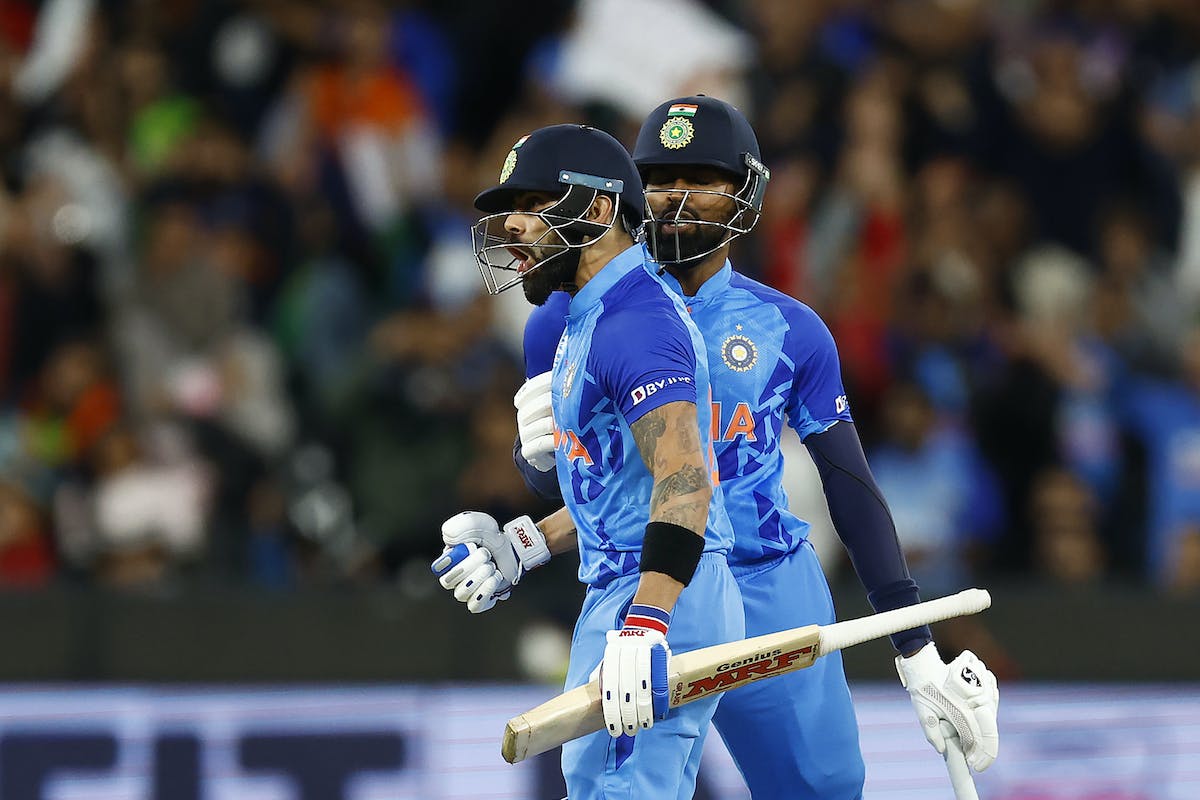 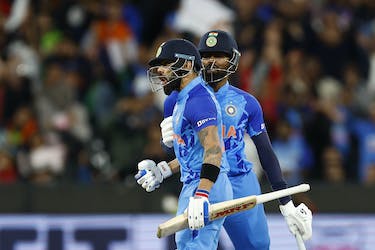 Hardik Pandya, who had the best seat in the house to enjoy the spectacle, couldn’t control his emotions thereafter

It was the night of Virat Kohli. Down and Out, when India were staring down the barrel to start yet another World Cup on a losing note, that too against archrivals Pakistan, Virat Kohli reigned supreme and how! Didn’t leave anything to chance and made sure India had their chances by hitting two glorious sixes off Haris Rauf, night’s best bowler by a margin, to keep India in the touching distance of a win.

Hardik Pandya, who had the best seat in the house to enjoy the spectacle, couldn’t control his emotions thereafter. Normally Pandya likes to keep his emotions in check during such time but it was clearly written in his face when Pandya jumped in joy after the sixes.

"Those two shots - I knew how important those two shots were. Let's be honest, even if you [looking at Kohli] had missed one, they were running ahead of us,” Pandya said, while sitting down for a conversation with Kohli for BCCI.TV.

"I've hit a lot of sixes but those are special, special, and really special in my heart now because of what it meant for both of us. I've played cricket, so much cricket, but I don't think anyone could've played those two shots except Kohli.

"The best part about what I loved about him [doing that] is we struggled, bro. Why it was so special was we struggled together. This would've been not this special if we had just cruised through. You would have played exceptional shots, I would have been [in the flow]... This was special because we knew we'd struggled."

On a personal level, this was also a test of character for Hardik Pandya. Even though 2022 has proven to be one of Hardik’s best years, in terms of leadership skills and how effortlessly he has managed that, in the back of his mind, he was just happy to be out there in the middle after struggling with back issues for the last couple of years.

"I sensed a lot of pressure in the group," he said. "With all due respect, a lot of people in big games feel pressure and know how important it is. We all have worked very hard as a collective, and people are happy for each other.

"But for me, I don't know, I was very numb today. Even when I came on the ground, I was very happy and I was speaking to Rahul sir as well initially, I wouldn't say he was tense but he told me: 'you have done a lot of things', and 'be calm' and all that. I had to tell him: 'sir, please understand I'm happy to be here. Ten months back, I was working in my space and I had no idea and this is where I wanted to be, irrelevant of what happens. Just happy to be here, playing with all the best cricketers in the world, and they are my brothers.

"The quality of relationship that I have with this group is something I cherish and always cherish. When I was coming inside [to bat], I would have taken a bullet for you [Kohli] at that point of time, I would not have let you get out at that point of time. My goal was simple: whatever I can to make your life easy [do it], because you have done this over the years in crucial games. No one is better than handling pressure than you."