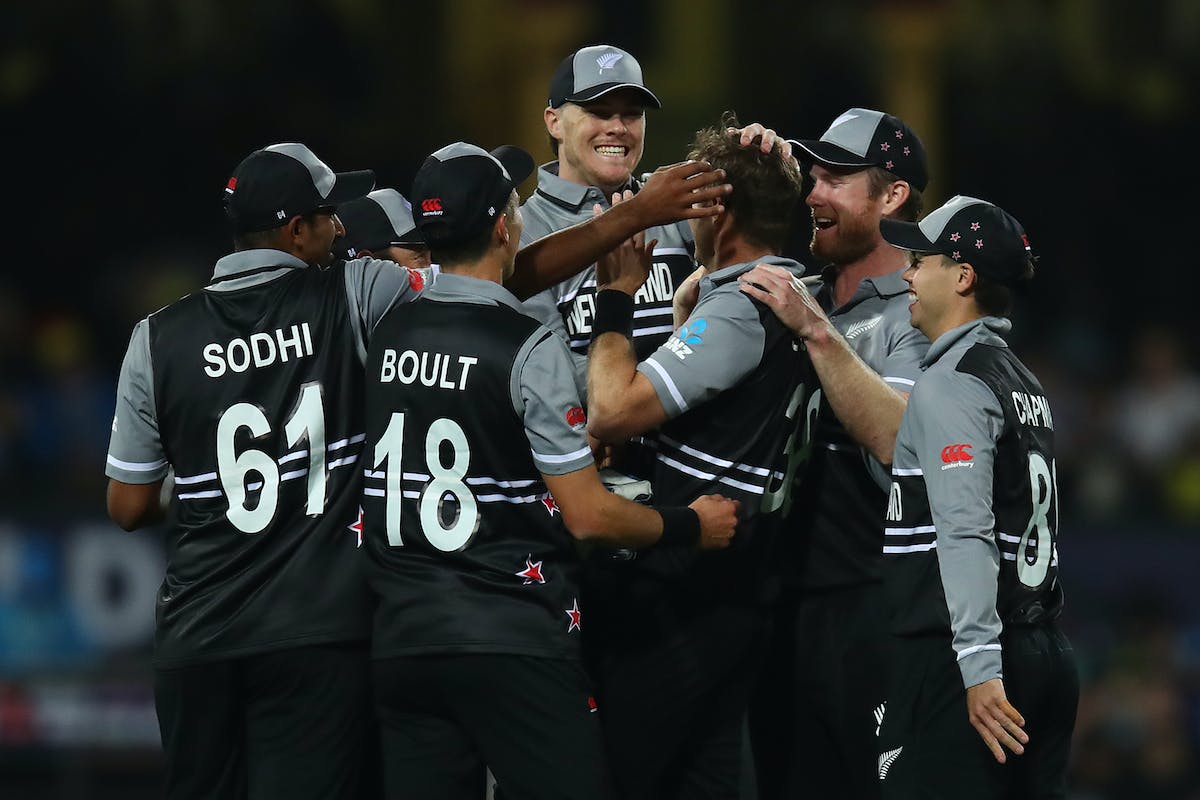 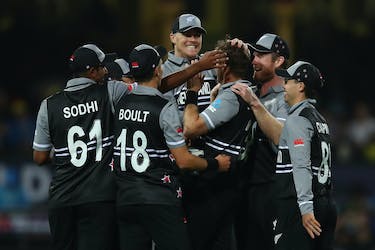 New Zealand haven’t won a game in Australia across formats since 2012. The ground dimensions and the conditions are so different that it’s almost alien to the Kiwis. Except Kane Williamson and Martin Guptill, no other New Zealand batter has ever played a T20 match in Australia.

These were the arguments given that deemed Australia favorites to roll over their Trans-Tasman rivals in the Super 12 opener. However, staying true to their character, the Kiwis overpowered all these factors not just to beat but romp over the Aussies. It is a World Cup after all. Something clicks in the Kiwis that elevates them above all odds. In Sydney, they did exactly that.

Finn Allen changed that today. It is widespread knowledge that he is high on intent. Prior to this match, he had a strike-rate of 179.3 in the powerplay, the highest for any batter with more than 500 runs during field restrictions since 2021. But his onslaught against Mitchell Starc in the very first over took everyone by surprise. It shocked Australia more than anybody else. The 23-year-old hammered two fours and a six in the first over, with each shot being a statement. 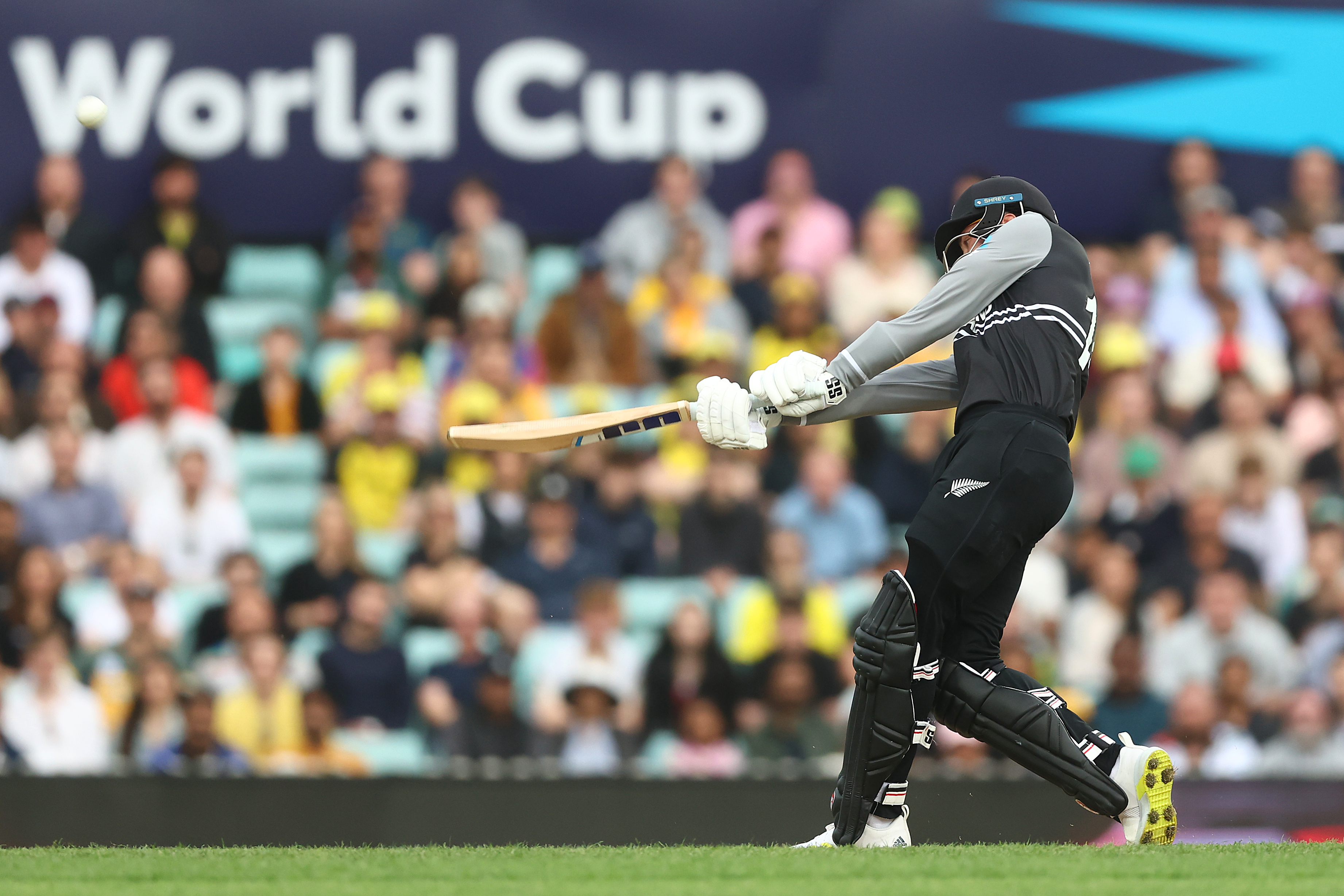 In the first four overs, the Kiwis were 56 for no loss with 42 coming from the bat of Allen. It is the joint most Australia have conceded in the first four overs. For New Zealand, it is the most they have scored since 2019. The headstart provided by Finn put the Kiwis so far ahead in the game that the Aussies just couldn't catch them. The Kiwis bore the fruit of bringing him in at the cost of their veteran, Martin Guptill.

“They set the tone in the first 4 overs and we didn't recover,” said the Australian skipper Aaron Finch, acknowledging the same.

Often batting sides lose their way post-powerplay. New Zealand were under the same threat once Allen was dismissed in the fifth over. With Kane Williamson and Devon Conway in the middle, it appeared the natural progression for the innings to lose steam. However, Conway was proactive to keep the run-rate on course once the field was spread. His strike-rate didn’t go below 140 at any point in the innings. 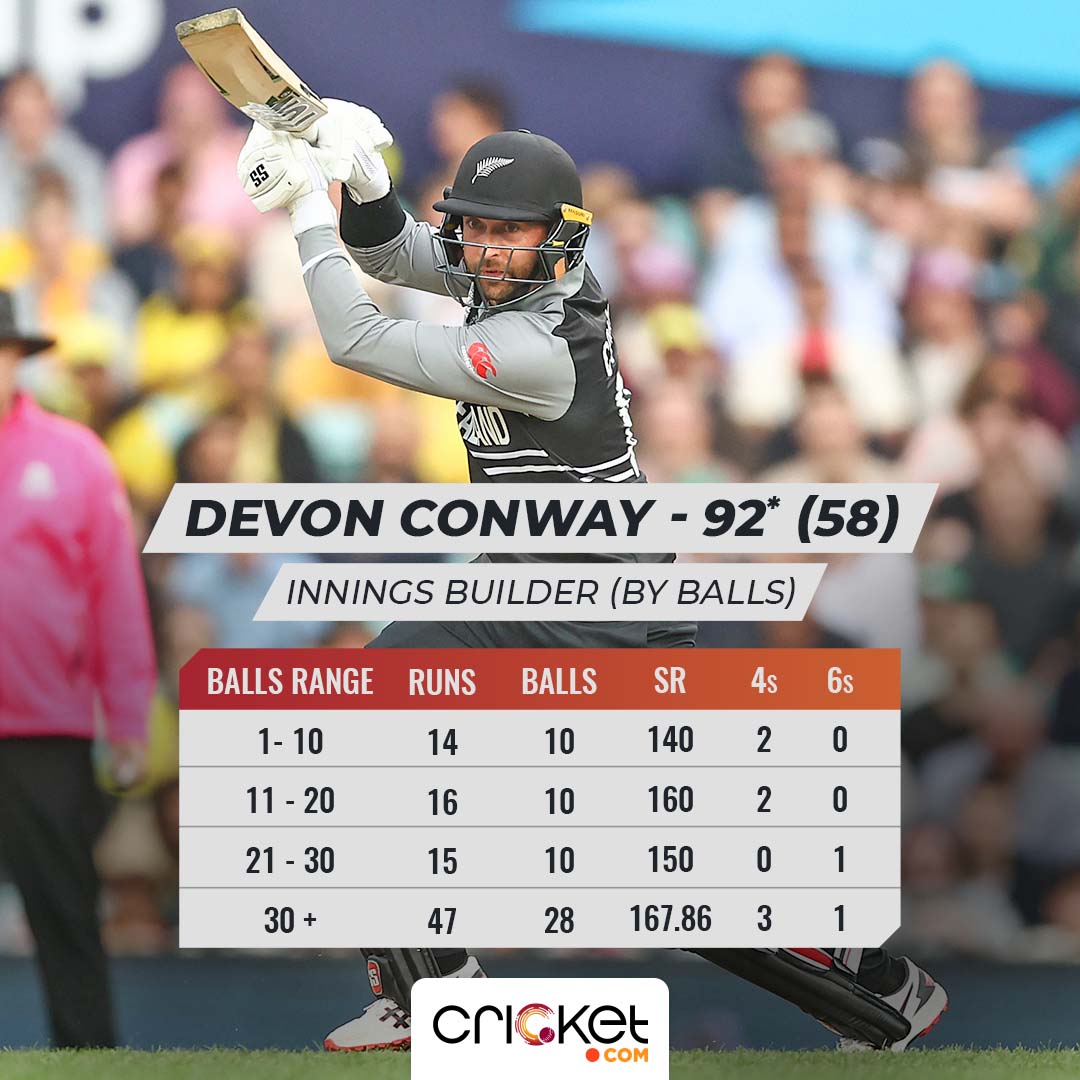 In the 69-run stand with Williamson, the left-hander contributed 45 off 30 balls which accommodated his skipper’s slow start. The acceleration from Conway was based on his strong game against spin. He churned out 32 runs off 17 balls against Adam Zampa in the middle-overs. That is nearly 71% of the opposition’s MVP bowler that Conway negated while scoring at a strike-rate of 188.2. If Allen pushed Australia back in the powerplay, Conway flattened them in the middle-overs. 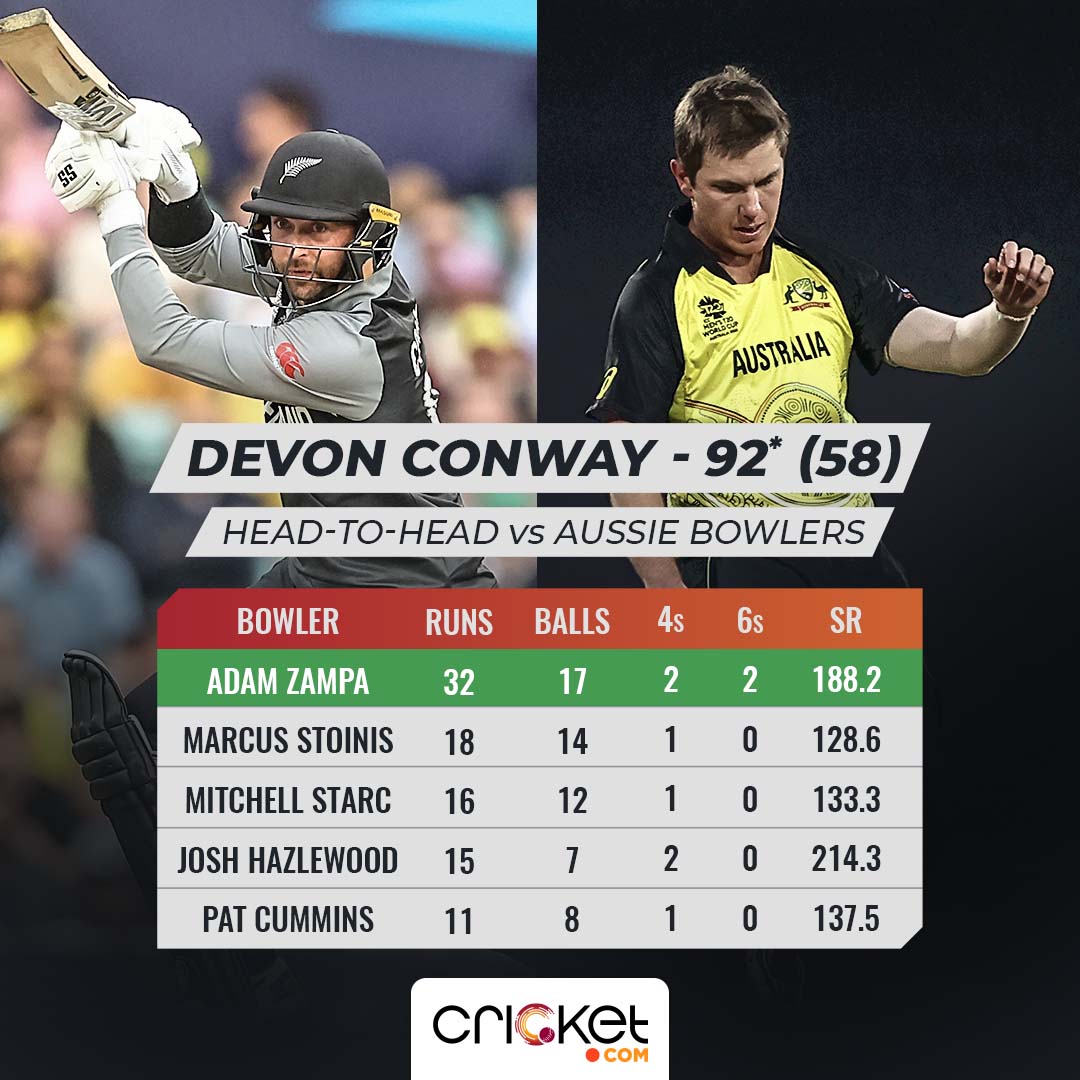 Overall, Conway held the innings together and accelerated simultaneously. All of it was based on finesse and finding the gaps. Seven of his nine boundaries came in the off-side or straight down the ground.

A good batting powerplay is imperative to chase down 200+ totals. Among 1840 T20Is played as yet, only twice a team has chased down over 200 totals after losing three wickets in the powerplay.

On one of those occasions, England scored 89 during the field restrictions which paved the way to a successful 230-run chase. In the other instance, Australia were 36/3 in their six overs while chasing 205 but had David Warner still out there. Batting at four, Warner scored 77 off 40 balls.

On Saturday (October 22), Australia neither had runs like England nor Warner to usher them through the middle-overs.

He was once again the key to Australia’s fortunes in Sydney - to play a Conway kind of role which Warner has mastered himself. But New Zealand dismissed him in the second over and made it a double whammy with two more strikes. At the six-over mark, the hosts were 37/3 with Warner back in the hut. Even for a batting line-up like Australia which has Mitchell Starc at number 9, it was a bit too much to recover in a run chase of 201. 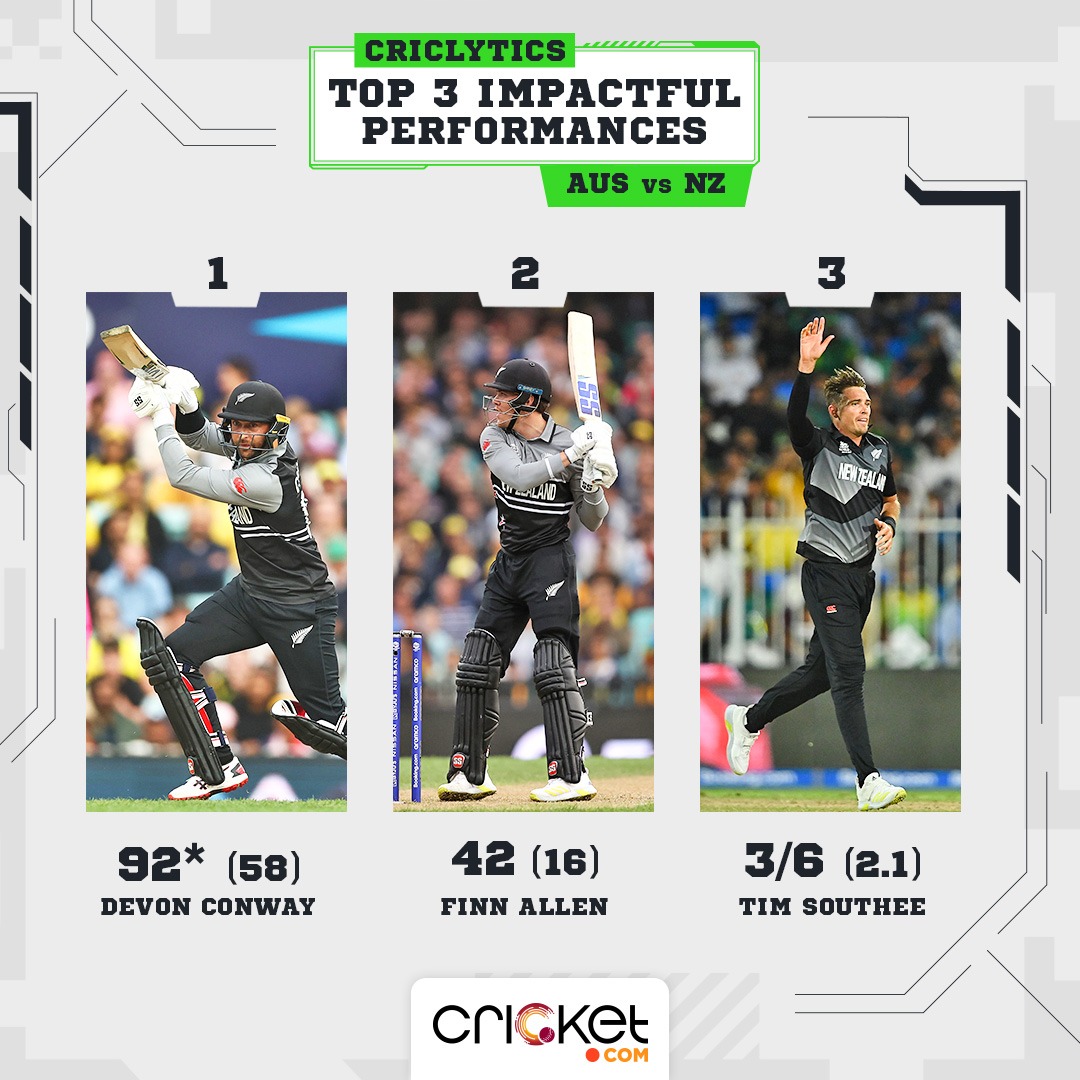 One can also question Aaron Finch’s decision to bowl first. Seven out of the 10 matches in SCG before this fixture were won by the side batting first. Moreover, bowling in the evening provided the Kiwi bowlers with a hint of assistance which they maximized to their advantage. Tim Southee was at the helm of it, with figures of 2/6 in his two overs with the new ball.

In circumspect, New Zealand followed the basics of cricket - runs on the board followed by early wickets. Australia would know it was a bad day to begin their defense of the trophy. Warner was unfortunate to suffer a double deflection off his legs and the bat onto his stumps. But it added another chapter to this tournament which has already given us many unpredictable results.