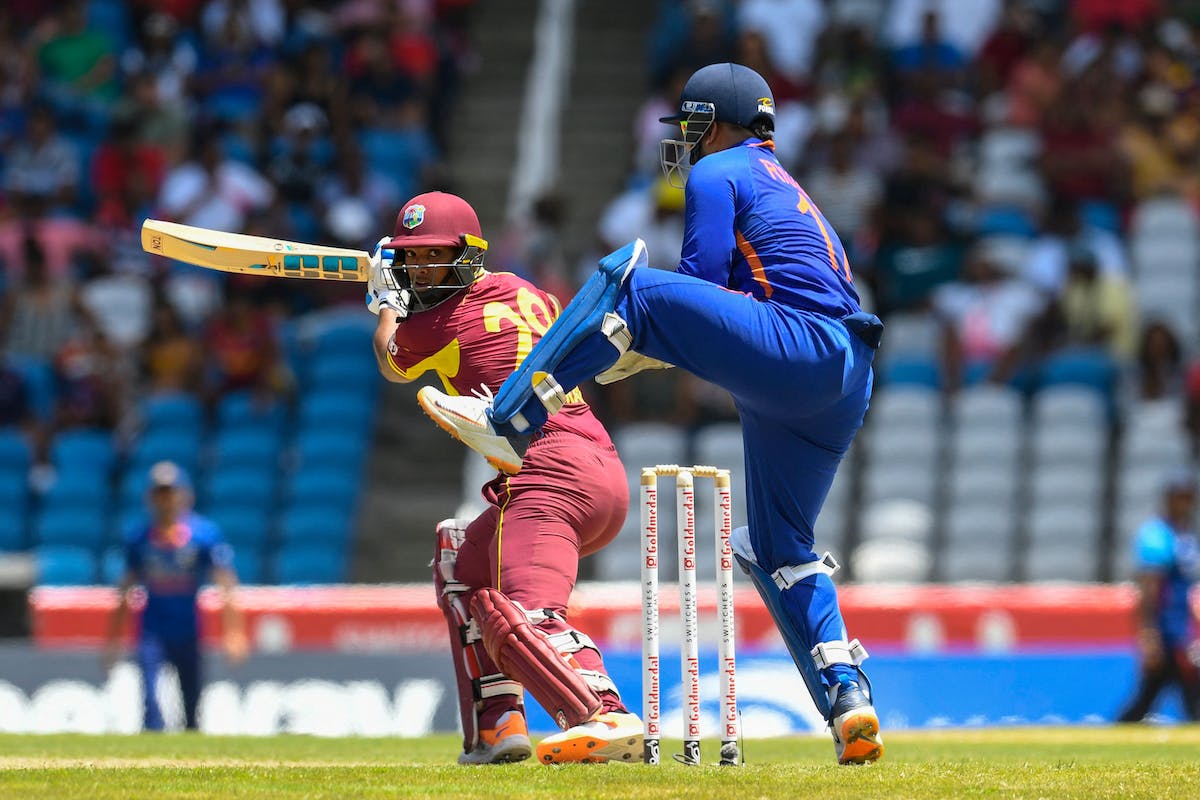 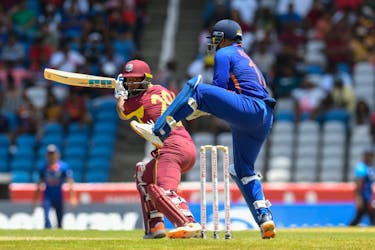 West Indies, still looking for their first win of the tour, look to bounce back in the second T20 International (T20I) against India at Warner Park, Basseterre. India thumped West Indies by 68 runs to go 1-0 up in the five-match series.

India have been absolutely dominant against West Indies in T20Is, winning all the previous five meetings against them. The last time West Indies defeated India was in 2019 in Trivandrum.

In the previous edition of the Caribbean Premier League (CPL), it was the pacers who ruled the roost picking up 64% of the wickets to fall. Their wickets came 23.5 runs and 16.3 deliveries apart, compared to the spinners for whom the corresponding numbers were 24 and 21.6 respectively. 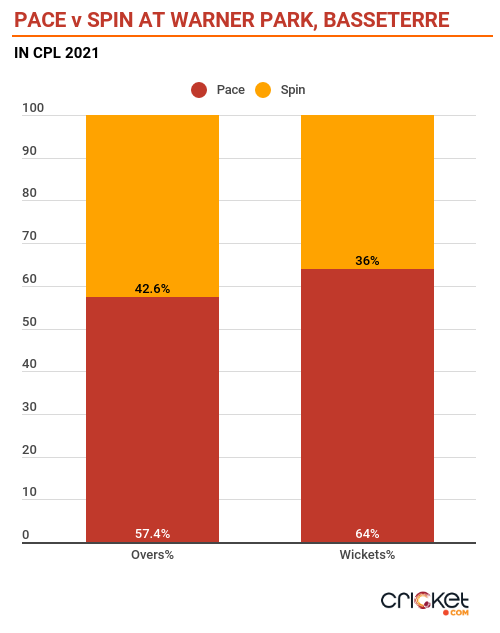 However, the spinners played a key role in choking the batters conceding just 6.7 runs an over compared to the fast bowlers who had an economy rate of 8.6.

India played three spinners in the first T20I, while West Indies played just one. We could see Hayden Walsh roped in for the hosts to support the left-arm orthodox option of Akeal Hosein.

A good combination of pacers and spinners could be the way to go at Warner Park for this game. 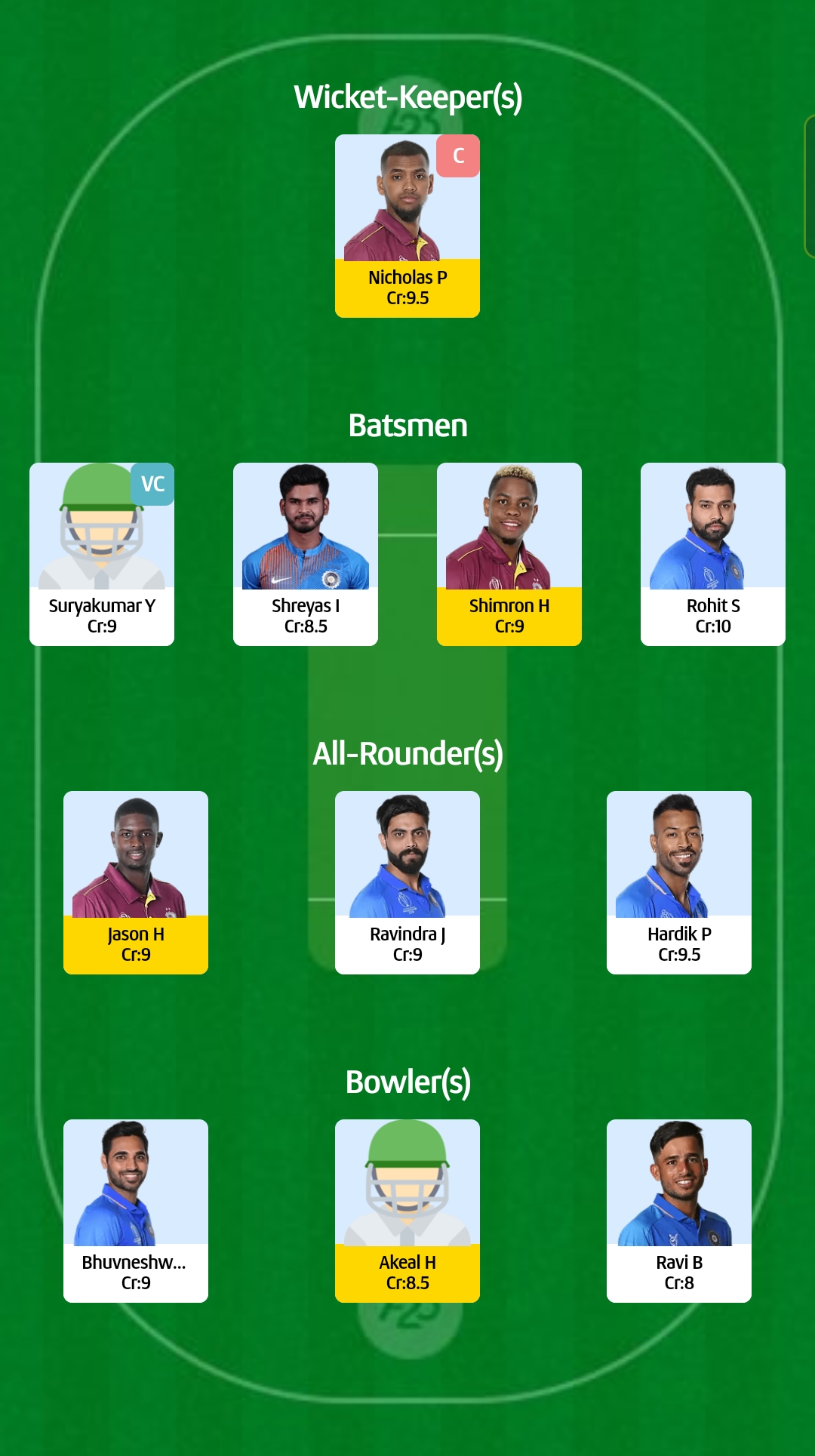 India have the best balls per boundary ratio (4.7) in T20Is this year, significantly better than West Indies (5.9). The visitors have also scored at a run-rate of 9.5, which is the best after New Zealand (10.2).

No batter has scored more runs than Nicholas Pooran in T20Is this year. The West Indies batter has scored 474 runs at 52.67, along with a strike-rate of 135.8, which includes five fifties from 11 innings. Pooran has gotten off to starts in all the white-ball games on this tour and will look to play a match-winning innings in this game to help his side level the series.

While Suryakumar Yadav may have opened the innings in the first game, but he is sure to have more of an impact in the middle-order. He is India’s leading run-scorer in that position (4-7) and his strike-rate of 202.1 is the highest for anyone batting in that position (Min: 120 runs).

Bhuvneshwar Kumar has the most wickets in the powerplay in T20Is this year. In fact, among Indian bowlers, Avesh Khan with just five scalps is the next best.

With 11 wickets to his name, Jason Holder has the most scalps by a bowler at the death. His wickets have come every 6.3 deliveries, 12.1 runs apart. That comes to approximately a wicket every over.

A four-ball duck in the first T20I does not take away from the fact that Shreyas Iyer has had a brilliant year for India in T20Is. He is India’s second-highest run-getter in the format this year with 351 runs at 50.14, striking at nearly 150. He came into the series at the back of 44, 63 and 54 in the ODIs. Safe to say, he is a good form.

Whether he plays in the second game or not is a different issue, but Ishan Kishan has been India’s best batter this year with 419 runs at a strike-rate in excess of 132. Only Sikandar Raza (454) and Pooran (474) have scored more runs than him this year.

Among spinners, only Yuzvendra Chahal (15) and Sikandar Raza (14) have picked up more wickets than Akeal Hosein (11) in T20Is this year. Hosein has been particularly effective in the middle-overs where he has picked up seven wickets at an economy rate of 6.5.

Here are the top 10 Criclytics Projections: 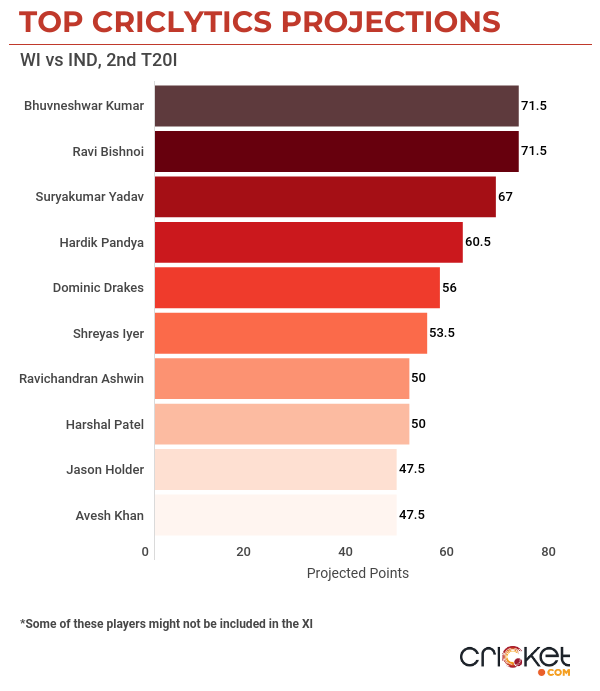 *All stats from players/teams among full-member nations, unless stated otherwise.