Fantasy: Hasaranga, Theekshana could run through the Namibian batting 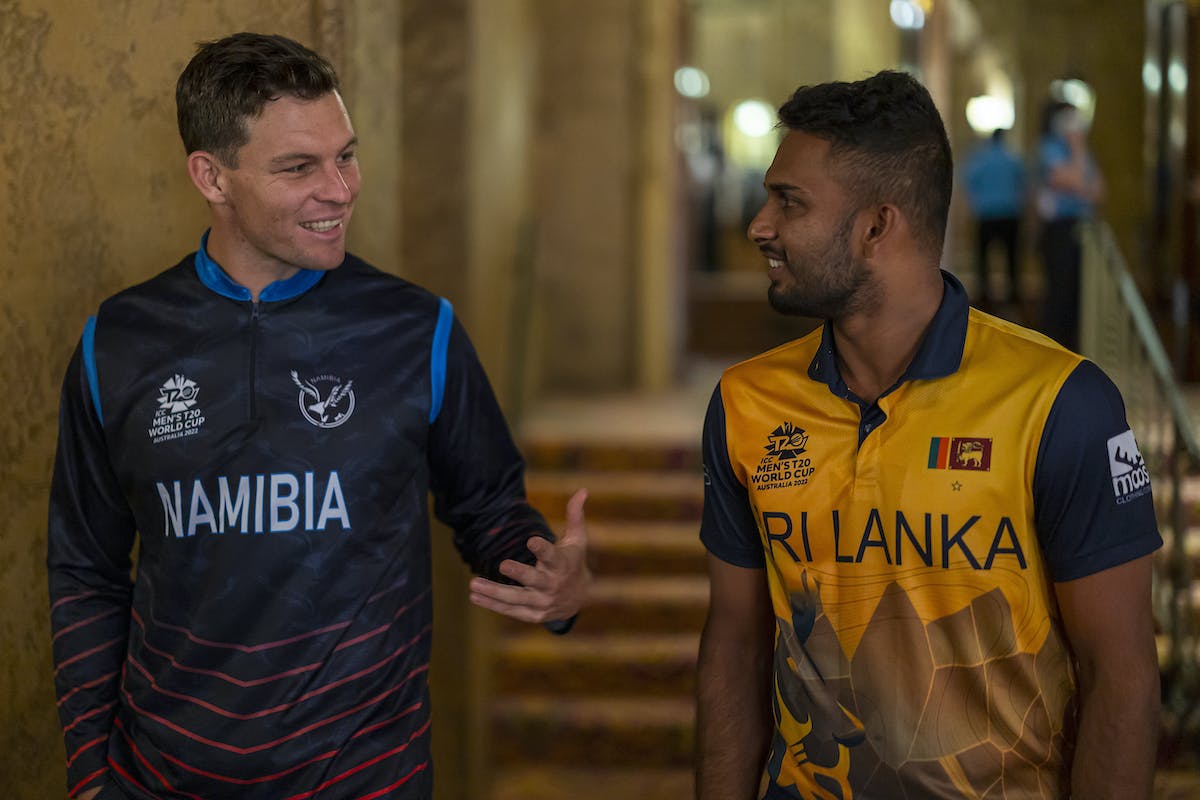 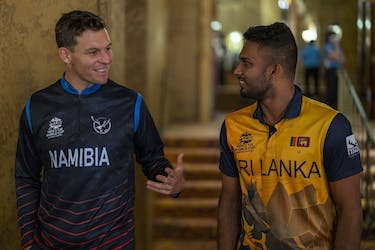 Fantasy: Hasaranga, Theekshana could run through the Namibian batting

The 2022 T20 World Cup kicks-off with Sri Lanka and Namibia locking horns in the first round at the Simonds Stadium in Geelong. Sri Lanka are the favorites to top this group, owing to their brilliant T20 form of late which saw them lift the Asia Cup last month. At the same time, Namibia cannot be taken lightly even though they have not played any T20I cricket since May.

The Simonds Stadium in Geelong has hosted a solitary T20I, way back in 2017. Considering the Big Bash League, the venue is short of data, with only three matches since 2021. The average first innings score in those three games has been 158 - with scores ranging from 128 and 196.

The pacers have picked 72% of the wickets here. They average a staggering 17 runs per wicket in comparison to 30.8 from spinners. Even in the middle-overs, which is spinners’ territory, they have struck at 19.6 runs per wicket as compared to 23.7 by the spinners.

However, Sri Lanka have some ace spinners who shouldn’t be missed out on. 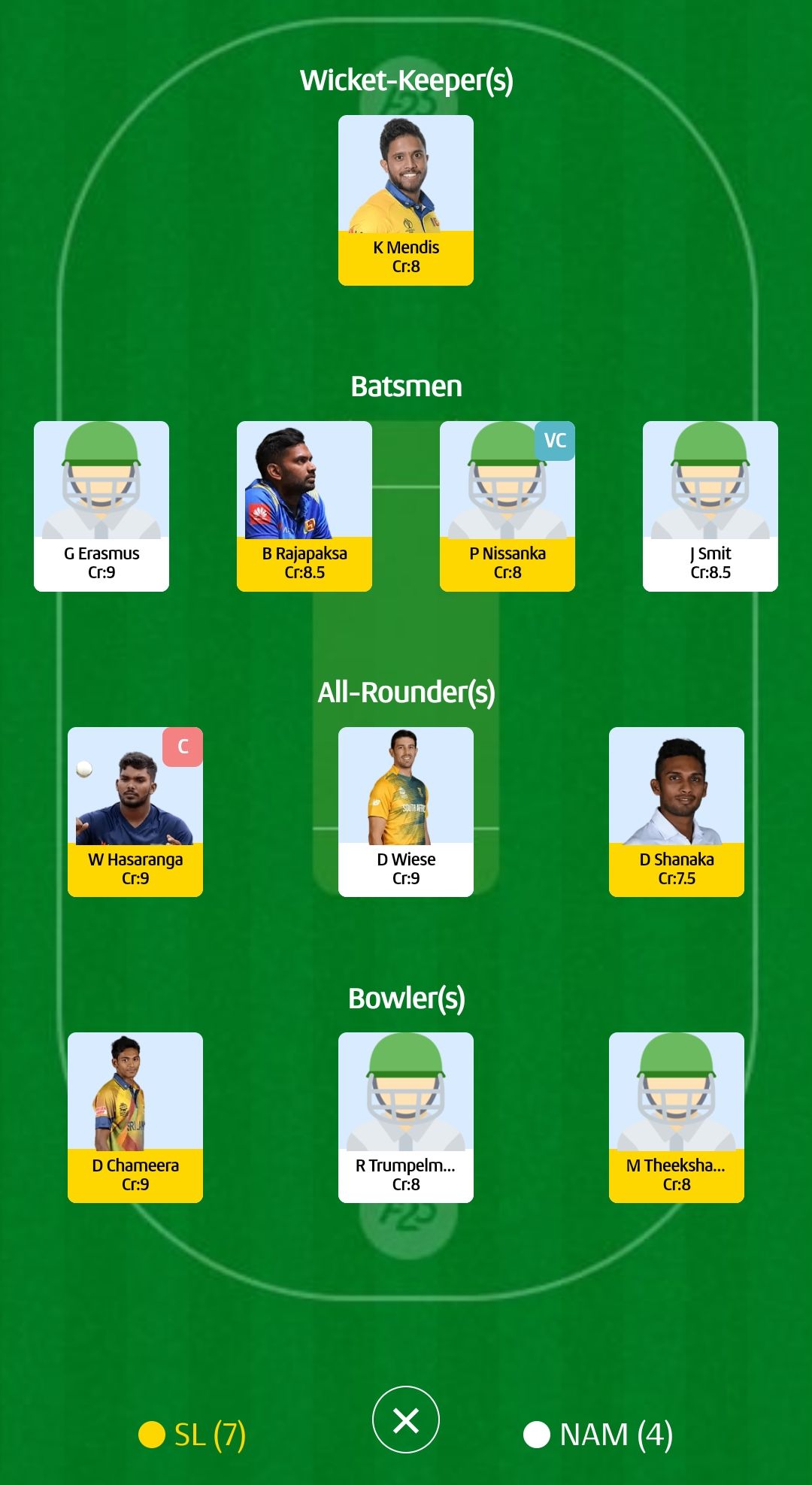 - Wanindu Hasaranga is a no-brainer to lead your fantasy fortunes in this match. He is Sri Lanka’s X-factor player and his bowling is enough to help you gain valuable points. He is the highest wicket-taker for Sri Lanka this year - 19 wickets in 11 matches. The fact that leg-spinners are mostly effective against Associate nations puts more emphasis on Hasaranga. And we haven't spoken about his fielding and batting as yet.

- In a similar vein, Pathum Nissanka has been the highest run-scorer for Sri Lanka this year - 499 runs in 17 innings. What works in Nissanka’s favor is the modus operandi of the Sri Lankan batting. While everyone else is a basher, Nissanka can take his time to build a solid knock.

- The skipper Gerhard Erasmus will have the onus with the bat for Namibia. The right-hander is Namibia’s highest run-scorer this year, accumulating 254 runs at an impressive average of 50.8 while striking at 133.7. He is also the only Namibian player to notch up a T20I hundred in 2022.

- JJ Smit is a brilliant all-round package for Namibia. He bowls left-arm seam-ups alongside being a handy batter. Since 2021, he has 15 wickets in 14 innings. With the bat also he has scored 319 runs at an average of almost 40.

- This will be Namibia’s first T20I in Australia. Hence we have included only four Namibian players in our suggested team.

- There is no doubt David Wiese is the MVP of this Namibian side. A seam bowling all-rounder, the most experienced player in the side and someone who holds the experience of playing in Australia. He will clearly have a big role to play in all of Namibia games and hence, is a good captaincy candidate if you wanna hit the jackpot.

- An average of 31.6 alongside a strike-rate of 144.4. This is a killer combination for any middle-order batter. These are Bhanuka Rajapaksa’s numbers in T20Is this year. A no-brainer pick for your Fantasy XI, you can also make him the captain or the vice-captain of your side to win big bucks. 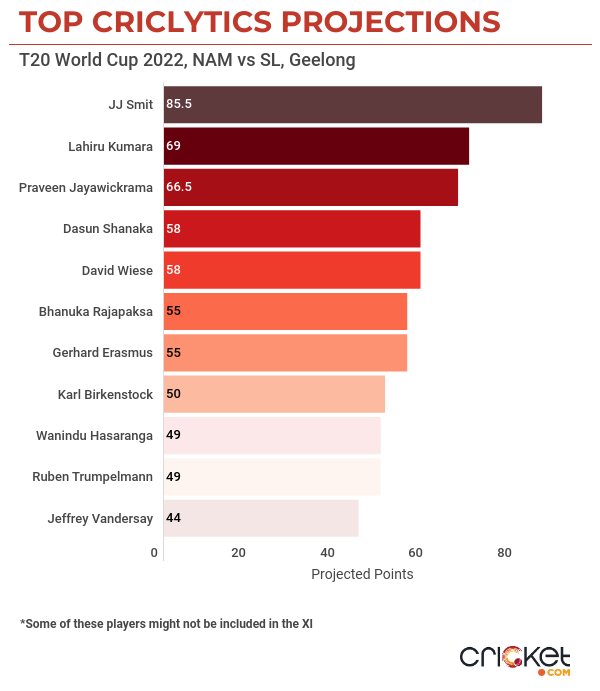