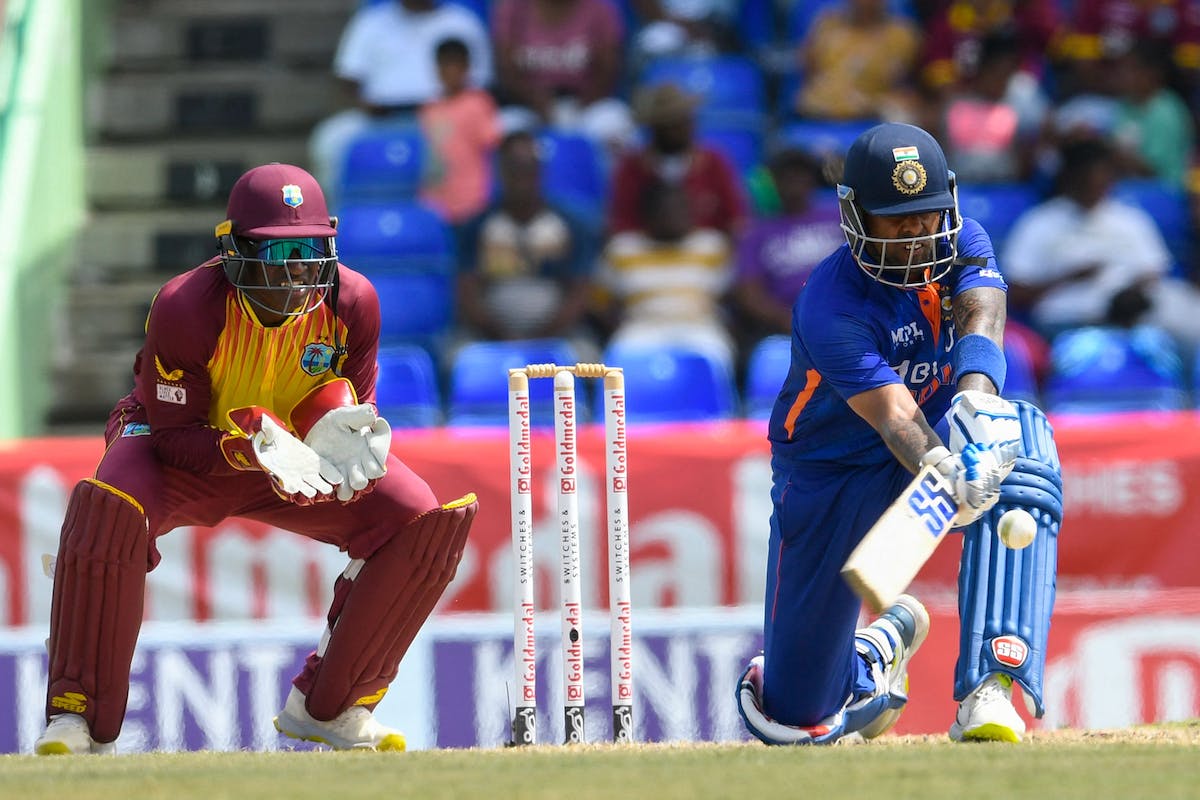 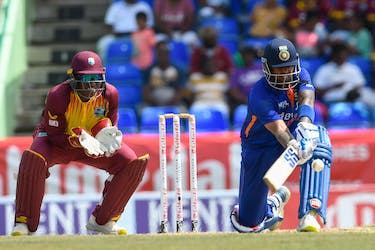 India will lock horns with West Indies in the fourth T20I in Bristol on Saturday (August 6). India lead the five-match series 2-1 after making a strong comeback in the third game. West Indies, having clinched the second game, will believe they can stay alive in the series.

The Central Broward Regional Park Stadium Turf Ground in Lauderhill has hosted two T20Is in this decade - witnessing two T20Is between Ireland and USA. The last time this venue hosted T20Is between two Test playing nations was indeed between West Indies and India, during the three-match T20I series in 2019.

Overall, nine out of the 11 T20Is at this venue are won by the side batting first. The average first innings batting score has been 161 which states that the venue does not see many high-scoring contents. However, the first ever West Indies-India contest here, way back in 2016, saw 489 runs scored in the 40 overs.

From the bowling point of view, the pacers have picked 62% of the wickets. But that doesn’t mean the spinners are falling behind in the race. In fact, they rule the roost in the middle-overs. In the middle-overs (overs 7 to 15), the spinners have accounted for nearly 52% of the wickets at an economy of only 7 runs per over. Nearly 32.9% of the overall wickets have gone to the finger spinners. 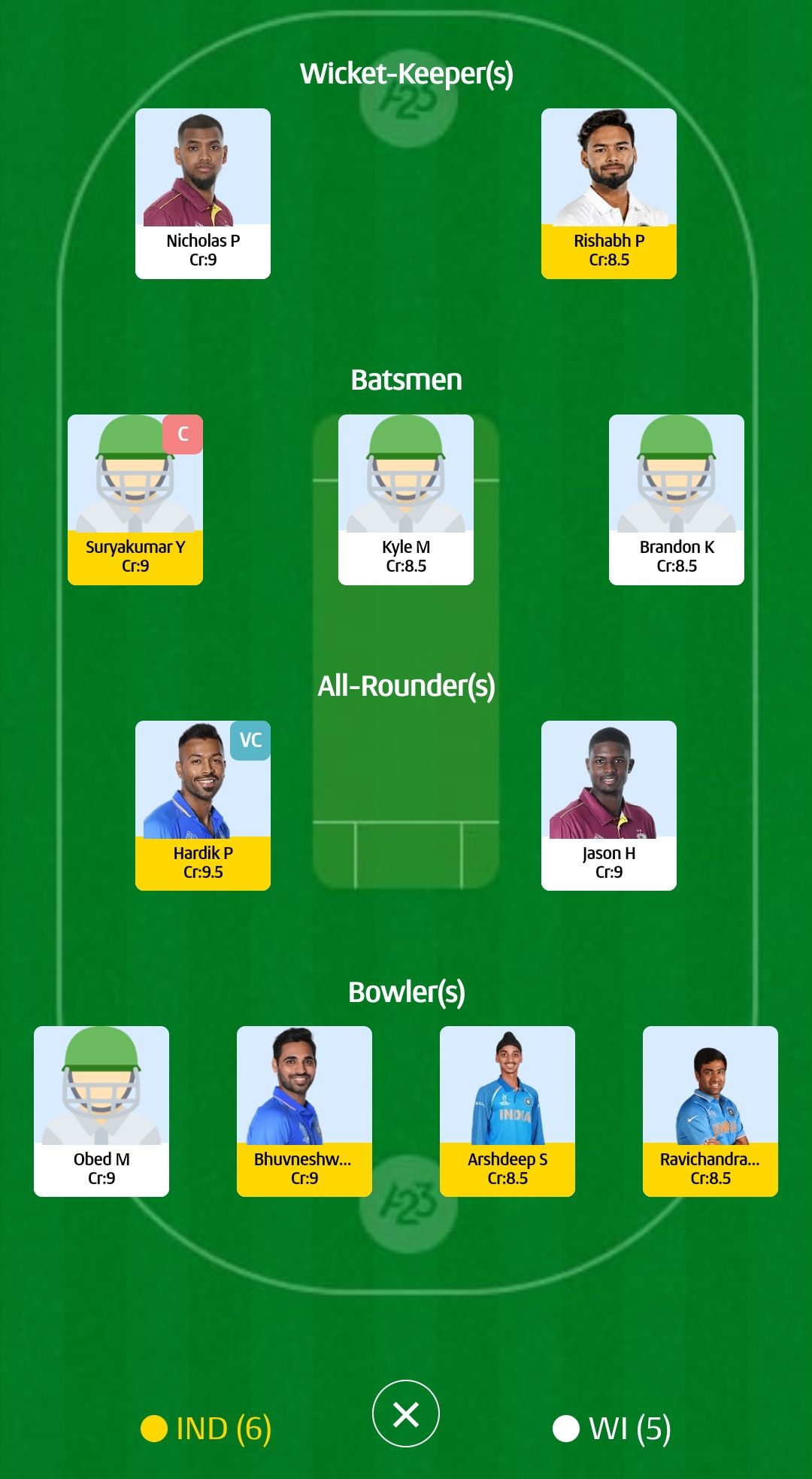 -Within a span of 22 T20Is in his career, Suryakumar Yadav has skyrocketed to the second spot in T20I batting rankings. This year, he averages 40.4 at a strike-rate of 190.6 which are ace numbers. Surya has a hundred and a fifty to his name in his previous four innings in the format.

-The fact that Hardik Pandya is bowling consistently alongside batting at a vital spot for the side makes him a great captaincy candidate for your Fantasy XI. He averages 31.6 with the bat this year in T20Is alongside picking eight wickets in 12 matches. Pandya is a banker and a must pick player for this contest.

-Bhuvneshwar Kumar has had the upper hand over Brandon King, conceding only 30 runs for two wickets in 35 balls against the Caribbean batter. However, his overall record against West Indies in the powerplay is grim - bringing him only five wickets in 17 matches at 43.5 runs apiece. King has averaged 30 in T20Is this year with two fifties in the last four innings. It can be an interesting battle between the two.

-R Ashwin has been wicketless only once in his last eight T20 international outings, dating back to November 2021. Overall, the off-spinner has seven wickets in nine T20Is against the Windies but given the help for the finger-spinners in the Lauderhill track, Ashwin is the best spinner to put your money on.

-Nicholas Pooran is yet to fire in the series but averages 46.4 with the bat this year. His control percentage of 72.3 is better in comparison to that in the last two years. In three T20Is against Kolkata earlier this year, the southpaw notched up scores of 61, 62 and 61.

There is a dilemma around the wicketkeeping options for this contest but among three clear choices, Pooran is probably the safest option. He can also be a captaincy candidate if you are willing to crack a grand league.

-22 of McCoy’s 29 wickets in T20Is have come while bowling in the first innings. If India bat first, McCoy will be a fantastic captaincy choice.

- In T20s since 2021, Rishabh Pant averages 31.3 while batting second as compared to 29.9 while batting first. Meanwhile, Dinesh Karthik has averaged 38.1 while batting first in the same period. If you are going for a second wicketkeeper alongside Pooran, your choice can depend upon the outcome of the toss.

-Harshal Patel was unavailable until the third T20I due to a rib injury. If fit now, he can replace Avesh Khan in the XI. 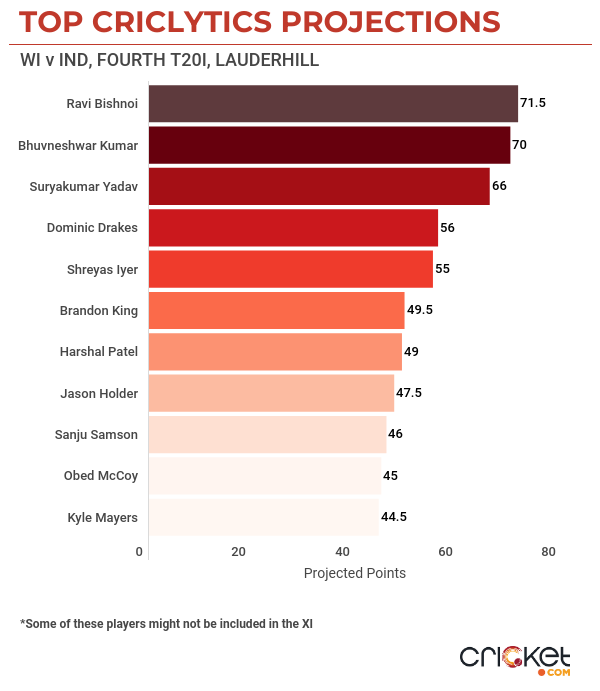