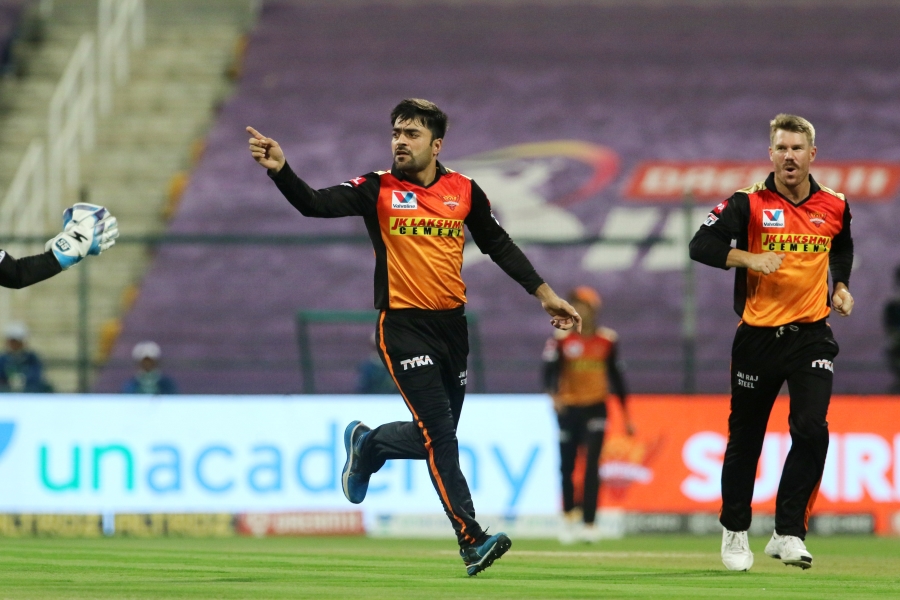 The 13th edition of the Indian Premier League was all about bowlers, with both pacemen and spinners making merry

The Indian Premier League (IPL) 2020 had plenty of riveting moments from the bowlers where they made life tough for the batsmen, be it with speed or spin. And, it came as no surprise considering the firepower that was present in the tournament. The likes of Kagiso Rabada, Anrich Norje and Jasprit Bumrah led the pace department while Rashid Khan, Yuzvendra Chahal and Varun Chakravarthy ruled the roost as far as the spinners were concerned.

With the surfaces in the UAE also helping the bowlers, there were plenty of spells that left the viewers in awe. Here, we list out the top five individual performances of IPL 2020, not necessarily in that order. 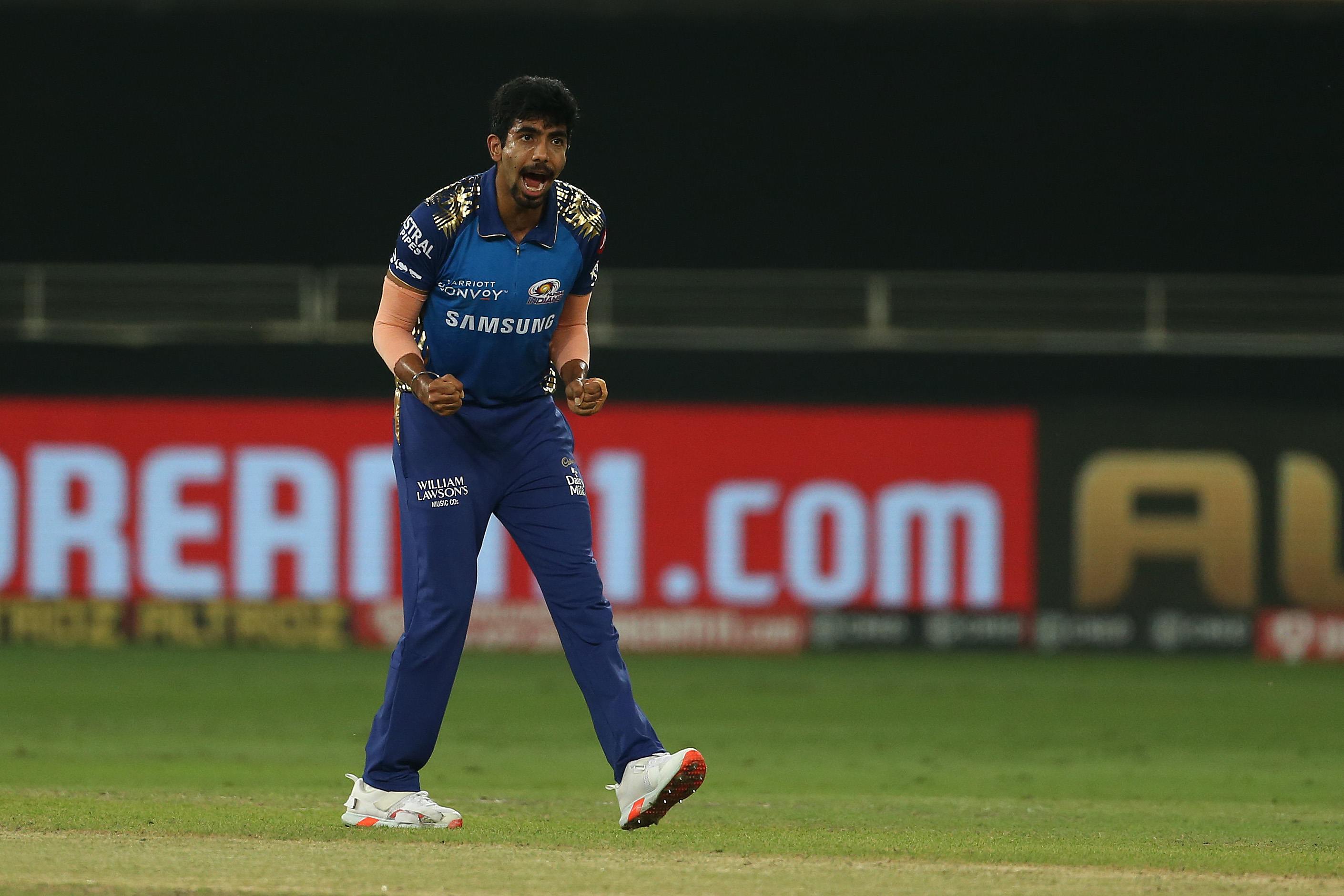 It’s almost like Bumrah always reserves his best for the crunch games. In Qualifier 1 of IPL 2020, Mumbai Indians (MI)  batted first and put up a strong 200/5 against Delhi Capitals (DC). Trent Boult then turned up striking twice in his first over. If Delhi thought the worst had passed, they were in for a rude awakening. Bumrah with his second ball sent down a thunderbolt of a yorker, one which Shikhar Dhawan did not have a clue about and his stumps were left in a mess. In his next over, it was Shreyas Iyer’s turn to depart before Bumrah got the better of Rishabh Pant and in his final over, Daniel Sams.

In all, Bumrah returned 4 wickets for 14 runs, but what was most impressive was the number of dot balls he bowled – 17, that is 2.5 overs. His economy rate of 3.5 was Bumrah’s personal best this season. What a day to turn up for your team! 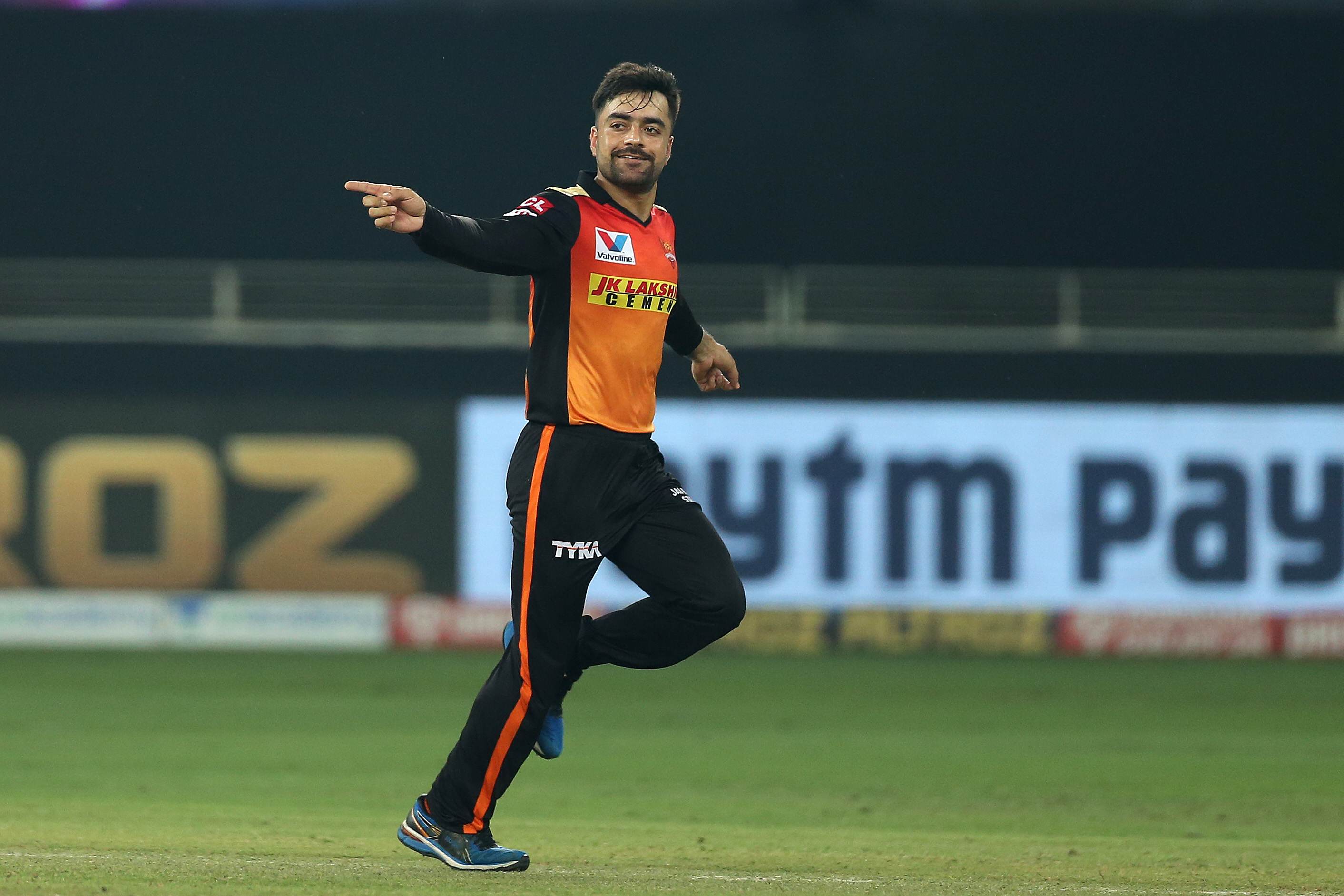 Imagine bowling four overs in a T20 match, conceding runs at only 1.75 runs an over and also picking three key wickets in the process. These are exemplary figures in a Test match let alone in a T20 game.

Rashid, in Match 47 of IPL 2020, had a night to remember. It was a game which Sunrisers Hyderabad (SRH) had to win to keep their chances of qualifying into the playoffs alive. They started on the right note, smoking 219/2 with Wriddhiman Saha and David Warner going berserk.

With the ball then, it was Rashid’s turn to take over and he owned the stage. The leg-spinner was brought into the attack in the seventh over and with his very first ball he left Shimron Hetmyer’s stumps in a mess. A mere four balls later he had Ajinkya Rahane trapped right in the front of the stumps. Rashid’s next two overs did not bring a wicket but both Iyer and Pant found him almost impossible to read with near plays and misses occurring every second ball. It was inevitable that Rashid would close out with another wicket and he did so with the penultimate ball of his spell getting rid of Axar Patel.

It was leg-spinning of the highest order from Rashid who bowled with guile flummoxing some of the best in the business. In all, Rashid bowled his 4 overs for just 7 runs, which included as many as 17 dot balls. 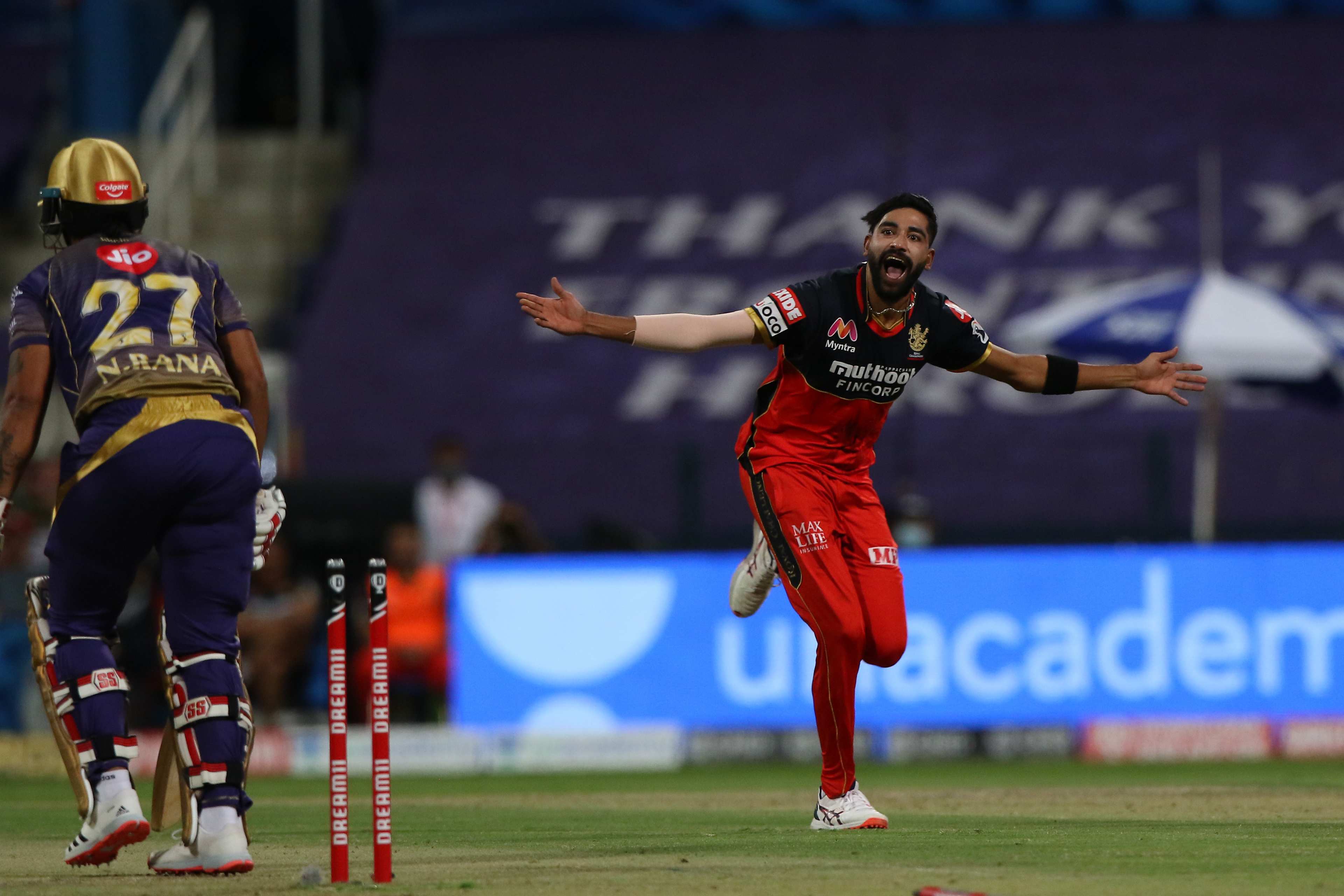 For the longest time, Mohammed Siraj has been subject to taunts on social media especially because of his death bowling. But Siraj’s prowess lies with the new ball and Kolkata Knight Riders (KKR) learnt about it the hard way in Match 39.

Abu Dhabi, this season was one venue where fast bowlers got some swing early on. Sensing this, Virat Kohli gave the new ball to Siraj and what a masterstroke it turned out to be. Although a natural out-swinger, the way Siraj got the ball to move into the right-handers was a treat to watch. With just the third ball of his spell, Siraj got the outside edge of Rahul Tripathi’s bat with AB de Villiers completing a simple catch behind the stumps. His very next ball brought about Nitish Rana’s downfall who played all around an in-swinger. That over ended up as a double-wicket maiden.

Siraj was not done yet as in his next over, he had Tom Banton caught behind for 10. His second over was also a maiden and Siraj became the first bowler to bowl two maiden overs in an IPL match. In all, Siraj went for just 8 runs of his 4 overs, bowled 16 dot balls and did not concede a single boundary. It was his effort that helped Royal Challengers Bangalore restrict KKR to 84/8! 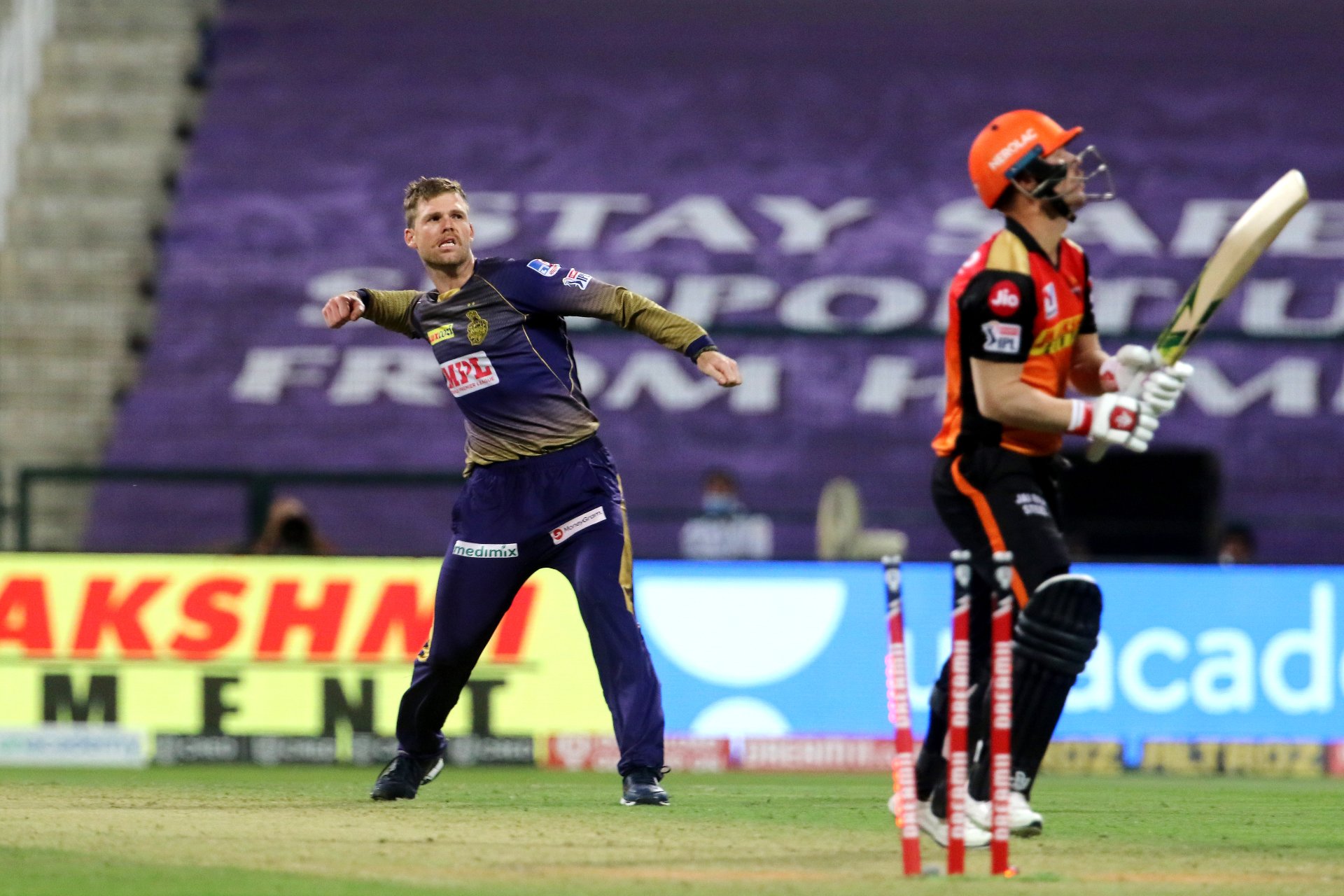 With the surfaces assisting pacers like the way they did in the UAE all season, it came as a bit of a surprise that KKR decided to unleash Lockie Ferguson as late as Match 35 of IPL 2020. He came in and immediately proved a point.

Ferguson had his yorkers on point, deceived the batsmen with his leg-cutters and got his rewards. Three wickets in regular time at an economy rate of 3.75 and two wickets in the Super Over that saw his team to victory.

Defending 164 against a strong SRH side, Kolkata knew they needed some sort of inspiration especially after Hyderabad had raced to 58/0 in 6 overs. Ferguson turned out to be the man. With his first ball of IPL 2020, he removed his national captain Kane Williamson for a 19-ball 29 to get Kolkata back into the game. In his next over, Ferguson had Priyam Garg squared up before a 148kph yorker shattered Manish Pandey’s stumps. With his team in a bit of a bother, Ferguson then returned to bowl the 18th over where he conceded only 7 runs. His spell of 4 overs went for just 15 runs and he was easily the most economical bowlers among both sides.

Ferguson’s task though wasn’t yet over. As it turned out, the match ended in a tie and the Kiwi was called upon to bowl the Super Over. Ferguson knocked over David Warner first ball of the Super Over and then castled Abdul Samad of his third delivery while conceding only 2 runs. Kolkata did not take much time to wrap up the match after this. 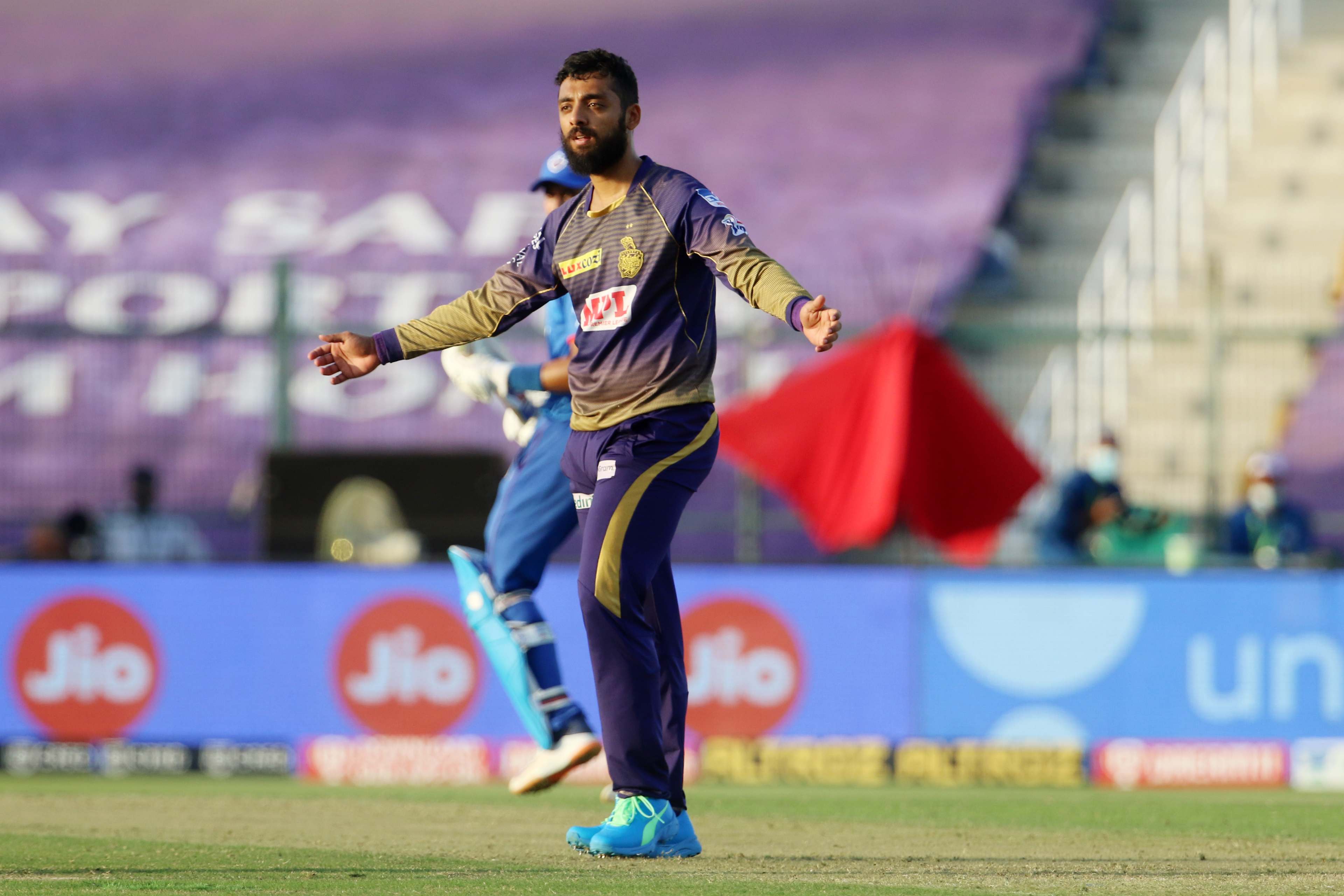 In a season which boasted the likes of Rabada, Bumrah and R Ashwin to name a few, it was uncanny that a little known architect-turned mystery spinner was the only bowler to pick a five-wicket haul. And he did so against a side which had some of the best players of spin in the tournament, DC.

Chakravarthy’s story from an architect to a cricketer is well documented but despite the big bucks in the auction, he did not have many wickets to show for. All that changed in Match 42.

Pat Cummins had done the early damage as he sent back openers Rahane and Dhawan inside the Powerplay. But Pant and Iyer threatened to get Delhi back into the game with a 63-run stand.

Enter Chakravarthy. With just his second ball he removed Pant, who in an attempt to clear the midwicket fence was caught on the ropes. In his next over, Chakravarthy struck twice in two balls removing Hetmyer and Iyer. He was still not done as in his third over, he sent back Marcus Stoinis and Axar Patel to become the first KKR bowler since 2012 to pick a five-wicket haul.