From Pakistan's multitude of problems to England's unwavering aggression 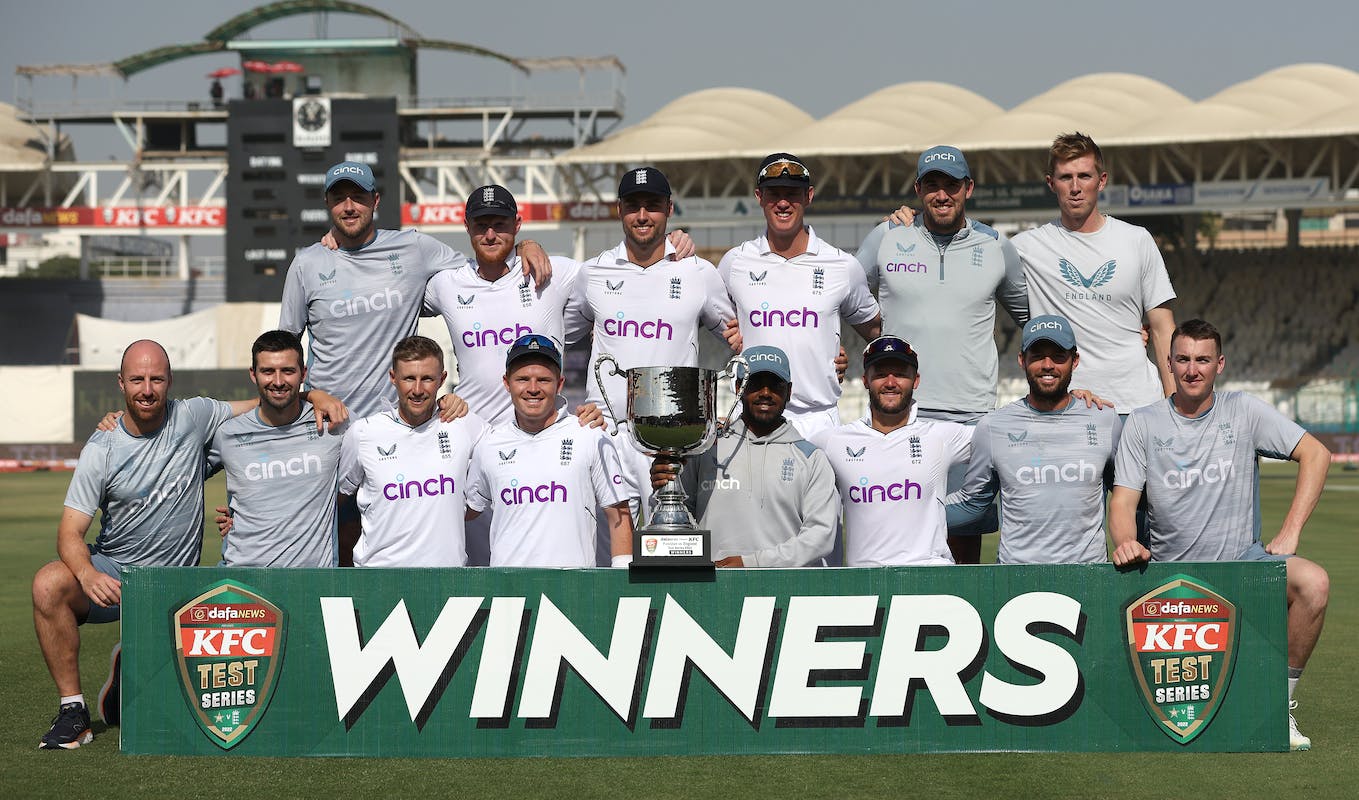 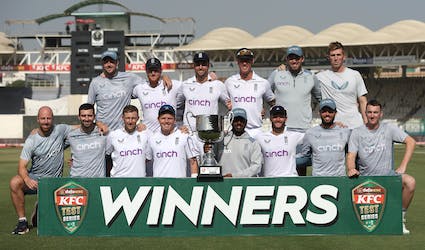 From Pakistan's multitude of problems to England's unwavering aggression

It’s an understatement to say that Pakistan’s Test cricket is going through its worst phase. They are yet to win a Test all year – two draws and a defeat to Australia followed by three straight losses to England. The 3-0 whitewash against England was their first ever in Tests at home and have now lost four Tests in a row for the first time ever. Babar Azam’s stint as the red-ball captain has surely lost its effectiveness and their fans and media will go after him. The Pakistan Cricket Board (PCB) is in a tough predicament as they were unable to provide good pitches after years of lobbying for other teams to tour their nation.

England, on the other hand, once again proved they are as formidable on placid sub-continental pitches as they were in seaming English surfaces. Their bowlers hunted in packs and their batting had enough firepower to totally outclass Pakistan. They did not have Jonny Bairstow and Stuart Broad for the series and claimed all 20 wickets in the final Test at Karachi without stalwart James Anderson. They have now won nine of their 10 Tests under Ben Stokes and Brendon McCullum and its difficult to predict what other records they will break when they play South Africa next year.

It has been a series to introspect and learn for the home team and an unforgettable one for the visitors. Here are some key observations: 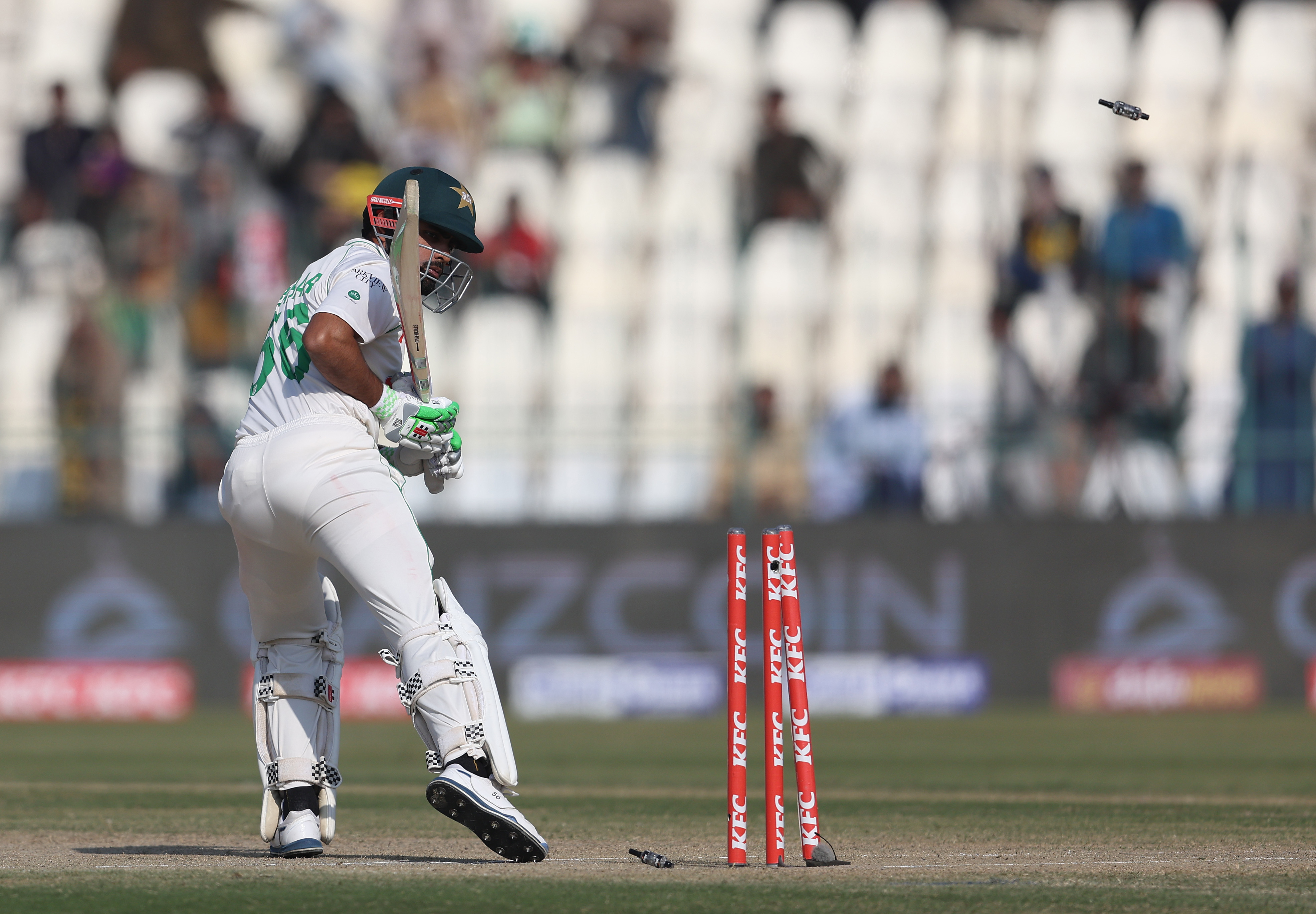 268 all out, 328 all out and 216 all out – these are Pakistan’s second innings totals in this series. While numerically there is nothing substantial about those, Pakistan’s collapses are. They lost their last five wickets for nine runs in Rawalpindi, 38 runs in Multan and 39 runs in Karachi. In the previous series against Australia, they also lost their final five wickets for just 22 runs in the lost Lahore Test. Besides Saud Shakeel's three consecutive fifties in the second innings, their top order snowballed regularly. Babar and Abdullah Shafique, their in-form batters, managed a combined tally of 136 runs in the second innings for this series.

Their middle order composition has varied vastly, but the pattern has remained the same. They have no effective batter at No.6 and No.7 who can compensate for the top order and protect the tail. Except for Mohammad Rizwan’s 104 not out against Australia in the draw at Karachi, none of the batters have scored a fifty besides Agha Salman. The 29-year old is new to the international scene, but it is difficult to see him retain his position in the team as a pure batter. Besides his two fifties in this series, he often failed to build partnerships while batting in these positions. With Azhar Ali calling it time on his international career, there might be promotions for others, but their lower-middle order is a chasm of problems that needs an overhaul.

If there is a silver lining for Pakistan in this series, it has to be leg spinner Abrar Ahmed. Cricket pundits were scratching their heads why the team management benched him for the Pindi Test and handed a debut to Zahid Mahmood who finished 4-235 in his debut innings and conceded runs at 7.12. Pakistan head coach Saqlain Mushtaq called it kudrat (fate) that Abrar didn’t get his chance. But as soon as he got his chance, Abrar became the hosts’ main weapon. The 23-year old finished as the top-wickettaker of this series with 17 scalps, which includes a 7-114 in his debut innings in Multan. Saqlain is now left to think the what-ifs of playing Abrar in the first Test where England had four centurions. 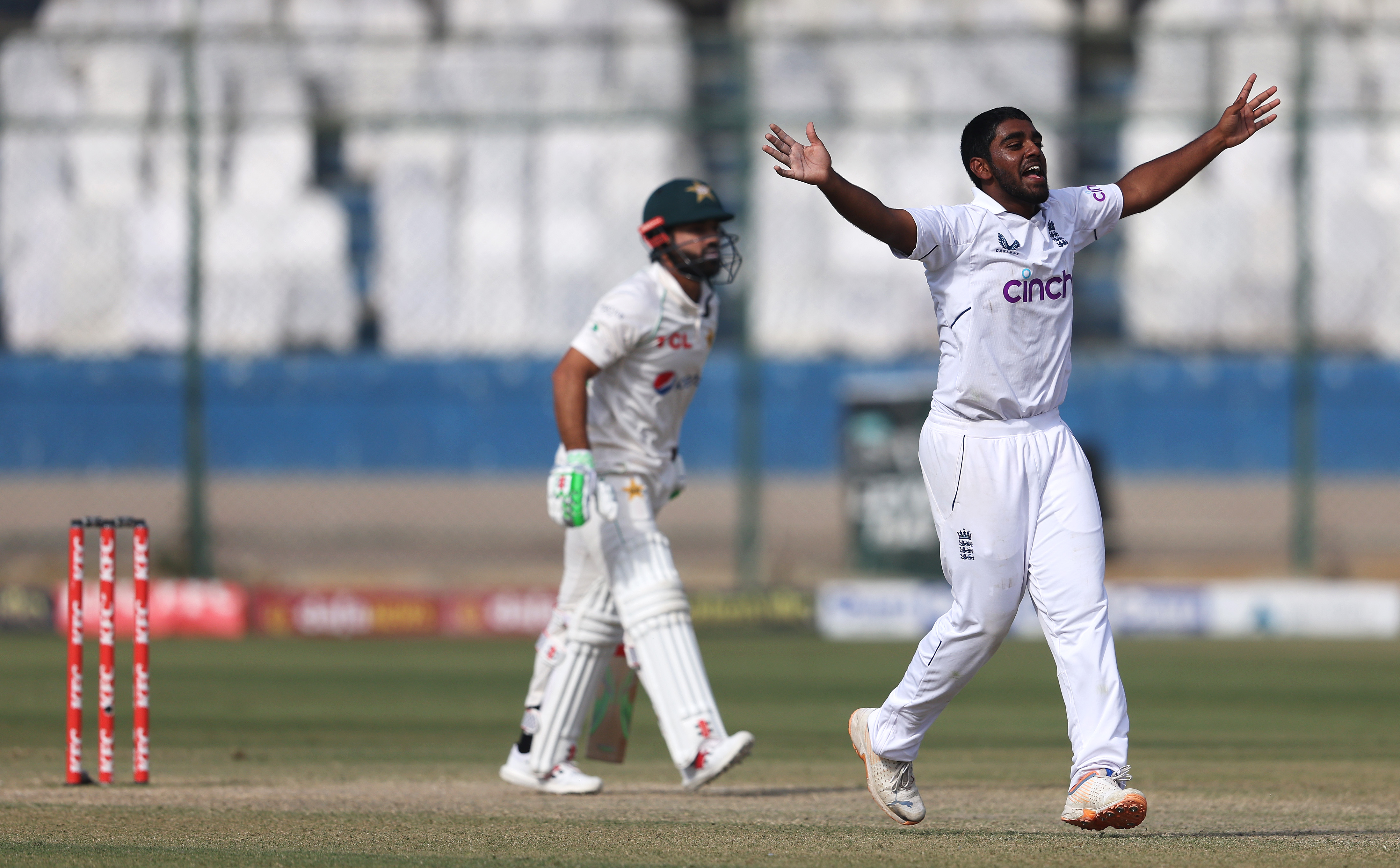 It seems like nothing can go wrong with Bazball. In a long list of right things done under the new leadership, they called up teenage legspinner Rehan Ahmed for the series. Rehan, son of a Pakistan-born allrounder, became England’s youngest men’s Test player at 18 years and 125 days when he replaced Will Jacks in the Karachi Test.

The youngster’s early jitters were evident as he bowled some loose balls in his 2-89 in the first innings and had fumbled few stops while fielding. Stokes deserves all credit for holding back Rehan until lunch on the third day. He threw the ball to the teenager at the right time and Pakistan were unable to contain him. His 5-48 included the wickets of Babar and Saud Shakeel, Pakistan’s best batters in the match. For long, England have struggled with finding a quality second spinner when touring sub-continent and Rehan’s arrival might just be the answer.

Where are Pakistan’s pace reserves?

With Shaheen Afridi injured in the T20 World Cup final, Pakistan thought they did the right thing to hand a Test debut to Haris Rauf. Unfortunately, his debut lasted for 13 overs and 34 uncomfortable balls as a batter in both innings as he suffered a freak thigh injury while fielding. Adding to their woes, teenage pace sensation Naseem Shah was out with a shoulder injury. In the remaining two  Tests, Pakistan’s fabled pace department looked out of depth and ideas. Mohammad Ali, Faheem Ashraf and Mohammad Wasim Jr managed to get a single wicket across four innings while conceding at nearly 5 RPO. 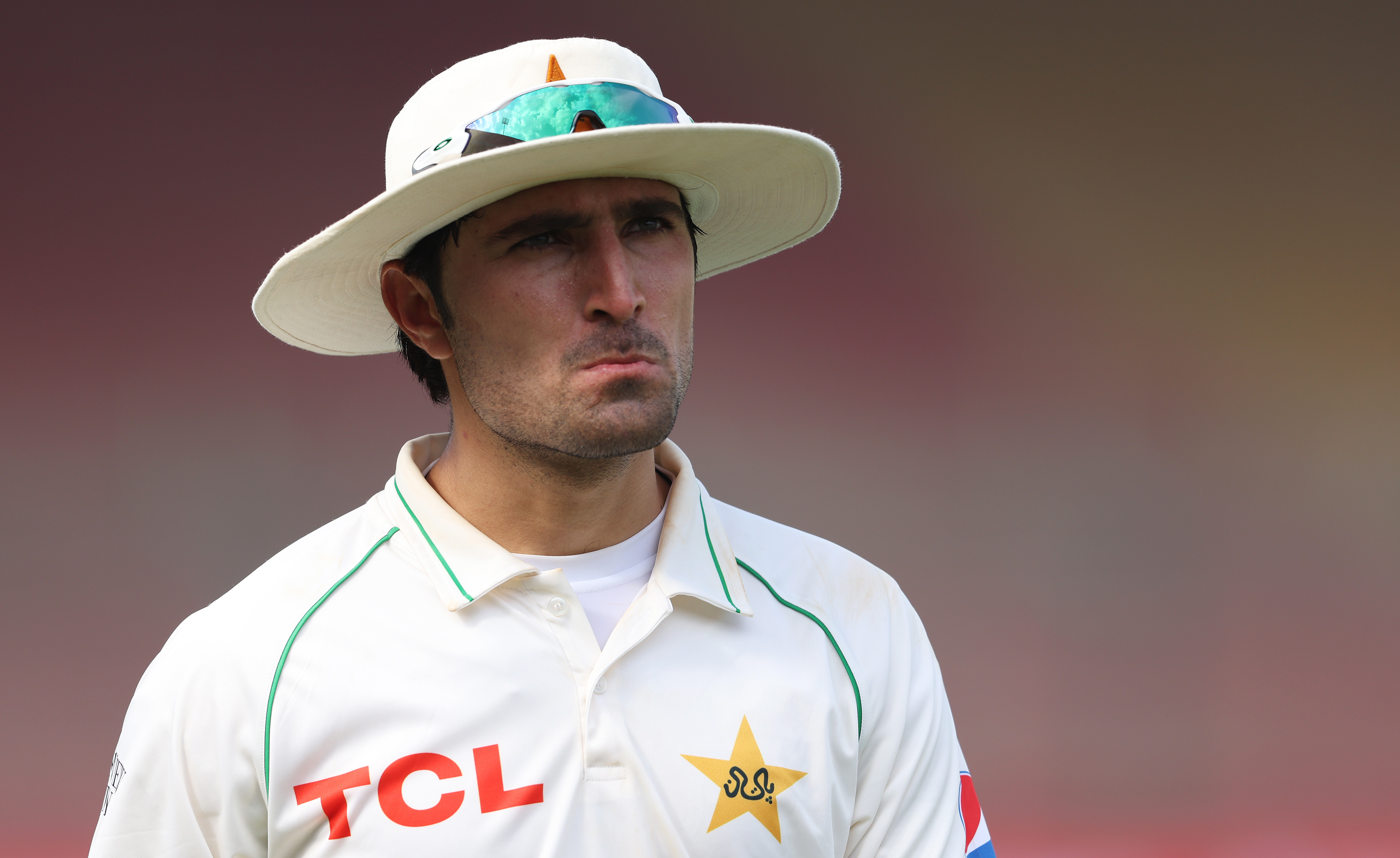 In the same time, England have made use of Mark Wood, Ollie Robinson and James Anderson (at Multan) and snared 15 wickets on dead tracks. While the visiting pacers were used in short bursts, there was a discipline and purpose to their spells. Pakistan, who had only fast bowlers to make up numbers, failed miserably. It’s a tough pill to swallow for the hosts, who have historically produced an unending line of fast bowlers, but looked stripped to the bone by the absence of three.

Have Pakistan forgotten to play spin?

Over the years, Pakistan, along with India and Sri Lanka, have produced some of the best players of spin bowling. Mohammad Yousuf, Shoaib Malik, Younis Khan, Inzamam-ul-Haq, Mohammad Hafeez are a small list of Pakistani batters who have dominated spinners in the sub-continent. In this series, it’s not just the England batters who have bucked the trend, but Pakistan batters have regressed.

England were nimble on their feet and used the sweep, reverse sweep, paddle, scoop and the inside-out loft to a great effect. Though they have lost 16 wickets against spinners while attempting these shots, they have plundered 330 runs in the process. Zak Crawley, Ben Duckett, Harry Brook, Ollie Pope, Ben Stokes repeatedly got to the pitch of the ball and scored freely. 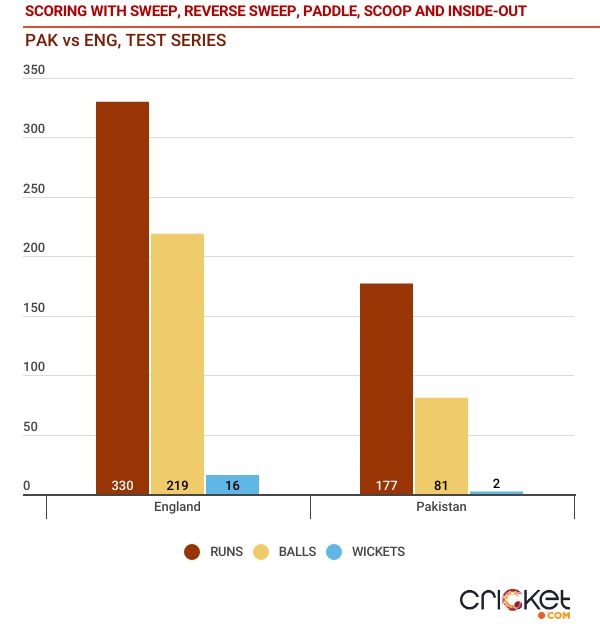 On the other hand, Pakistan batters barely attempted these shots which resulted in just 177 runs across six innings. While there is an argument that Pakistan avoided risky strokes and lost only two wickets to these shots, most of their batters remained flat footed on turning tracks. A total of 38 wickets off the total 60 wickets fell to England's spinners. The prime example being Abdullah Shafique’s copy+paste dismissals in the third Test against Jack Leach’s straight delivery. Twice, the opener failed to play across the line and was trapped leg before. If Pakistan are to do well against New Zealand next, playing spin is another area of concern.