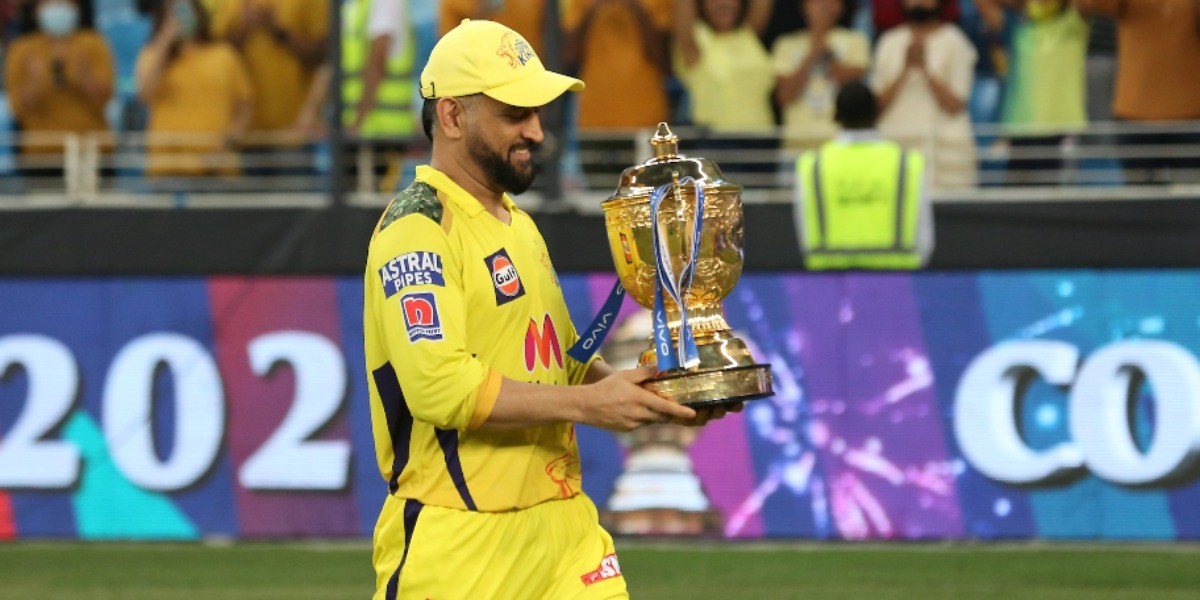 The vibes of this edition’s Final weren’t different from the 2012 edition between Chennai Super Kings and Kolkata Knight Riders, at least till the first half of the second innings. Similar target (191 in 2012 and 193 in 2021), similar situation till the first 10 overs of the second innings (100/1 in 2012, 88/0 in 2021), everything was in order. However, unlike the 2012 Final, Kolkata middle order collapsed like a house of cards to deny them a win and hand Chennai their fourth IPL title.

After being sent into bat first, Chennai’s dependable duo of Ruturaj Gaikwad and Faf du Plessis set the perfect platform with a 61-run opening stand. Robin Uthappa, who came in at number three on the back of a sensational half-century, blasted his way through with a 15-ball 31 before his dismissal. The finishing touch was laid by the duo of Moeen Ali and du Plessis with another 68-run partnership. All the three wickets saw 60+ runs partnership and witnessed Chennai post 192/3.

In reply, a dropped catch by MS Dhoni in the second over of the innings saw Venkatesh Iyer and Shubman Gill take flight with a 91-run partnership. But, what followed later has been the story of Kolkata in this season. None of their batsmen from 3-6 scored over 10 runs. A few lusty blows from Shivam Mavi and Lockie Ferguson in the end saw Kolkata post 165/9. Hence, handing a win for Chennai by 27 runs and their fourth IPL title. Here are a few notable stats from the Final of IPL 2021:

In the summit clash of the Indian Premier League 2021, as MS Dhoni walked out for the all-important toss, it was the 300th time he has led any side in the shortest format of the game. Over the years, Dhoni has been at the helm of affairs for various sides in the shortest form of the game, including the national team and the Chennai Super Kings, since the inception of the IPL and T20 internationals. The 40-year old is leading the table with most matches as a captain across T20s, with Daren Sammy second on the list with 208 games, followed by Virat Kohli's 185 matches. 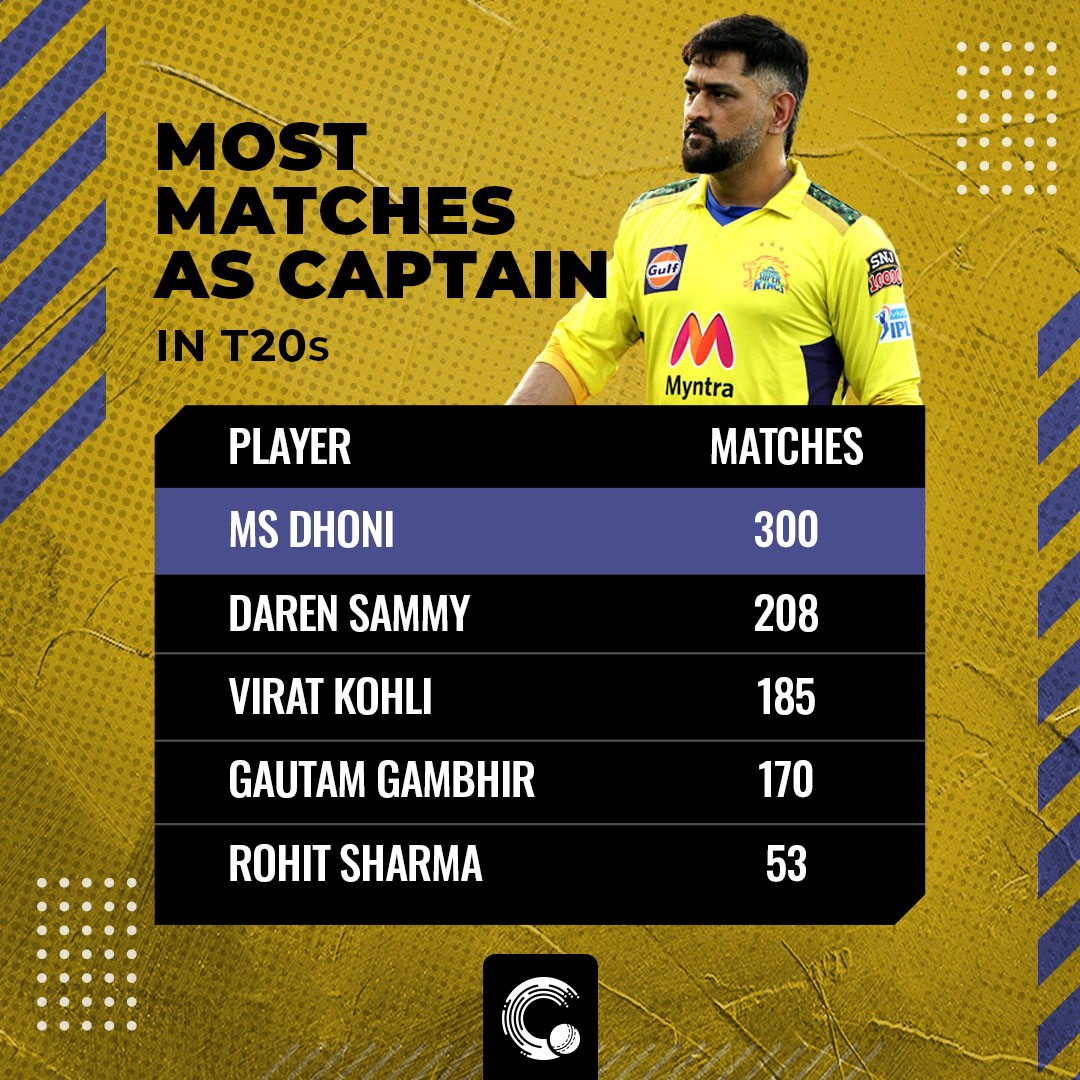 A solid opening partnership of 61 runs between Gaikwad and du Plessis allowed Uthappa to play a fearless brand of cricket and take the attack to the opposition. The right-handed batter smashed 31 off 15 deliveries at a strike rate of 206.7, studded with three massive hits over the fence, making it the third-highest strike rate in an innings of the final (minimum of 30 runs scored). Ben Cutting is on top of the table for his heroics of an unbeaten knock of 39 in 15 balls at a strike rate of 260 for the Sunrisers Hyderabad against Royal Challengers Bangalore in 2016. 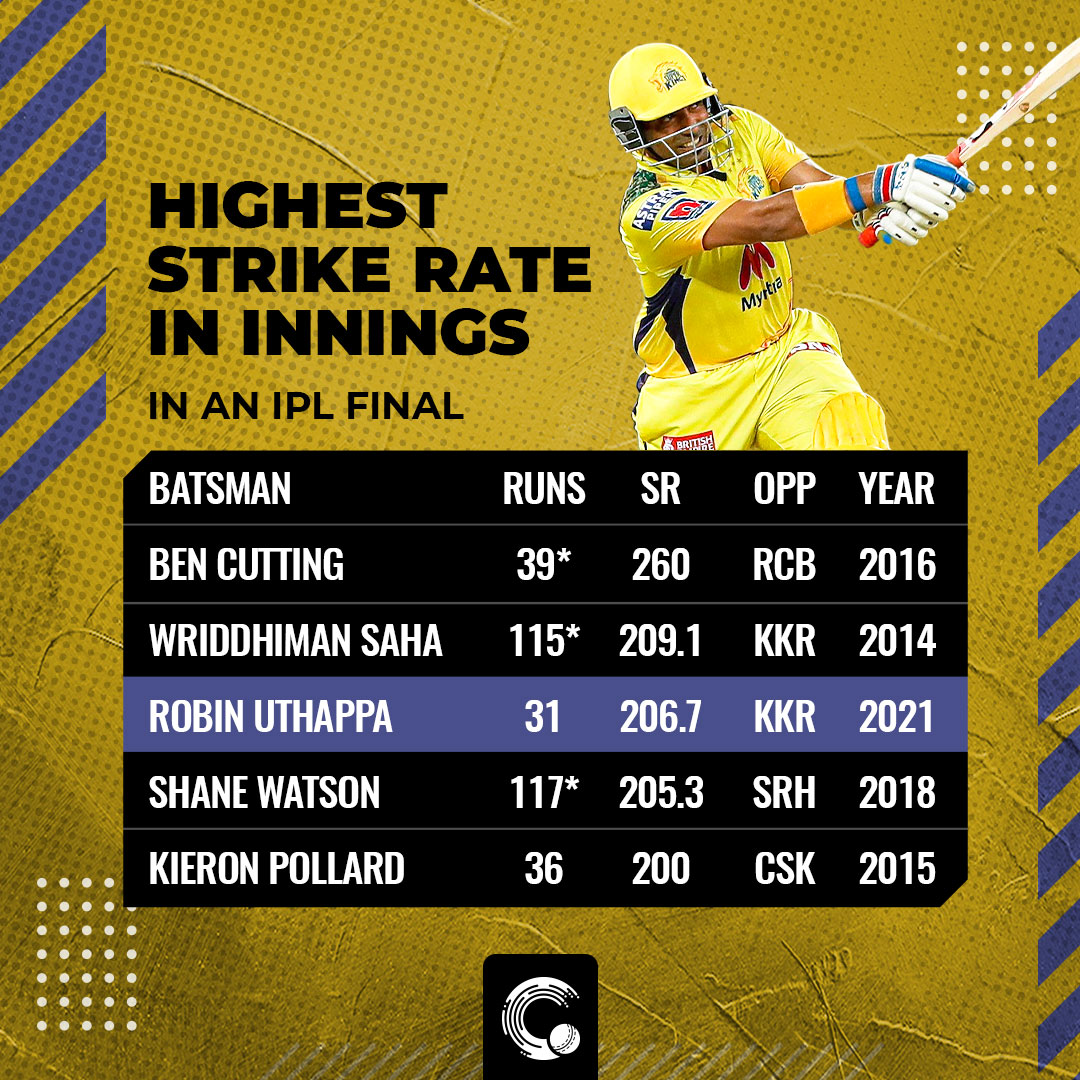 With the wicket conducive for batting, the onus of Kolkata bowling unit relied heavily on the overseas duo of Sunil Narine and Lockie Ferguson. While the mystery spinner had a decent outing and returned with figures of 2/26 in his four overs, Ferguson endured a tough night with the ball. The fast bowler failed to consistently bowl a nagging length and leaked 56 runs for no wickets in his quota of four overs, which is the second-highest runs conceded by a bowler in an IPL final. Shane Watson gave 61 runs against Sunrisers Hyderabad in the 2016 edition when playing for Royal Challengers Bangalore, which is the most by any player in the history of the league. 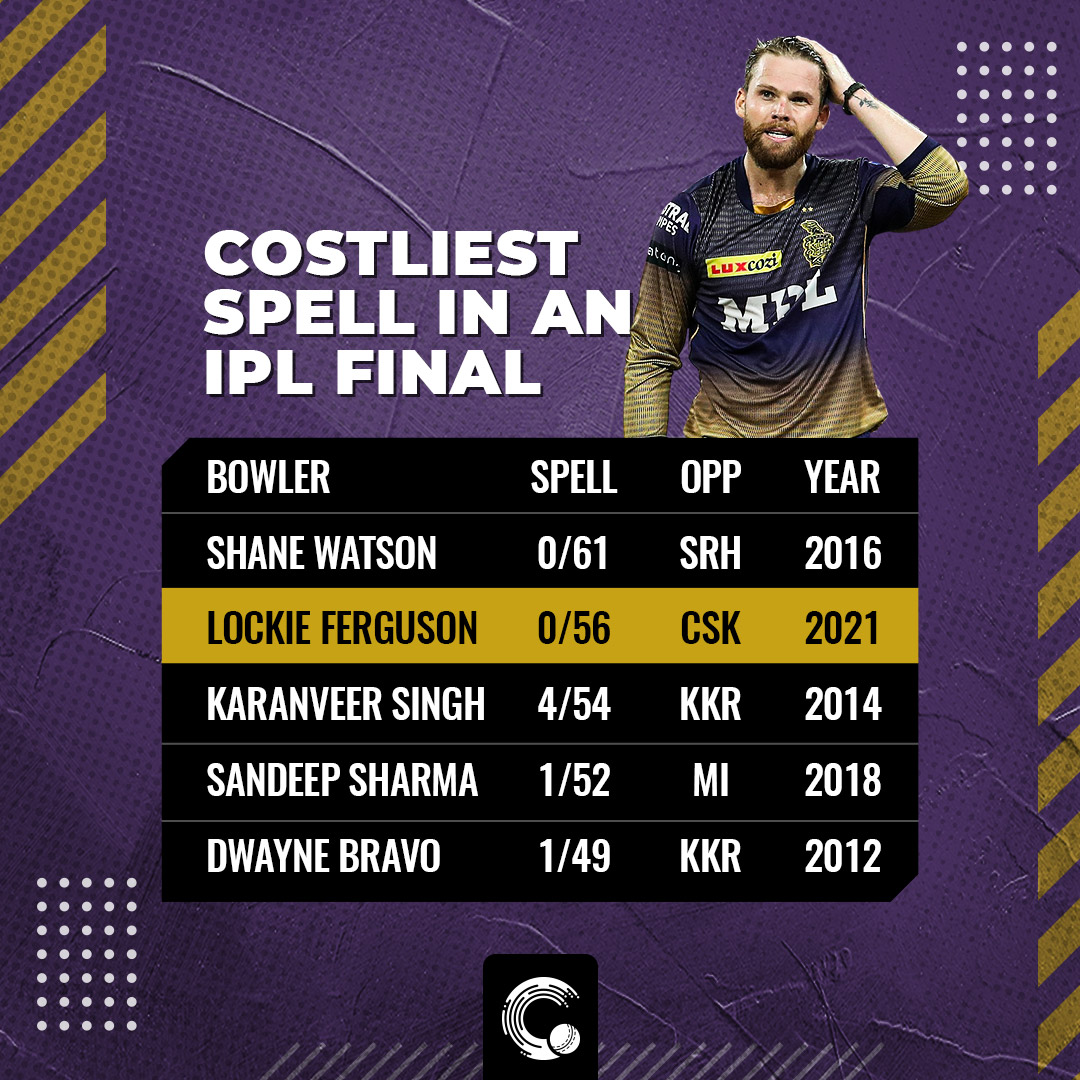 One of the standout performers for Chennai in this edition of the tournament has been the young batting sensation Gaikwad. With 635 runs in 16 innings at an average of 45.4 and a strike rate of 136.3, the right-handed batter is the leading run-scorer for the competition, making him the youngest recipient of the Orange Cap. Gaikwad achieved this feat at the age of 24 years and 257 days, going past Shaun Marsh's record of 24 years and 328 days in the inaugural edition of the league for Punjab Kings (Kings XI Punjab then). 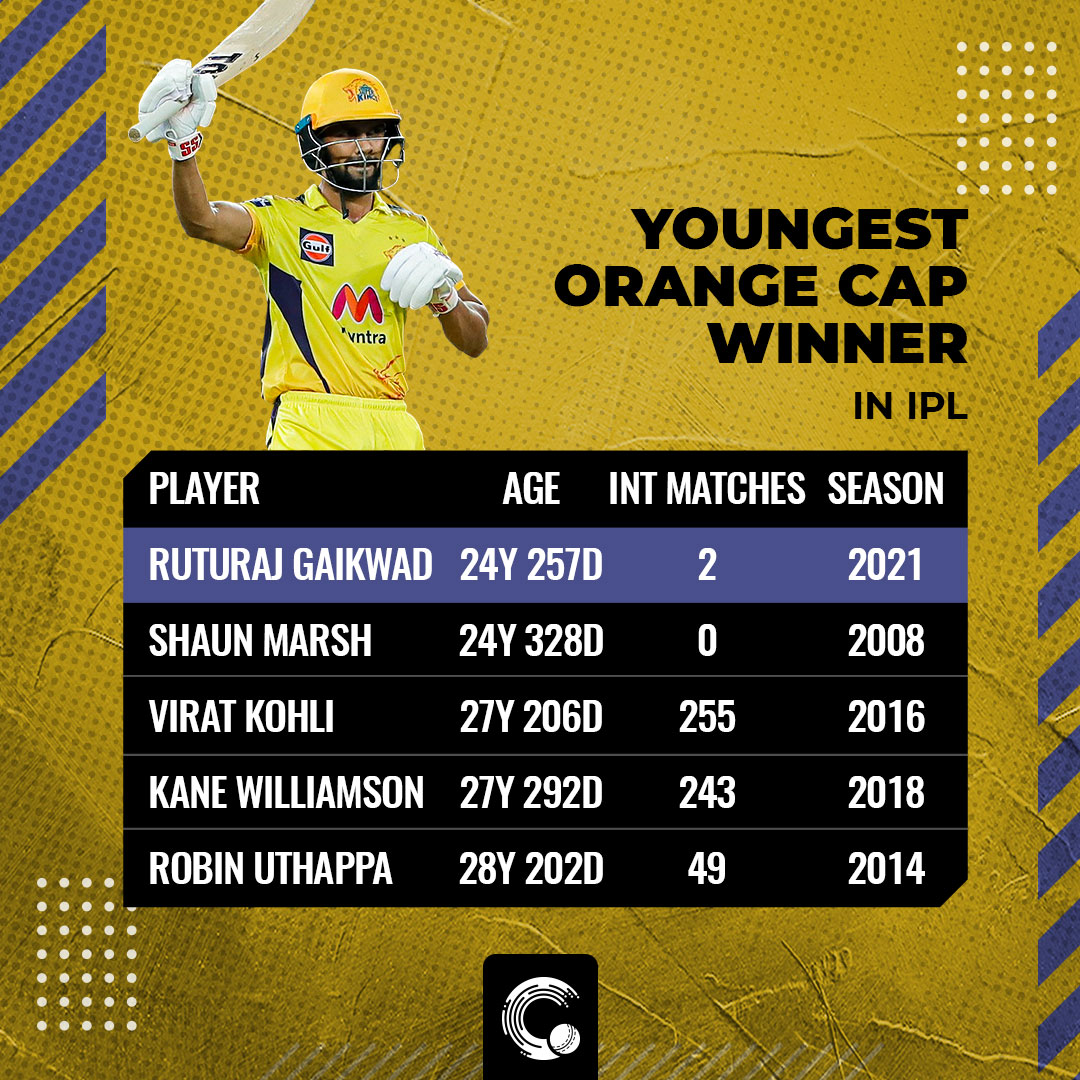 One of the biggest loopholes in Chennai’s early exit in the IPL 2020 edition was their biggest strength in their title winning campaign. The highest opening partnership for Chennai in the last edition was between Shane Watson and du Plessis, which was just 234 runs. However, the pair of Gaikwad and du Plessis in this season, posted 756 runs for the first wicket. In the history of IPL, only one opening pair has posted more runs than them and that was Warner and Bairstow in 2019 (791). 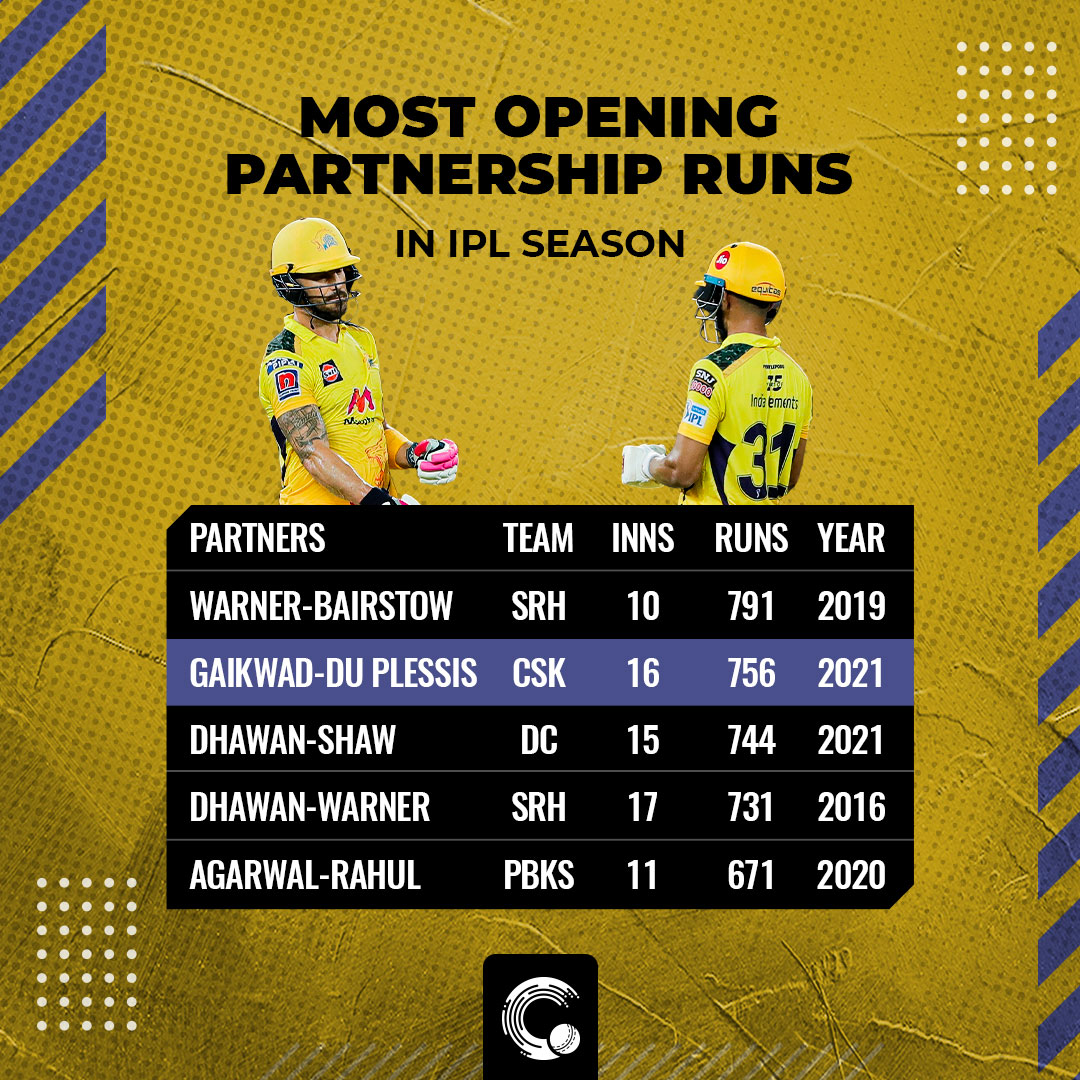 In addition, the duo had posted seven 50+ partnerships, which is the joint most for a pair in a season of IPL. Kohli and AB de Villiers in 2016 and Warner and Bairstow in 2019 also had seven.

Race to the Orange Cap ends with two-run deficit

In the IPL, the race for the Orange Cap has been one of the most fiercely contested accolades. Heading into this match, Gaikwad and du Plessis were the front runners to snatch it from KL Rahul (626). Gaikwad was the closest with 603 runs and rightfully he went past Rahul and ended up with 635 runs. On the other hand, du Plessis came all the way from 547 runs and had the chance to pip past his teammate. But, all he could do was fall short by two runs. The first three contenders were separated by less than 10 runs. The two-run difference between Gaikwad and du Plessis is the least difference between the top run scorers in a season of IPL. 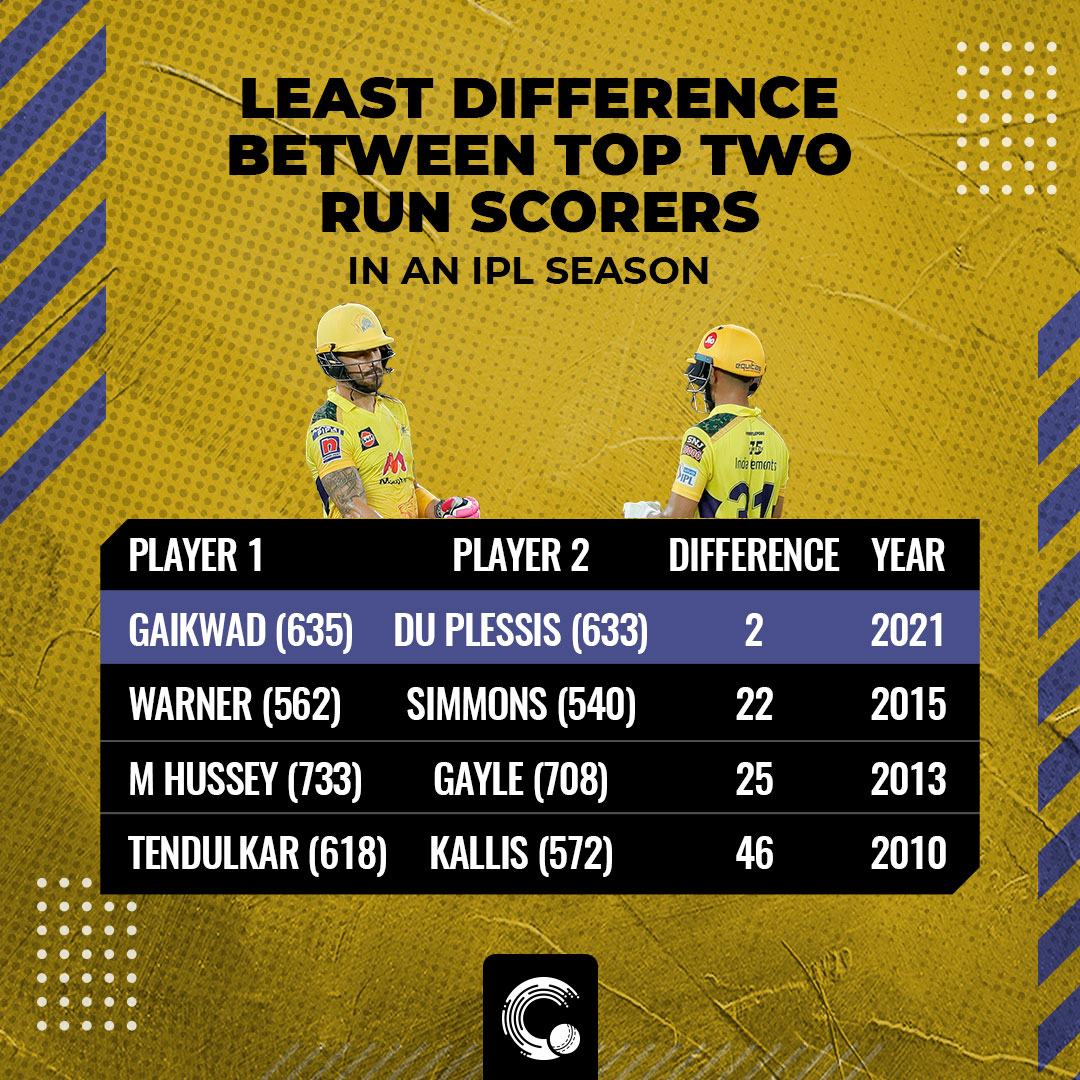 In addition, this was only the second season where the top two run scorers were from the same team. In IPL 2011, Chris Gayle (608) and Virat Kohli (557) were at the top two for Bangalore and overall. Also, Gaikwad became the second batsman after Uthappa in 2014 for Kolkata in IPL to don the Orange Cap and end up as the winners of the tournament.

Chennai’s batting mantra behind their victories 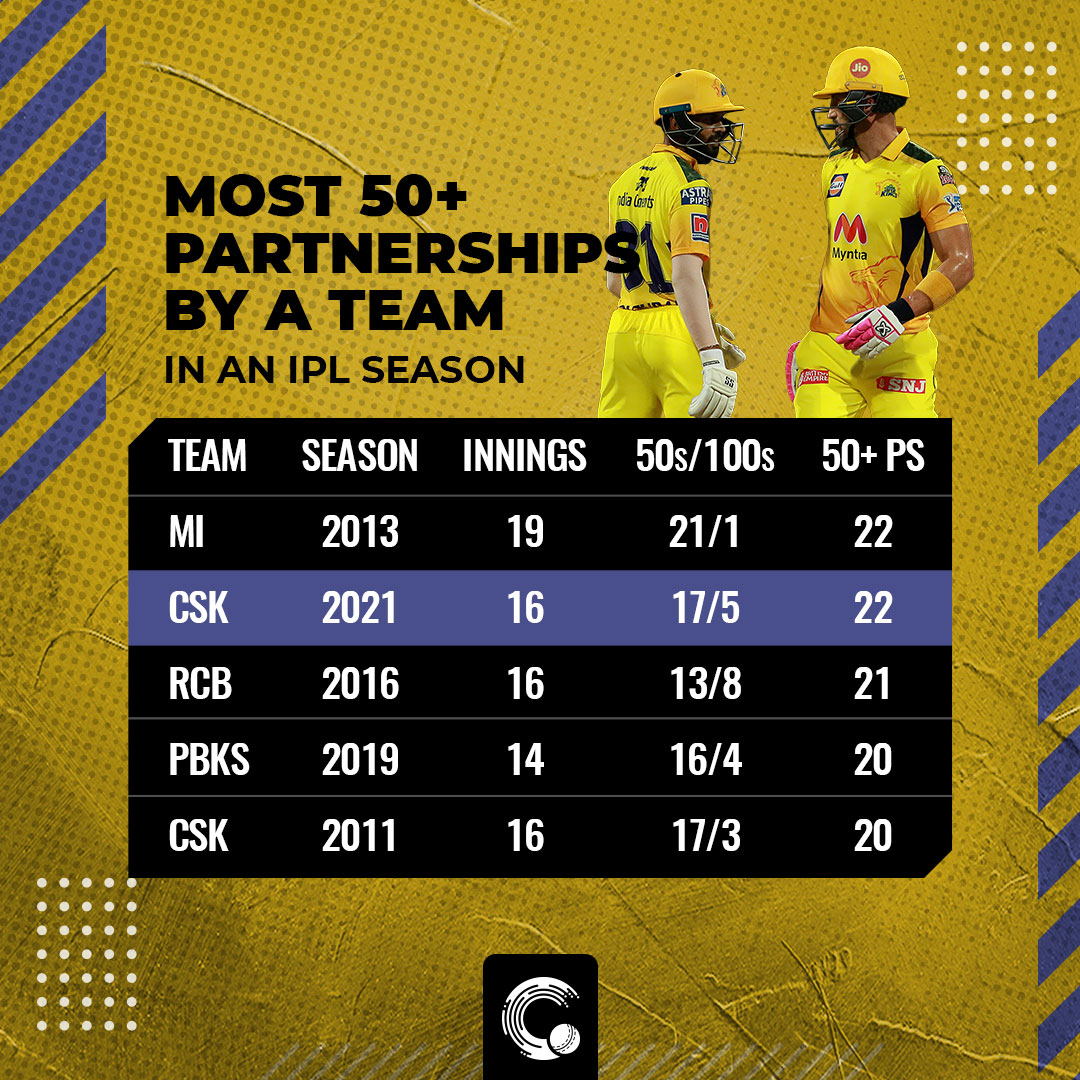 A gun fielder, an accurate and a dependable bowler and a fearsome striker, Jadeja’s perks as a player. It has been one of those seasons where Jadeja has been everywhere. With 227 runs at a strike rate of 145.5, 13 wickets at an economy of 7.1 and the cherry on top, 13 catches. A dream all-rounders season to be precise. He joined an elite list of all-rounders to score 200+ runs, pick up 10+ wickets and involve in 10+ catches in a season of IPL. 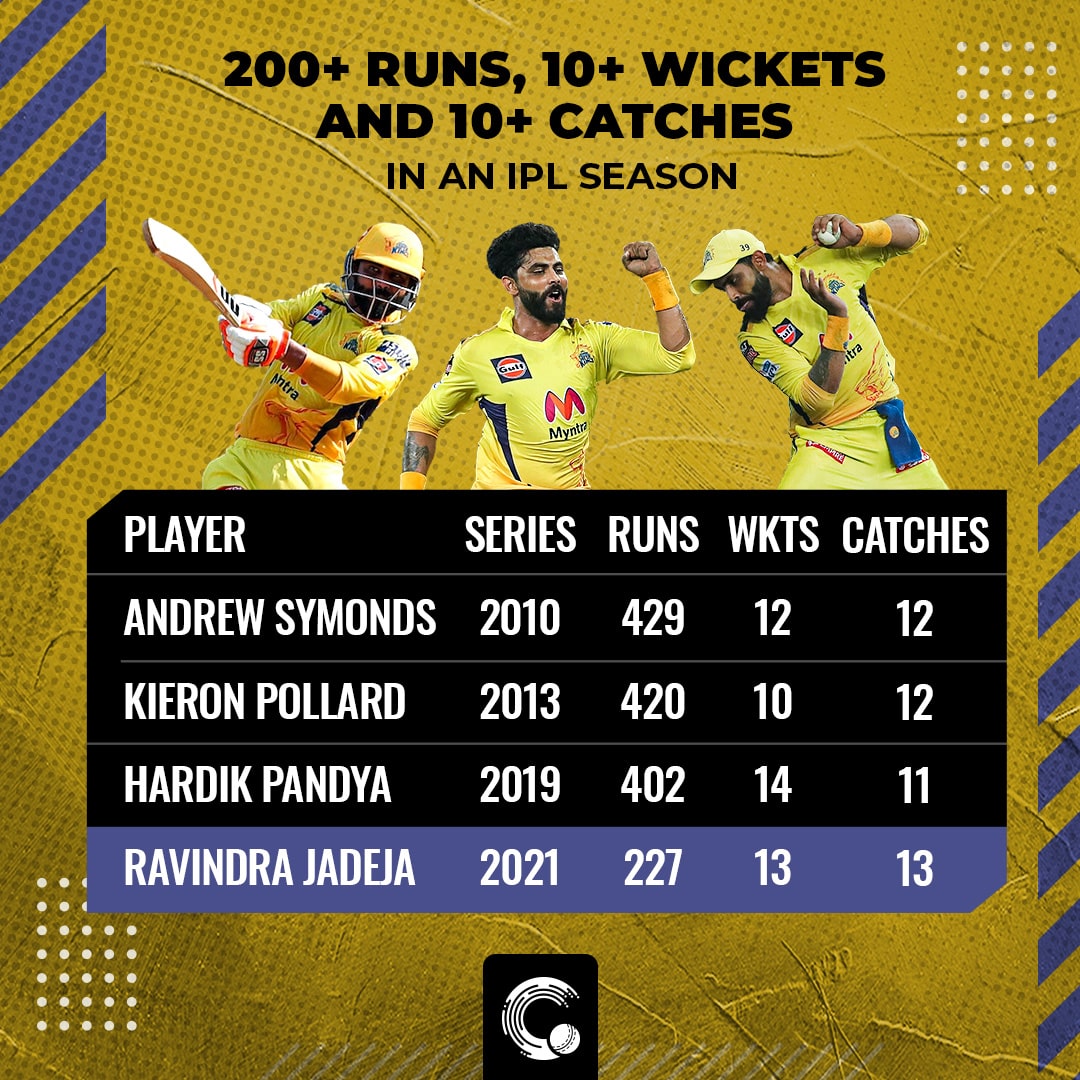 A valuable opening partnership in vain

Chasing 193, Kolkata were off to an absolute flyer as Gill and Iyer posted 91-run opening partnership. Iyer once again was the aggressor with a half-century of 31 balls. The pair had posted those runs at a run rate of 8.5 before Iyer was dismissed. However, it went in vain. Their opening partnership of 91 is the third highest in an IPL Final. Michael Hussey and Murali Vijay in 2011 Final against Bangalore had posted 159 runs and Kohli and Gayle in 2016 had posted 114 against Hyderabad.