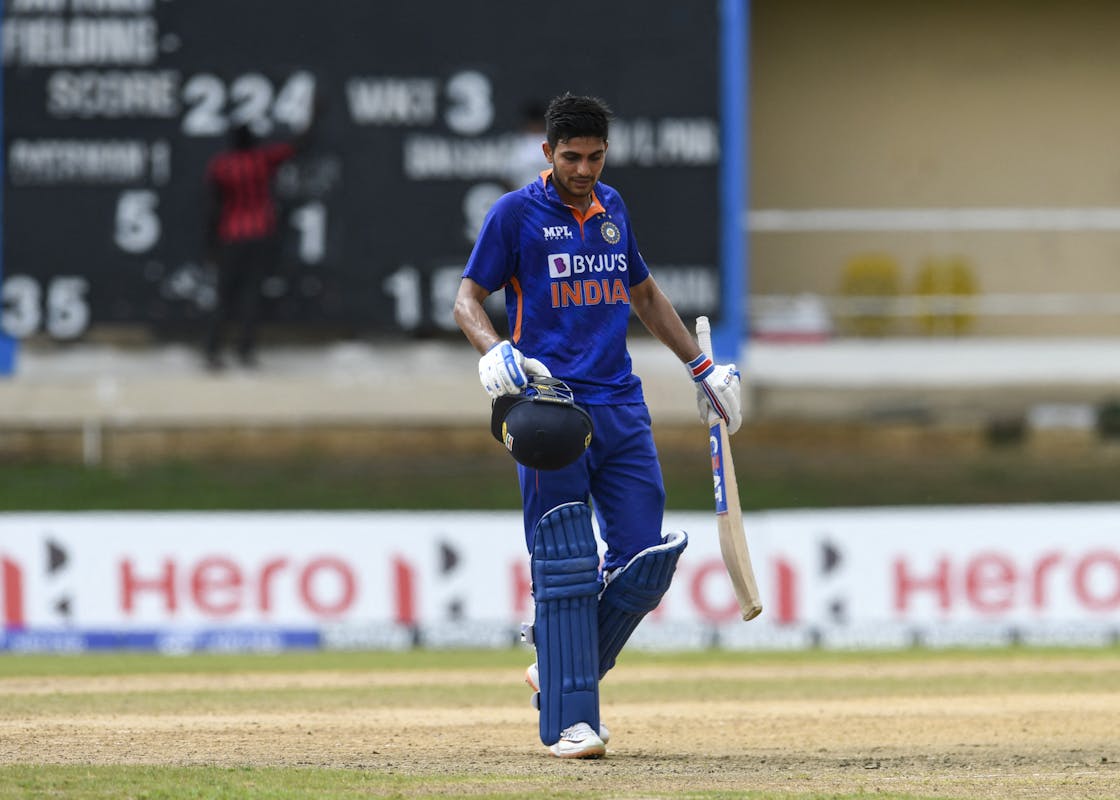 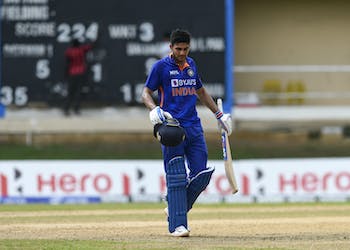 After Dhawan and Gill set up a solid base, Mohammed Siraj pushed the Windies to a corner to help India come out on the top

It could have been Shubman Gill raising his bat to celebrate his first ODI century but rain played spoilsport in his party to ensure he remained unbeaten on 98. However, it was an important component for India to outclass West Indies by 119 runs and complete a 3-0 rout in the ODI series in Trinidad. India scored 225 for 3 in 36 overs, courtesy Gill's career-best knock and another half-century from skipper Shikhar Dhawan (58 off 74 balls).

The revised DLS target of 257 from 35 overs was a tricky one and Mohammed Siraj's (2/14 in 3 overs) near-perfect first over with the new ball set the tone as West Indies could finally manage only 137 in 26 overs.

Spinners Yuzvendra Chahal (4/17 in 4 overs), Axar Patel (1/38 in 6 overs) and seamer Shardul Thakur (2/17 in 5 overs) also performed their role admirably on a slowish surface as Brandon King (42 off 37 balls) and Nicholas Pooran (42 off 32 balls)'s counter-attacking resistance was never going to be good enough.

While all the three ODIs were played at the same venue, Dhawan and his men deserve full credit for making most of the opportunities, showing good game awareness in crunch situations throughout the series.

If they defended well under pressure in the first game, the second one saw the lower middle-order accomplish a tricky chase after a not-so-great show from top-order. The third game posed a different challenge as rain-break could have caused a decisive shift in momentum but the stylish Gill and the talented Shreyas Iyer (44 off 34 balls) changed the complexion of the game post rain-break.

India were 115 for 1 in 24 overs when there was the first stoppage but once the play resumed, visitors suddenly upped the ante, smashing 110 runs in the next 12 overs as Gill looked good for his maiden ton, which was not to be. However, Gill would have little complaints having scored 205 runs in three games with scores of 64, 43 and 98 not out.

While world over, bilateral ODI contests are fighting for context in their bid to remain relevant, Gill would be indebted to this series, which has now given him a breathing space in the 50-over format. Both Gill and his skipper Dhawan, who plays only the ODI format, have done more than enough to keep themselves firmly in the mix even when the 'Big Boys' are back in the ODI set-up.

The disappointment was writ large on Gill's face when it started drizzling for the second time and he would curse himself for not speeding things up after entering the nervous 90's. Gill batted in two different gears during the course of the innings. Before the rain-break, he was more of an accumulator while he scythed through the Caribbean attack once play resumed before once again tapering off towards the landmark.

Nonetheless, no one can take the credit away from what has been a sublime knock and his stand out shots will be -- two sixes off leg-spinner Hayden Walsh and a picture perfect off-drive off pacer Jayden Seals' bowling.

Skipper Dhawan, who has been India's highest run-getter in the format during last two years, showed why he is still indispensable in this format. Dhawan and Gill added 113 for the opening stand, their second hundred plus partnership in the series, with the left hander notching up his second half-century (58 off 74 balls) following his 97 in the opening game.

Siraj's ability to extract movement in the air and off the pitch did the trick as he removed Kyle Mayers (0) and Shamarh Brooks (0) in a space of three deliveries. In case of left-handed Mayers, it was a perfectly full outswinger (inswinger for the batter) that tailed in and went through his defence. Right-handed batter Brooks got an off-cutter that was pitched slightly short of length but jagged back sharply to find the batter plumb in-front.

In a chase of 257 in 36 overs, the scorecard reading 0 for 2 is always bad omen and West Indies never recovered from that setback. The normally consistent Shai Hope (22) was stumped by Sanju Samson off Chahal's bowling, while King after some breathtaking shots was beaten by an arm-ball from Patel.

The match was over by then but the resistance completely ended when Prasidh Krishna forced Pooran to go for a pull to a delivery that was fast and bouncy. The resultant catch was gleefully accepted by Dhawan as West Indies fizzled out without a fight.