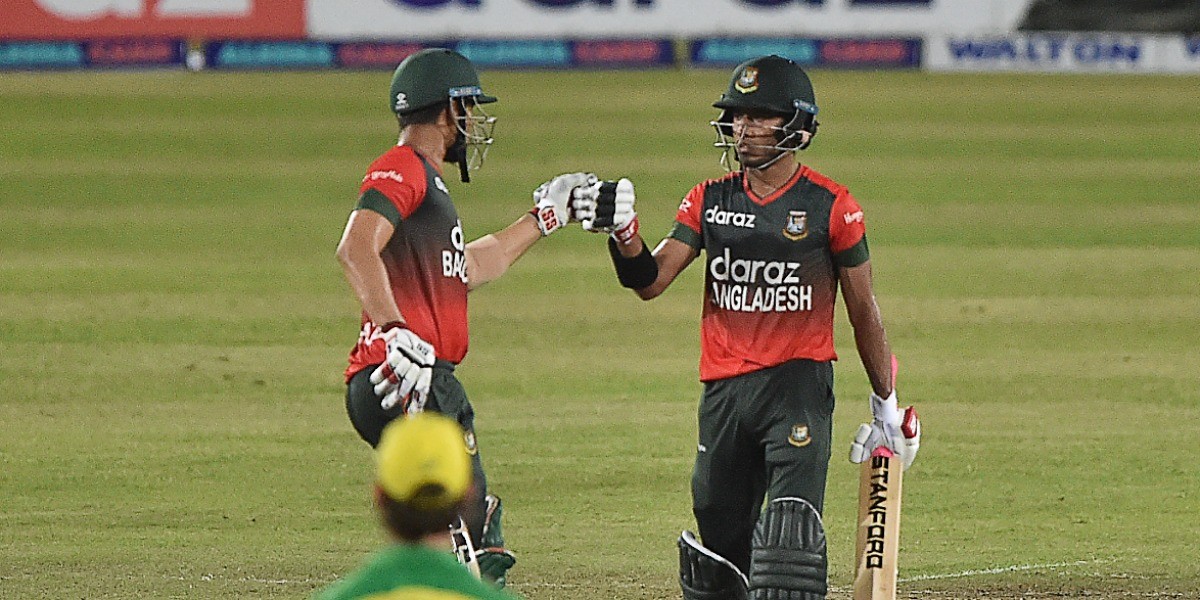 A judicious stand of unbeaten 56 between Afif Hossain and Nurul Hasan steered Bangladesh from adversity to a 2-0 lead over Australia with a five-wicket win.

Chasing 122 for victory, Bangladesh were limited to 67 for five at one stage. They lost three wickets for 9 runs which included the scalps of the experienced pros in Shakib Al Hasan and Mahmudullah as Australia believed they could pull things back. At this important juncture, Afif and Nurul showed impeccable sense of calmness while finding occasional boundaries to achieve their target with eight balls to spare in Dhaka. Afif was adjudged Player of the Match for his unbeaten 37 while Nurul was 22 not out.

In other contributions, Shakib Al Hasan made 26 and Mahedi Hasan, promoted to number four, scored 23.

Pace bowler Mustafizur Rahman took three wickets to restrict Australia to 121-7 despite 45 by Mitchell Marsh, who got the same score as he did in the first T20I - 45.

"It's very pleasing to see Afif and 'Sohan' stand up, carry us to the end. Showed maturity," skipper Mahmudullah Riyad said after the win. "And up front our bowlers did very well to restrict them to 120. But Shakib was very important with bowling and batting, shows how important he is to the team."

Shakib, in at three, counter attacked straightaway with three successive boundaries to begin his innings. Two of them came through well timed shots in the on-side while the third was produced with a genuine edge past the wicketkeeper. He added 37 for the third wicket with Mahedi to absorb the early jitters. Mahedi, on the other hand, lived a charm life. He was sent up to accelerate and played a number of mistimed shots in the air, none of which found the fielder. It was going fine until the medium-pacer Andrew Tye bowled Shakib and Mahmudullah dragged the ball from left-arm spinner Ashton Agar onto his stumps.

But the 21-year-old Afif showed composure to neutralize the opposition bowling along with Hasan and take the team home.

Australia came agonizingly close to get rid of Afif early when Marsh wrapped him on the pads in the ninth over. The umpire ruled him out but the left-hander used DRS to great effect. The ball tracker showed the ball to be pitching marginally outside the leg-stump as Afif survived. He was on 1 at that point and it turned out to be a big moment in the game.

Earlier the tourists, who lost the opener after being bowled out for 108 in their chase of 131, collapsed from 99-3 to 106-7 after Marsh's wicket. Marsh put on 57 for the third wicket with Moises Henriques, who scored 30, after the departure of the two openers.

Marsh was caught behind off fast bowler Shoriful Islam before Mustafizur struck twice on successive deliveries to send skipper Matthew Wade back for four and Agar for naught.

"Should have got high 130s or 140s, which would have been a winning score on that track," said Wade. "The bowlers from both teams have done really well. Bowling isn't the problem for us, got to tidy up with the bat."

Ultimately, it turned out to be another satisfying result for Bangladesh. Even more so knowing it was their youngsters who saw them through during tricky times. Much like the first game where Mustafizur Rahman cleaned up Starc on the final ball, they once again finished the match in style. Afif scooped Hazlewood over the wicketkeeper's head for four, speaking for the touch of both calm and class with which he carried the chase alongside Nurul.

The third T20 is on Friday with all the matches to be played at the same venue.