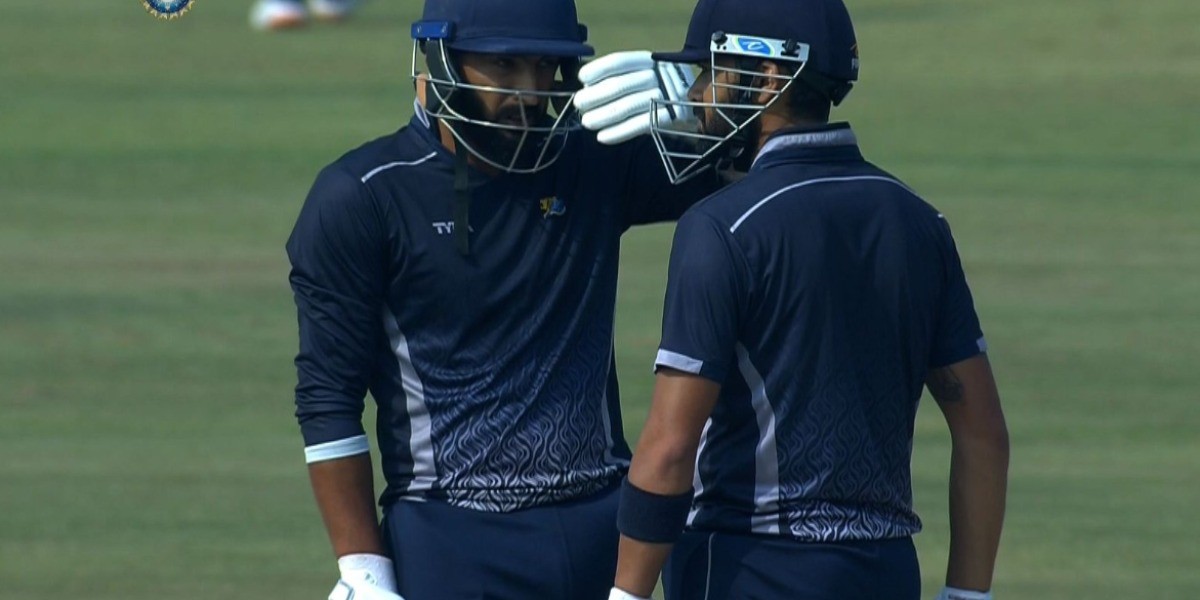 Rishi Dhawan led from the front with an all-round show as Himachal Pradesh beat Services by 77 runs in the semi-final at the Sawai Mansingh Stadium on Friday, to set up the title clash against Tamil Nadu in the Vijay Hazare Trophy. Tamil Nadu, on the other hand, had to battle it hard and eventually got the better of an impressive Saurashtra unit on the last ball of the game at the KL Saini Ground.

Jackson stands up when it mattered the most

Sheldon Jackson’s consistency in Indian domestic cricket is unparalleled and that has often made many experts go completely crazy about his absence, even in the A-set-up. However, since his heroics in the Syed Mushtaq Ali Trophy last month, his returns in the 50-Over competition have drastically gone down, with his scores reading 0, 21, 65, 10, 5, and 15. However, come the most important game in the tournament so far, Jackson hit the jackpot and how!

The KL Saini Ground, Jaipur didn’t have the televised facility, hence it would be difficult to bring in a sensible perspective but Jackson’s century surely saved the day for Saurashtra. Tamil Nadu’s potent bowling line-up suffered the wrath of his batting as Jackson, joining forces with opener Vishvarajsinh Jadeja and later with Arpit Vasavada, to get to his 8th List A century and in the process, staked his claim ahead of the mega auction in February.

He would have liked the bowlers to complement his efforts and shut the door on Tamil Nadu after Shah Rukh Khan was dismissed in the 47th over but that wasn’t to be. Four-time champions Tamil Nadu found strength in Sundar’s batting and later some lusty blows from R Sai Kishore to book a berth in Sunday’s final.

Washington Sundar makes the difference at the end

Returning from the injury, many would have expected Washington Sundar to be on the flight to South Africa, but the ticket arrived in Jayant Yadav’s inbox. Sundar was left to fight it out in the Vijay Hazare Trophy and boy did that pay dividend?

After a 34 and 31* in the group stage, Sundar just managed a 0, 4, 8, and 0 in the next four games. With Saurashtra posting a huge total on board, Tamil Nadu would have hoped for a bigger impact from their top order but Jagadeeshan and Vijay Shankar’s failure to build on the Baba Aparajith momentum ensured that there was a mini hiccup. It was left to Baba Indrajith to restore some sanity and from there, Sundar beautifully took over the impetus to ensure that Tamil Nadu reach the final. Sure enough, Chirag Jani’s last over threw some difficult questions, but by winning the game eventually, Tamil Nadu proved why they are one of the most feared and possibly the most complete white-ball side in the country at the moment.

Himachal Pradesh can’t claim to be one of the domestic powerhouses but they have always done the right thing in showing up. This Vijay Hazare Trophy, the North Indian side took their game up by several notches, and at the center of it are two of their most prominent cricketers to have come out of the state - Rishi Dhawan and Prashant Chopra. The duo have been in red-hot form in the ongoing competition and have scored 416 and 435 respectively at an average of 69.33 and 62.14.

In the semi-final, Chopra first started the onslaught, taking on Services’ Diwesh Pathania and Raj Bahadur straight up. As Pathania went a bit fuller in search of swing, Chopra was happy to chop them off on the off-side - a trait that had once made him such a heavy-weight run-scorer in junior cricket. Rishi Dhawan played more of an innings of substance than style.

With Pulkit Narang and Rahul Singh trying to contain one end up, Dhawan waited and waited before suddenly stepping on the accelerator to ensure Himachal had the upper hand at the halfway mark of the innings. Further, with the ball, Dhawan picked up four wickets to ensure that Himachal Pradesh didn’t have to break a sweat in order to book the game in their pocket.

Captain @rishid100 stars with bat and ball as Himachal Pradesh beat Services by 77 runs to march into the #VijayHazareTrophy #Final. 👍 👍 #SF1 #HPvSER

The understated impact of Mayank Dagar

Six years ago, just after India’s 2016 U-19 campaign, I had sat down with Mayank Agarwal for a profile. He was candid and confident - a typical modern-day swagger combined with a grace that made me so curious about his career since that day. While he has failed to take strides in the Indian cricketing landscape like many of his contemporaries already have, but Dagar has been an integral part of the Himachal Pradesh set-up, mostly down to the impact he brings to the table.

In the group stage, he dismantled Odisha by picking up six wickets but most of his other performances helped others to take wickets than himself. He built pressure from one end and kept a tidy channel to ensure that Services batters never had the chance to open their arms. It is fair to say that Dhawan and Sidharth Sharma were benefitted from that.