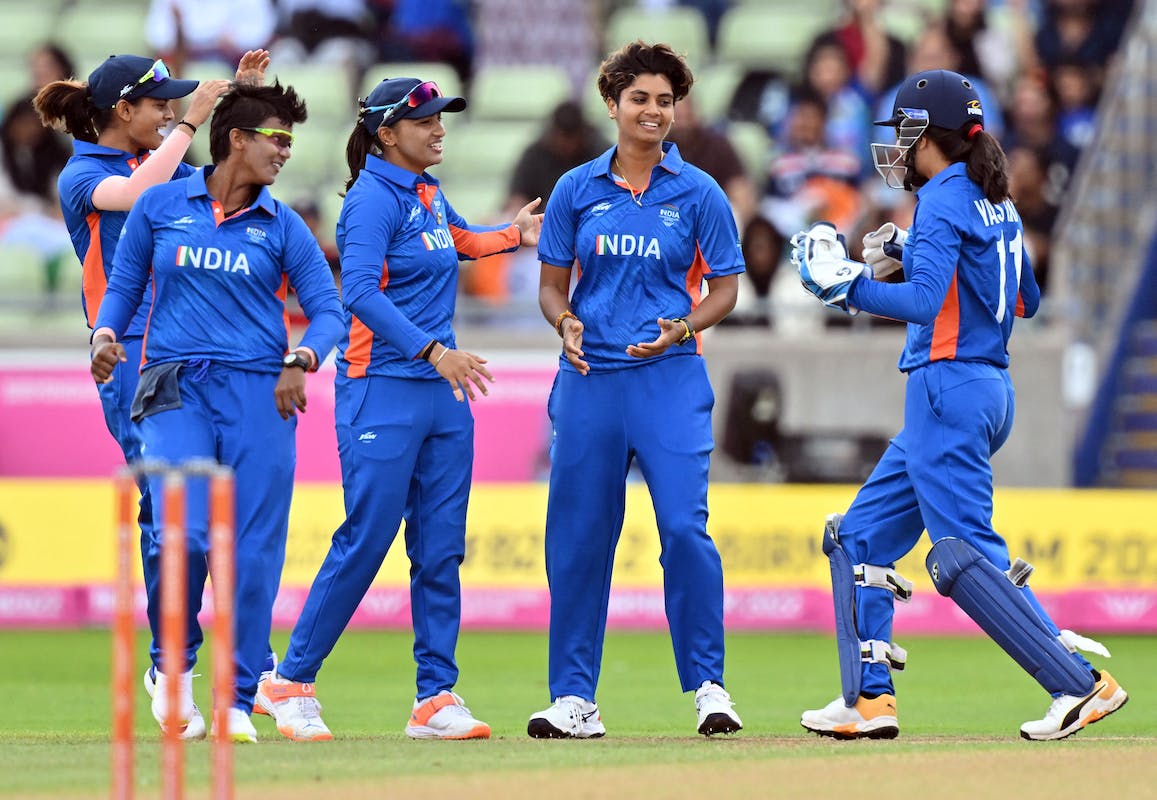 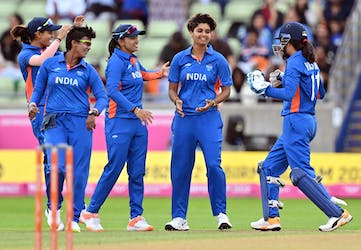 "Definitely, we are aiming for the gold. I don't think we will just look for a podium finish because when the flag goes higher, and the National Anthem is played, that's the best feeling you have.”

This was Smriti Mandhana, the vice-captain of the Indian side, making her and her team’s intentions clear prior to the tournament.

India did not enter the games as outright favourites for gold, but given they’re ranked fourth in the format, and they made it all the way to the summit the last time a global event was played in the shortest format, it is a completely reasonable and realistic target.

As things stand, they are three wins away from achieving the objective.

But as much as Mandhana stressed that the side won't be satisfied with just a podium finish, it is hard to imagine that the players won't be excited by the fact that they are a solitary win away from finding themselves competing in a medal match.

For in the case of most individuals, it is a realization of a lifelong dream.

What's at stake, then, for the Women in Blue, is humongous. Without any exaggeration, the players will be stepping out on Wednesday knowing that they’re going to be taking part in no ordinary match; waiting on the other side is a potential ticket to go right into the annals of history.

This, remember, is us narrating the story from an Indian perspective. On the other side are the women from Barbados, for whom Wednesday’s encounter is set to be the single biggest match in the country’s cricketing history.

All countries from the Caribbean Islands playing international cricket under the ‘West Indies’ denomination means that none of these players ever get to represent their country while playing the sport, let alone in a major event. In fact, Barbados, as a nation, played its first official international match only on Friday (July 29).

But a victory on Wednesday will give these group of players — who have been deprived of the opportunity to represent their own country at the international level due to the sport’s structure — a chance to potentially immortalize themselves.

Barbados was put on the cricketing map only last week, and there’s a good chance that the country might not play international cricket in the foreseeable future — if not ever again — but a win will take the players that much closer to being remembered as icons who scripted history.

This, right here, is the beauty of international sporting events; the story writes itself.

The game-changing arrival of Pooja Vastrakar

After her heroic effort with the ball against Australia went in vain, Renuka Singh Thakur minced no words; the pacer admitted that the team sorely missed the services of Pooja Vastrakar with the ball.

The Women in Blue got through Pakistan with relative ease, but the good news for the Harmanpreet Kaur-led side is that Pooja Vastrakar is back, having successfully rejoined the squad after recovering from Covid. And her return couldn’t have come at a better, more important time for India, who on Wednesday will be playing the decisive virtual quarter-final against Barbados.

Vastrakar is expected to take the place of Meghna Singh in the XI, and India, really, wouldn’t mind it one bit, for the latter misfired big time in the team’s first two matches. Across the Australia and Pakistan encounters, Meghna conceded at an ER of 9.8; so far in CWG 2022, no bowler to have bowled a minimum of 5 overs has proved to be more expensive. 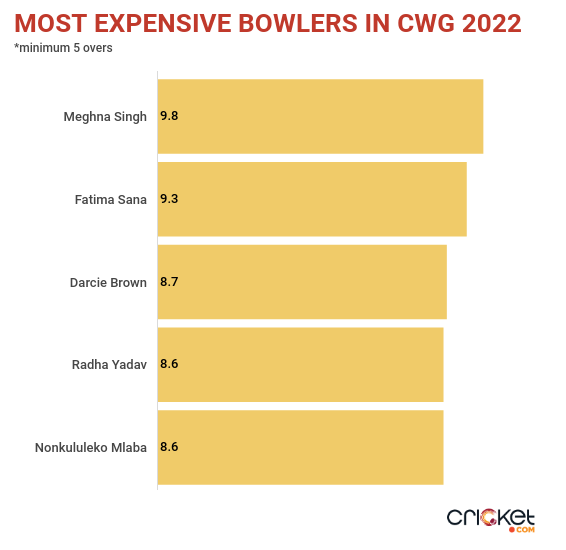 Vastrakar will instantly add more discipline to the attack. The right-armer, this year, has been one of the hardest bowlers to put away, evident by her economy of 3.9. She has predominantly operated in the middle-overs (7-15) — bowling 58% of her overs in the phase — and this is something of significance because India have struggled in overs 7-15 in CWG 2022: their economy of 6.8 in the phase is 5th among 8 teams. Vastrakar’s return, it goes without saying, will help the side keep opposition batters in check in the middle.

Crucially, the 22-year-old will also add some much-needed teeth with the bat to the lower order. This is also important because lack of depth with the bat was one of the glaring reasons for the side’s loss against Australia in the curtain-raiser, where batters #7 to #9 combinedly scored just 9 runs off the 10 balls they faced, failing to provide able support to Harmanpreet.

Vastrakar, as she showed in the ODIs against Sri Lanka, is more than handy with the bat, and her secondary skill could prove pivotal should the game be decided by fine margins.

Who should India be wary of? 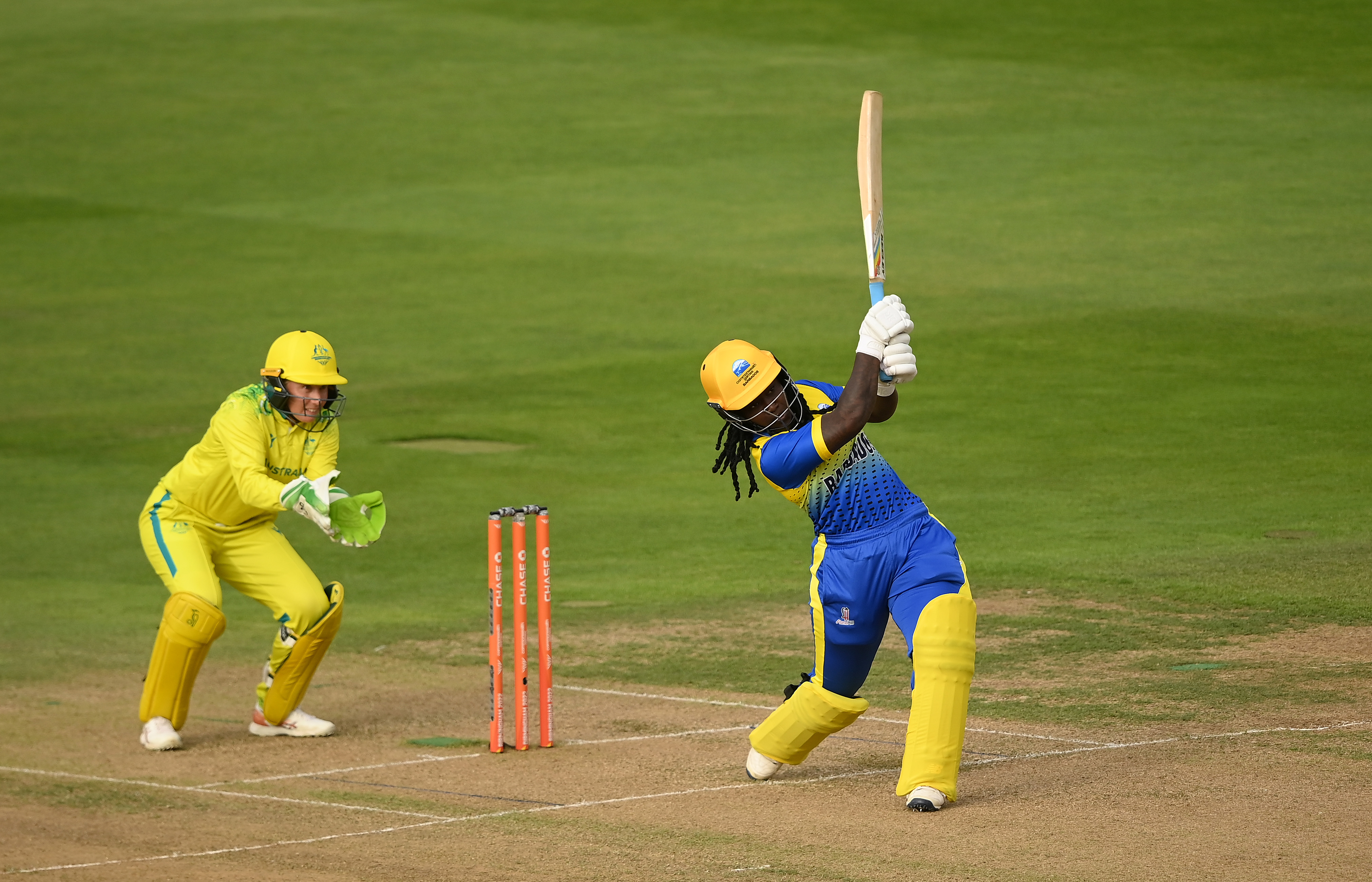 Barbados might be entering Thursday’s clash on the back of an absolute trouncing at the hands of Australia, but India would do well to be wary of the threats they possess. And there are two key ones.

The biggest one being skipper Hayley Matthews, who has the ability to win games of cricket with both bat and ball. She, in fact, architected the upset against Pakistan, scoring 51 with the bat before sending down a flawless spell (1/13 off 4) to bowl the side to victory. She was the sole silver lining against Australia (top-scoring with the bat and even sneaking in a maiden with the ball) and will, no doubt, embrace the challenge of carrying her team into the knockouts.

Deandra Dottin, the holder of the fastest Women’s T20I century record, is also no stranger to the Indians. Dottin might not have played a T20I against India in six years, but most Indian players know exactly what the veteran is capable of, having seen her in close proximity in the Women’s T20 Challenge. Dottin, in fact, pocketed the Player of the Tournament award in the most recent edition of the competition. She, much like her opening partner Matthews, has the ability to turn games on its head with both bat and ball.

The memories of Dottin and Matthews wreaking havoc in the 50-over World Cup earlier this year — albeit not fatally — will still be fresh in the mind of the Indian bowlers, who that night in Hamilton saw the pair bulldoze their way to 100 inside 12 overs.

There are also other players who can hurt India, such as wicket-keeper batter Kycia Knight, medium-pacer Shakera Selman and right-arm quick Shamilia Connell, but Matthews and Dottin are the only Barbadian players who, on their night, could truly take the game away.