India succumb to New Zealand in a World Cup thriller 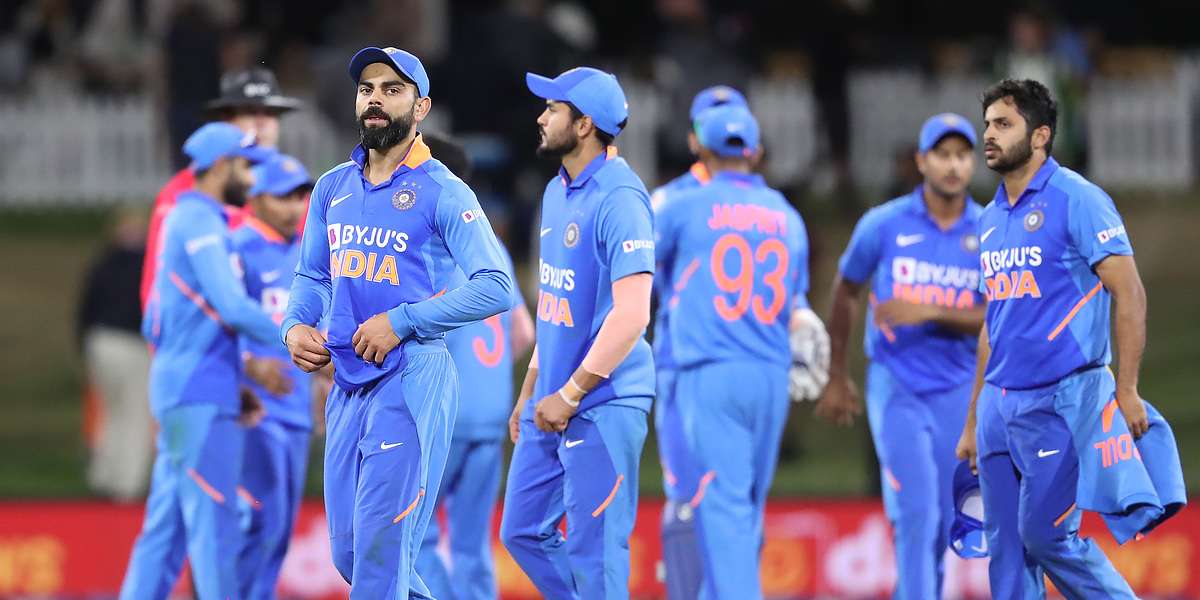 India succumb to New Zealand in a World Cup thriller

On this day in 2019, India's hopes of a World Cup title were dashed by a determined New Zealand side

India vs New Zealand. World Cup semi-final. The magnitude of the match was so huge that even the rain gods could not hang on and as a result, when it poured, play was called off after New Zealand had batted out 46 overs. Luckily, there was a reserve day. Any other edition of the World Cup, there would not have been a reserve day and India by virtue of finishing above New Zealand in the group stages, would have made it to the final. If that had happened, the Kiwis perhaps would not have had to suffer the heartbreak they endured in the final. While they were comprehensively beaten in the 2015 final by Australia, they returned four years later to play out arguably the greatest ever 50-over contest, but yet again finished second best. However, that’s a story for another day.

New Zealand’s progress to the final four was anything but smooth. They started off well with a 10-wicket thrashing of Sri Lanka in the opener, followed by a narrow two-wicket win over Bangladesh, and then beat Afghanistan by seven wickets. They also went on to win the next two out of the three matches – against South Africa and West Indies – with the game against India washed out.

However, they lost to Pakistan, Australia and England in their next three matches but still had enough points to take them through to the semis. All they needed from there were a couple of good days and the coveted World Cup title was theirs.

They came face-to-face with India in the final four, which was not going to be easy, given that the team from the subcontinent were dominant in the group stages, finishing top of the ladder, having lost just one match. The line-up that India had was perhaps the most balanced side in the tournament – be it the batting department, bowling department or for that matter even the wicketkeeping department, which boasted of MS Dhoni, Dinesh Karthik and Rishabh Pant.

As far as New Zealand was concerned, there were a few cracks in their side with the form of Martin Guptill a cause for concern. Also, after Ross Taylor at four, there were very few who had stepped up with the bat over the course of the tournament. However, they had a solid bowling line-up and if their batsmen gave them something to bowl at, they rarely disappointed.

In a big match it was no surprise that New Zealand had won the toss and elected to bat. Guptill continued his poor form as he was caught brilliantly for one by Virat Kohli. Henry Nicholls (28) further added 68 with his skipper Kane Williamson (67) in nearly 15 overs, followed by a further 65-run partnership between Williamson and Ross Taylor (74) in 17 overs. Once Williamson fell, India were still very much in control having reduced their opponents to 134 for 3 with less than 15 overs to go. New Zealand still had Taylor at the crease and big hitters like James Neesham and Colin de Grandhomme to support him later.

But Neesham (12) and de Grandhomme (16) were back in the hut just as New Zealand hit 200. With play halted, Taylor was New Zealand’s only hope with four more overs to go. After he was run-out, Latham (10) too couldn’t add much, but the Kiwis did not get bowled out and finished with a competitive 239 for 8.

Chasing 240 to win, every Indian fan’s worst nightmare came true – the top three consisting of Rohit Sharma, KL Rahul and Kohli were dismissed for single digits and the score read 5 for 3 in 3.1 overs. It seemed like New Zealand already had one foot in the final, but the job was not completely done. Dinesh Karthik and Pant had to weather the storm after Trent Boult and Matt Henry had wreaked havoc in the opening stages of the innings.

Karthik fell for a painstaking 29-ball 6, thanks to a brilliant catch from Neesham at backward point. India at that point were 24 for 4 from 10 overs – easily the worst start any team had made in the World Cup. Given that this was the next morning, there was a bit more in it for the fast bowlers, who made the best use of the overcast conditions. However, the India batsmen could have taken a leaf or two out of the opposition’s books by keeping their wickets intact in the initial stages and later on once set, to bat freely.

Pant (32) and Hardik Pandya (32) had put on 47 for the fifth wicket, but both of them were back in the dressing room within the 31st over, with India scoring at just about three an over. 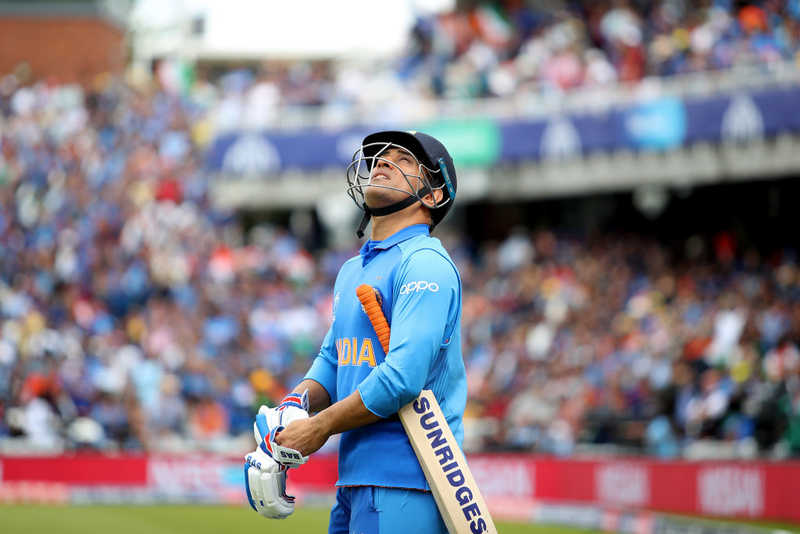 Was it too late? If any other cricketer other than Dhoni was at the crease at that point, you might as well call it a day. With Dhoni at the crease, anything was possible.

Dhoni was joined by Ravindra Jadeja at eight, who had a point to prove after Sanjay Manjrekar had called him a ‘bits and pieces cricketer’ and that India do not need such players. At 92 for 6, not many gave India a chance of getting another 148 in under 20 overs with just four wickets in hand, but had not given up just yet. Dhoni has often taken the match into the final few overs and managed to get the team over the line, although, he had lost a bit of his Midas touch over the years. But he and Jadeja remained India’s last hopes on the day.

Runs were coming slightly quicker. Jadeja was looking to prove a point and Dhoni on the other hand was happy to keep his wicket intact, despite the fact that the required run-rate was creeping close to nine. As Jadeja kept the runs flowing, many reminisced about the game in 2014 at Eden Park when Jadeja walked in at 184 for 6, with India chasing 315 to stay alive in the series. He smacked an unbeaten 45-ball 66 to tie the game. Could he pull it off once again?

The duo brought up their 50 partnership in almost run-a-ball, with Jadeja contributing 36 of them. India needed 90 from the final 10. Game still very much on. That’s when Jadeja started to turn the screws. He brought up his fifty off just 39 deliveries, did his usual sword dance but this time, made a gesture towards the commentary box at ‘someone’.

India were keeping up with the asking rate and New Zealand for the first time in the match were under a bit of pressure. The partnership was blossoming but India now needed 52 from the final five. We were well and truly into the business end of the match. The crowd and millions back home were on the edge of their seats.

The 100 partnership was brought up. 44 off 26 were needed. Henry bowled a quiet over. The equation quickly changed to 37 off 18. In a quest to clear the ropes, Jadeja skied a slower delivery off Boult and Williamson takes a good catch. That’s it! India’s dream of making it to another final ends with Jadeja’s big-hearted 77 off 59. But wait! It’s not over till Dhoni is around, right?

The former India captain was batting on 42 off 68 at that point. Bhuvneshwar Kumar, who is no mug with the bat walks out. He had made an unbeaten 53 batting at nine in 2017 in Pallekele – along with Dhoni – to help India chase down 231 after his side was reduced to 131 for 7. Could he possibly do what Jadeja had done, only this time, it had to come in the semi-final of a World Cup!

It was Dhoni vs New Zealand now. 31 to win from 12. Dhoni started off the over in the perfect manner dismissing Lockie Ferguson into the stands for a huge six. Two balls later Dhoni guided a short ball to the on-side behind square. It’s obvious he wanted two and Guptill placed a little deeper was well aware. Dhoni completed the first run and then scampered back for the second to retain strike, but Guptill is up to the task and gets the direct hit in. Dhoni falls inches short. Heartbreak.

Dhoni walks back dejected for a 72-ball 50, perhaps for the last time in India colours. Exactly an over later, New Zealand get the final Indian wicket and have made it to the final for the second time in a row. India on the other hand too have made it twice in a row of crashing out at the semi-final stage of the World Cup.

New Zealand faced heartbreak a game later in the grand finale against England, where they couldn’t wrap their hands on the trophy not because they had fewer runs or the opposition had more, but because they did not score more boundaries than England.

You couldn’t write a script like that even if you hoped to.