India’s biggest win, Kohli’s 50th win in Test as a player, best spell in a loss & many more 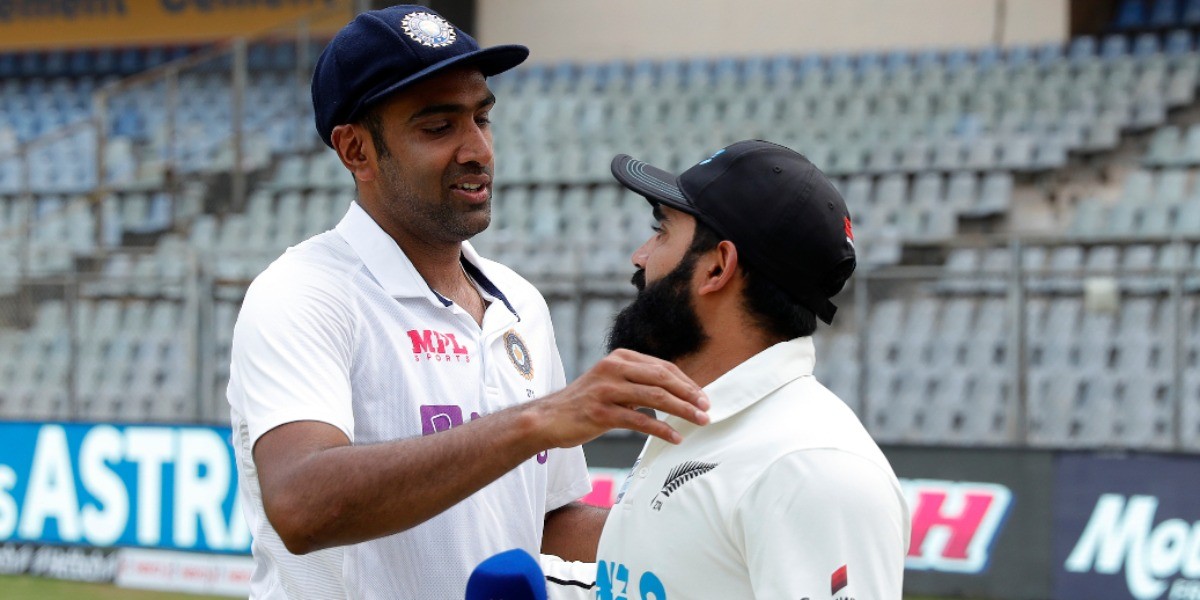 India’s biggest win, Kohli’s 50th win in Test as a player, best spell in a loss & many more

Heading into the fourth day, India needed five wickets to register yet another series win at home. Indian bowlers took 6.5 overs to break the overnight sixth wicket partnership and there on it was just customary procedures. It took another 4.4 overs to clean up the remaining four wickets. Jayant Yadav who was wicketless on day three, bagged four out of the five wickets today and Ravichandran Ashwin chipped in with the wicket of Henry Nicholls (last wicket). By virtue of it, India registered their 14th consecutive series win at home by a massive margin of 372 runs. Here are a few notable stats from the fourth day:

A shared victory for Indian bowlers

It was a match of contrasts for both the teams in terms of bowling. Though fielding five proper bowlers, it looked as if Ajaz Patel was the only bowler bowling against India. Whereas, it was a team effort from Indian bowlers. They picked up 20 wickets for less than 250 runs in this match and 16 of those belonged to spinners, three for pacers and one run-out. The reason why we say it’s a complete team effort is, none of the bowlers bagged a five-wicket haul in this match. The best spell in this match was by Ashwin (4/8) in the first innings. In this century (In Tests Since 2000), the 16 wickets bagged by Indian spinners without a five-for is the most in a match. In fact, through this series, there was only one five-for by an Indian bowler and that belonged to Axar Patel in the first Test. Despite it, India bagged 38 wickets, which is the joint second most for them in a two-Test series that has witnessed one or lesser 5-wkt haul. Against Bangladesh in 2010, they had bagged 40 wickets with one 5-wicket haul and one 10-wicket match haul. 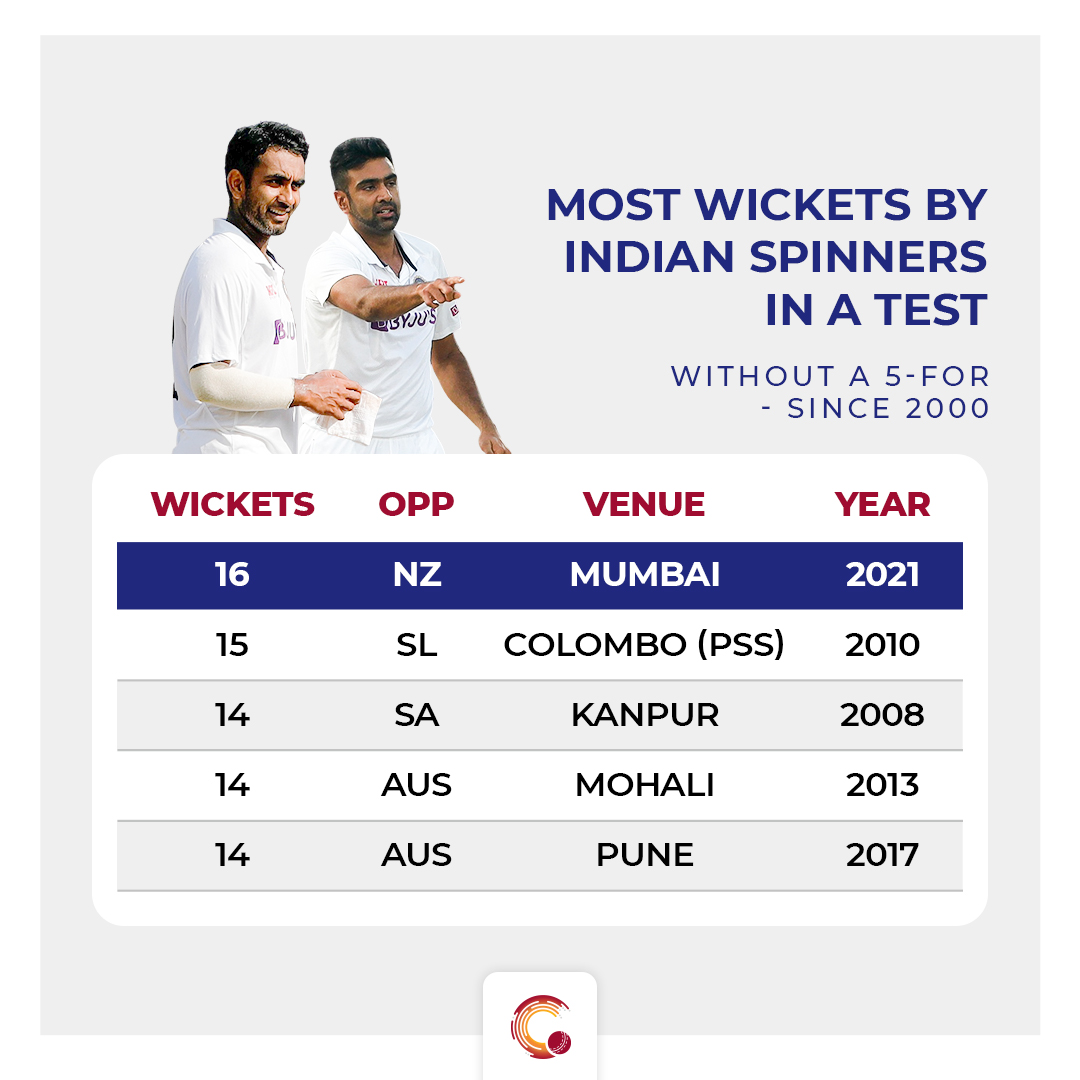 Out of the 16 wickets, Ashwin had bagged half of those. His match returns of 8/42 is the second best spell for a bowler without a 5-for.

New Zealand’s lowest in this century

After being cleaned up for 62 in the first innings, New Zealand registered the lowest innings score by a team against India in Tests. Though they made progress in the second innings, all they could get was 167. Overall, New Zealand had an aggregate of 229 in this match from both innings. In this century, this is the lowest for them in a Test where they have batted in both the innings. Previously, in 2013 against England at Lord’s, they had scored 275, their lowest. 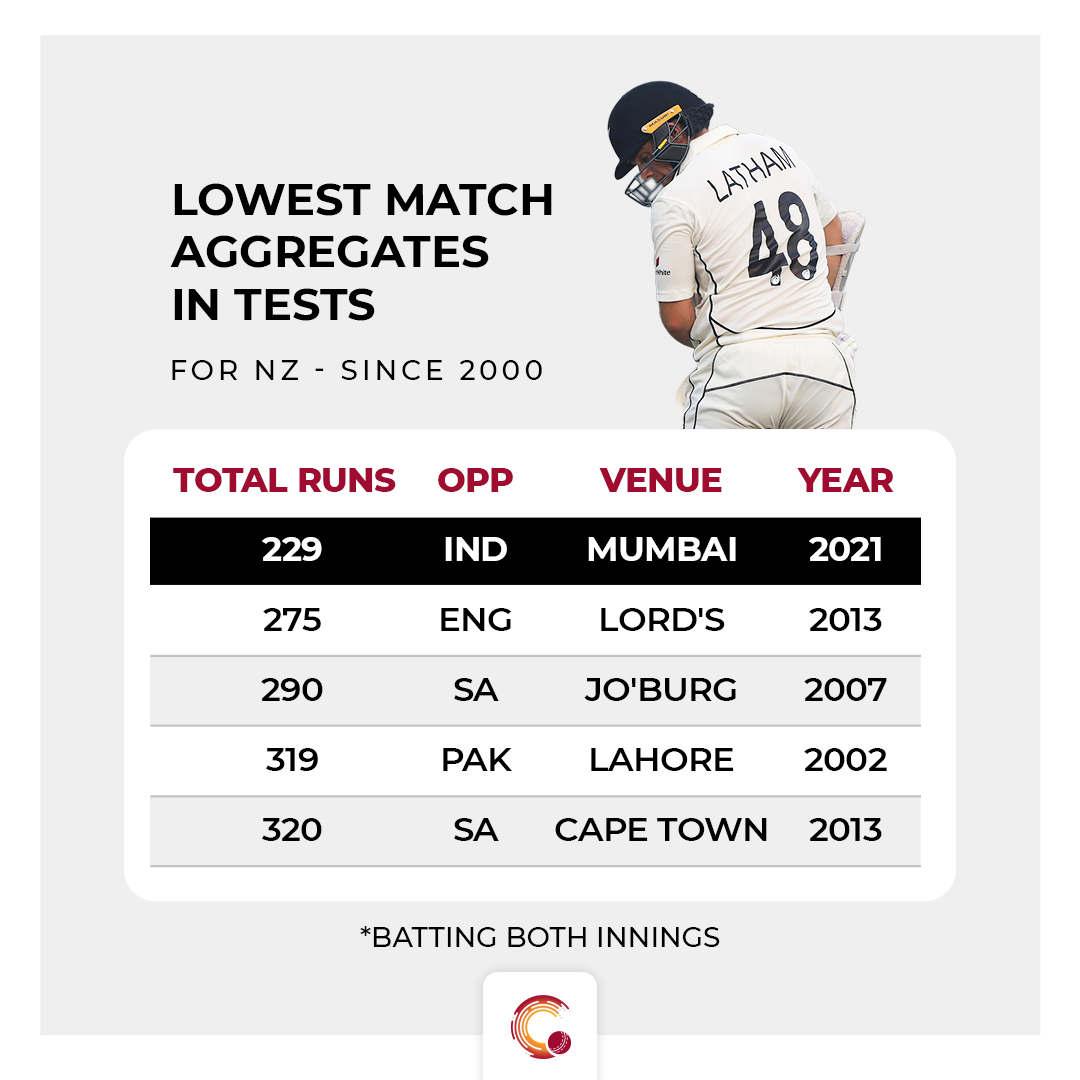 Ashwin has been a thorn in New Zealand’s path whenever they have toured India, since his debut. In each of the three-home series played against New Zealand, he has bagged 14 or more wickets in each. 18 in two matches in the first tour in 2012, 27 in three matches in 2016 and 14 in this series. 59 wickets in three home series and seven when he has toured New Zealand. In total, he has 66 wickets against the opponents, which is the most for a bowler in contests between India and New Zealand. With the last wicket of Nicholls, he went past Sir Richard Hadlee (65). 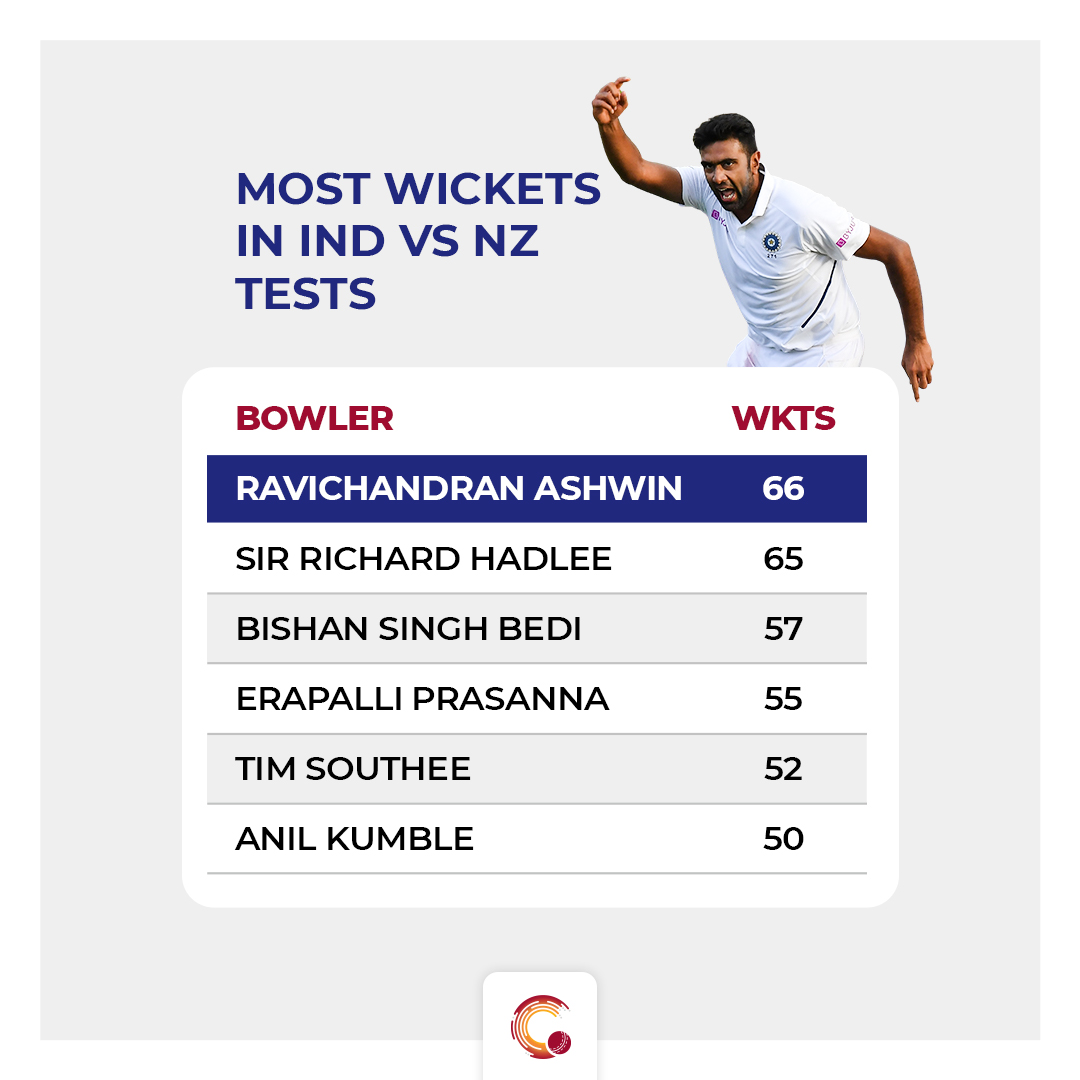 He has just played 81 matches and has bagged nine series awards in Tests. Interestingly, to boost on the above point, in all three New Zealand’s Test tours to India since Ashwin’s debut, he has been the Player of the series, another evidence of his authority over the Kiwis. Overall, his ninth series award is the joint second most for a player alongside Jacques Kallis. Only Muttiah Muralitharan with 11 is ahead of him. 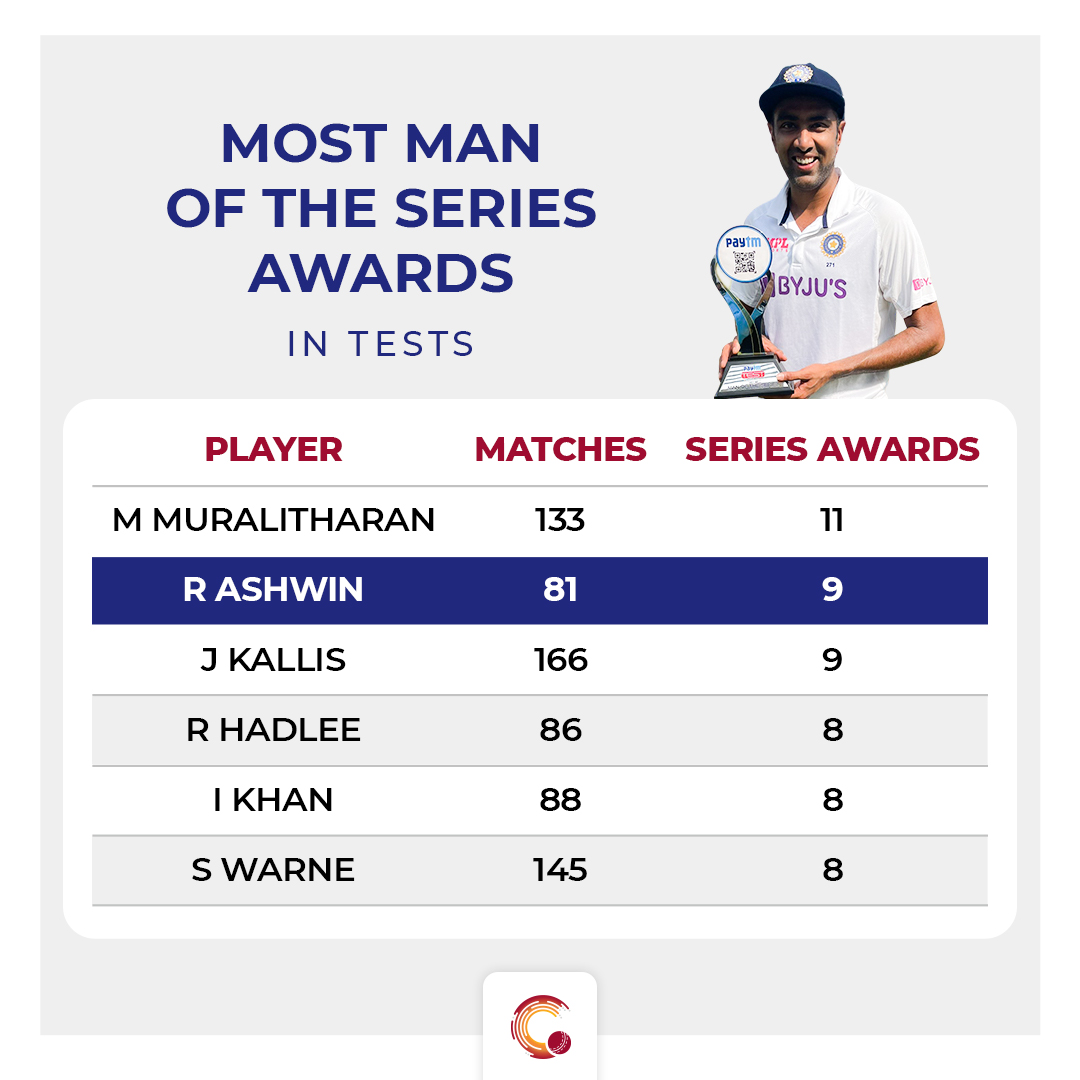 A scrupulous big win for India

Throughout this Test, India have been very clinical and methodical. In their first innings with the ball they bowled out New Zealand for 62, the lowest score against India in Tests. In the second innings with the bat, they set their highest target on home soil on day three (540). As cherry on top, they ended the match with a massive win of 372 runs, their biggest win in terms of runs in Tests. To add more, this is also the biggest margin of defeat for New Zealand in Tests and the biggest win for a team in India. 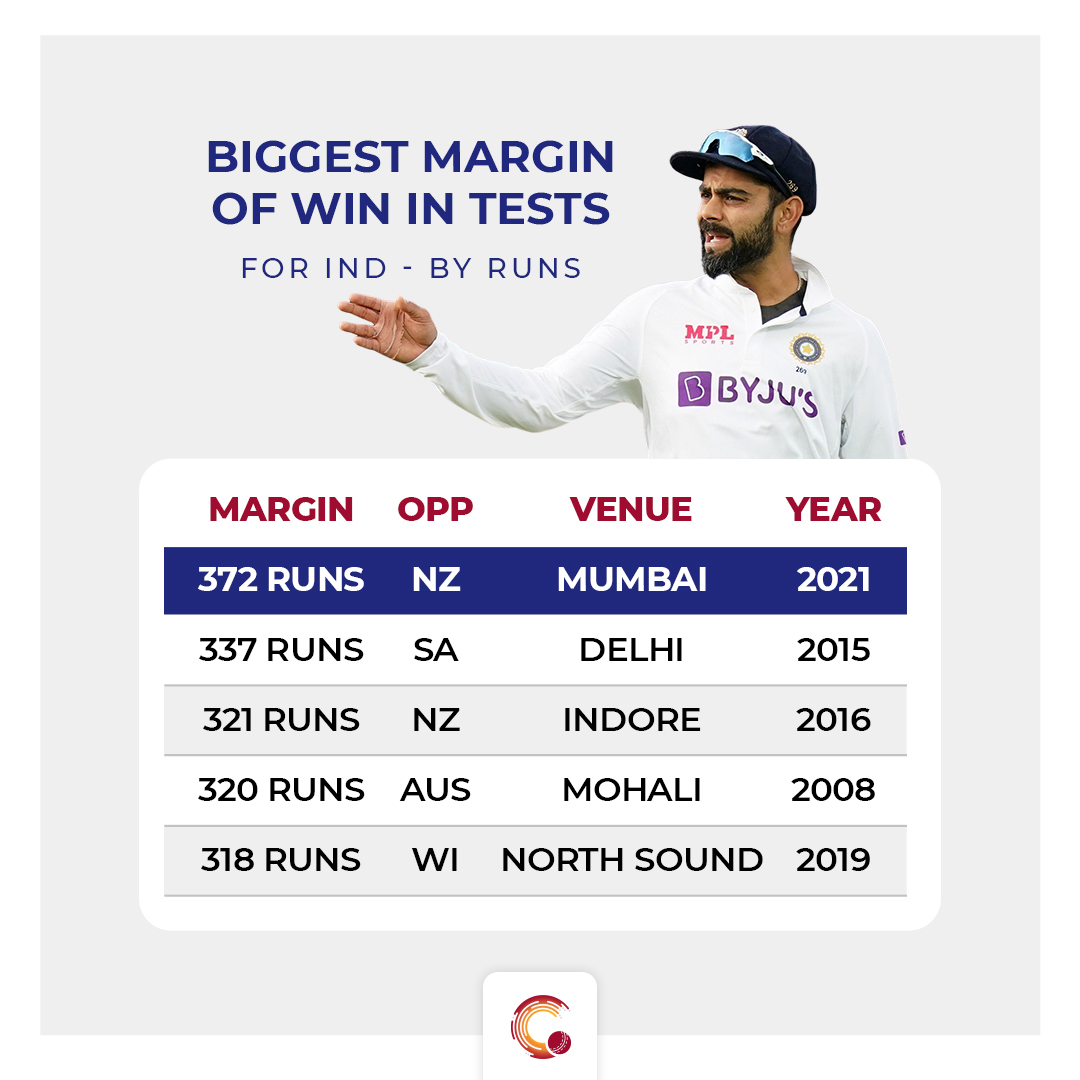 Yes! This is one of Kohli’s most decorated half-centuries, but not with the bat. India’s win in the second Test at Wankhede, marked Kohli’s 50th win in Tests. Among Indians, he is the fourth to achieve this feat after Sachin Tendulkar (76), Rahul Dravid (56) and Cheteshwar Pujara (53). With 153 wins as a player for India in ODIs and 59 wins in T20Is, Kohli became the first ever player to be involved in 50 wins across the formats.

Last week, in our Cricket.com’s episode and feature of decoded, we explained how India have been dominant at home. Post their series loss to England in 2012, India haven’t lost or drawn a series till now. By virtue of a win in the second Test, India extended it to 14 consecutive series wins at home, the most for a team. Australia from 1994 till 2001 and from 2004 till 2008 had 10 consecutive series wins at home, the second-best streak.

In this Test series, for both the teams, leaders were different in each of the matches. In the first Test, Ajinkya Rahane led India and Kane Williamson led New Zealand. In the second Test, irrespective of Rahane’s injury, the change in commander was unavoidable as Kohli was making a comeback. Whereas, Williamson was injured and Tom Latham stood as the captain. In two matches, there were four different captains in this series. Only once has this happened before in a 2-Test series, where there were four different captains and that was way back in 1889 between England and South Africa in South Africa. In the first Test, Owen Dunell led South Africa and Aubrey Smith for England. In the second Test, William Milton led for South Africa and Monty Bowden for England.

A herculean effort in the first innings by Ajaz was on the cusp of registering an unwanted record within the first hour of New Zealand’s batting performance in the first innings. When New Zealand were reduced to 62 and were given a mammoth target of 540, it was inevitable that his innings spell of 10/119 and his match spell of 14/225 would go down as the best one in a losing cause. Previously, both records were held by Indians. Kapil Dev in 1983 against West Indies held the record for best spell (9/83) in an innings in losing cause and Javagal Srinath against Pakistan in 1999 had match figures of 13/132 in losing cause.