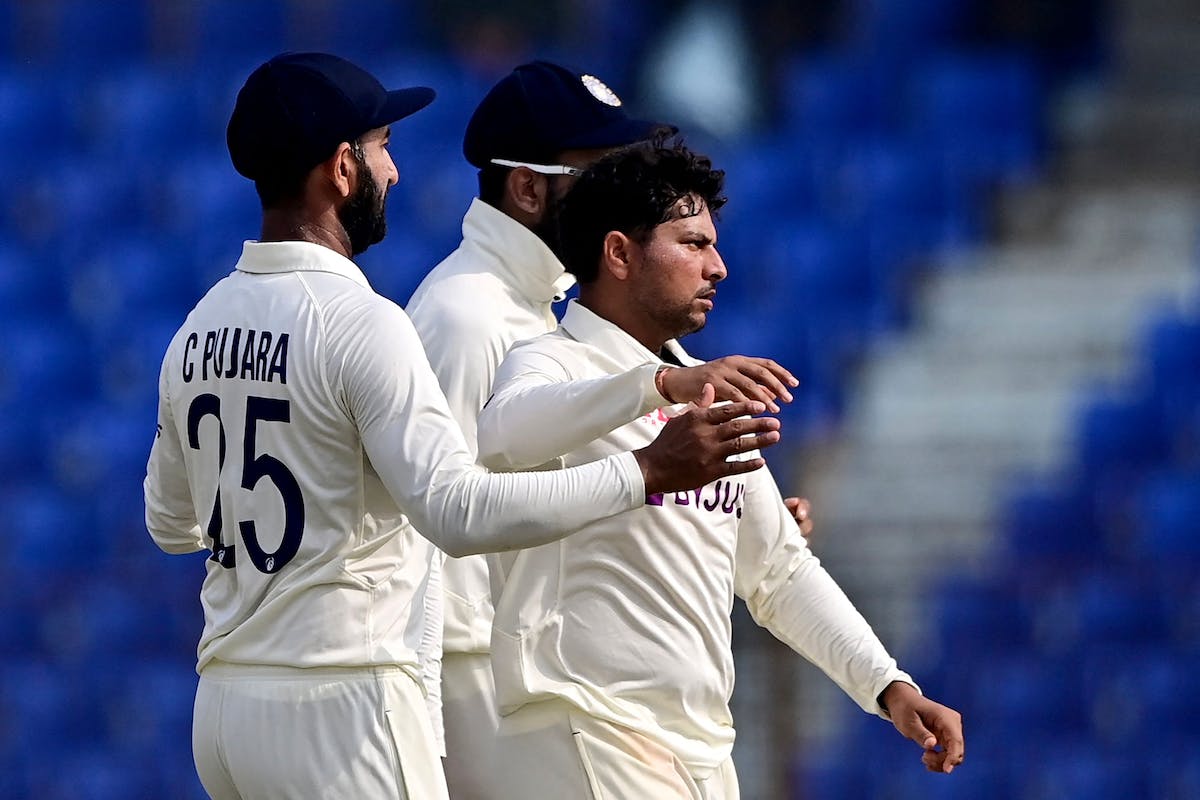 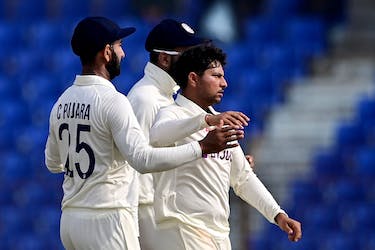 On an average, teams have scored 193 runs in the first innings as compared to 257 in the second innings against India this year

It was a resurgent Test for a few Indian players in the first clash. Cheteshwar Pujara registered a century after 1400+ days, Shubman Gill hit his maiden Test hundred, and Kuldeep Yadav made a strong comeback with a five-wicket haul in the first innings and a three-wicket haul in the second. By virtue of it, he was adjudged the player of the match.

As for Bangladesh, there were moments in the match when they were on top of India. However, they failed to seize those small moments. In the first innings, Bangladesh bowlers had reduced India to 48/3 in the first session of Day 1. However, Shreyas Iyer and Pujara resurrected the innings with a 149-run stand for the fifth wicket.

The biggest let-off in Bangladesh’s perspective was, the 87-run partnership between Kuldeep and Ravichandran Ashwin for the eighth wicket. This partnership took the game away from them. In any case, their batters let them down even more in the first innings. On a pitch in which there was help for batters, Bangladesh were bundled out for 150, conceding a lead of 254 for India.

The hosts, in their second innings, were hampered by some injuries. Ebadot Hossain suffered a back injury and didn’t bowl in the second outing, and he is likely to be replaced by Taskin Ahmed for the second Test.

One can find as many faults in Bangladesh's batting in the first innings, but they rectified them in their chase. It is just that the target was way too big. Losing by a margin of 188 runs in pursuit of 513 is a testimony of their effort.

Yes! Bangladesh's batting effort was commendable. But, if we look at the bigger picture, it was India’s woes with the ball in hand in the second innings. It is just not about this match, throughout this year, India’s bowling in the second innings has been the food for thought. 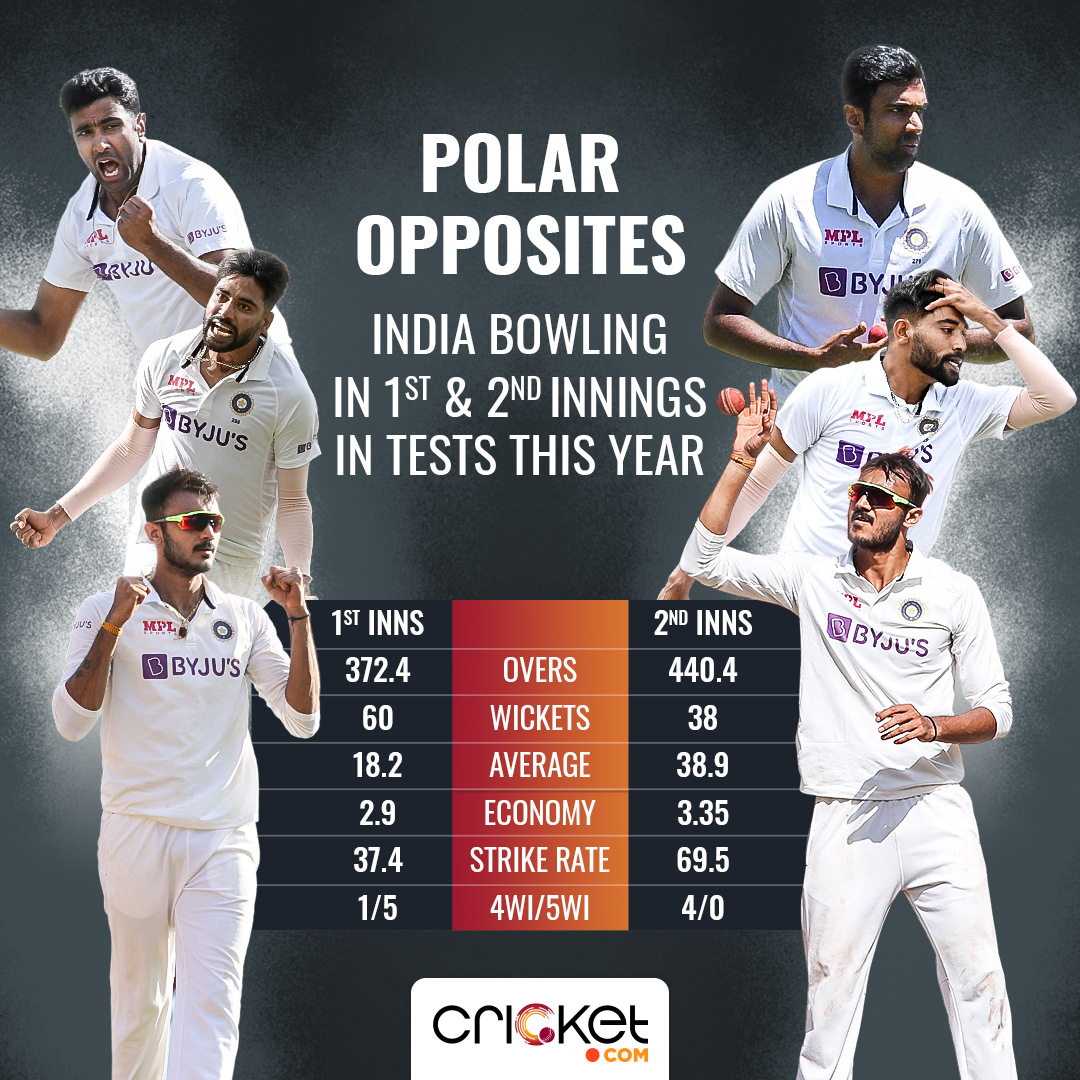 India have played only six Tests this year, and there has been a stark difference in their performance. In the first innings (1st or 2nd of the match), Indian bowlers have bagged a wicket every 37.4 balls and 18.23 runs. No other team has a bowling average of less than 25 or a strike rate less than 45. In each of the six matches, they have batted first and only once have they conceded a lead. Only England in their lone Test match, scored 250+. Clear enough to say, India have had an early advantage.

Yet, the same team with the same bowlers, tend to become toothless in the second innings. In the aforementioned time, Indian bowlers have bagged a wicket every 69.5 balls and 38.9 runs. A bowling strike rate difference of 32.1 between innings is certainly a massive issue. 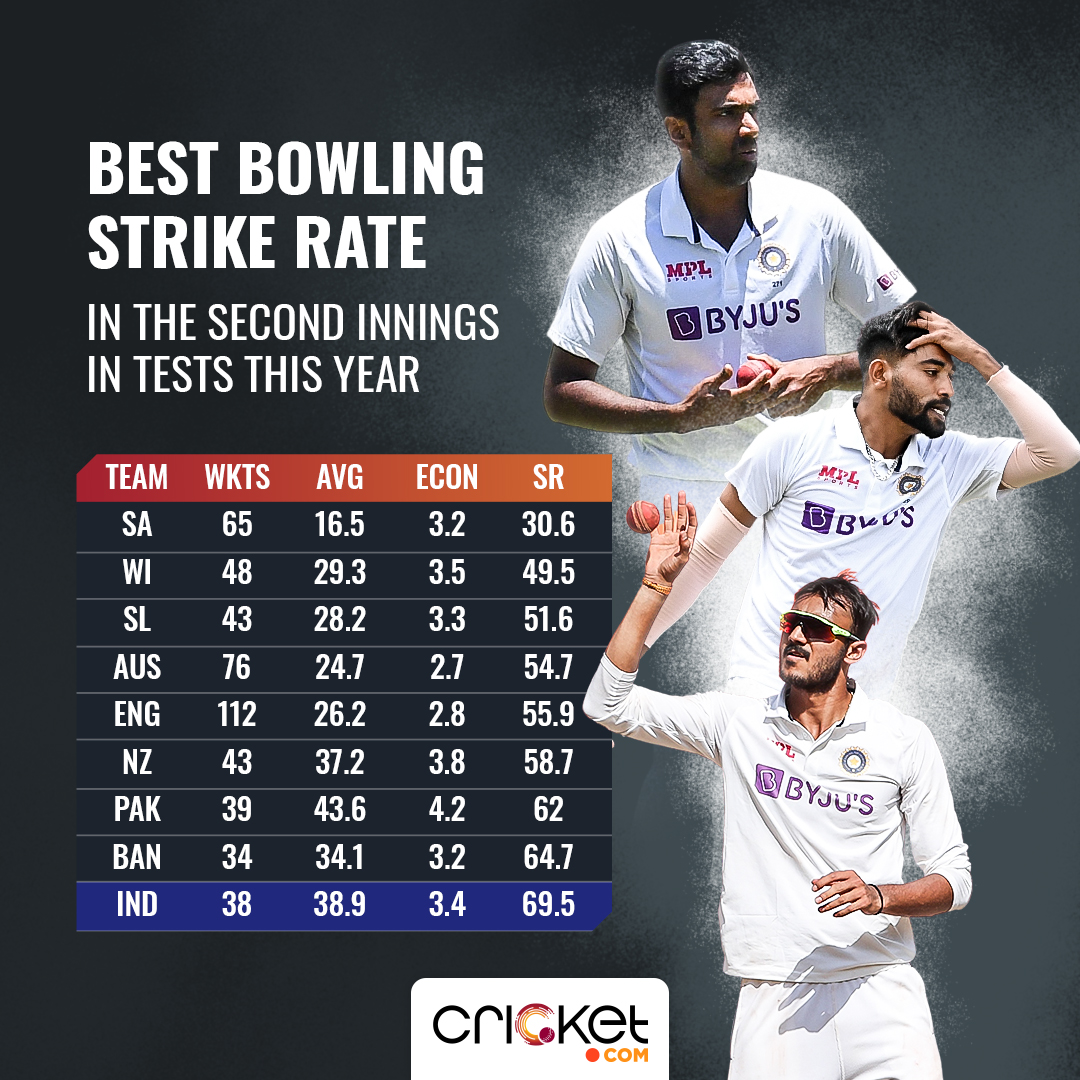 Among all the teams this year, If India’s first-innings bowling strike rate and average is the best, their second-innings strike rate is the worst. In terms of average, only Pakistan have been poorer (43.6).

A year left-handers have rejoiced against Ashwin

Generally, being a left-handed batter, facing Ashwin is always a menace. He is the only bowler to have 200+ wickets against lefties is an evident fact of the above statement. However, this year, that hasn’t been the case.

In five matches Ashwin has played this year, he has picked only six wickets against left-handers. He has those wickets at a balls/wicket ratio of 85.3 and an average of 33.8. Across the years, the year 2022 has been his worst against left-handers in terms of both average and strike rate. Just a reminder, he has bowled 50+ overs in each year against them, barring 2020, and he has bowled six innings in Asia.

With plenty of left-handers in the Bangladesh batting line-up, Ashwin could pick up only one wicket in the first Test. His lone wicket also came against a left-hander when he dismissed Zakhir Hasan in the second innings.

In Bangladesh’s perspective, Ebadot who didn’t bowl an over in the second innings is likely to be replaced by Taskin Ahmed. Donald confirmed in the presser that Shakib will play and will bowl in the second Test at Dhaka. Which means, there could be only one change from Bangladesh’s side.

In the press conference ahead of the second Test, India’s batting coach Vikram Rathour said KL Rahul suffered a hand injury, but he further added “It doesn’t look serious. He seems to be fine and hopefully he will be okay. The doctors are looking at it.”. If he isn’t fit, then Pujara could lead the side and Abhimanyu Easwaran could be in-line for a debut. Rohit Sharma was ruled out of the second Test few days prior.