IPL 2020: An outlying season of pace over spin 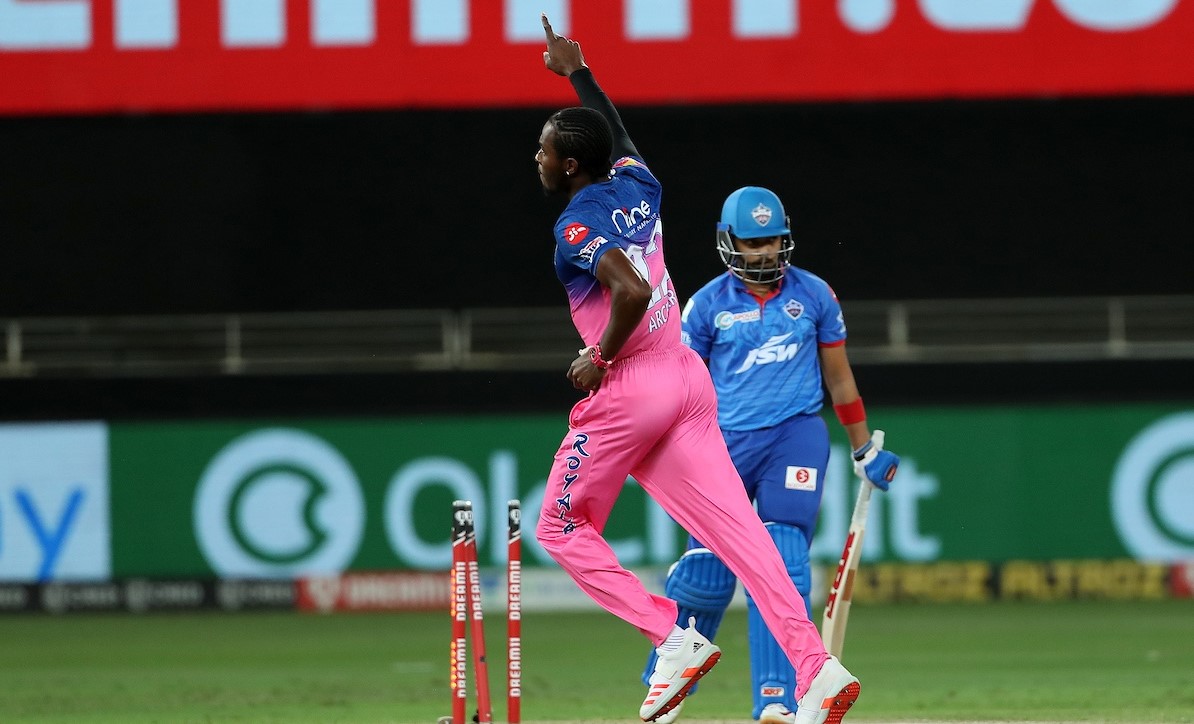 IPL 2020: An outlying season of pace over spin

Every T20 league brings a local flavour which distinguishes it from other leagues. IPL already rises above its peers owing to the second largest population in a world driven by an unparalleled love towards cricket. BCCI being one of the first-movers in the territory of franchise cricket also played its part.

On cricketing grounds, India, with its rich history of spinners was supposed to bring them to the forefront of T20 cricket, even though experts had written their obituary at the inception of the format. That is what happened. The use of spinners in IPL was at its peak in 2019 which could well be termed as a season of turn and bounce.

When the 2020 season was announced to be staged in the UAE, it appeared to be another grand season for the tweakers. Teams with a good spin attack were seen at an advantage. Chennai Super Kings and Delhi Capitals made it to every experts’ probable Top 4 as their squad boasted of the most experienced spinners. Royal Challengers Bangalore roped in the leg-spinner Adam Zampa as a replacement for the unavailable pace bowler, Kane Richardson.

However, what happened drew stark juxtaposition with the expectations. The pitches were conducive to fast bowlers and we witnessed pace ruling the roost.

It was uncharacteristic behaviour from the UAE pitches. In T20Is involving the Test playing nations in the UAE since 2018, spinners took wickets at 21.5 runs apiece while getting a wicket every 20 balls. The economy stayed at 6.5 runs per over. In IPL 2020, spinners went at 34 runs per wicket and 27.1 deliveries per wicket while conceding runs at 7.5 per over.

Let us analyze the middle phase - overs 7 to 15 in every T20 innings. The spinners are supposed to be more dominant in that phase, which had been the case in IPL since 2012. The numbers since 2017 tell the tale. 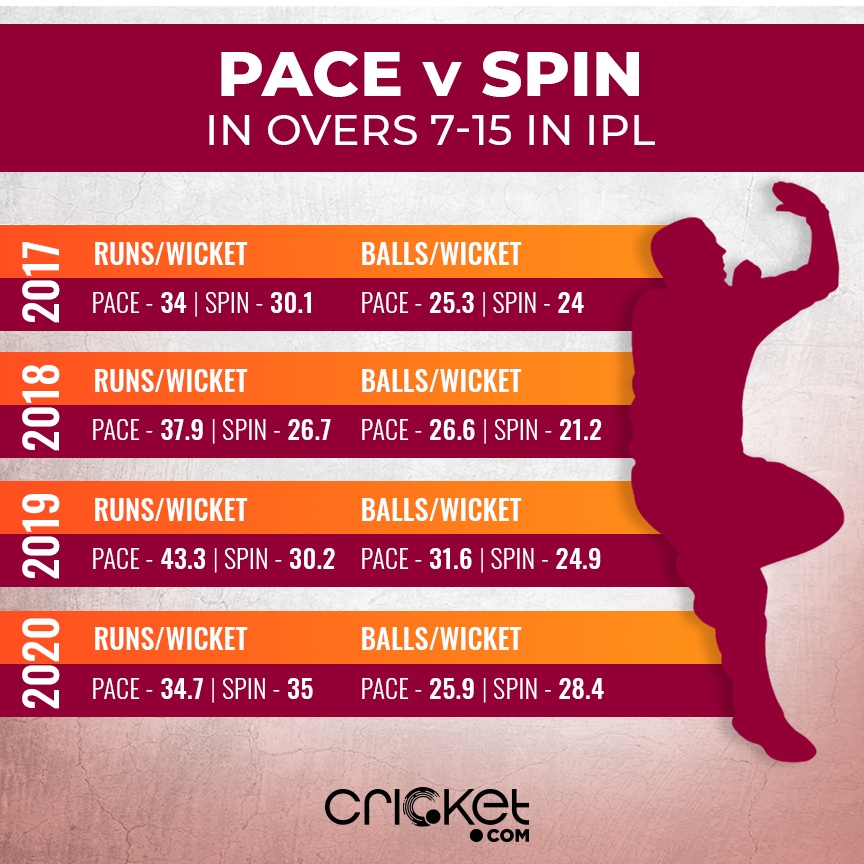 While the average and strike-rate for pacers is marginally higher than it was in 2017, 2020 remains to be the only edition in this timeline when pacers managed better numbers than spinners.

It is worth noting that the economy-rate during this phase this season was 7.4, which is pretty much similar to what it had been in the previous editions. Spinners were still able to cease the flow of runs. Ample turn was there if the bowlers ripped the ball, like Ravi Bishnoi’s googlies. However, wickets did not come. The difference was not the turn but the speed of it.

In the UAE, the ball turns but at a slower speed allowing the batsmen to adjust themselves. On Indian pitches, the ball grips, bounces higher with sharper turn, giving batsmen less to no chance to adapt. CSK’s home ground, Chepauk is a prime example.

Consequently, the spinners took a backseat this year in the wicket’s department. In 2018, Rashid Khan was at the second spot in the list of most wicket-takers. In 2019, Imran Tahir won the Purple Cap. This year, Tahir played only three games despite being available throughout the season. Although, it was due to CSK’s squad combination but they suffered the most due to the unforeseen behaviour of the pitches.

Having built a dynasty on the viciously turning pitches of Chepauk, they seemed helpless on the pacy tracks of the UAE. 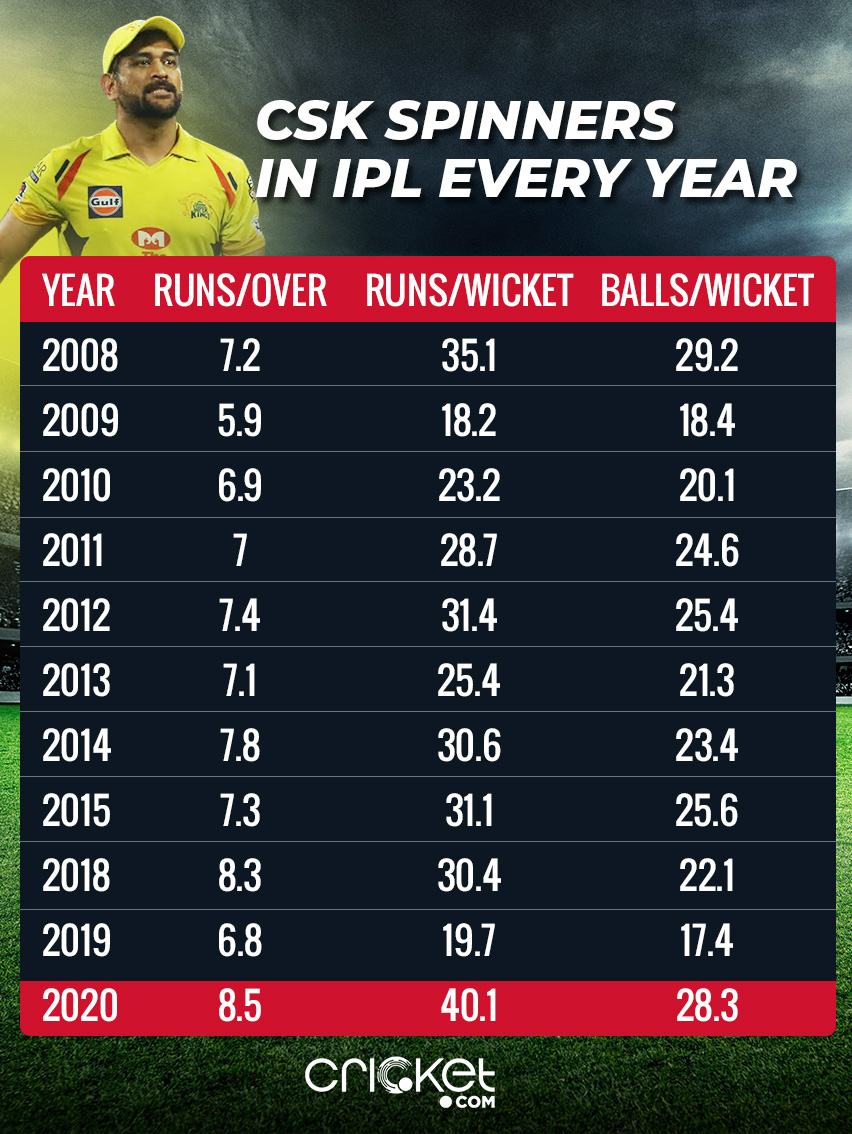 Ravindra Jadeja had one of his worst years with the ball averaging 53 runs per wicket and 36.3 balls per wicket - both second worst in a season. In other repercussions, a brilliant all-rounder like Mohammad Nabi could play only one game. In CPL 2020, he picked 12 wickets in as many games at an economy of 5.1 runs per over with his off-breaks. But acknowledging the nature of pitches, Sunrisers Hyderabad opted for a pace bowling all-rounder. After Mitchell Marsh was injured, Jason Holder took what was supposed to be Nabi’s spot prior to the tournament. Mujeeb Ur Rahman, the second highest wicket-taker in CPL 2020 went wicketless in his two games.

On the other hand, the finalists, Mumbai Indians and Delhi Capitals flourished. MI were able to continue with their strategy of two overseas pacers. The only vulnerability of their squad - a thin spin department - was never highlighted. Similarly, DC paired Kagiso Rabada with Anrich Nortje. The duo took 52 wickets between them.

The pitches were expected to slow down but even that did not happen. The track for the final in Dubai was lively. Only Sharjah slowed down with a considerable decline in the par score. 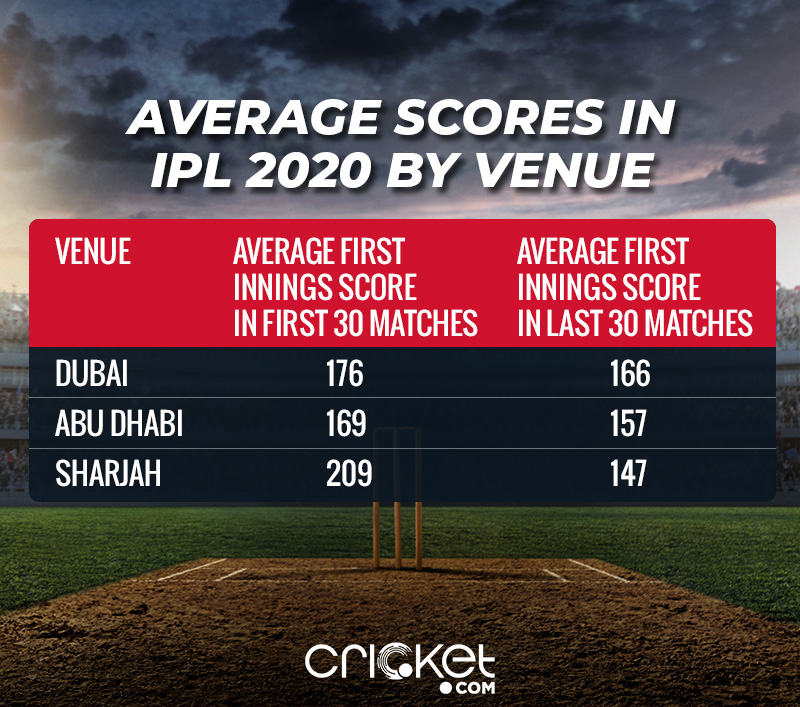 It is not only spinners who suffered. The contingent of pacers who relied on change of pace also faltered. For DC, Keemo Paul did not get a game and Harshal Patel tapered off. Daniel Sams, the highest wicket-taker in the BBL 2019/20 couldn’t pick a single wicket in three games. Jaydev Unadkat and Tom Curran were innocuous.

RCB bought Dale Steyn and Isuru Udana. Both were excellent in the Mzansi Super League prior to the auction. The South African pitches provided grip to their variations. In IPL, they were deserted of that additive. 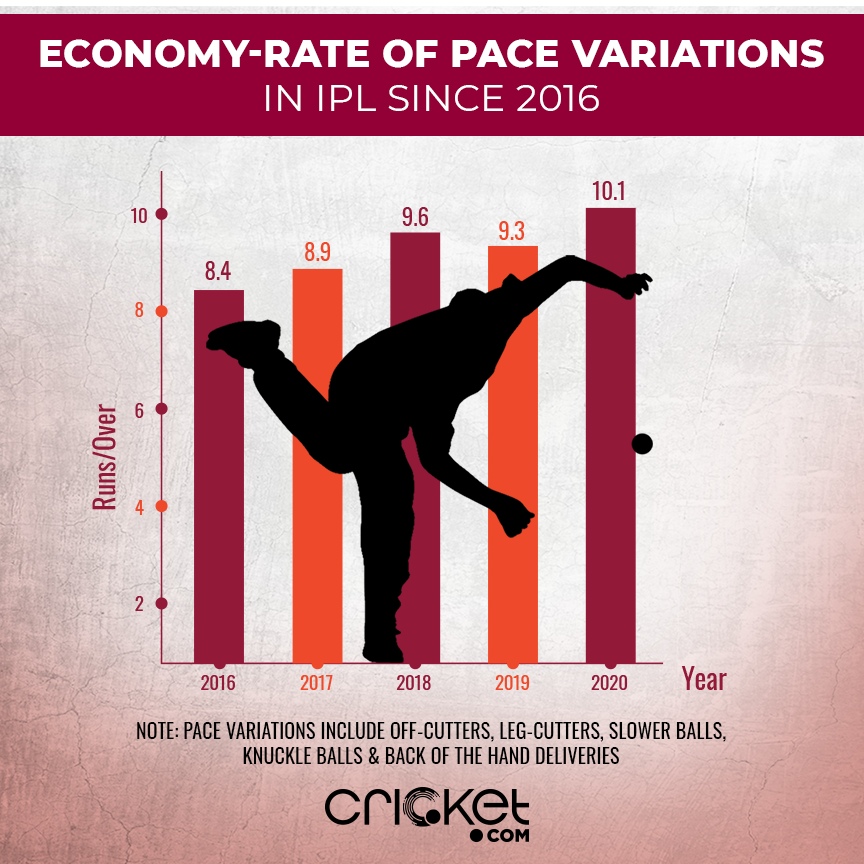 The assistance was only available at Sharjah but got neutralized by the miniscule size of the ground. Chris Gayle exploited it wonderfully in Match 46, though against the spinners.

A combination of true pitches and big grounds allowed the pacers with sheer pace or quality swing or both to populate the Top 10 wicket-takers list of the season. Rabada won the Purple Cap, Jofra Archer was the Most Valuable Player of the season despite his team finishing with a wooden spoon and Trent Boult levelled the feat of most wickets in the Powerplay in any season (16). Spinners bowled only 16.5 percent of overs in the Powerplay this year compared to 25.2 percent in 2019. Jasprit Bumrah gathered over 1,000 points in Criclytics MVP list of the season solely on the back of his bowling.

All these developments this year created the highest difference between the bowling average of pacers and spinners. 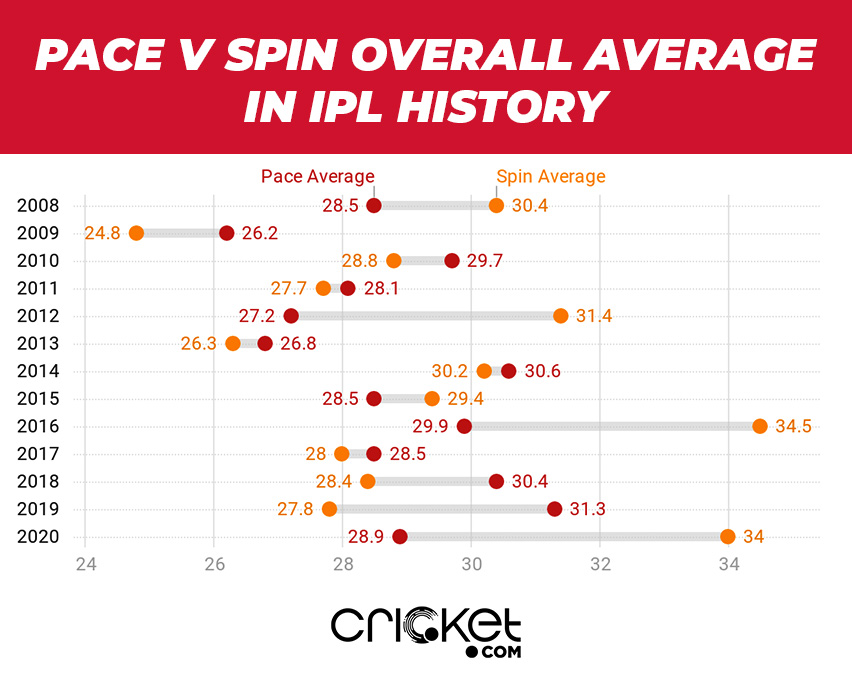 Hence, 2020 became an outlying season in IPL in terms of pace bowling. It was a kind of season we won’t likely be seeing anytime soon with the BCCI President, Sourav Ganguly asserting that the 2021 IPL will be staged in India.