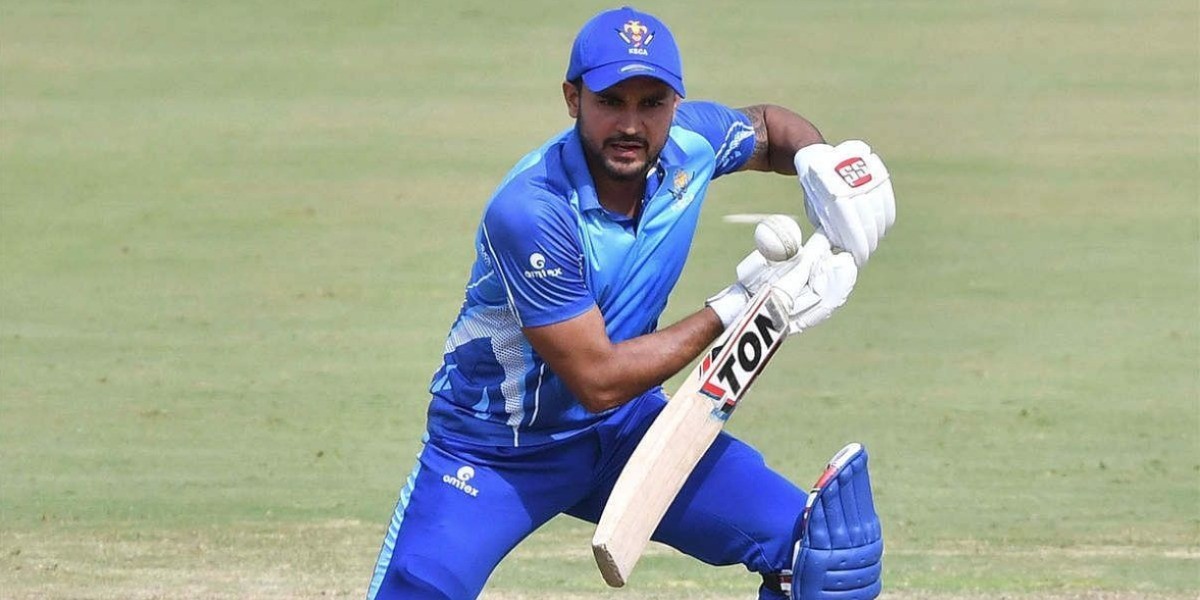 Deepak Hooda's 109 was the highlight of the day but unfortunately, it ended on the losing side

Karnataka rode on half-centuries from K V Siddharth (85 not out), skipper Manish Pandey (52 not out) and R Samarth (54) to sail into the quarterfinals of the Vijay Hazare Trophy with a comprehensive eight-wicket win over Rajasthan on Sunday. In other games, timely breakthroughs from Yash Thakur cleared Vidarbha's route with a 34-run win over Tripura. For Uttar Pradesh, it was Akshdeep Nath (78) and Rinku Singh (58 not out) that elevated the side to the quarterfinals' stage.

Bolstered by the return of K Gowtham, Devdutt Padikkal and Prasidh Krishna, Karnataka had Rajasthan in all sorts of bother at 19 for 5 in the eighth over. A brilliant counter-attacking knock of 109 by captain Deepak Hooda took the side to 199 but it was not enough. Karnataka cruised to the 200-run target with more than six over to spare.

Krishna struck the first blow, having the in-form Abhijeet Tomar, who has scored over 300 runs including a ton in the tournament, caught by Padikkal for 5.

Right-arm medium-pacer Vijaykumar Vyshak (4/22) scalped the next four wickets, including that of Mahipal Lomror (4). Rajasthan was staring down the barrel, losing half the side in the eighth over. Hooda, in at number four, rebuilt the innings with Samarpit Joshi. The two added 118 runs for the sixth wicket to give some hope.

Despite losing Joshi, Hooda continued with the attack and reached a well-deserved ton in 99 balls. He fell in the 41st over, stumped by S Sharath off leg-spinner Pravin Dubey (1/39). Gowtham finished the innings off by dismissing Khaleel Ahmed (0).

After Padikkal's departure for 4, Samarth and Siddharth added 75 runs in quick time to put Karnataka on the road to victory. Pandey then came up with an enterprising half-century and in the company of Siddharth, he added 100 for the third wicket to take the team home.

Pandey finished the match with a six off Ravi Bishnoi, who finished with none for 63 from 9.4 overs. Karnataka will take on Southern rival Tamil Nadu in the quarterfinals on Tuesday.

Batting first, Vidarbha rode on half-centuries by Yash Rathod (57 off 63 balls) and Atharva Taide (51 off 58 balls) to post a decent 258/7 on the board. They were then helped by another Yash, Yash Thakur who pouched a four-wicket haul as Vidarbha bowled out the opposition out for 224 in 49.2 overs. That despite a 96-run opening stand.

Thakur (4/45), grabbed three quick wickets and derailed the opposition. Tripura also had two run-outs in the process as they slipped to 164/6 in 38.3 overs and never recovered from thereon.

At the onset, Vidarbha lost in-form skipper Faiz Fazal (0) in the second over as the side was poised at 1/1. Taide and one-down Ganesh Satish (40 off 70 balls played steadied the innings with their 81-run stand. When it looked like the duo would score big, Amit Ali (1/42) trapped Satish in front of the wicket in the 22nd over.

They pegged back Vidarbha by removing a well-set Taide, who was caught by Bikram Kumar Das (61) off seamer Manisankar Murasingh (2/41). Vidarbha was in a spot of bother at 104/3.

Rathod and wicket-keeper Akshay Wadkar (41 off 59 balls) ensured that their bowlers had a total to defend. The duo added 92 runs for the fourth wicket. Courtesy their partnership, Vidarbha neared the 200-run mark. But Tripura struck twice again, removing both Rathod and Wadkar in quick succession.

Apoorv Wankhede (26) and Aditya Sarvate (25 not out) added 44 runs for the sixth wicket in just five overs, helping Vidarbha recover from 206/5 to cross the 250-run mark.

Chasing 259, Tripura were off to a fine start with openers Bishal Ghosh (44) and Das adding 96 for the first wicket. After Ghosh departed, former Gujarat batter Samit Gohil (32) joined Das, as the two added another 49 runs. But then Thakur struck in quick succession to turn the match head on. Darshan Nalkande (3/41) ran through the lower-order and scripted a memorable win for his side. Vidarbha will now face Saurashtra in the quarter-final on December 22.

UP edge past MP in close finish

Despite Shubham Sharma's responsible 83, Madhya Pradesh were bundled out for a sub-par 234 as UP bowlers wreaked havoc on their lower order.

Akshdeep Nath (78 from 92 balls) then anchored the chase and Rinku Singh (58 not from off 64 balls) gave the finishing touch as they saw their side home.

Put into bat at the Jaipuria Vidhyalaya ground here, Madhya Pradesh was teetering at 0/1 after ace speedster Bhuvneshwar Kumar (2/46) castled opener Abhishek Bhandari (0) in the first over.

Rameez Khan (35 off 68 balls) and in-form Shubham Sharma (83 off 99 balls) rallied the innings with their 73-run stand for the second wicket. The duo took on the Uttar Pradesh attack with gusto, while Rameez hammered four fours, Sharma's patient knock was laced with 10 boundaries. When it looked like the duo would score big, Khan was run-out in the 20th over, with MP poised at 73/2.

Sharma then found an able ally in the experienced campaigner Rajat Patidar (46 off 49 balls), adding 78 runs for the third wicket. While Sharma was the cynosure of eyes and toyed with the UP attack, Patidar, who came two-down, played the second fiddle. However, Shivam Sharma (1/47) castled Shubham in the 34th over to bring his side back into the game.

Once Patidar was sent packing by Shivam Mavi in the 41st over, the UP bowlers went gung-ho, snaffling the last seven wickets for 35 runs. Venkatesh Iyer, batting at five, contributed 30 to the total of 234.

Sameer Rizvi (38) and experienced Nath, who hit seven boundaries and a six, took the game deep with their 58-run stand for the fourth wicket. But Patidar ran out Rizvi as UP slipped to 101/4.

Nath, going strong at one end received support from the 24-year-old southpaw Rinku Singh. The pair added 97 runs for the fifth wicket and took the game away from MP. Once Nath fell in the 45th over, it was up to Rinku to see the side home. In company of Bhuvneshwar Kumar (16 not out), he ensured that the team chased the target with five balls to spare. With the win, Uttar Pradesh qualified for the quarter-finals of the national ODI championship and will now take on Himachal on December 21.