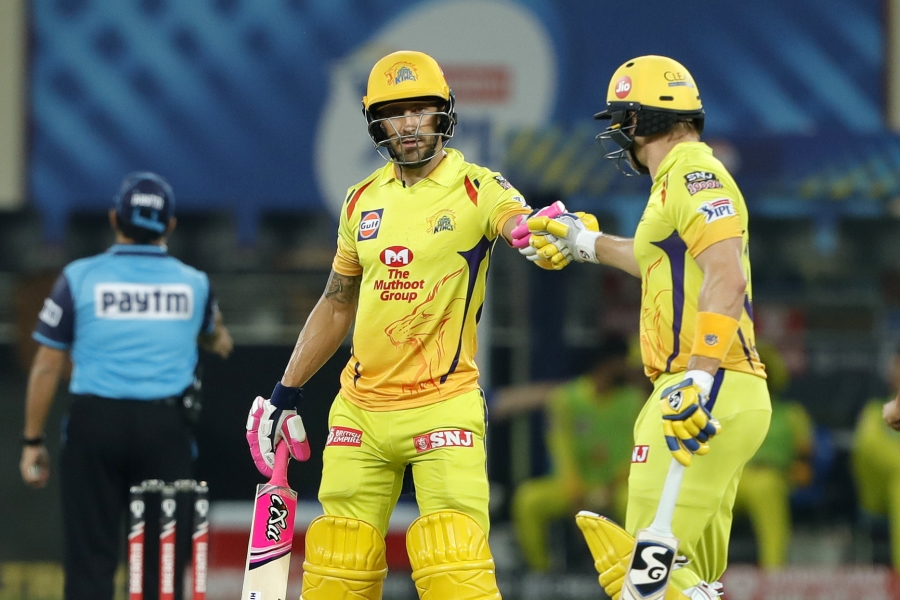 Here are a few noteworthy statistical nuggets - apart from the usual number-crunching -  from the double-header on Sunday (4th October).

Another milestone for a player who has set several records in the IPL. David Warner, stepped out to the toss for the 50th time as captain of Sunrisers Hyderabad against Mumbai Indians in the 17th match of IPL 2020. Probably not the expected result he would have wanted, but, he has been one of the most successful captains for Sunrisers. By virtue of that, Warner became the second overseas player to captain a team for 50 or more matches. Shane Warne with 55 matches as captain of Rajasthan Royals, is the other overseas player to lead a team in IPL for more than 50 matches.

It hasn’t been easy for bowlers to bowl at the Sharjah Cricket Stadium in this season of IPL. Almost every match, teams have been conceding a 200+ score. Unfortunately, it was Siddarth Kaul’s day of misery. Playing his first match of the season, Kaul was belted for 64 runs in his full quota of four overs. On a ground where a seasoned bowler has been struggling to get his lengths right, Kaul’s inclusion in this match was probably a bad choice. The 64 runs conceded is the fourth-highest for a bowler in IPL. Kaul went for nine fours and three sixes in his spell of four overs. 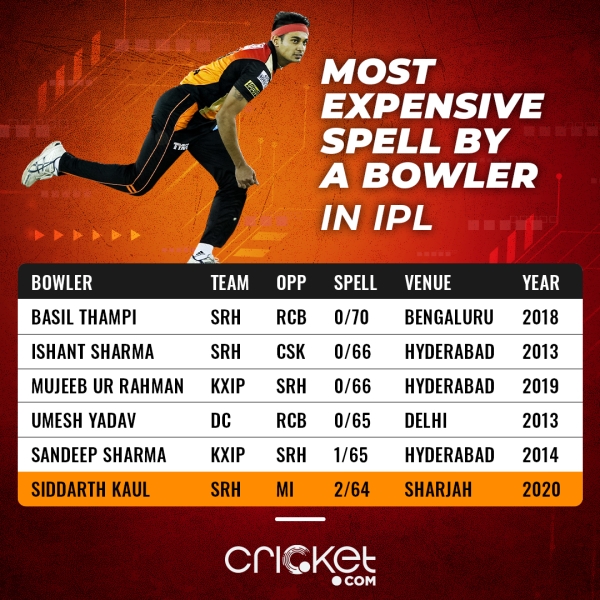 Sunrisers Hyderabad fail to post a 200+ total at Sharjah

After seven consecutive innings at the Sharjah Cricket Stadium, the chain of 200+ scores broke as Sunrisers failed to post a 200+ score. With almost every team fancying to chase even a total of 210+ with ease, Sunrisers never looked like they were in the chase after regular intervals of wickets. In their full allotted 20 overs, Sunrisers scored 174 for the loss of 7 wickets. Hence, they became the first team that failed to post a 200+ score at Sharjah. In fact, Sunrisers are the only team that are yet to breach the 200 mark in this edition of IPL. Today’s score is their highest to date in this season.

For a player who has set the fastest IPL half-century, this is not a stat that KL Rahul would want under his belt. In the 18th match against Chennai Super Kings, Rahul scored his half-century off 46 balls. In the first 30-balls, Rahul was very slow to start as he scored at a strike rate of 106.7. In an innings where he has faced 30+ balls, that is the slowest he has ever played in IPL since 2018. When he reached his half-century, Rahul became the slowest half-centurion for this season of IPL. Personally, that is his second-slowest half-century in IPL. Against Rajasthan Royals in 2018, Rahul had scored a 48-ball half-century which is his slowest. 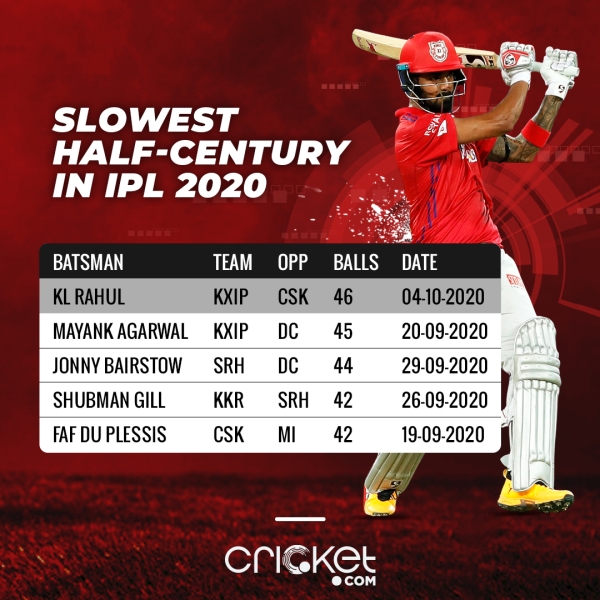 The legend has another record to his name in IPL, this time it is about MS Dhoni’s glovework. His quick hands and brainy glovework are something that is lauded by the whole cricketing fraternity. Dhoni with 139 dismissals, leads the list among wicketkeepers in IPL. However, when it comes to catches taken by a wicketkeeper, Dinesh Karthik with 103 tops the charts. When he took a catch diving to his right to dismiss Rahul, Dhoni became the second keeper to bag 100 catches in the IPL. 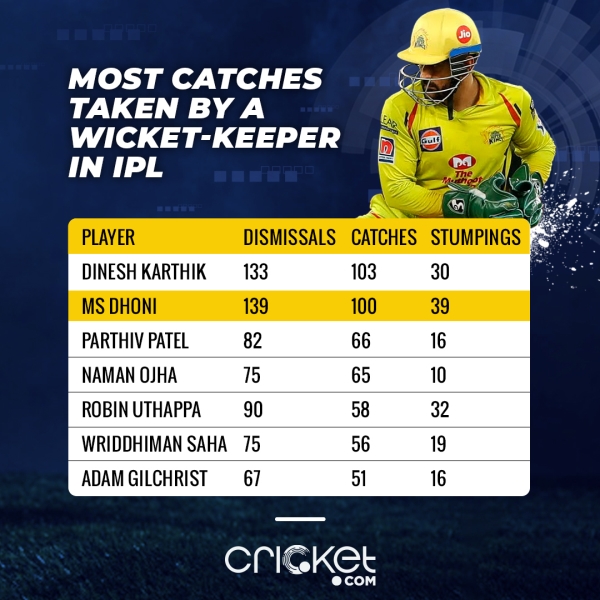 Apart from the match against Rajasthan Royals at the Sharjah Cricket Stadium, Chennai Super Kings' top-order batsmen never got going during the Powerplay overs in this season of IPL. Today, under pressure, the openers scored 60 runs in the first six overs without losing a wicket. Prior to this match, 53/0 against Rajasthan in their second match at Sharjah was their highest Powerplay score. Surprisingly, Faf du Plessis, who had a strike rate of 117.1 during the Powerplay overs prior to this match was in an aggressive mood. He smashed 32 runs at a strike rate of 188.2.

Prior to today’s match, there was immense pressure on CSK's openers. The opening partnership had scored 22 runs/wicket at a strike rate of 101.2, their strike rate was the lowest among all teams. However, Shane Watson and du Plessis applied themselves with all their experience to bail Chennai out of their woes. The Chennai openers piled on an unbeaten 181-run partnership to record their highest partnership for any wicket in IPL. Previously, in 2011 against Royal Challengers Bangalore, Michael Hussey and Murali Vijay had put on 159 runs for the first wicket, which was the highest for any wicket for Chennai then. 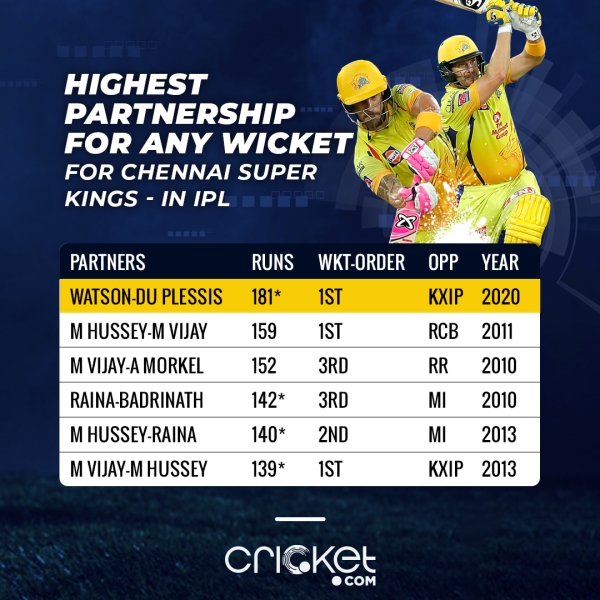 When a team needs a win desperately, impactful performances like these bloats the confidence of the team. CSK were in a muddle heading into this match with three successive losses. But, after what happened in the second innings, Chennai will look to bounce back strong. Set a target of 179 to chase, Watson and du Plessis took centerstage to showcase why they are world-class players. Chennai’s 10-wicket win in a chase of 179 against Kings XI Punjab is the second-highest target chased without losing a wicket in IPL. Kolkata Knight Riders had chased 184 without losing a wicket against the now defunct Gujarat Lions in 2017, which is the highest 10-wicket victory in IPL. 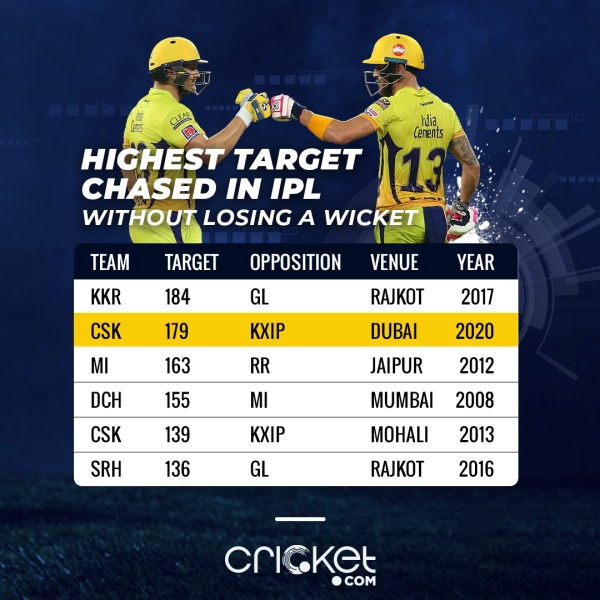 First team to win in a chase in Dubai

Finally, after seven matches, a team chasing wins at the Dubai International Cricket Stadium in the 2020 edition of IPL. Generally, teams in IPL fancy chasing, but, in Dubai it was a difficult task this season. Two teams had come close to winning in a chase, Kings XI Punjab in the second match and Mumbai Indians in the 10th match were able to force a tie. In any case, they lost the Super Over. Hence, handing wins to the teams defending. Chennai Super Kings defied the odds and chased a target of 179, that too, with complete authority.