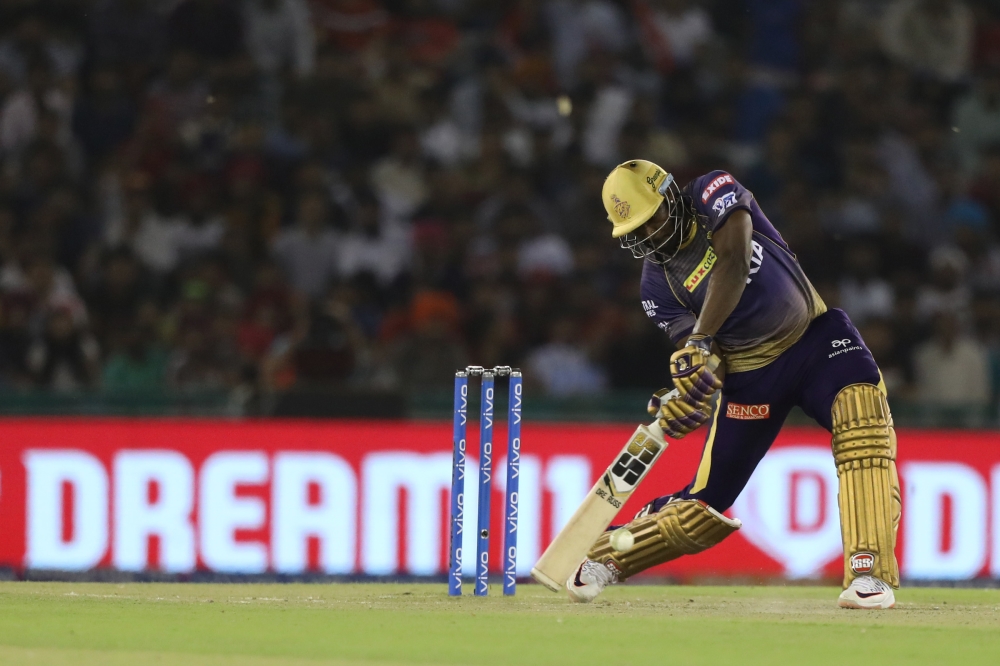 In terms of winning the Indian Premier League (IPL), Mumbai Indians (MI) are the most successful team in the league’s history, but they have built a reputation of being slow starters over the years and they lived up to that on Saturday as they lost the opening game of the 2020 season against Chennai Super Kings (CSK).

Meanwhile, Kolkata Knight Riders (KKR) will begin their IPL 2020 campaign with this fixture. The two-time IPL champions will be hopeful of putting behind the disappointment of failing to reach the playoffs last season and will be looking for a good start.

In 25 IPL contests between Kolkata and Mumbai, the latter have won 19 times – no team has won more matches against a single opposition in the league. KKR, in fact, have defeated MI just once in their last 10 clashes. 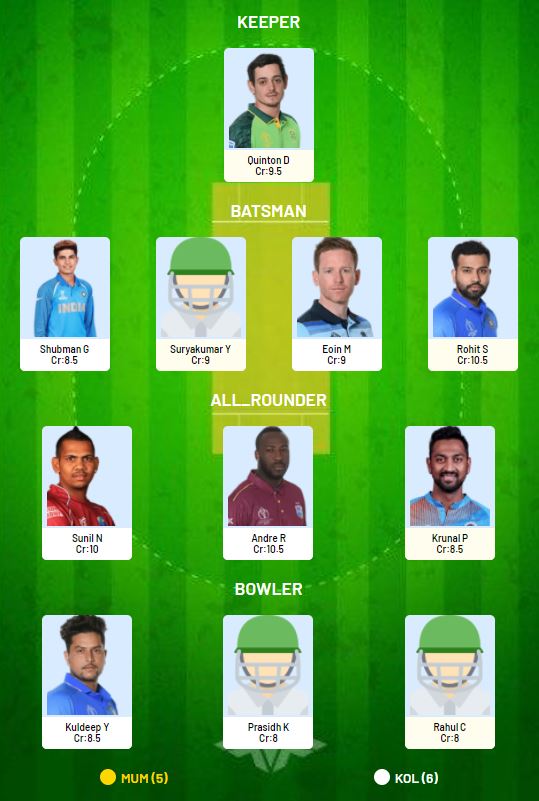 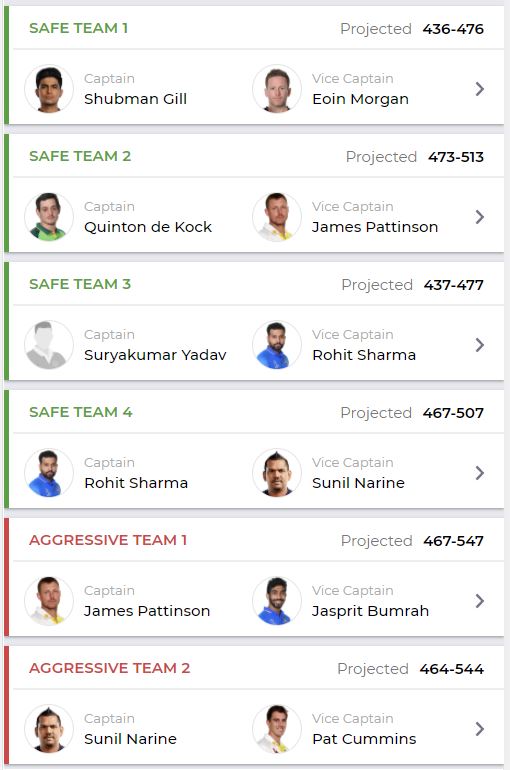 This will be the second match of the season at the Sheikh Zayed Stadium in Abu Dhabi, with Mumbai already having played at this ground this season.

While the average run-rate here has been the same as Dubai (7.4), more runs have been scored per wicket (23.4) in T20 cricket since the start of 2018. Interestingly, though, a wicket has fallen every 19.1 deliveries during the aforementioned period in Abu Dhabi, which is the best from a batting viewpoint among the three stadiums that are hosting matches this season.

In Saturday’s match, both teams scored at a run-rate of over eight, with two of Chennai’s batsmen notching up half-centuries. In total, 328 runs were scored with 14 wickets being taken from 236 deliveries. 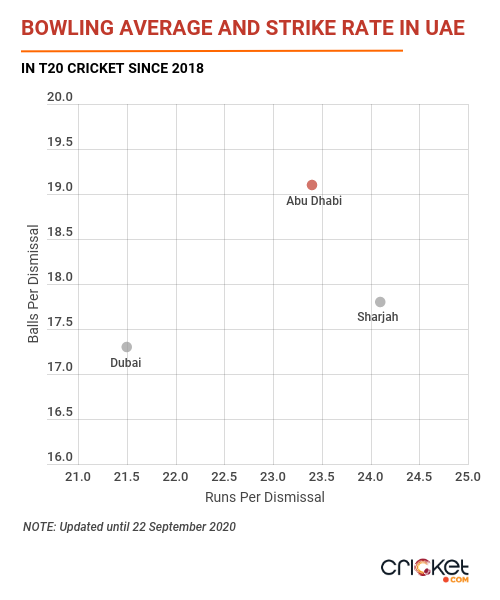 Just like the other two stadiums, spinners have a better economy rate but pacers take wickets more frequently in Abu Dhabi too.

Since 2018 in T20 cricket at this venue, fast bowlers have taken a wicket every 20 deliveries compared to a strike rate of 22.6 for the spinners.

It must be noted though that while over 60% of overs bowled in Dubai and Sharjah during this period has been by pacers, the percentage in Abu Dhabi is lower at 56.9. The percentage of wickets taken by pacers is slightly lower here (59.9) compared to the other two stadiums, where it is just over 65.

With Mumbai already having played one game, we have an idea of what to expect with regards to team selection. On the other hand, this will be Kolkata’s first game of the season and it’ll be interesting to see what combination they go for. Whether Sunil Narine is available or not could have a huge impact on this match, be it on the field or in fantasy cricket. 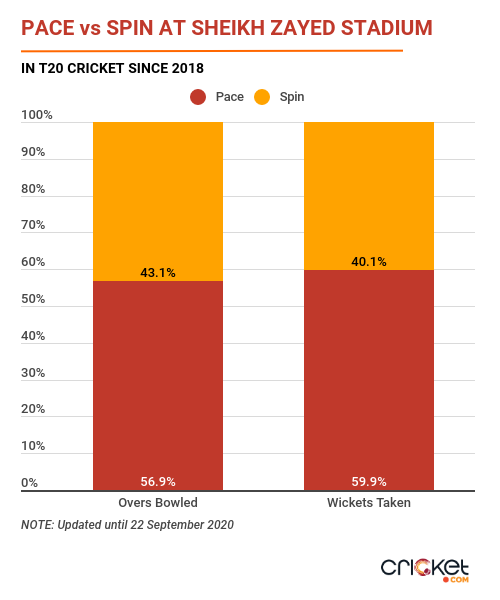 A good IPL season could bring Dinesh Karthik back into the reckoning as far as a national call-up is concerned. He will be looking to start well against Mumbai but should be wary of Krunal Pandya if the duo come up against each other. Krunal has dismissed Karthik twice in just 17 deliveries in T20 cricket so far. 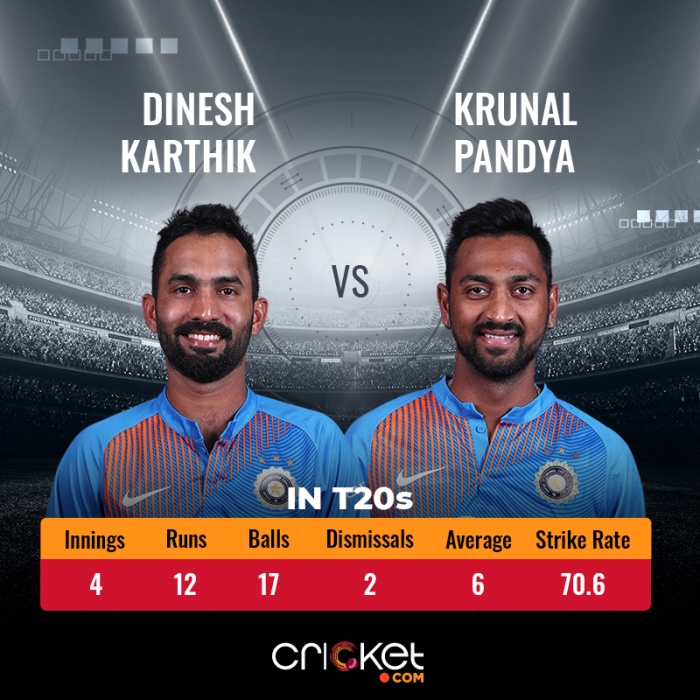 Andre Russell is, without doubt, one of the best T20 batsmen in the world currently and Mumbai will be hopeful that their premier bowler Jasprit Bumrah can shake off a below-par performance against CSK and be at his best against the KKR all-rounder. In T20 cricket, Bumrah has dismissed Russell once but has also conceded 49 runs from 33 deliveries. 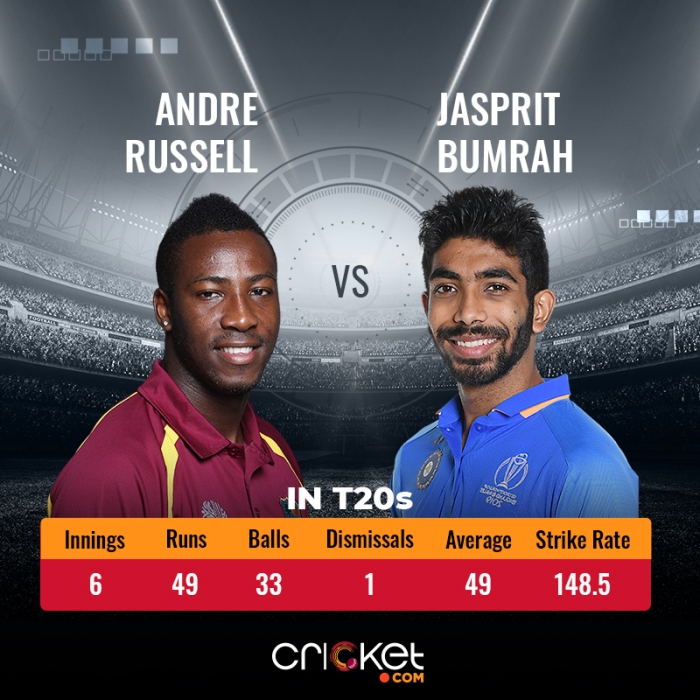 Rohit Sharma has had his struggles against spin in recent years in the IPL. Since 2017, he averages just 18.8 and has an underwhelming strike rate of 108.1 against spin in the tournament. The Knight Riders could attempt to expose this chink in Rohit’s armour by introducing Sunil Narine into the bowling attack early in the innings. As the numbers below show, Narine has done well against Rohit in the past as well. 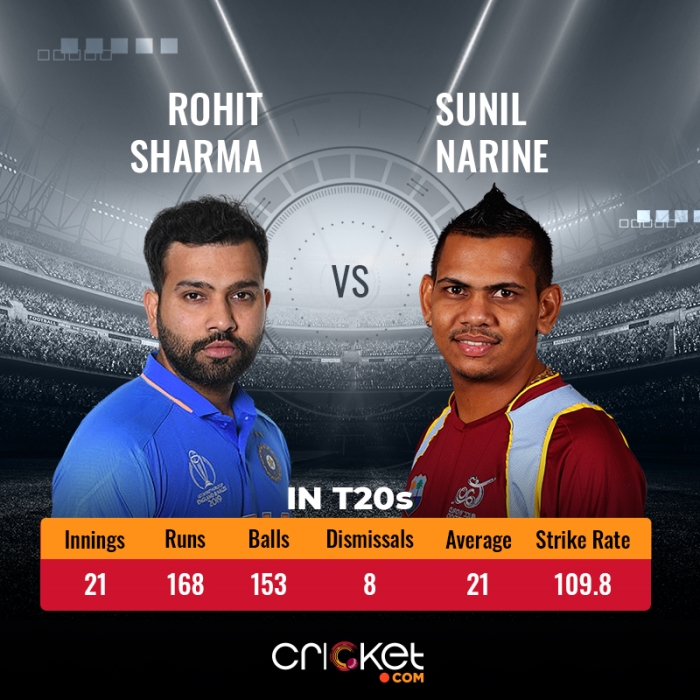 During the 2020 IPL auction, Pat Cummins became the most expensive overseas player in IPL history. The Australian pacer is expected to take the new ball for Kolkata and, as a result, is likely to be up against another international star in Quinton de Kock. The South African wicketkeeper-batsman has a strike rate of 145.4 and has been dismissed once by Cummins in T20 cricket so far. 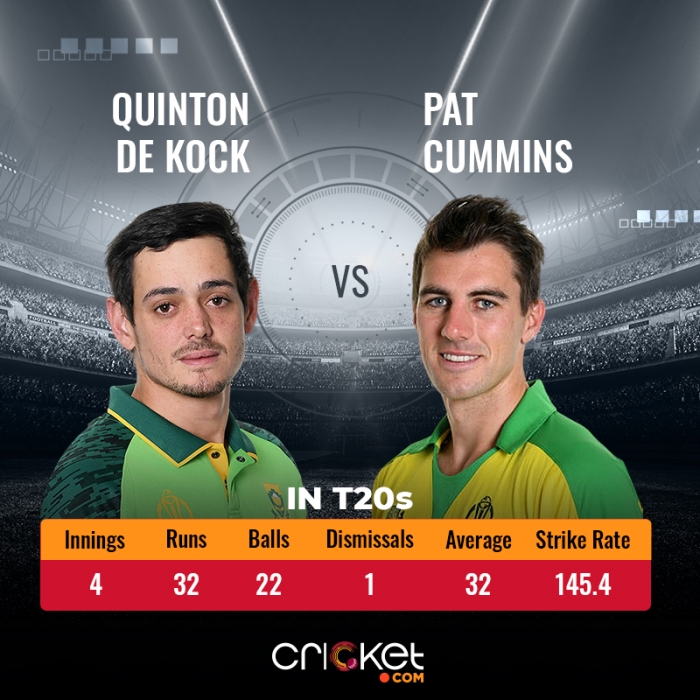 Andre Russell was the outstanding player of IPL 2019, eventually winning the Most Valuable Player award at the end of the season. He is expected to be KKR’s key player once again this season. Since 2019, he has a batting average of 41.1 in T20 cricket. But what makes Russell such a great player, especially in fantasy cricket, is his ability to score points with the bat and the ball. Last season in the IPL, while he scored 510 runs at an average of 56.7 and a strike rate of 204.8, he also took 11 wickets.

Our Criclytics player projector predicts Russell could score 6-15 runs and could take 0-1 wickets in this match.

Quinton de Kock got off to a start against CSK but couldn’t kick on and make a big score which would have been frustrating for him. Since de Kock joined Mumbai last season, no batsman has scored more runs (562) for the team than him – in fact, the second highest run-getter Suryakumar Yadav has scored 121 fewer runs which is a significant difference. He has 17 catches and two stumpings for MI in 17 matches too.

Our Criclytics player projector predicts de Kock could score 16-39 runs in this match. 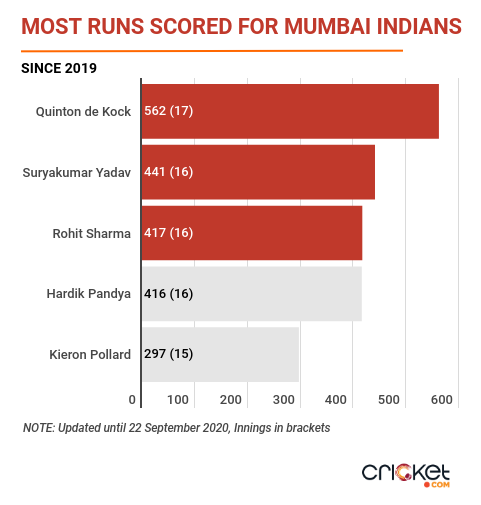 Sunil Narine missed the Caribbean Premier League (CPL) final earlier this month, so it remains to be seen if he is fit to start the IPL season. But if he plays, he is a player you can’t ignore in fantasy cricket. After all, how many players open the innings with the bat and almost always bowl four overs? The only concern will be that he has a batting average of just 5.3 against MI in the IPL.

Our Criclytics player projector predicts Narine could score 9-32 runs and could take 1-2 wickets in this match.

Krunal Pandya is another all-rounder you can consider selecting for this match. While he batted at number seven against CSK, he might come up the order depending on the match situation. MI skipper Rohit has often given the ball to Krunal during the death overs of the opposition’s innings which is a good thing from a wicket-taking perspective – between overs 16-20, Krunal has a bowling strike-rate of 9.8 in the IPL.

Our Criclytics player projector predicts Krunal could score 9-26 runs and could take 0-1 wickets in this match.