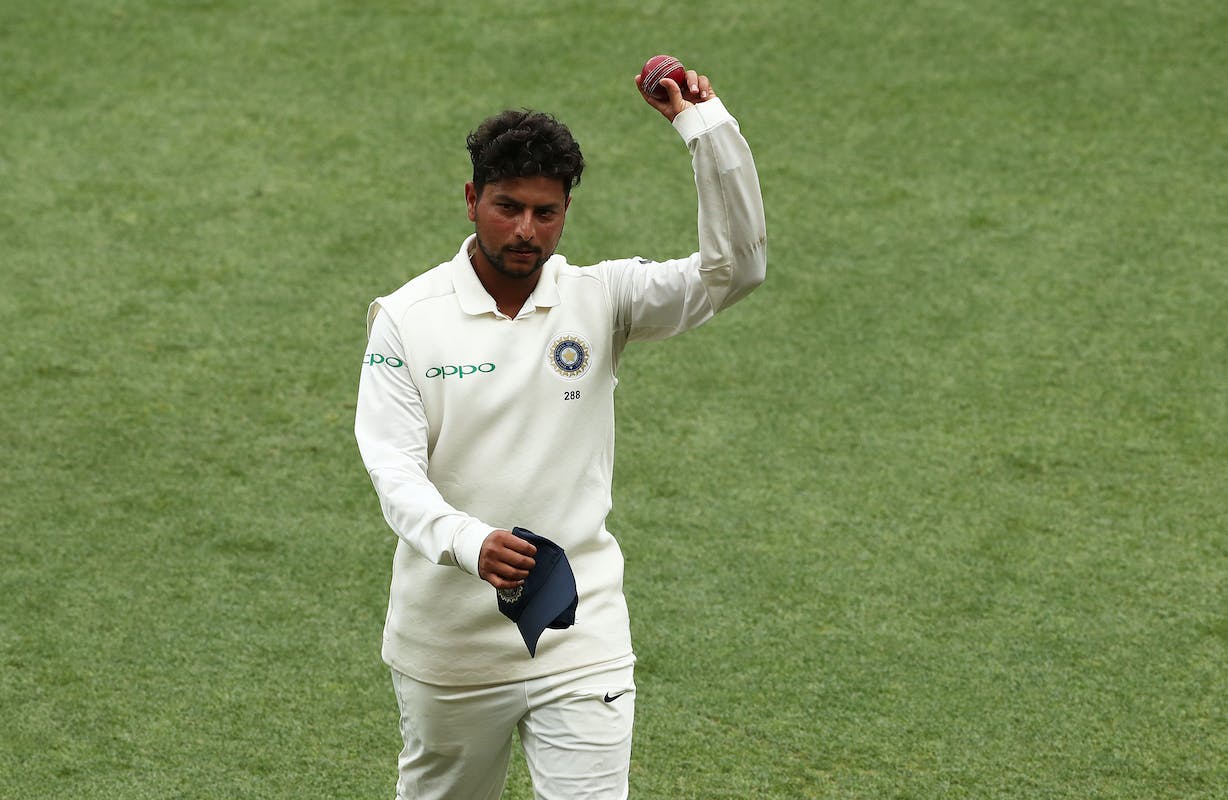 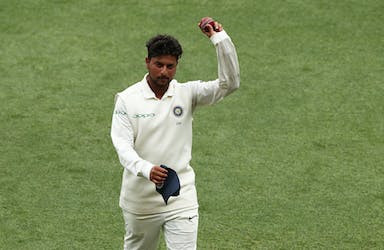 20 months after his last Test appearance, Kuldeep, in one of the most remarkable displays of spin bowling all year, bulldozed Bangladesh

Had India, on Wednesday, opted to hand Saurabh Kumar a maiden Test cap and play the Uttar Pradesh spinner ahead of Kuldeep Yadav, it would have been an entirely reasonable call.

In fact, logically, it made all the sense in the world to pick Saurabh in the XI.

Not only was the left-arm spinner already acclimatized to the conditions in Bangladesh, having spent a fortnight in the country representing the India ‘A’ side, he was in prime form. The unofficial Test series between India ‘A’ and Bangladesh ‘A’ concluded on December 9 and Saurabh dominated the two matches, picking 15 wickets at an average of 14.46.

The above were the first two things in his favor: familiarity with conditions and superior red-ball form compared to his compatriot Kuldeep, who hadn’t played a first-class game since the end of September.

The third thing in Saurabh’s favor was his ability with the bat.

India, mind you, were looking to replace Ravindra Jadeja and Saurabh, whose average in first-class cricket read 29.60 prior to the first Test, was a far more natural fit. He impressed in the ‘A’ series with the bat too, smashing a swashbuckling 55 off just 39 balls the only time he batted.

Though Kuldeep did have a first-class hundred to his name, it really was a no-contest when it came to a face-off with the bat in hand.

The only factor that was in Kuldeep’s favor was that he offered variety and a point of difference with the ball due to his relative mystery.

So Saurabh ticked three boxes, Kuldeep just one. But come the first day, the management decided to pick Kuldeep as they felt that he ticked the most important box.

On Thursday, the Indian management’s decision and subsequently their faith in Kuldeep’s ability was vindicated as the 28-year-old ran through the Bangladesh middle-order in brutal fashion. 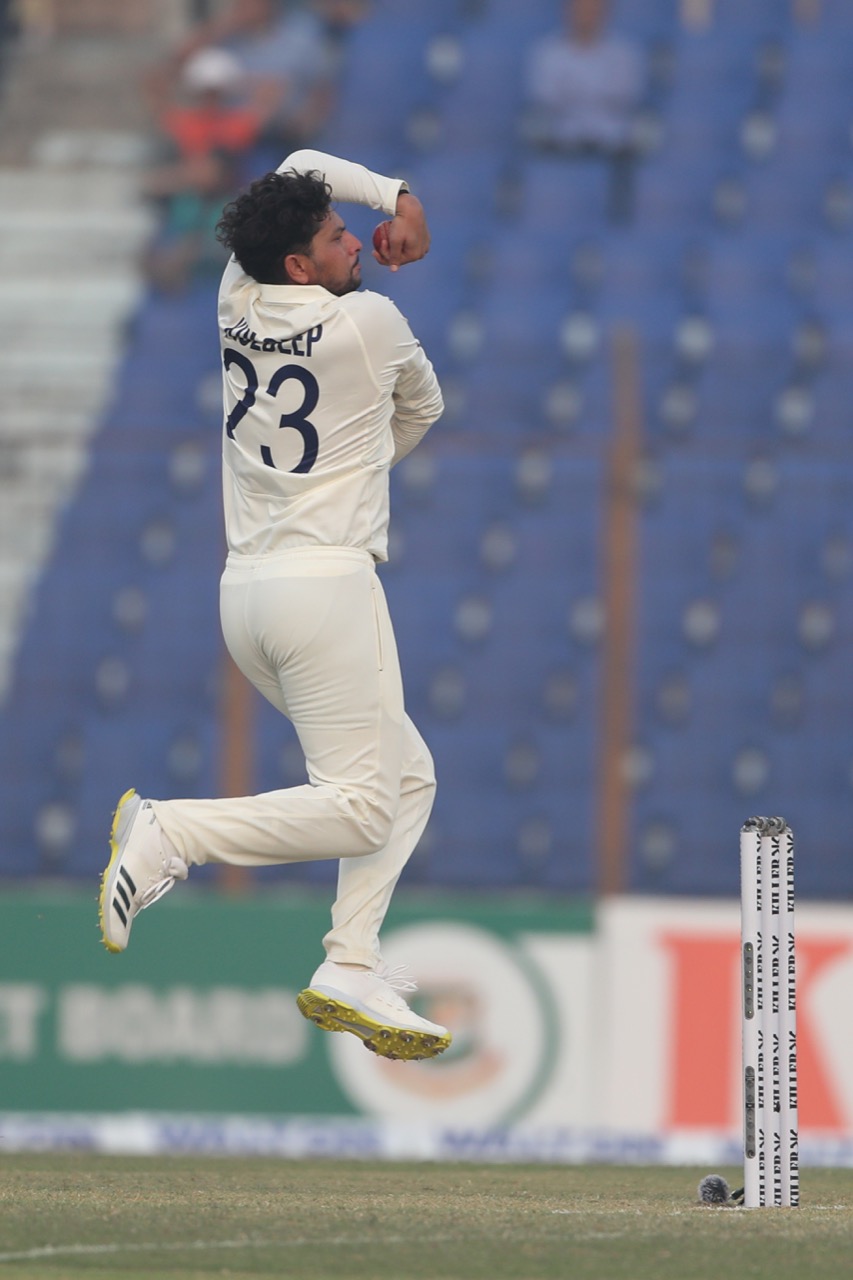 To be clear: neither did Kuldeep bust the game open for India on the day, nor did one particular wicket he took prove to be a turning point. At 75/4, Bangladesh were already on the ropes when skipper Rahul introduced Kuldeep into the attack and the hosts would, in all likelihood, have faltered eventually even if the wrist-spinner hadn’t done what he did.

However, the 10 overs Kuldeep bowled went a long way in showcasing the value an x-factor spinner like him adds to the side. In a matter of half a session, India went from being ahead in the Test to effectively all but winning it.

It is not often that you see Ravichandran Ashwin struggle, that too against a LHB dominant batting line-up, on a wicket like the one in this Test in Chattogram but Thursday was one of those days. The veteran, at least in his first spell, was uncharacteristically off-colour.

Rahul introduced Ashwin early, meaning the off-spinner bowled 8 of the first 24 overs of the Bangladesh innings, but the 36-year-old was largely innocuous. He beat debutant Zakir Hasan on the outside edge twice in his first three balls of the match, but then went about seven-and-a-half overs posing little to no threat.

In his post-tea spell, which comprised 7 overs, Ashwin drew less than 12% false shots, the Bangladesh batters managing a control percentage of 88%. This despite the veteran bowling nearly 74% of his balls in the spell to left-handers.

So while on one end the seamers were relentlessly testing the batters, the hosts, surprisingly, had respite on the other, where Ashwin was operating. This is something that tends to happen on SENA wickets but in the sub-continent? Against a LHB dominant side on a turning track? You rarely see it, if ever.

India had Bangladesh where they wanted but, bizarre as it may sound, they needed a spinner to deliver the knockout blow that Ashwin was not able to land.

We will never know what would have unfolded had Rahul not had the luxury of having a wrist-spinner in the side. But with Kuldeep at his disposal, Rahul decided to go for the kill and unleashed the wicked wrists of the 28-year-old.

What followed next was absolute annihilation.

In one of the most remarkable displays of spin bowling all year, Kuldeep bulldozed the Bangladesh batting as he picked 4 wickets in his first 36 balls to leave the hosts floored. For about 90 minutes in Chattogram, it was absolute carnage.

It took the wrist-spinner just two balls to strike as he had Shakib caught at first slip. He needed 23 more balls to add to his tally, but the wicketless 23-ball period was a phase in which he absolutely tormented the batters.

Sending Shakib back to the hut meant that Kuldeep had the luxury of bowling to two right-handers — Nurul and Mushfiqur — and boy he pounced on the opportunity. He turned the ball miles (absolutely miles), prudently used the googly and humiliated the two batters ball after ball, embarrassing them on both the outside and inside edge.

As if the turn wasn’t hard enough to negate, the inconsistent bounce on the wicket made life impossible for Nurul and Mushfiqur. So much so that at one point, it felt like the two batters had only two options at their disposal: either laugh, or cry.

Every ball was followed by a ‘oooh’ or an ‘aaaah’ and it was absolute chaos in the middle.

It would have been a travesty had Kuldeep ended the day with no more wickets, but justice prevailed as he was rightly and deservedly rewarded with three more scalps.

It is not uncommon for spinners to wreak havoc in such fashion on raging turners, but usually, in such cases, you see batters being troubled by every spinner. Astonishingly enough, that was far from the case in the final session.

On one end, you had Kuldeep making a mockery of the batters but on the other there was Axar, who created a grand total of zero opportunities. Barely a half-chance, even.

Axar bowled all his seven overs on the day in tandem with Kuldeep, but he drew just 14.2% false shots; the Bangladesh batters batted with a control percentage of 85.7% against the left-arm spinner.

In comparison, Kuldeep drew a mind-boggling false-shot percentage of 33.3%. He was head and shoulders above every other bowler in the Test. 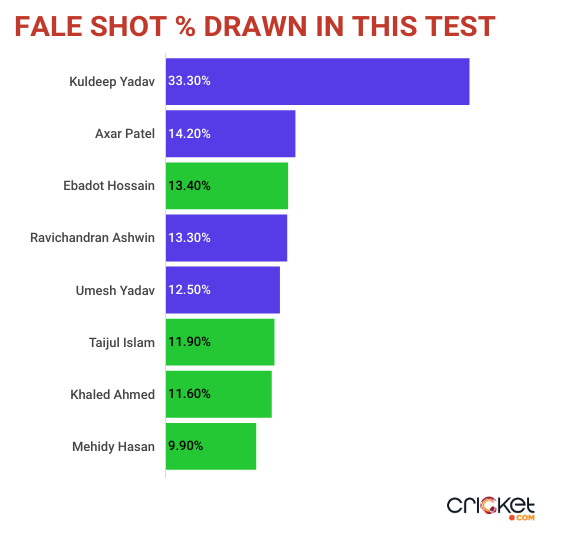 Forget this particular Test. Here’s just how good (and crazy) Kuldeep’s spell today was: in all Tests played so far in 2022, there have only been two instances where a spinner has managed to draw a similar or higher false-shot percentage than Kuldeep did today: Simon Harmer vs Bangladesh in Port Elizabeth and Nathan Lyon vs Sri Lanka in Galle.

In the case of both Lyon and Harmer, the opposition batters struggled against all spinners, their (spin) partners accounting for six and seven other wickets in the innings respectively.

Today in Chattogram, Axar and Ashwin were unable to strike even once in 17 overs, registering combined figures of 0/44.

All things considered, the 10 overs Kuldeep bowled today were right up there as the best by a spinner all year.

Only time will tell if this showing today from Kuldeep will turn out to be a mere wild one-off, or the start of a renaissance in red-ball cricket.  The management, and every Indian fan, would be hoping that it’s the latter, for it could be a potential game-changer for India in Tests.

As things stand, Axar Patel has the third-spinner spot nailed on for the Border Gavaskar Trophy, but if Kuldeep can find a way to churn out similar performances across the next three innings in this series, he’ll certainly have the management thinking. Particularly if he can also continue to be solid with the bat.

For as we witnessed today, having an x-factor, a point of difference in the XI is always invaluable.

Turns out, the management knew exactly what they were doing when they gave Kuldeep the nod ahead of Saurabh Kumar.