Drama at the end but CSK fall short by 7 runs 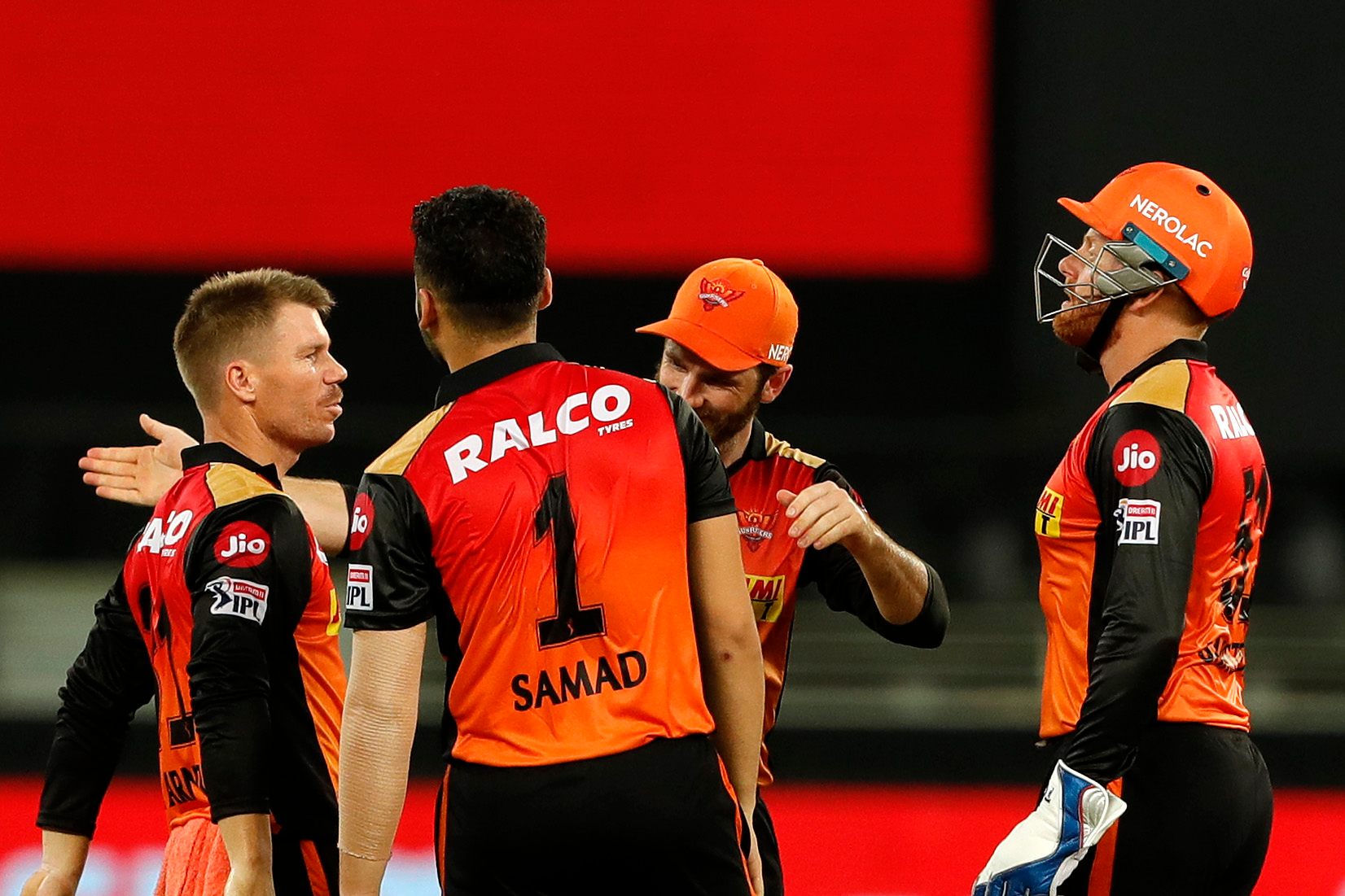 Drama at the end but CSK fall short by 7 runs

Sunrisers Hyderabad overcame their shortcomings to put up a spirited performance against Chennai Super Kings clinching two crucial points in Match 14 of the 2020 IPL.

At 69 for four in 11 overs after opting to bat first, SRH’s past performances in the competition suggested they are in a precarious situation. But the youngsters, Priyam Garg and Abhishek Sharma rose to the occasion. The duo added 77 runs from 48 balls instilling life into SRH's innings.

Chasing 165, it was the same old story for CSK. They had yet another poor start with the bat which made the target seem bigger than it actually was. Shane Watson and Ambati Rayudu were bowled within the Powerplay and their in-form batsman - Faf du Plessis - ran himself out ending the field restrictions on a disastrous note.

Kedar Jadhav vindicated the question marks on his spot on his way to a painful 10-ball 3. He lost his wicket to Abdul Samad who was bowling his first over in the tournament.

Before this game, MS Dhoni had a paltry strike-rate of 94 in the first 10 balls of his innings. Today, he scored only 4 runs off his first 10 balls. Ravindra Jadeja replicated him as CSK showed no intent during the middle-overs scoring only 43 runs off the nine overs. It was baffling from CSK when everyone in their XI were able to bat with a first-class fifty to their name. 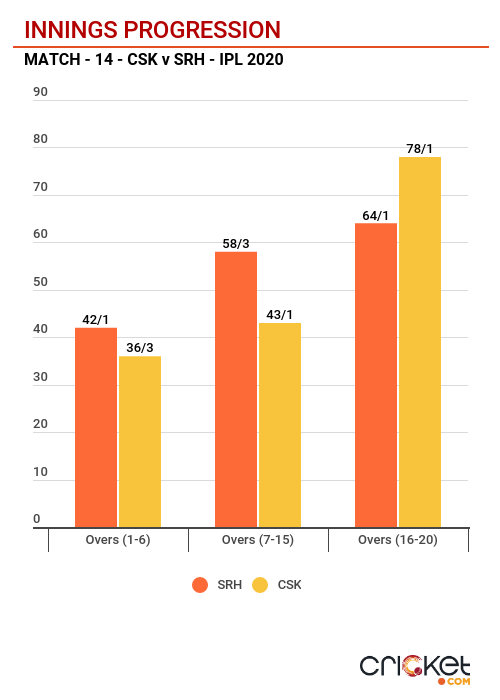 48.1 percent of the balls CSK faced during this phase were dots which played a decisive factor in the outcome of the game. By the time their batsmen opened the shop, it was too late with the required run rate as high as 19.5.

Jadeja scored a four off Natarajan in the 17th over (off an uncharacteristic dropped catch from Manish Pandey) before belting him for a six which brought his first IPL fifty. But that was the southpaw's last scoring shot as he was caught at deep square-leg in a failed attempt to stay up with the asking rate.

The over still brought 19 runs owing to a Sam Curran six but SRH were still ahead with the required run-rate soaring high at 22 for the remaining two overs. That is when the drama began. SRH lost their designated death bowler with Bhuvneshwar Kumar stretching his groin muscle.

This provided MS Dhoni with an opportunity to turn the tables around. However, maybe for the first time in his career, Dhoni looked out of gas in terms of both clearing the ropes and running between the wickets. Although, a six on the penultimate ball of the 19th over kept the deficit under reach for the last over - 28 runs.

Bhuvi's absence forced David Warner to bowl Samad in the last over. Five wides on the first ball further jeopardized the equation for SRH. But the CSK captain kept struggling for timing and the David Warner-led side ultimately took the game by 7 runs. Dhoni ended scoring 47 not out off 37 balls.

It was a disappointing loss for CSK knowing they had the wood over SRH in the first quarter of the game. Bowling first, Deepak Chahar knocked over Jonny Bairstow with an a beautiful inswinger.

Taking full advantage of the swing on offer in the first over, Chahar set up Bairstow following two outswingers with the incoming delivery. Bairstow, whose head was falling over the off stump in a desperate attempt to get off the the mark with a flick through mid-wicket, played all over to see the ball crashing into his stumps.

Despite a steady partnership between Manish Pandey and David Warner, CSK restricted SRH to 69 for four accounting for the batsmen who form the nucleus of their batting line-up.

Not known to be a team which allows the game to slip, CSK let Garg and Abhishek flourish. It was Abhishek who began the counter attack by bashing his counterpart - Ravindra Jadeja - for a four and a six off consecutive deliveries in the 14th over. Garg, though, turned it into carnage in the 17th over.

He destroyed Sam Curran for three consecutive boundaries (a six sandwiched between a couple of fours) with a conflation of classical and brutal hitting. There were 22 runs in the over (20 from Garg's bat). The six over the deep mid-wicket off a free hit took the cake which showed the distance Garg can send the ball to.

Abhishek was lucky in Chahar's over (18th of the innings) when he was dropped twice off consecutive deliveries on either side of the ground. However, Chahar did get his reward off the last ball when Abhishek knicked the ball to MS Dhoni.

There was no stopping Garg on the other end though. He completed his maiden IPL fifty in the next over and also became the youngest batsman for SRH to cross the fifty-run mark in an innings. The redemption for Garg was critical after he did not respond to Kane Williamson’s call which led to the Kiwi international’s run out just after Warner’s departure.

If Chahar got swing upfront, how could Bhuvi stay behind. A veteran when it comes to exploiting the lateral movement, Bhuvi was the first to provide SRH with the much-needed boost by sending Watson back. Consistently troubling him with movement, Bhuvi induced a false cut stroke off Watson's bat which clattered into his stumps off an incoming delivery.

Natarajan, in the sixth over, bowled a peach - pitched outside leg-stump and hitting the off bail - to get rid of Rayudu.

Amongst all the dismay, du Plessis still looked solid. With only 13 runs in the first four overs, he took charge in Khaleel's second over (fifth of the innings). He danced down the track to drive Khaleel through the covers before hoiking him over mid-wicket for three. Another boundary through a scoop shot helped CSK double their score in the fifth over.

However, his run out in the sixth over turned out to be a huge factor in the game sending CSK into a submission for a major part of their run-chase. It is evident that the current formula which is based on the success of the past is not working.

The defeat means CSK will continue to reel at the bottom of the points table. This is also only the first time when CSK have lost three of their first four games in a season since 2009. SRH, on the other hand, pounced on the opportunity to rise in the points table and have ascended to the second spot.