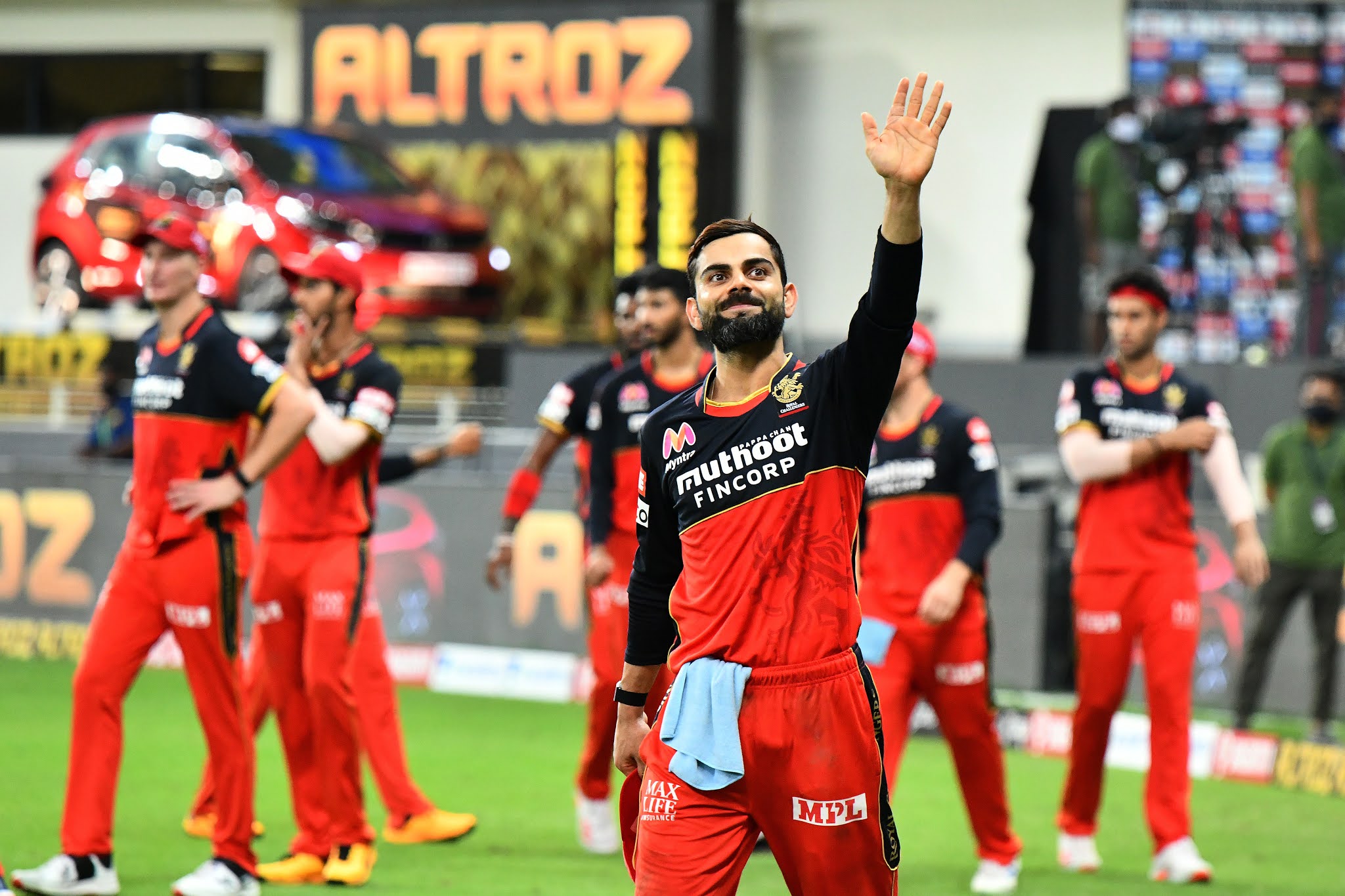 Before the tournament began, Virat Kohli talked about RCB’s squad this season being the most balanced ever. Up until now, this was not on the show as the familiar nemesis - their death bowling - continued to give them sleepless night.

In more ways than one, their heaviest victory against CSK will also be their most satisfying. First with the bat when after an indifferent tournament so far, Virat Kohli played an innings under pressure to propel the team to a decent total.

Then, with the ball, the new entree - Chris Morris - and four-match old Isuru Udana helped RCB gave away only 36 runs in the last five overs while taking five wickets.

Meanwhile, a consistent ailment hampered them with the bat. After their openers failed, their middle-order lacked aggression leaving too much for the batsmen to follow. In the end, they fell short by 37 runs in a battle that failed to live up to its hype over the years.

On a pitch that did not allow batsmen to be at their fluent best, CSK were on top of RCB for a major portion of their innings. But, such is the ability of Virat Kohli that once switched on, he can hurt any bowling attack. Along with the breath-taking strokes, it was his aggressive running between the wickets that left one wondering about the fuss of tough conditions in the UAE.

RCB were trailing in the game, having scored 95 in the first 15 overs. However, 48 runs added by Kohli in the next 19 balls helped RCB score 74 runs in the last five overs and end on a fighting total of 169/4.

Till the 15th over, with just three boundaries under his name, Kohli was 42 off 33 balls. The overdrive started with a pull off Shardul Thakur in the 17th over which helped him reach his fifty. Having got his eye in, Kohli feasted off Sam Curran and hit him for two sixes in the next over. For the first, he used his supple wrists to generate the power to cross the long-on fielder. For the second, he danced down the track to a decent ball angled outside-off and flicked it over square leg.

Charged up by now, Kohli was having nothing from Thakur who buckled under pressure. After Kohli creamed him over the long-on fielder, Thakur added to the growing list of beamers in this season.

While Bravo bowled a decent last over, Kohli made it memorable by shuffling to his right to connect a ramp to the fine leg fence. As soon as he was back on his feet, there was a wave to his fellow RCB batsman, to whose batting manual the shot belongs.

In a partnership of 76 off 33 balls, Shivam Dube contributed with a 14-ball 22 as well. He was the one who started off the carnage in the death overs with a four off Karn Sharma in the 16th over and then the first six in the 24-run 18th over from Curran.

In the first act of RCB’s innings, Deepak Chahar outfoxed Aaron Finch early on. Failing to read the movement on either side, Finch played and missed on four consecutive balls in the first over.

In Chahar's second over, opting for a deep point, CSK denied boundary options to Finch. Being on 2 off 8 balls, Finch attempted a hoick that left enough room between his bat and pads for the bowler to enter himself. However, it was the ball that moved in a fraction and uprooted his stumps to relieve him of his misery.

After Finch's dismissal, Virat Kohli and Devdutt Padikkal played with caution, ticking singles in the two overs to follow.

They broke the shackles in the sixth over, Thakur's first, as both the batsmen collected a boundary each. Padikkal made room to hit him past the point fielder off his first ball. Kohli then danced down and punched him through mid-off to hit his first boundary of the match.

RCB ended with 36/1 after the first six overs, their lowest total in the Powerplay this season so far. The noose on the RCB batsmen tightened in overs 7-15 as they scored at merely 6.56 runs per over but also lost three important wickets.

Two of these came in the same over as Thakur dismissed Padikkal and AB de Villiers, sucking the life out of RCB's innings then. Two quick wickets decelerated the innings further as Ravindra Jadeja chipped in with two quiet overs that also improved the abysmal over-rate in the tournament.

In at five, Washington Sundar did try to infuse some momentum after hitting a six off Karn. However, he departed in the 15th over as after de Villiers, another batsman offered an edge to Dhoni.

However, the script was to change as Kohli, after getting a measure of all CSK bowlers, pummelled them around the park while not missing out on turning ones into twos on most occasions.

A reply that never came

When it was their turn to bowl, RCB had adequate firepower with international bowlers like Chris Morris and Isuru Udana to go with Navdeep Saini,

Complementing the pacers, Sundar continued to exploit his golden-arm in the Powerplay. Bogged down by the pacers, both openers lost their wickets to the youngster, trying to go on the offensive.

Making full use of the longer boundaries in Dubai, Sundar lured du Plessis into a slog sweep that landed in the hands of deep square-leg, well short of the boundary.

In his next over, the sixth of the innings, Watson was early into the sweep as the ball rattled into his stumps. After some horror starts in the tournament earlier, 26/2 was CSK's lowest Powerplay score this season. 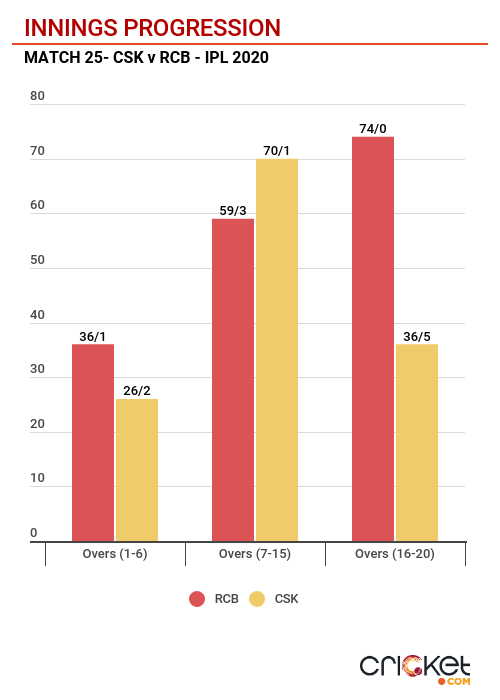 A characteristic lack of aggression followed the loss of early wickets. In the first six overs after the Powerplay, CSK added 37 runs, as the asking rate climbed to above 13.

There was an occasional show of intent especially from N Jagadeesan, who replaced Kedar Jadhav. He drilled Yuzvendra Chahal down the ground for a four in the 11th over. However, as a senior man, Ambati Rayudu seemed like going through the motions.

As if awake from a coma, the pair discovered aggression in the 13th over as Jagadeesan unleashed a sweep and a reverse sweep to fetch two boundaries off Chahal. What helped those shots was Chahal himself who teased the batsmen with flight and lack of pace, as if bored with the chase going nowhere.

Jagadeesan pulled Shivam Dube off the first ball of his spell in the next over to collect another boundary. Taking a cue from his rookie partner, Rayudu shifted a gear and hit a boundary each off Dube and then Saini in the next over.

A run-out in the 15th over ended Jagadeesan’s debut innings. At that point, CSK needed about as many as RCB scored in the last five overs but they did not have a settled Kohli in the middle.

With CSK lacking firepower in their lower-order, an asking rate of 14.8 in the last five overs was always going to be tough. They started on a positive note as MS Dhoni pummelled Chahal down the ground on the third ball of his innings. However, the end seemed imminent once he failed to clear long-off on the last ball of the same over.

Morris dismissed CSK's most aggressive batsman in the tournament so far as Sam Curran got a faint tickle while attempting a ramp. Udana all but ended CSK's hopes after he cleaned up Ambati Rayudu off a slower ball. While being CSK's top-scorer in the innings with a 40-ball 42, Rayudu's lack of aggression throughout his innings led the target to become far-fetched.

Morris then earned his rewards as he dismissed Ravindra Jadeja and Dwayne Bravo in the 19th over, both caught attempting big shots.

As most of the issues sorting themselves out with a balanced squad, RCB now seem capable of achieving bigger things this season. CSK, however, have a lot of assessment waiting for them in the near future.