MI beat KKR by 49 runs in a one-sided affair 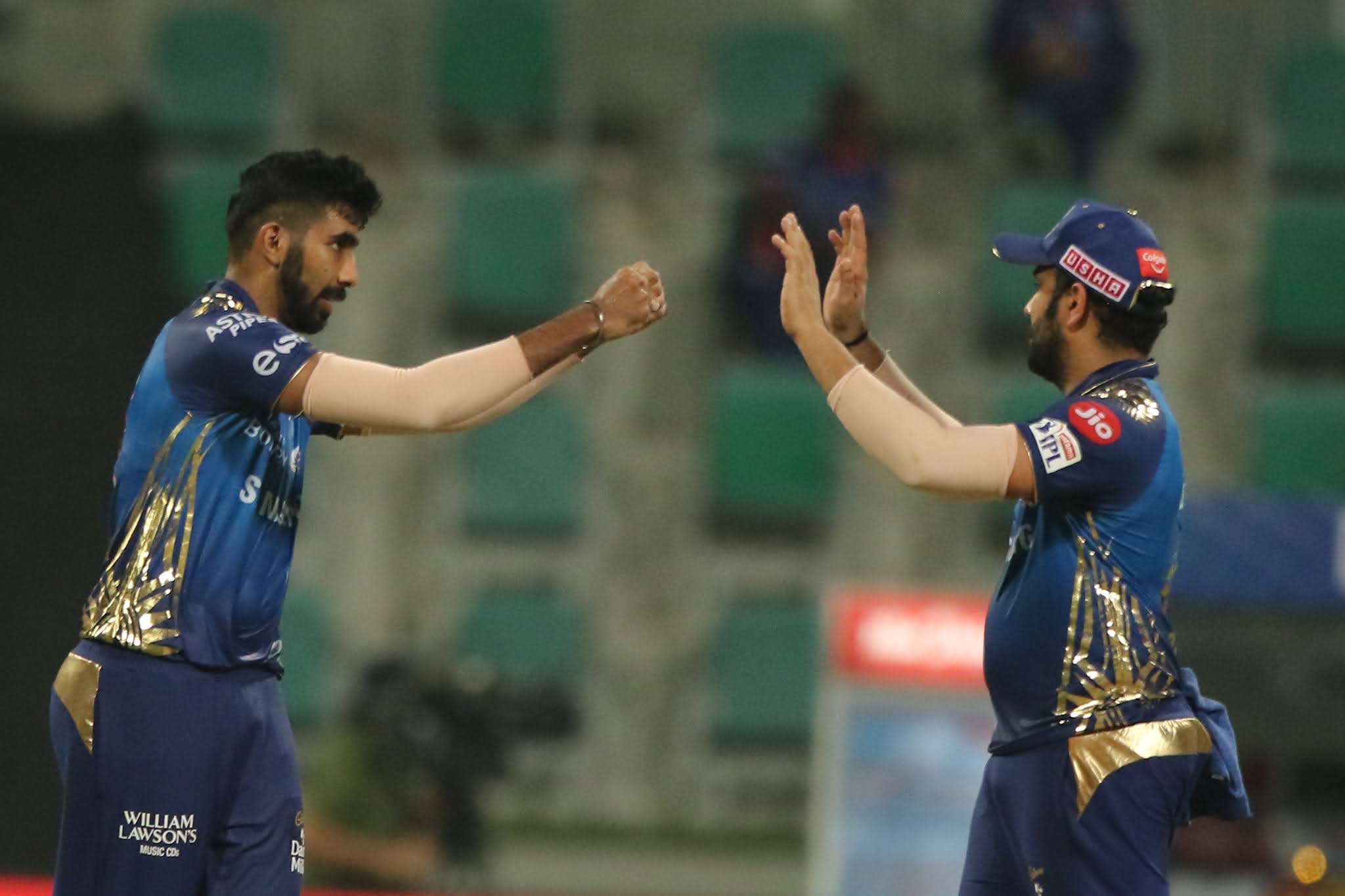 MI beat KKR by 49 runs in a one-sided affair

By now it is common knowledge that the Kolkata Knight Riders are Rohit Sharma’s favourite opponent in the IPL. Before this season, he scored 800+ runs against them at an average in excess of 40. Against no other team do his numbers come any closer.

Feasting on their bowling attack yet again, Rohit smashed a 54-ball 80 in a knock that included six sixes. Most of these hits were off lengths that are his bread and butter for six hitting – short either outside off or at his body.

With a 90-run stand with Suryakumar Yadav, who contributed a sublime 47, Rohit helped MI amass 195 runs in their innings.

KKR were the least impactful side with the ball in the last two seasons. Much of the expectations for KKR rested on the shoulders of Pat Cummins. However, he failed to hit the right areas and leaked 49 runs in three overs. Such was his ordeal that he did not complete his quota.

It did not help that both Cummins and Eoin Morgan came out of the quarantine just this morning. Both struggled in their respective departments and KKR did not look prepared for the contest.

Cummins did enjoy his turn with the bat, clubbing Jasprit Bumrah for four sixes in an over. However, the contest was over by then as Bumrah himself bowled an impressive spell to take his side to a one-sided win by 49 runs.

Bouncing back after a mediocre outing against CSK, Bumrah gave away only five runs in his first three overs. He sucked any fire left in the KKR run chase after accounting for Andre Russell and Morgan in the 16th over. However, with wickets at regular intervals and a lacklustre start, the asking rate was past 19 by then. 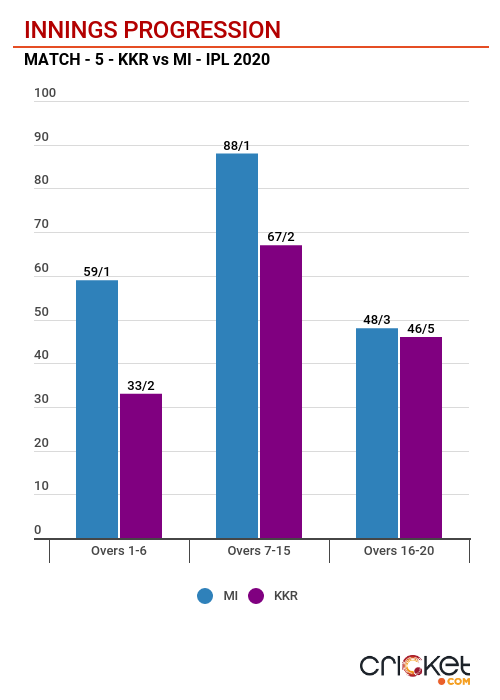 Coming out to bat after KKR opted to field, Rohit started with four dot balls in the first over by Sandeep Warrier. On the next ball he received a gift that he can hit even after years and not just months of quarantine. To a ball, short and wide outside off, he opened his arms to clear the square boundary on the offside.

Playing the IPL after 2018, Shivam Mavi started with 140+ straight away and bowled a wicket maiden upfront. After flourishing at the start in the first match, Quinton de Kock failed to make an impact today. To a rising ball, he toe ended the attempted pull to Nikhil Naik at the midwicket.

Suryakumar Yadav, in at three, was fidgety to start with. But, he hit Warrier for four boundaries in his next over to help MI move over de Kock’s dismissal.

Rohit treated Cummins with authority. Displaying his effortless six-hitting ability on the short ball, he pulled him for two sixes in his first over. MI completed their Powerplay domination after Surya used Sunil Narine’s angle to hit two boundaries on the leg side.

Rohit continued his aggression after the Powerplay to reach his half-century. As KKR continued to feed at his strengths, Rohit dampened Russell's bowling comeback. He hit the fourth six of his innings with another effortless pull off the short ball.

Kuldeep Yadav did not pick a single wicket in the middle-overs in 2019. Moreover, his economy rate was 8.4 in this phase. His struggle continued with an 11-run over to start with. Picking his googly, Surya danced down the track and executed a clean inside out hit over the cover fence.

KKR managed a moment to cherish on a forgetful day with the help of a run-out. Tucking a Narine's off-spinning delivery on the leg side, the duo ambled for a couple. However, Narine himself was quick to chase the ball and threw it to the non-striker end where Eoin Morgan collected and completed the run-out.

After two quiet overs, Kuldeep went down to Rohit's wrath. Well settled after reaching a half-century, Rohit clobbered Kuldeep to two sixes in the 14th over. One off a pull past deep mid-wicket, for the next he came down the track to hit over long-on. This was also his 200th six in the IPL.

Continuing to surprise his critics, Saurabh Tiwari batted with purpose. Dominating even Cummins this time he hit him for a four and six down the ground. The six was another shot in a display of picturesque strokes today as Tiwari cleared his front leg to time a length ball over the long-on fence.

After going for 11 runs in his first over, Narine came back to end with 22 runs in his four-over spell. His final over, the 16th of the innings, went for just one run. Moreover, it also resulted in a wicket for KKR after Tiwari mistimed a skier to long-off.

Struggling to find the right length, Cummins was once again too short. This time it was Hardik Pandya who took a toll against him. Unleashing the pull shot, twice he hit him for four to bisect the deep fielders at square leg and mid-wicket. After the second one missed crossing the fence by a whisker, Hardik clubbed the third to clear the same boundary with ease.

A low full toss from Mavi ended Rohit's innings. Looking to clear the fence, Rohit failed to clear an elated Cummins at long-on.

Russell, filling in for the wayward Cummins, bowled an excellent 19th over that resulted in just four runs. It also saw the back of Hardik. Probably no other batsman goes as deep in his crease as Hardik. This helps him to get under the deliveries at the blockhole in the fag end of the innings. However, the technique cost him his wicket in this match as his bat knocked off the bails on its way down.

Kieron Pollard helped himself to add 15 runs to his team's total in the last over the innings. While MI batsmen batted with purpose, the inexperienced KKR pacers bowled 10 wides between them.

Coming out to bat, KKR lost both their openers in the Powerplay. To add to their woes, they played out 23 dot balls in the first six overs. 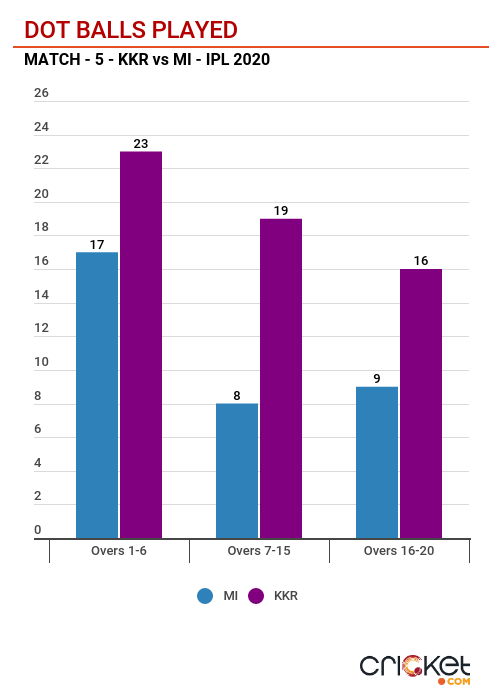 Unable to pierce the gap in the first over, Shubman Gill played out a maiden against Trent Boult. James Pattinson started with a slow bouncer against Narine, the length that makes him uneasy. Off the ball where he erred, Narine flicked him over the leg side boundary with ease.

As Gill looked like getting his groove back after a boundary to the offside, he hit a rising delivery off Boult to Pollard at mid-wicket.

Dinesh Karthik, promoting himself to three started with a silky cover drive off Boult. He hit Pattinson for another boundary on the offside in the fifth over.

Meanwhile, Bumrah rectified his errors from the last game and delivered a superb first over that cost only one run. Pattinson continued his short ball strategy against Narine who top-edged an awkward pull to Quinton de Kock.

Nitish Rana, in at four, hit Rahul Chahar in the last over of the Powerplay over long-off for a six. However, with 33 runs in the first six overs, KKR fell behind at the start.

The middle-overs failed to add any fuel to fire KKR's run-chase. With Hardik not fit enough to bowl yet, MI used only five bowling options in their first match. However, opting to use his options, Rohit introduced Pollard after the Powerplay.

Using cutters to good effect, Pollard bowled three inexpensive overs that went for 21. Moreover, he had Rana caught at the deep cover fence by Hardik to fetch himself the first IPL wicket since 2015.

Failing to make an impact in the first match, MI spinners did not start well. Both leaked two boundaries each in their first over. However, Chahar came back to fox Karthik - who missed a sweep - and caught him plumb in front. Beating Morgan on the remaining deliveries, Chahar ended with a one-run over when the asking rate was above 12. This is where MI started their chokehold on the KKR chase.

Giving only two runs off the bat in the 13th over, Bumrah bowled a combination of bouncers and slower balls to keep Morgan and Russell guessing. He almost reaped a reward after a bouncer to Morgan hit him on the chest and rolled to the stumps. However, the bails remained intact and he survived.

The asking rate climbed above 19 at the start of the last five overs of the KKR innings. While it seemed improbable even with Russell and Morgan at the crease, Bumrah made it impossible by dismissing both of them in the same over.

With no option other than to clear the ground, Russell played all over Bumrah's full ball that smashed into his stumps. Failing to display the typical flair associated with his batting, Morgan's struggle ended with a knick to the keeper.

Beating KKR by 49 runs, MI end their draught in UAE after six matches. In two consecutive matches now the side batting first has won the game with ease, giving the captains something to ponder on with their decision at the toss. 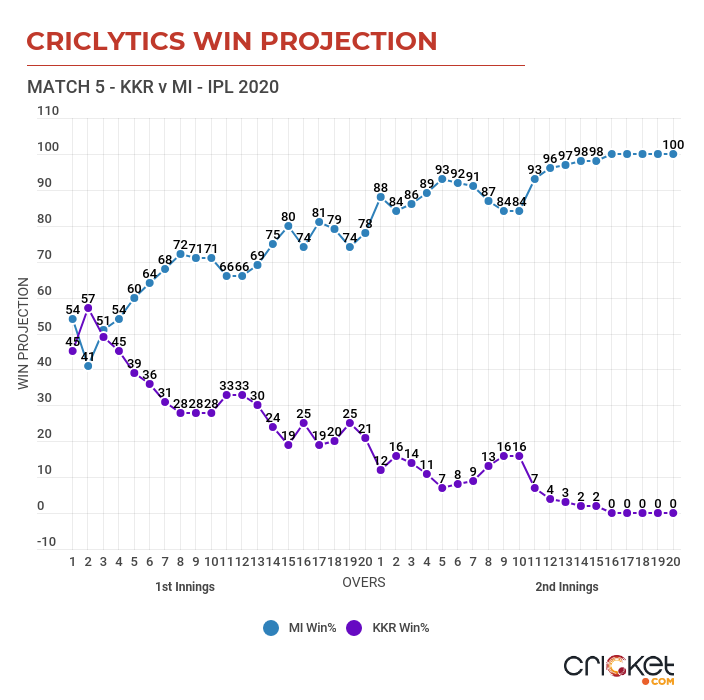 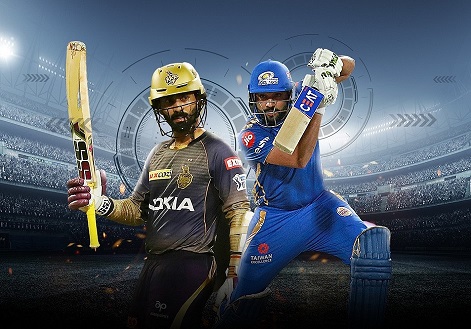