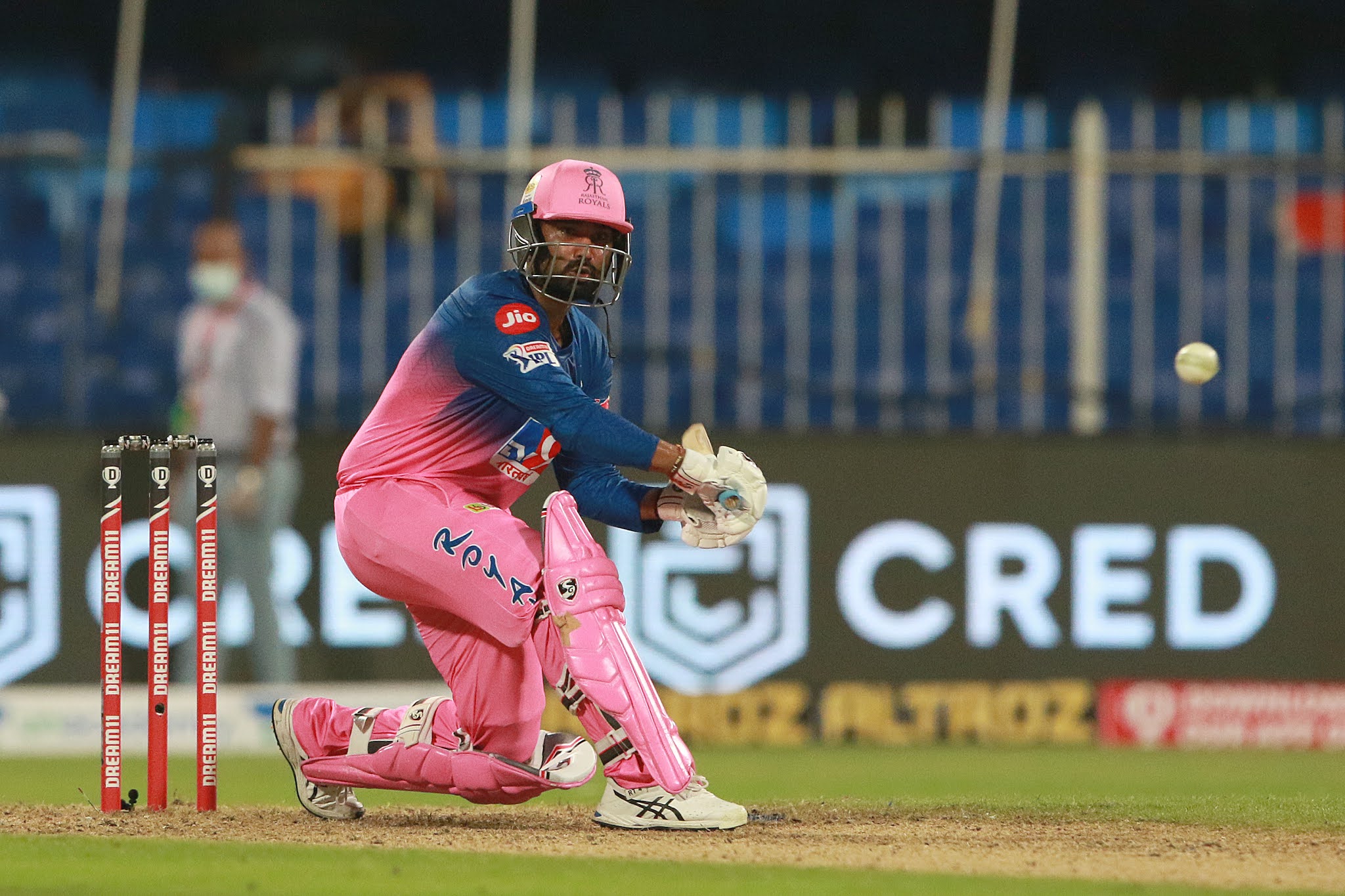 After Samson's 85, Tewatia hit Cottrell for five sixes in the 18th over to help achieve the highest IPL run-chase

For most people, it takes years for their life to travel a full circle. For Rahul Tewatia, it turned in a matter of minutes.

There was a position in the match when he was batting at 8 runs off 19 balls, failing to get bat to ball. As the asking rate climbed above 16 in the last five overs, the decision of promoting him became a subject of ridicule. With Sanju Samson playing breath-taking strokes from the other end, there was a unanimous belief that the decision to promote Tewatia will end up being the decisive factor.

Tewatia then displayed a performance that will make it difficult to question a decision or call a cricket match before it is over for some time to come. He hit 45 runs in the next 12 balls, blasting Sheldon Cottrell for five sixes in the 18th over, reducing the target to 21 off the last two.

In the end, a blitz from Jofra Archer helped Rajasthan cross the line to register the highest run-chase in the history of the IPL.

While Tewatia was the show-stopper, a fluent Sanju Samson anchored the RR innings in consecutive matches. He started where he left off. Clearing the straight fence with ease, hitting the spinners at will.

Showing an uncharacteristic maturity, even when RR were struggling when they added 48 runs in the seven overs from 9th to 15th, Samson did not lose his composure. He kept playing on merit while picking an odd-boundary whenever possible. In the end, it was his onslaught against Glenn Maxwell that sparked some life in the RR chase.

Earlier in the match, bowling predominantly to Tewatia, Glenn Maxwell sneaked in with eight runs from his first two overs. Opting to keep the strike to himself during his third over, the 16th of RR's innings, Samson hit Maxwell for three sixes in a 21-run over.

It was after Samson's dismissal, once it felt like RR are down and out, Tewatia chose to come out of the closet to play a memorable innings.

In the hindsight, KXIP's death bowling tactics were questionable. Neither Cottrell nor Mohammed Shami attempted yorkers or bouncers. There were too many length bowls as they imploded under pressure.

With an intent to prove his value as an opener, Smith batted with purpose. After Jos Buttler failed to make an impact, Smith added 81 for the second wicket with Samson. RR were 100 in nine overs by then and on par with KXIP. Unleashing his unorthodox strokes, Smith was impeccable in finding gaps on the leg side while thumping the full balls down the ground. 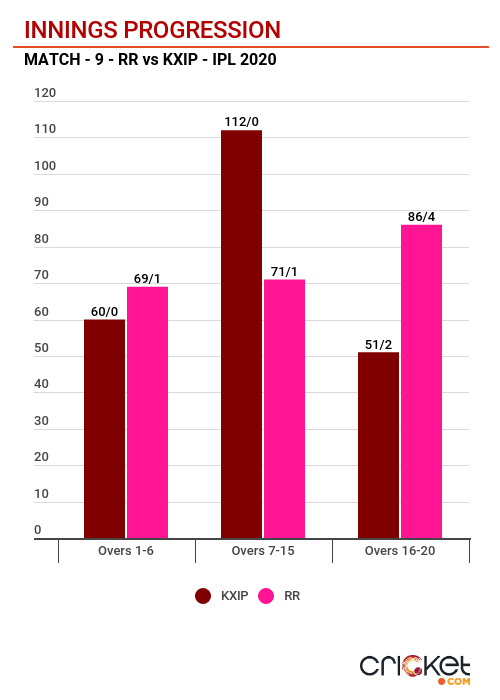 The match proved to be yet another heart-break for Mayank Agarwal. He had himself to blame after a breath-taking innings in KXIP’s opening encounter against DC. However, tonight he will struggle to point out a culprit.

As it seems like the two best friends at the top of the order for KXIP are alternating the carnage between themselves, it was Agarwal's turn to pulverize the bowling attack and he did so with a second-fastest IPL ton for an Indian.

When he announced himself at the international stage, it was clear that irrespective of the format, Mayank knows only one way to play spin: dominate.

Playing a T20, he has the license to bat as he pleases and this was not good news for the RR leggies. Reading the length early, getting back or dancing down the track as needed, Mayank was dominant on his straight hits that were pleasing to the eye. Aggressive all-round the wicket, he was immaculate to pick the gaps off his square shots on the leg.

In their first century stand in the IPL, KL Rahul was happy to play second fiddle to his friend. However, based on the outcome of the match, had Rahul been more aggressive than a 54-ball 69, KXIP could have built a bridge too far for the RR to cross.

Just like the KXIP pacers, RR’s too struggle to find their areas. However, their struggle was before the death overs began. Either too short or too full, Royals offered too many boundary balls to the in-form Punjab openers to start with.

After a sedate first over, Jaydev Unadkat became predictable with the short-pitched stuff by his second. A 17-run over where Agarwal picked a four and six for himself infused the momentum.

Jofra Archer took three deliveries to warm himself to bowl at the right channels. It was three balls too late for the Royals. Going by his stature, one would expect Archer to start with a delivery that pushes the batsman back. However, he chose to start with an off-cutter that also ended up being a half-volley. Dispatching it to the off-side boundary with ease, Rahul hit him for two more fours in the next two balls with an authority that stamped who the boss is.

After KXIP added around 180 runs in the first 16 overs, 51 runs in the last five overs was a decent comeback for RR. Having lost the plot early on, their pacers altered their tactics to target the wide line outside the off stump. The tactic helped as the KXIP batsmen added 22-runs in the three overs from 16-18. In addition to the declaration, the Royals had both the openers caught trying to clear the field.

However, RR could not end well. Length balls from Jofra Archer in the last over and low full tosses from Tom Curran in the over before helped Nicholas Pooran and Glenn Maxwell to smash 29 in the last two. With the late surge, KXIP swell their first innings total to 223/2.

In the end, the innings by Agarwal and his partnership with Rahul seems a blur in contrast to RR’s roller-coaster. After questions about Samson’s consistency, his innings tonight will instil a lot of confidence in RR set-up. As for their decision to promote Tewatia, all is well that ends well. 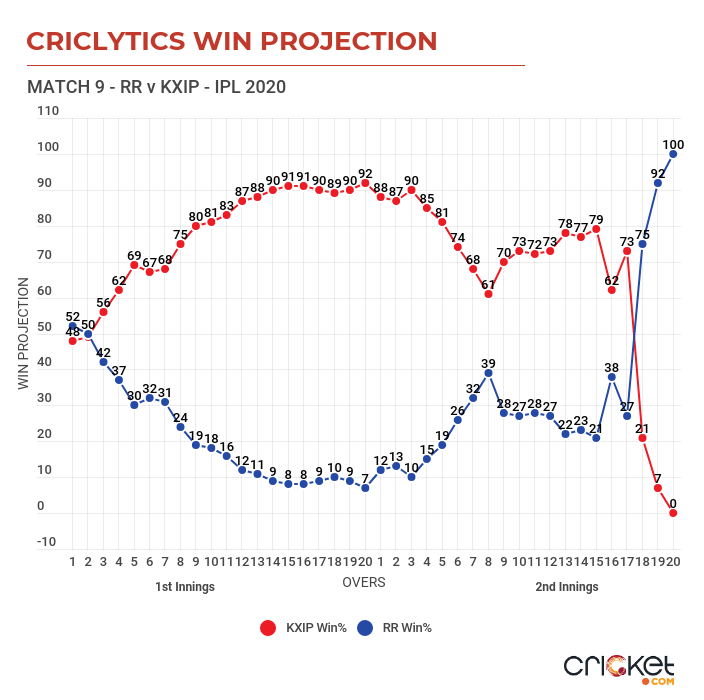 The 17th over of the 2nd innings changed the fate of Rajasthan Royals. The win projection jumped from 27 to 76 percent swapping position with Kings XI Punjab by the end of the over.