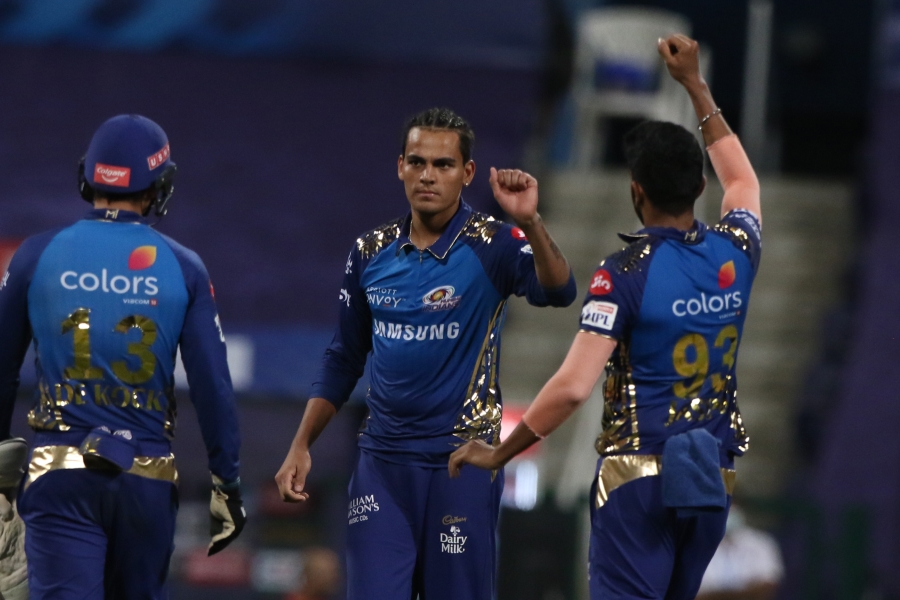 KXIP muddled up their XI

Before this game, KXIP were the most expensive bowling unit in the death overs with an economy of above 14. They ended up giving away 89 runs in the last five overs in this game as well.

It started all too well for them with MI reeling at 102/3 at the 15th over mark. There was a clear strategy to rotate their bowlers as there were 10 one-over spells in the first 15 overs. However, the plan for the phase which was their Achilles heal was shallow and it cost them the match yet again.

They made one change in their XI tonight, adding Krishnappa Gowtham in place of Murugan Ashwin. Even at the outset, this was a questionable move due to multiple reasons. 1) There was Glenn Maxwell in the side to fill the off-spinner's role. He did that well in the game against RR. 2) MI's more destructive batsmen are right-handers for whom, Ashwin would have been a better match-up given he is a leg-spinner. 3) KXIP needed a death-bowler and not a part-time off-spinner.

After Sheldon Cottrell completed his spell by the 13th over, the responsibility at the death fell upon Mohammed Shami, James Neesham and Gowtham. As it turned out, Gowtham bowled the last of those overs against a raging Kieron Pollard and Hardik Pandya who hit him for 25 runs.

Not that Shami and Neesham bowled any better. Both gave away 40 and 24 runs respectively in their quota of two overs each at the death.

After losing the plot yet again, KXIP never really got going with the bat and ended up 48 runs short of MI's total.

MI started slow but made up later

Earlier MI's opening woes continued as Quinton de Kock played around an away-swinging ball off Cottrell. The ball rattled his stumps as Cottrell started off with a wicket-maiden.

Rohit batted in style from the beginning. He treated a half volley from Shami as if batting straight after a long net session, hitting it sweetly past point and cover. Three balls later, Shami dropped it shot and wide to which Rohit stayed back and punched another four on the offside. Suryakumar Yadav continued the languid stroke-play for a while as he hit Cottrell for two crisp boundaries on the offside.

Just when the pair looked set, a run-out ended their stand. Rohit swept a ball from Ravi Bishnoi, who was on in the fourth over. He set off immediately while Surya did not anticipate Shami at short fine leg to reach the ball that quick and deliver an accurate throw. Shami proved Surya wrong as Mumbai lost their second wicket. Two wickets in the Powerplay did not stop Rohit's silky stroke-play. He spoilt Gowtham's comeback with two pleasing boundaries on the offside.

Run-scoring became a struggle for MI after the Powerplay as they scored 46 off the next eight overs. Rohit continued to find an odd-boundary but Ishan Kishan added 28 off 32 balls.

The fact that Rohit faced only 22 balls in the nine overs after the Powerplay did not help their cause. Frustrated with the lack of timing, Kishan slogged Gowtham straight to the fielder at the deep mid-wicket.

The arrival of Pollard tested the distance to boundary straight away. In the 15th over, he hit Bishnoi into the stands. Rohit continued the assault on the young leggie as he pulled him over deep-midwicket for a second six in Bishnoi's last over.

Rohit started the death-over phase with a bang. He hit Neesham for two sixes and two fours in the 16th over. Neesham's attempted yorkers ended up being low full tosses while Rohit dispatched the short-pitched stuff over the leg side fence.

Shami's first ball in the 17th over had everything a set batsman would wish for. It was full, it was just wide of the off stump. On another day, Rohit would have deposited it in the stands. However, tonight, he failed to clear Glenn Maxwell at long-off who lobbed it to Neesham at long-on before crossing the ropes.

MI scored 18 and 19 runs in the 18th and 19th over respectively. Facing his second ball, cramped for room and pace, Hardik managed to produce enough power to hit the ball against the wind over the straight boundary. To two other not so bad balls in the over, Hardik displayed the hidden strength in his petite frame to power boundaries on the offside.

Two outside edges, a slow bouncer and a full toss on the pads resulted in four boundaries in Shami's last over, the 19th of the innings.

After all permutations and combinations, the only option left for KXIP for the 20th over was Gowtham. With Pollard and Hardik at the crease, it smelled trouble and trouble it was.

After missing the first ball, Hardik deposited him in the stands. There would have been many who would have bet Pollard to clear the fence on every ball he faced in that over. And that is what he did. He hit the last three for sixes as neither bowling wide nor at his body worked for Gowtham.

KXIP never turned up with the bat

Coming to bowl while defending 191, MI pulled KXIP back in the Powerplay. After an indifferent tournament so far, Jasprit Bumrah delivered a telling blow by cleaning up Mayank Agarwal in the fifth over to break the most successful opening stand in the IPL so far.

Knowing the prowess of these two batsmen on the offside, Rohit opted for a fielder at deep-point early on. Brought in after expensive first three overs by Trent Boult and James Pattinson that cost 33 runs, Krunal Pandya put the breaks with a 4-run over.

While Mayank and KL Rahul played fluent strokes to Boult and Pattinson earlier, they were indecisive against Bumrah. After a flurry of dot balls, Mayank attempted an expansive drive that crashed into his stumps. Krunal ensured MI had the last laugh in the Powerplay after Karun Nair, in at three, played on.

While the 68 runs added in the nine overs of the Powerplay do not seem mediocre but when the asking rate is above 16, it is not impressive either. 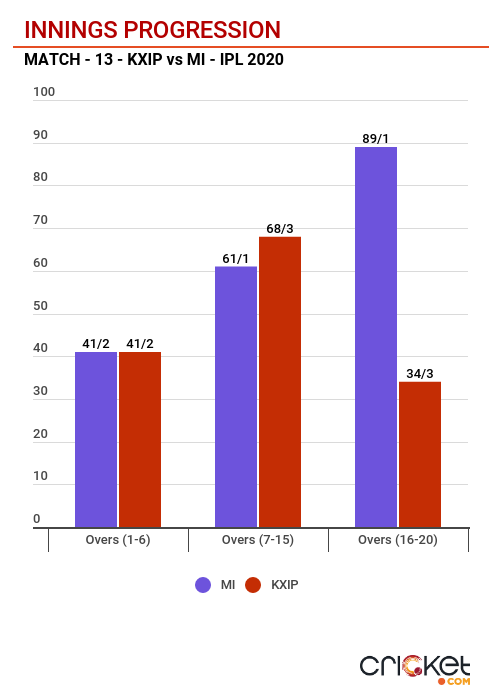 There was a spark on a couple of occasions when Nicholas Pooran hit Rahul Chahar and Pandya over the leg side fence for two sixes. But, with no support from the other end, KXIP kept falling behind the game after every over.

Rahul failed to make an impact after he missed a lap shot off Chahar as the ball crashed into his stumps. It was yet another struggle for Maxwell who hit a scratchy 18-ball 11. MI mixed their pace and spin in the middle-overs. After an expensive first over in the Powerplay, Pattinson came back with two good overs. To add to his credentials, he dismissed a threatening Pooran having him knick the ball to de Kock while attempting a drive.

Chahar added to Maxwell's misery in the 15th over after he top-edged a slog sweep to deep-midwicket.

It was never going to be easy after KXIP lost their four main batsmen before the death overs began and with the asking rate climbing over 16. As it turned out, their lower-order provided no life to their chase.

They managed to score 34 runs in the last five overs. MI pace troika was thorough in the death overs while they scalped three wickets as well.

For MI, this was a near-perfect game with spinners and Jasprit Bumrah being miser and among the wickets.

The same does not apply for KXIP. After four games, Nair and Sarfaraz Khan have batted 14 and 20 balls respectively. With one win in four matches now, it is imperative for KXIP to go the KKR way before it is too late. They should focus on boosting their bowling attack instead of going with a lengthier batting line-up and a plethora of part-time bowlers.