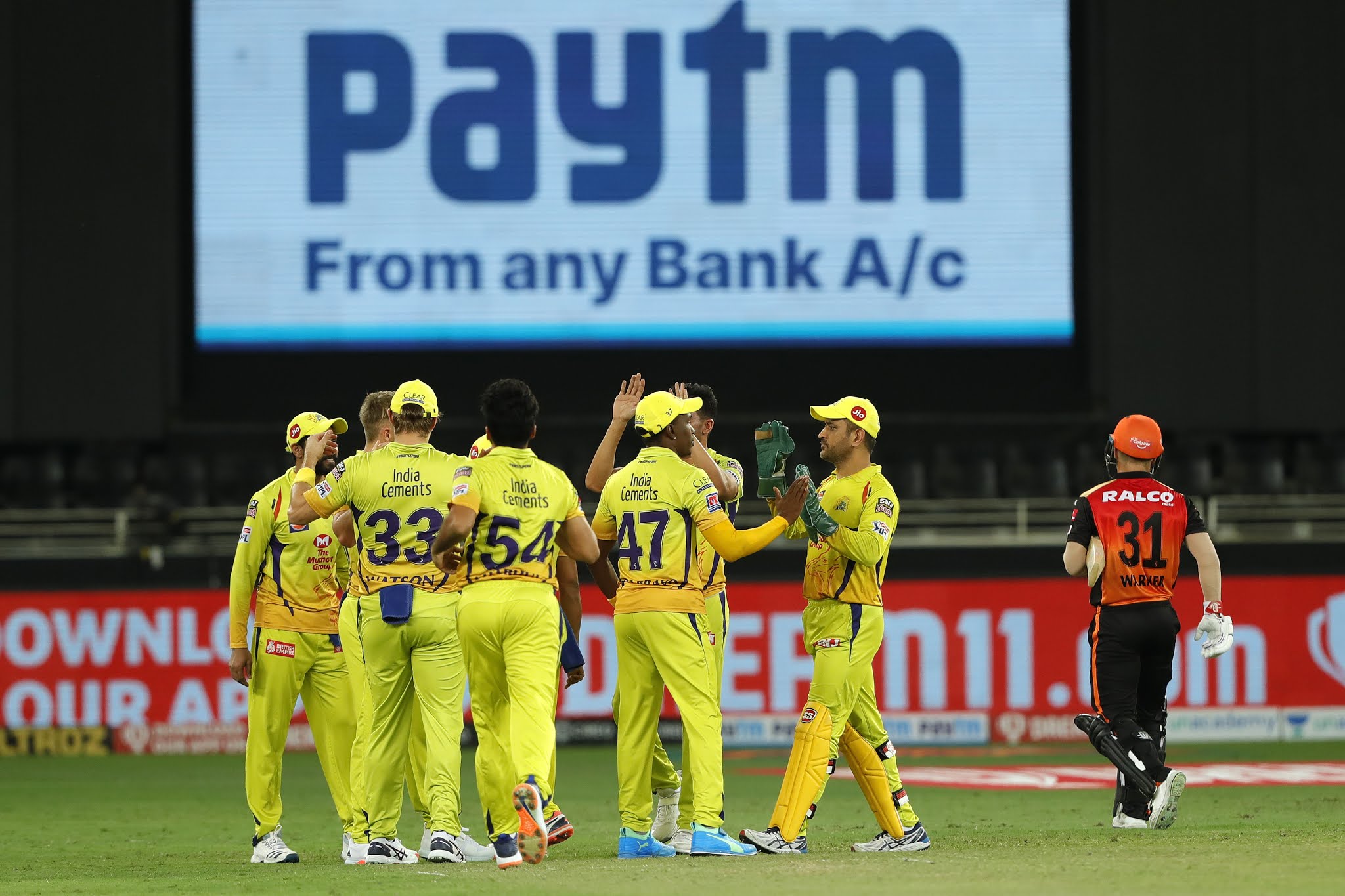 There was an open display of anger and disappointment. Some helmet throwing and animated discussions.

This is what a win meant for MS Dhoni tonight. Even the umpire succumbed to his wrath as he pulled out in the process of declaring a wide after Dhoni went furious from behind the stumps in the penultimate over.

Back in 2010, CSK were in the exact same spot. Languishing at seven after two wins at the half-way mark. They went to lift the trophy from there. Tonight they seemed like the CSK that others respect and fear.

There was intent from the get-go. In an attempt to break the boundary draught in the Powerplay, CSK opted to send Sam Curran to partner Faf du Plessis at the top.

The move worked as he played a 31-run cameo off 21 balls. Each of the batsmen to follow, from Shane Watson at three to Ravindra Jadeja at six, contributed as CSK put up 167. This was their third-highest total this season.

Like with the bat, Curran dominated the Powerplay with the ball as well, sending back SRH’s most prized possession, David Warner, early. After Manish Pandey fell to a suicidal run-out and Ravindra Jadeja castled Jonny Bairstow, SRH looked down and out.

The only one standing between CSK and an imminent win was Kane Williamson who played the best knock of the game. Notching up 57, he married caution and aggression, mixed boundaries with intensive running to keep SRH in the hunt.

Williamson’s innings left SRH needing 67 in the last five overs. Dhoni continued to spring in surprises. Having not bowled at all in the match and other options available, CSK started the death over phase with Piyush Chawla, who had replaced N Jagadeesan in the XI. He paid them back with an eight-run over.

Vijay Shankar dispatched Dwayne Bravo for a six on the first ball of the next over to raise some hopes for SRH. However, he was taken at deep backward point two balls later.

Williamson then hit two boundaries, either side of his half-century. In a rare error in judgement, he slog-swept Karn Sharma on the second ball of the 18th over but could not clear long-on.

Underutilised with the bat so far, Rashid Khan started with a six and a four against Sharma. The six over long-on and the four reverse swept over backward point.

It was the last ball of the over that was overpitched by Sharma with fielder a lot squarer for a shorter ball that instigated Dhoni's anger. Shahbaz Nadeem – who came in for Abhishek Sharma today - obliged with an easy hit over extra cover to reduce the target to 27 of the last two. Even after he was done for the day, Dhoni called upon Karn to give him an earful.

Shardul Thakur and Bravo then bowled two incredible overs that went for six runs in total while fetching two wickets as well, including that of Rashid.  Both executed the yorkers, Thakur wide of off and Bravo on the stumps to hand CSK a victory that seems easy in the hindsight. 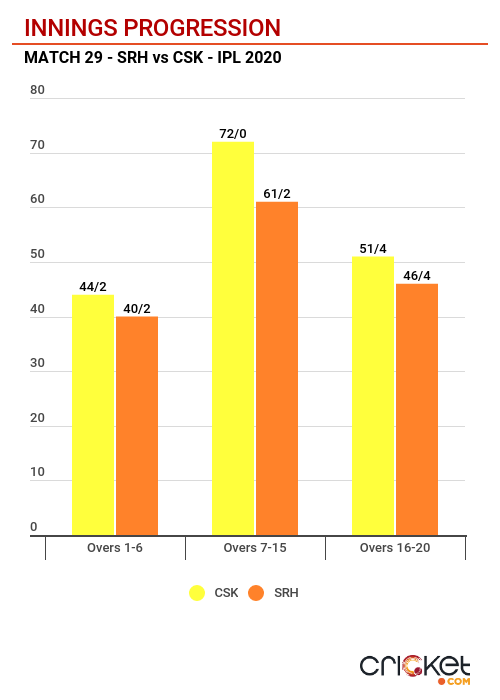 Barring du Plessis and Bravo, it was a decent night for the CSK veterans and their apprentice, Curran. More than a handy batsman, Curran did not start with senseless slogging. While keeping all the strike in the first two overs, he had a watchful start.

The change did not devoid CSK off a poor start. Getting the strike for the first time on the first ball of the third over, du Plessis committed early to a Sandeep Sharma inswinger and got an outside edge through to the keeper.

Curran decided to open his shoulders in the next over against Khaleel Ahmed. Pulling the ball in front of square, he hit him for two sixes and two fours in a 22-run over, the most productive for CSK in this season so far.

Just when the move seemed to be working for CSK, Sharma cleaned up Curran with an inswinger from around the wicket. To a ball bowled at a length, Curran failed to cover the line.

After Curran's departure, CSK's scoring rate tanked. In the five overs after the Powerplay, Watson and Ambati Rayudu added 30 runs.

There were a few aggressive shots to start with. First when Watson clipped T Natarajan to a six to the backward square in the seventh over. With better luck, Nadeem could have had his first wicket in his second over, the seventh of the innings. But, Jonny Bairstow failed to hold on to a nick. To add to Nadeem's misery, Rayudu punched him for a four on the offside next ball.

After Rashid came into the attack, the two batsmen went into a shell and restricted themselves to rotate the strike. A life to Watson then infused some intensity into the innings. Pandey added to his list of drop catches this seasons, as he failed to keep his fingers underneath the ball at long-on, despite a valiant effort.

Rayudu, facing the next ball, responded with a six over the bowler. Watson then threw caution to the wind against Rashid as well as he hit for three sixes in his last two overs. Two of these slog-swept on the leg side and one by dancing down the track and hitting him over his head.

CSK did not start the death over phase on a high note, as both batsmen in the set pair departed in consecutive overs. They lost their wickets in a similar fashion, mistiming a full toss to a left-arm pacer to long-off. Both fell on nearly identical scores of 41 and 42 as well. But, this was not before a calculative 81-run partnership that gave CSK enough leverage to attack at the end.

And attack they did. Not able to impart his characteristic power on the stroke, Dhoni collected two fours off two full tosses from Natarajan in the 17th over. After warming up, he hit a half-volley from him to a 102-meter six into the stands in the 19th over. Mistiming a low full toss again, Dhoni fell on the next ball after adding a 13-ball 21.

Like du Plessis, Bravo too fell on a golden duck, cleaned up by Khaleel on the first ball of the 20th over. However, Ravindra Jadeja ruined Khaleel's figures after hitting him for a six and a four in the over as he bettered Dhoni to score a 10-ball 25.

This season, Warner has not been at his fluent best, striking at around 110 against pace. After a tentative stay at the crease yet again, he inside-edged a full ball at the stumps to his pads which lofted in the air for Curran to pouch himself.

Pandey's misjudgement delt his side a second blow in the same over. Opting to run after hitting a perfectly timed drive to extra cover, Pandey realised his worst horror after Bravo collected the ball and hit the stumps in one swift action.

Williamson then stabilized the SRH innings along with Bairstow. He hit a boundary in each of the next over from Deepak Chahar and Curran.

Once CSK spinners took the centre-stage, SRH toiled on and added 24 runs in the five overs after the Powerplay. Adding to their worries, Jadeja used the grip in the pitch to good effect to beat Bairstow on the inside edge.

While runs continued to be hard to come by, Williamson hit some splendid shots. Playing with the turn, he hit Jadeja for two consecutive boundaries in the 12th over. For the first, he waited to hit him over extra cover. For the second, he went to the pitch and unleashed an inside out shot to the right of long-off.

Both Priyam Garg and Williamson welcomed Bravo with a boundary each behind the wicket on either side in the over. Just when the acceleration seemed forthcoming, SRH lost another wicket as Garg slog-swept Karn Sharma to deep midwicket in the next over.

SRH missed firepower with the bat towards the end yet again. While SRH hit 13 fours, one more than CSK, the Super Kings won the power battle with nine sixes as compared to SRH’s two.

With three wins in eight games, both sides find themselves in a similar position. However, CSK will be on a high after a commanding win while SRH have two consecutive losses under their name now.