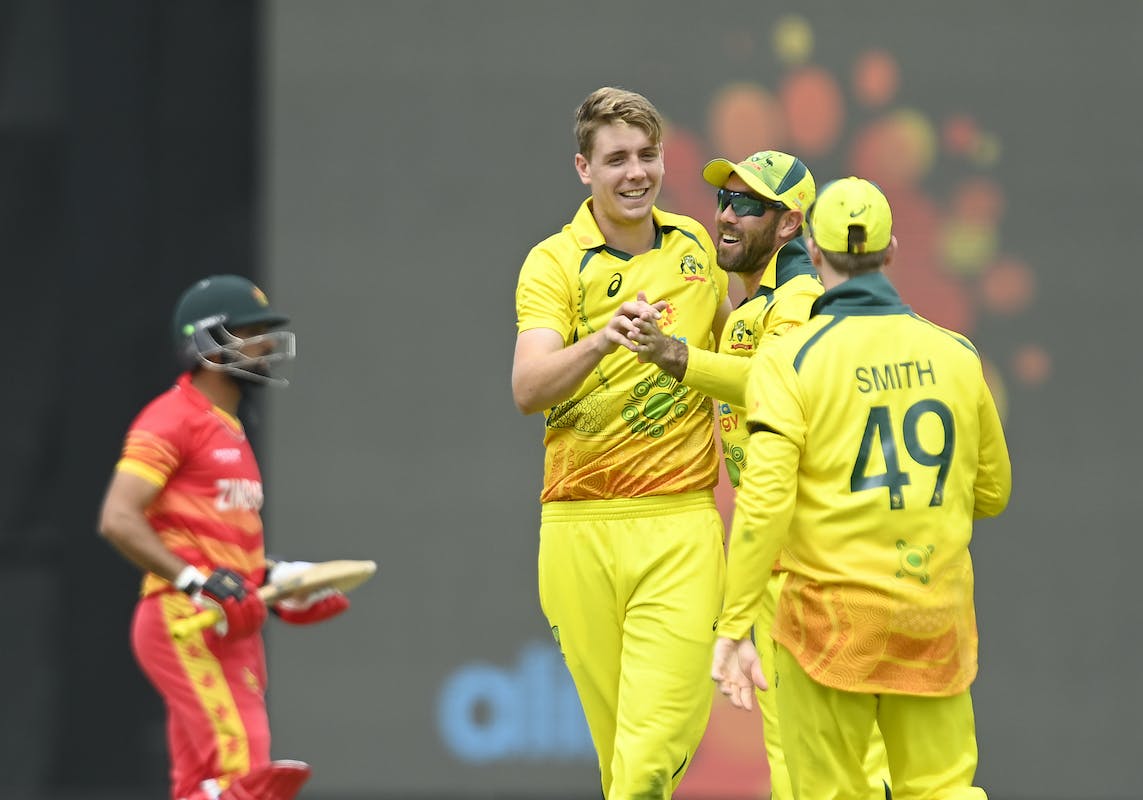 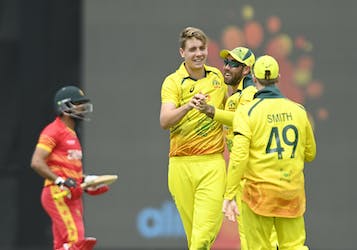 Glenn Maxwell smashed an unbeaten 32 off nine balls to take Australia to an easy five-wicket win over Zimbabwe in the first of three one-day internationals at Townsville's Riverway Stadium on Sunday.

Chasing 201 for victory, the Australians reached their target with more than 16 overs to spare to take a 1-0 lead in the three-match series.

All-rounder Cameron Green ripped out the Zimbabwe tail with 5-33 as the visitors collapsed from 185-4 to 200 all out, a total that was never going to be enough against a full-strength Australia.

Australia captain Aaron Finch and David Warner started the run chase positively, scoring at six runs an over until Finch played on to Richard Ngarava for 15, with the score on 43, continuing his recent run of poor form.

Warner was joined by Steve Smith, and the pair cruised to 78-1 when Warner was dropped at backward point off Sikandar Raza. The left-hander rode his luck and raced to 57 before being bowled by Raza to leave Australia 108-2 in the 23rd over.

Despite a stutter as Alex Carey, Marcus Stoinis, and Mitchell Marsh fell to Zimbabwe's spinners Raza (1-45), and Ryan Burl (3-60), the steady Smith and bludgeoning Maxwell saw their side home without further alarm.

Smith accumulated 48 not out off 80 balls while Maxwell clubbed 32 off nine deliveries faced with three fours and three sixes -- two coming from the last two balls -- to race to the target.

Finch said it has been difficult playing against unfamiliar opponents, with Zimbabwe playing their first series in Australia since 2004. "You do your due diligence beforehand and watch a lot of footage, and when you get to the ground in the morning, you watch a few actions to try and get a feel of what you might be facing in the middle," he said.

"I thought we did that really well, and I thought our bowlers executed exceptionally well," he further added.

Zimbabwe scored steadily in their innings, but only opener Tadiwanashe Marumani, who scored 45, and Wessly Madhevere, with 72, were able to get on top of the Australia attack.

The visitors would have been hoping to reach at least 240 to set a challenging target, but the tail had no answer to the pace of the towering Green as they lost their last six wickets for 15 runs to be all out in the 48th over.

Zimbabwe captain Regis Chakabva conceded that his side's batting was below par. "I thought that the wicket was a little bit tricky early on, and I thought the boys did well to soak up the pressure, but we just didn't have enough runs on the board," he said.